What the Saudi leaks tell us

An interview with Julian Assange.

Since June 2015 WikiLeaks has been releasing details of leaked cables and other documents that come from within the Saudi Foreign Office. They provide an insight into the internal workings of the secretive regime, its fears, and its strategies for spreading its influence abroad. More than 230,000 leaked Saudi documents have been published by WikiLeaks; a batch of 60,000 more cables and 50,000 pager messages was released last November.

Here are some things the leaks show us, according to Assange:

‘What comes across from the cables is a small cloistered, intellectually isolated ruling elite with a paranoid worldview.

‘The cables make it clear that this is a small ruling elite with weak institutions such that a power structure can be taken over by other elements in that elite very quickly and instruments of state can be subordinated according to the will of the leadership.

and the one that is most natural for Saudi Arabia to pick is Iran. Yes, there are genuine reasons for rivalry in the region, but they are inflated in the internal culture in order to keep it coherent and unified. ’

2 Moves to destabilize Syria prior to uprising*

‘There is one high-level Saudi cable offering Saudi strategy in relation to Syria. The concluding paragraph says that the Assad regime will never forgive Saudi Arabia for what it has done to Syria. Because the Assad regime is “brutal and belligerent” it will always be after revenge. As a result it is a threat to the national security of Saudi Arabia.

‘One cable from the Saudi foreign ministry speaks about a confidential agreement [in 2012] between Saudi, Qatar and Turkey in relation to intervention [to topple the Syrian government].

‘In a US cable we published from 10 years ago William Roebuck, the US ambassador to Syria, outlines a smörgåsbord of proposals for destroying the Assad government. It included trying to make it paranoid so that it overreacts and believes that its military forces are engaged in a coup against it; trying to make Sunni Syrians paranoid about Iran and Iranian-backed Shi’a wanting to convert Sunnis; and that it [the US] was going to try and work with Saudi and Egypt to increase these sectarian divisions. ’

‘One cable talks about the necessity of having the Saudi supreme religious leader say something to back up the government position. It’s not written as “I wonder if he would do it” but rather: “Tell him to do it”. What comes through the cables is that religion is a tool of the state. It’s clear that Saudi Arabia sees Wahhabi Islam and Sunnis as fertile ground for state interest.

‘The Saudi cables show that Wahhabism is a tool of Saudi Arabia as a regional hegemon that it tries to deploy not only in its own region but worldwide. It sees Sunnis as a potential source of converts to Wahhabism, or something close to Wahhabism. It sees Shi’a communities as places where it has no traction, but Iran has. ’

4 Terrified of Iran and Shi’a influence

‘The Saudi regime is exquisitely paranoid in relation to Shi’a influence. There are indications that they are terrified of Iran but there’s no evidence of something they should be terrified of.

‘The battle with Iran they perceive to be a fight against Shi’a Islam. The Shi’a population is quite small globally. But Saudi Arabia is trying to check the growth of Shi’a Islam and reduce its influence.’

5 How to bribe foreign media

‘The cables show that Saudi embassies bribe Sunni or Arab media in foreign countries to take control of the discourse in relation to Saudi Arabia and its interests. They do this through direct investment: for example, by buying up a million dollar shares in a Lebanese TV station or establishing relations with journalists; buying up thousands of subscriptions to Arabic language magazines in order to tilt their coverage. It’s a clever trick because they don’t need any existing relationship or any intermediary. The Saudi foreign ministry just buys thousands of subscriptions, up to half the total in some cases. If they like what they write, they buy more; if not, they nose it down a bit to give the right signal.’

6 The Saudi-Israel nexus and the West

‘There has been a Saudi-Israeli nexus in the Middle East for at least 10 years. It comes through [in] the US cables we published and to a lesser extent in the Saudi cables. Saudi considers Syria a mechanism of Iranian influence; Israel is occupying the Golan Heights which is part of Syria.

‘But the US relationship to the Israeli-Saudi nexus is changing. The smart US strategists, including the head of the CIA, are of the view that Saudi and Israel are getting in the way of broader US strategic interests.

‘We published some of CIA director John Brennan’s emails from back in 2008-09, when he was security advisor for Obama. Brennan says that the US should engage with Iran. The US being so adversarial with Iran has reduced its influence in the region; the Israeli-Saudi nexus is cramping its operations.

‘The US has not been as mindful of Saudi wishes as before. That has increased Saudi paranoia; it does not feel it has the unqualified backing of the US in the way it had. Europe takes its cues from US policy.

‘I would not take [this shift away from Saudi] too far: the US and British arms industries are major recipients of Saudi money as are banks, and the British property market.’

‘There is some interesting traffic in relation to deals done for UN votes that reveals that the UK did a vote-swap with Saudi to get Saudi onto the Human Rights Council.

The offer to the UK from Saudi included $100,000 to the section of the FCO [Foreign & Commonwealth Office] that deals with who should be elected to the human rights council. It’s there in the cables, for “the campaigning expense that the FCO will need” to make sure that Saudi is elected to the HR council. Saudi ended up with the support of over 100 countries, so between bribes and vote-swapping that’s what it gets. There are a number of cables on how Saudi manages the UN and payments going to officials, dressed up as “assistance to your programme”. ’ 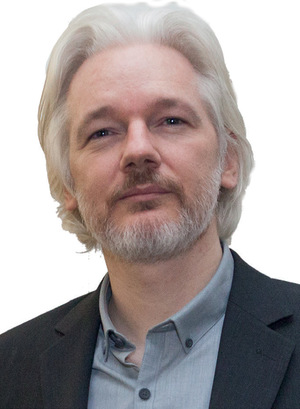 Julian Assange has been detained in Britain for five years, unable to leave his place of refuge in the Ecuadorian embassy without risk of being arrested and extradited to the US, which wants to try him for espionage. He is also unable to receive the hospital treatment he needs. ‘It’s tough,’ he comments. ‘But a super-max [prison] in the US would also be tough and I would not be able to work there.’ He adds: ‘Saudi has started a high-level criminal investigation into the cable release; it plans to put anyone distributing them in prison for 20 years. So we joke that we are much better off accepting extradition to Saudi Arabia because it’s only 20 years, whereas the US is gunning for over half a century...’

In 2014 Assange and his lawyer filed a case in the UN for unlawful and arbitrary detention, under international law and the covenants Britain has signed up to. In February this year the UN Working Group on Arbitrary Detention ruled in his favour.

Oil on the skids
Gambling with ISIS and Co