Dalits and Adivasis protest their unequal share in 2016 budget

The new scheme lacks understanding and will continue to marginalize the most vulnerable, writes Mari Marcel Thekaekara. 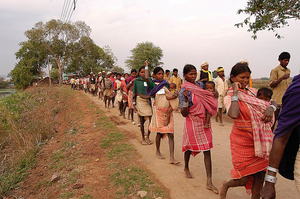 Budgets all over the world roll out with regular monotony. Almost as regularly, they fail to excite us. India has seen a great deal of hype about how the country will soon see 'Acche din' or 'good days', after voting in the current government. Two years down the line, voters feel cheated and let down, especially so because of the unprecedented hype before the 2014 elections.

All politicians promise the earth before an election, and voters who've seen it all several times before, are a cynical lot anyway. The BJP though has mastered the art of spin. So the billboards, advertisements and larger than life projections of the Supreme Leader at a national level, were unprecedented. So the bigger the noise, the more disappointing the failure to deliver.

Dalit leader Paul Divakar telephoned me complaining about the treatment of dalits and adivasis in the 2016 budget. He explains:

‘Though we applaud the allocation of $74 million under the stand-up India scheme for dalit or Scheduled Caste (SC) and Scheduled Tribe (ST) entrepreneurs, the overall allocation under the SC and ST Sub Plan is extremely poor.

The allocation for dalits under Union Budget 2016 is only 7.6 per cent when the due amount under the dalit sub plan budget should be 16.8 per cent or $13.5 million and 8.6 per cent under the adivasi plan which should be $7 million. Thus denying them a total of $11.3 million. The National Campaign on Dalit Human Rights (NCDHR) condemns this denial in allocation.’

The NCDHR press release went on to point out that the budget comes at a crucial moment, after the University Grants Commission withdrew underprivileged students fellowships and the subsequent suicide of Rohith Vemula, a dalit PhD student, at Hyderabad University. The underlying issue of both these instances has been the denial of mandatory funds to research scholars. Paul Divakar, NCDHR General Secretary, holds the finance minister accountable and asks, ‘Where is the missing $11.3 million? Yet another massive denial and disinterest to bridge the growing development gap.’

Dr. Ambedkar, the dalit leader who wrote India's constitution, argued that public and higher education was critical for the empowerment of dalits. Indeed it is crucial for them to regain their dignity and freedom from dominant class bondage. The access to educational institutions by the historically excluded groups has seen a violent backlash from the dominant community. We are at a historical juncture in Indian history.

The events of the previous months – denial of fellowship money to PhD students in Hyderabad and other universities, dalit students' suicides – are an example of this violent reaction from the dominant community.

The Union Budget 2016-17 is another example. The denial in higher education money allocated for the excluded communities further makes their struggle for equality difficult. Additionally, it is a violation of their constitutionally mandated rights.

Of the total $133 million allocated under the University Grants Commission, 60 per cent goes toward capital assets and another 30 per cent toward grants-in-aid and only 8 per cent directly benefits dalit students. If we analyse the allocation across sectors, over 86 per cent of the dalit budget is spent on social service, welfare and housing. These do not form the triggers for development unlike higher education. The overall growth of the dalit and adivasi communities promises to be very lopsided. Innovation is needed to design schemes for them in consultation with them.

The budget continues to marginalise dalit-adivasi women by allocating a measly one per cent to dalit women and two per cent to adivasi women without taking into account the needs or voices of women. The schemes lack an understanding of their lived reality and is blind to their concerns.

It is a disappointing, dismal scenario. But these are depressing, dismal times.