Tabitha Ross describes how the conflict is affecting women exposed to gender-based violence, and the vital work of one Lebanese organization seeking to combat it. 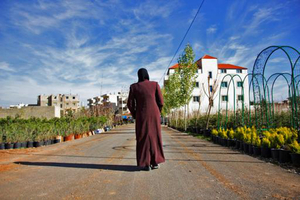 Layan, walks along a road in the Bekka Valley, eastern Lebanon. Layan has been supported by Kafa, a Lebanese organization that supports women who have experienced, or are at risk of, exploitation and gender-based violence.
Photo: Christian Aid / Tabitha Ross

Layan moves carefully, slowly. It’s difficult to say whether this is her natural way, or rather a result of years of beatings that have caused long-term damage to her body. Married against her will, she has suffered extreme violence and trauma at the hands of her husband. He once beat her so hard she was unable to live without an oxygen mask for three years.

A Syrian refugee now living in Lebanon, Layan is sadly one of many Syrian women who are victims of domestic violence.

During times of conflict, everybody is affected by violence. However, women and girls are at greater risk of violence, including sexual and gender-based violence (GBV). This is often owing to a lack of social protection and safe access to services. While sexual violence is widely recognized as a weapon of war, other forms of violence against women during conflict include domestic abuse, sexual exploitation, and early marriage.

For refugees like Layan, she finds herself stuck between a rock and a hard place. From Daraa in Syria, she has been a refugee in Lebanon for three years.

Still recovering from chemotherapy and treatment for the leukaemia she was diagnosed with in 2011, she is reliant on her abusive husband. As a female refugee in Lebanon with poor health, she remains dependent on him for a place to live, schooling for their children, and healthcare costs related to her cancer.

Layan has been supported by Kafa, a Lebanese organisation that supports women who have experienced, or are at risk of, exploitation and gender-based violence, ever since her husband beat her with an iron bar, leaving her blind in one eye for three months.

Kafa’s approach is one of empowerment, providing women who come to their centres with practical and emotional support, as well as the tools they need to build their resilience.

Layan explains, ‘Kafa gave me free legal consultation. I saw the Kafa lawyer and told him the details about how my husband beat me. I had to get a doctor’s report on the medical damage [he caused]. The lawyer took my medical file and medical report to the court, and the judge gave me a protection order to say my husband cannot beat me or the children anymore.’

‘The judge also said that if I want my husband out of the house they can force him to leave and not come near us. But I refused because I need someone to work and provide for the children.’

After years of pressure and lobbying from women’s rights organizations – which Kafa was at the forefront of – in 2014 the Lebanese government passed Law 293, criminalizing domestic violence. It’s a law that applies to everybody in Lebanon, including Syrian refugees.

But while the law has been successfully used to protect victims of domestic violence, civil society groups argue that problems remain with the implementation of the legislation. In the Beqaa Valley, one of the poorest areas of Lebanon and now home to the highest number of Syrian refugees, Lebanese and Syrian women struggle to benefit from the protection Law 293 ought to provide.

As well as not knowing of the law’s existence or how it applies to them, Syrian refugee women often lack the documentation evidencing their marriages (many having left their homes in haste), which disqualifies the application of Law 293 to them. Furthermore, most refugees lack the financial means to bring a case to court, while the lack of legal status for many Syrian refugees acts as a major impediment.

That’s why Kafa’s work is so vital. With funding from Christian Aid, they run a listening and counselling centre in the Beqaa Valley, which practically and emotionally supports women who have experienced GBV. As well as raising awareness of Law 293 and legal procedures related to marriage registration, they provide free legal advice and services.

Since the start of the Syrian conflict, the centre has seen a huge increase in the number of women seeking to benefit from the legal and psychological support it offers.

For women like Layan, it’s been a lifeline, ‘I regularly see the psychotherapist at Kafa. She makes me feel more comfortable, more confident. I feel better now and I can see some hope. Coming to the centre [provides] a change of atmosphere and a moment when the pressure is lifted. In the small group sessions I feel secure. I’ve made new friends – Syrian and Lebanese women with similar problems. I can talk to them.

‘Kafa helped me to get out of the awful situation I was in. I feel that there are people who care about me, and who worry about me.’

Kafa is a Lebanese organization that works to eliminate all forms of exploitation and violence against women, and create a society that is free of social, economic and legal patriarchal structures that discriminate against women.

With the arrival of Syrian refugees to Lebanon Kafa now serves some of the most vulnerable Syrian women and girls facing sexual and gender-based violence in Lebanese society. At their centres in the Bekaa Valley they provide women and girls with counselling (group and individual), awareness raising, drama, music, art and dance therapy. Christian Aid is funding one of their listening centres in in the Beqaa Valley through the Syria Crisis Appeal.

Tabitha Ross is with Christian Aid. The organization has committed to making a significant contribution toward a reduction in gender based violence in its Gender Justice Strategy, working directly with faith leaders and specialized partners in various country programmes such as DRC and Iraq. Christian Aid is a signatory to a Call to Action, an initiative bringing together Governments, UN Agencies and NGOs to protect women and girls from GBV in humanitarian emergencies.

If Google and Facebook can flip elections does code now rule the real world?
Calculating the environmental benefits of peace in Colombia