Our pain and rage are immense, but we need reason and understanding more than ever, Frank Barat writes. 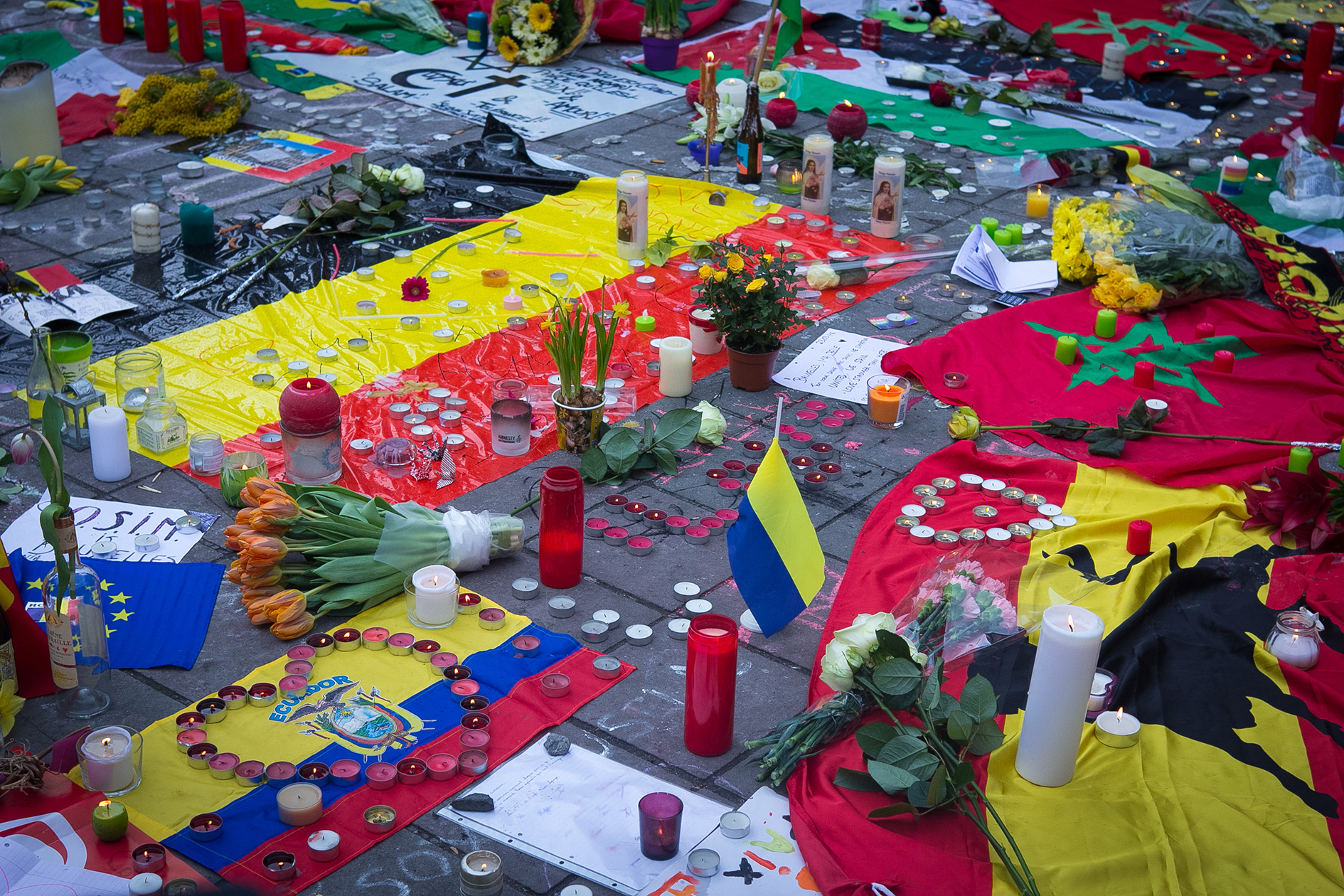 Gathering at the Bourse, in honour of victims of terrorism, Brussels 23 March 2016.
Photo: Valentina Calà

The second day of Spring in my hometown, Brussels, started like any other day. I took the kids to school and nursery this morning, then went to work. Or, rather, came back home, where most of my work is done these days. For two years, I’d been working at offices near the European Parliament, but I prefer working from home now, especially in days like today: The sky is blue and the sun is shining. Sitting in front of my computer, I looked outside at the trees, listening to the singing birds.

Then my brother called.

He had just taken a couple of good friends to Brussels’s Zaventem airport. They were already on their plane, waiting on the tarmac, when they heard two loud bangs at around 8am. They jumped in their seats. ‘Nowadays, you get scared from so little,’ they joked to one another. What they did not know was that Brussels National airport, a few dozen yards away, had just been hit by suicide bombers and that many, many people, were already dead or seriously injured.

I switched on the TV, and, like most people in these situations, got glued to it. The images and the videos started to appear on mainstream media feeds, battling and fighting to be the first one to show ‘the horror’, ‘the panic’ and ‘the destruction’. The Belgian police and government decided to be extremely cautious. ‘We cannot say yet that this was a terrorist attack.’ The mainstream media followed the same line. Everybody else knew that, caution or not, Brussels had just been victim of what will turn out to be the biggest terrorist attack in the city’s history.

A few minutes later, news arrived that an explosion had just been heard at Maelbeek metro station, in the European Quarter, very close to where I used to work and to where many of my former colleagues and friends still exert their professions. I spent the next few hours answering calls, emails and messages to tell everyone that I and my family were safe, while at the same time trying to find out if all my friends were okay too. They were. Unfortunately, many others lost their lives, 34 at the time of writing, and many more – hundreds more – were injured, some seriously. While there has not been any official confirmation of the perpetrators, the New York Times has reported that ISIS has claimed responsibility for the attack.

My oldest kid is five-years-old. Since the Paris attacks a few months back, he has been repeatedly asking questions about the meaning of the words ‘terrorism’, ‘massacre’, ‘army’ and ‘bombs’. He has noticed the presence of soldiers in the streets of Brussels in the past days. Coming back from school the day after Saleh Abdelsam was arrested, a few miles from where we live, he watched the helicopters circling the blue sky above us and police stopping people on the streets. ‘We are lucky to have them’, he told me, ‘because the others wanted to kill us’.

I thought of something to say for a moment, then looked at him, and changed the subject. Deep down, I knew that as long as we bury our heads in the sand, as long as we do not face a problem that seems more existential by the day, what happened in Brussels on Tuesday, will happen, again and again, more ferociously, everywhere in the world. I think of it like I think of global warming. If you do not try to understand where it is coming from, and try to fight it, at its roots, try to make the sacrifices it requires and the changes it needs, the storms will become more fierce and the hurricanes and the tsunamis will destroy everything in their paths.

To stop this drift towards self-destruction we, as a human race, need to ask the tough questions, and speak truth to power. We, collectively, need to ask ourselves why some young men and women, born and raised in Brussels, with family and friends here, many with jobs and even businesses in the city, turned into terrorists and suicide bombers, very often in a matter of a couple of years. Despite the rage that we are feeling today, we must try to think rationally and try to understand, which is very different from condoning, what led them to commit such terrible and heinous crimes. It will not help anyone, and it will definitely not save future lives, to be hateful ourselves, to ask for revenge and demand ‘an eye for an eye’. The perpetuation of the cycle of violence has to stop. The racist rhetoric of ‘they do not love life the way we do’, is utter nonsense and needs to be carefully refuted.

Today’s attackers embarked on a path towards death, but when they woke up this morning, the sun was shining and the sky was blue for them, too. The terrible crimes they committed may have made sense to them, and to their twisted vision of the world, but I struggle to believe that anyone could kill another human being for fun, for the sake of it. Their journey from disfranchised youth to murderous terrorists is one that we need to study, seriously, step by step, to move forward and hope for a better future for society as a whole.

If you read the ‘biographies’ of the Charlie Hebdo, the Bataclan, and the Brussels attackers, one similar fact keeps popping up: their extreme and fast process of radicalization started in prisons, not mosques. As such, it is time for us to address what Angela Davis calls the Prison Industrial Complex. The evidence is compelling that prison definitely does not ‘heal’ people or help them re-integrate into a society that has often failed them. Quite the contrary. It is also time to look at the policies of European governments towards immigrant youth, who are very often, from the earliest age, vilified for every problem their societies face.

We need to speak truth to power. We need to challenge our governments and the decision-makers every step of the way. For our own sake.

If you look at what happened in France and Belgium, if you study all the footage and read all the media reports and analyses, you will realise most of them focus on ‘security’, ‘militarization’, ‘hitting back’ and ‘war’. Only a few are concentrating on what the terrorists said or wrote. Why did they do it? What did they say while doing it? If you read these – not something you’ll find easily with a Google search – you will realise that all the attackers are talking the same language. They were politically educated out of the destruction of Iraq, the invasion of Afghanistan, the drones bombing in Pakistan, Yemen, the torture of Guantanamo Bay and Abu Ghraib and the colonization and occupation of Palestine. While most identified themselves as Muslims, they also said they were horrified by the ideological war the West has carried out against what it wrongfully calls ‘the Muslim world’. This is the main motivator behind them becoming killers. ‘Your wars, our deaths’ became a slogan after the Paris attacks. It might not be totally accurate, and we definitely cannot simplify things, but there is a lot of truth in it.

What is certain is that the people in power, despite telling us that they want to protect us, actually care very little about the safety of their citizens. The response of the Belgian authorities following the Charlie Hebdo and the Paris attacks was to put thousands of soldiers on the streets and raise the security alert. Despite this, and the massive and pretty much unlimited funding that the intelligence services enjoy, two of the most obvious targets for terrorists, an airport and the metro system, were hit. It can only be called what it is, an utter failure on their parts, both in their overall strategy and in the specific response they adopted to ‘defeat terror’.

We know, for example, that the real people fighting ISIS at the moment are the Kurds in Kobane and other cities. We know that helping and supporting them, while cutting the route of ISIS’s oil to Turkey, would deal a huge blow to the so called Islamic State. Are we doing it? Not at all, quite the opposite in fact, supporting Turkey, a key actor, despite its murderous policies on the ground. We also know the role that Saudi Arabia, one of the most repressive states in the world, plays in the region, through its funding of corrupt and dangerous ideologies. Are we doing something against it? For sure we are, France just gave the future Saudi King, Mohammed Ben Nayef, its highest honour, the ‘Legion d’honneur’ a few days ago. These constant double standards, and the lies our governments offer in their defence, need to be challenged. They create rancour and hate.

Otherwise, what will I tell my son next time?

Frank Barat is Coordinator of the Russell Tribunal on Palestine, and the author of ‘Gaza in Crisis: Reflections on Israel’s War Against the Palestinians’ with Noam Chomsky and Ilan Pappe. His new book, 'Freedom Is a Constant Struggle: Ferguson, Palestine, and the Foundations of a Movement', with Angela Davis, is out now. He tweets at: @fbarat1

This article is crossposted from Ceasefire.

With no UN to watch, Saharawis fear Moroccan regime
Drowning in liquid filth – in 21st century India
Back