With no UN to watch, Saharawis fear Moroccan regime

Local activists are expecting a brutal crackdown from the police, writes John Richards. 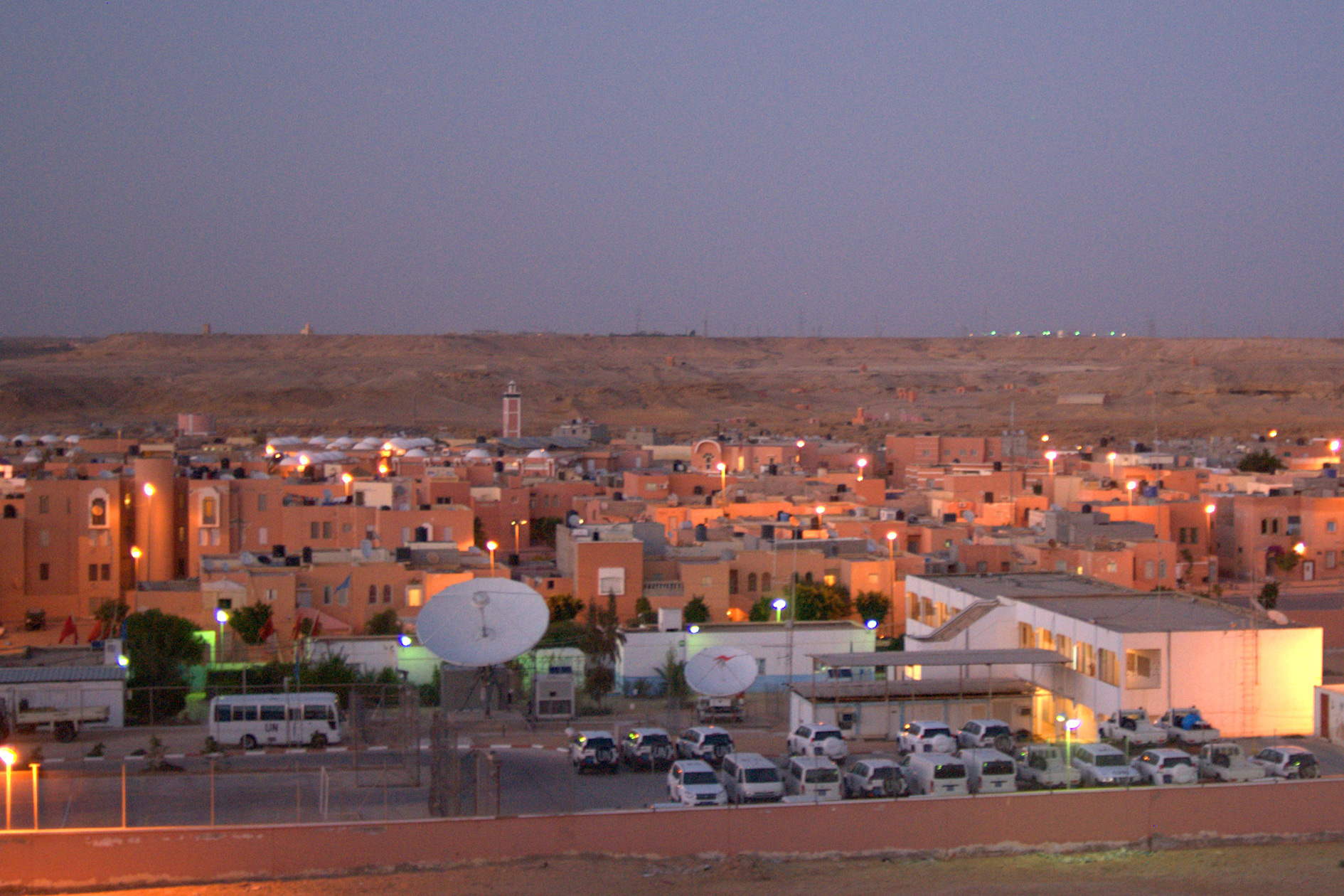 UN staff have been expelled from MINURSO's headquarters in Laayoune.
Photo: Guillaume Galdrat

After Morocco expelled civilian UN staff from MINURSO mission in the occupied Western Sahara, local activists are expecting a brutal crackdown from the Moroccan police. The Saharawi army is on alert, ready to protect them.

Ban Ki-moon, the UN Secretary-General, visited the Saharawi refugee camps in western Algeria in early March to support a peaceful solution of the 40-year-long conflict. But as he spoke of the Moroccan ‘occupation’ of Western Sahara, a term so far avoided by the UN, he has rather increased the chance of a resumption of war.

After Ban’s visit, Rabat unprecedentedly threatened to expel UN staff from Western Sahara (which Morocco considers its land) and halt its voluntary contribution of $3 million to MINURSO, out of the mission’s budget of $53 million. While legally allowed, it is unusual for a country pretending to be a trustworthy international actor to act so abruptly.

The official order for the UN staff to leave the occupied territory was issued on Thursday with a three-day notice. The last of the 83 civilian staff departed on Sunday. One remained in Laayoune, the capital of Western Sahara and the seat of MINURSO, because she is pregnant.

The departure of the UN civilian employees leaves MINURSO crippled. It has already been one of the weakest UN mission ever to be deployed, but nonetheless its presence disciplined the police.

‘The regime will get more brutal now, I am absolutely sure about that,’ says one Saharawi activist.

‘They attacked people and there are many injured, more than 20 seriously,’ adds the Saharawi.

The brutal crackdown in the occupied part of the country led to a quick response from the Saharawi government, which has its seat in refugee camps and controls a quarter of the contested territory.

‘Saharawi army leadership had a meeting in the liberated area of Bir Lehlu and put the Saharawi army on alert,’ explains one refugee who lives in the camps.

Despite the Saharawis’ pleas, MINURSO remains the only UN mission without a mandate to monitor human rights. Such a mandate is strongly opposed by Morocco, with the tacit support of its allies, crucially the US and France, both veto-holding members of the Security Council.

As a result of that, MINURSO’s staff has so far been silent on the widespread abuses in the occupied territory. Both Human Rights Watch and Amnesty International criticize Morocco for its brutal treatment of the Saharawi activists. Their peaceful protests are violently dispersed by the police, as documented by videos, thanks to local activists.

So far the Moroccan police have relied on beatings, intimidation and denying access to international observers, but stopped short of killing or ‘disappearing’ the protesters. Most of the Saharawi activists have also been released from the Moroccan jails – some, such as a local leader Sidi Mohammed Daddach, have spent years on death row just to be pardoned without a word. (Daddach, incidentally, has been beaten in the past few days at a protest in Laayoune.)

MINURSO’s presence, despite the lack of human rights-monitoring mandate, deterred Morocco from a heavier crackdown.

The mission was set up to monitor a ceasefire between Morocco and Polisario, a left-leaning independence movement. The war started in 1975, when Spain ceded its phosphate-, fish- and possibly oil-rich colony to Morocco in a secretive and illegal deal. Polisario declared independence as the Saharawi Arab Democratic Republic. The Saharawi fled to Algeria, set up refugee camps and fought a partisan war. Morocco built a 2,700-kilometre-long wall across the desert to ward off their raids.

In 1991 the UN brokered a ceasefire, promising to hold an independence referendum. Such a vote was proposed in the 1970s, when the international community agreed that Morocco holds no historical right to the territory. But the sides have been unable to agree on a list of eligible voters.

MINURSO’s main task is to facilitate the referendum (the ‘R’ in the name comes from the word itself), but in the last few years little has been achieved. The mission’s mandate is renewed annually by the UN Security Council at the end of April.

The current row undermines the future of MINURSO. Around 240 uniformed personnel remain on the ground, monitoring the ceasefire along the wall separating the occupied and liberated territories.

When the mission’s mandate is up for renewal, the Saharawis will yet again call for its broadening to include human rights monitoring. The return of the civilian staff to Laayoune will be a hot topic – without them, the military component of the mission is not able to function and effectively the mission could be shut down.

But the fight in the UN’s headquarters in New York, important politically, will be bloodless. The situation on the ground will not.

In the absence of the UN, the Moroccan police will get more brutal. That will wind up the spiral of anger – the Saharawi will protest more and their demonstrations, consistently peaceful for the last 25 years, may soon turn violent.

On the other side of the wall, the young refugees have been calling for a return to arms for few years now.

‘Saharawis are now waiting until the UN Security Council meeting in April. They will either get satisfied if the decision clearly pushes for a solution, respecting the right to self-determination. Otherwise, more frustration will arise, particularly among youth who are now putting huge pressure on Polisario to take a more radical option,’ explains a Saharawi source from the refugee camps.

If a stray bullet is fired in Laayoune or at the border, or an over-eager police officer beats an activist to death, there will be no turning back from the war.

MINURSO has failed to conduct the referendum or protect the rights of the Saharawi, but at least maintained the ceasefire. If a part of the mission’s staff is out and its mandate is not extended, left alone narrowed down, there might be yet another war in the Maghreb.

John Richards is a pseudonym.

Calculating the environmental benefits of peace in Colombia
The Brussels Attacks