‘Acts of solidarity are what make us human’

Though facing overwhelming struggles of their own, teachers at the NUT conference in Brighton have been showing a true spirit of internationalism, writes Jo Lateu. 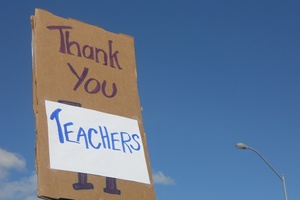 Teachers in England and Wales could have been forgiven for concentrating on matters of immediate concern to their profession at this weekend’s National Union of Teachers (NUT) conference in Brighton. After all, they are facing an unprecedented number of challenges, from the proposed forced ‘academization’ of all schools, to austerity-justified job and resource cuts, to the ever-increasing pressure (on both teachers and pupils) of a treadmill of standardized testing driven by ‘educational’ businesses whose interest lies not in supporting the growth and development of children but in the growth of their own bottom lines and pay packets. Not to mention the fact that teachers are now being forced to spy on their own pupils in the name of anti-terrorism.

Of course, the delegates did want to discuss these things. As Jessica, a teacher from Lambeth, said: ‘we are working in a climate of fear.’ There is real anger at what is happening in our schools, and the impact this is having on the mental and physical health of teachers and students. Some speakers were so upset as they talked about their pupils (as young as four) being put through test after test after test and being told time and again that they ‘were failing’, or who had attempted suicide because of exam pressure, that they were reduced to silence, or tears.

Yet many of the discussions at this year’s conference have focused on wider educational and social issues, in Britain and abroad – from support of the NHS junior doctors’ strikes to a call for Bahraini activist and teacher Abu Dheeb to be freed from prison; from demands for more housing for low-paid workers in London to support for disability rights.

‘Acts of solidarity are what make us human,’ said one teacher, part of an NUT delegation that has been over to the refugee camp known as the Jungle in Calais, to give lessons to asylum seekers. She will be heading back there tomorrow to spend her school holiday helping those left after the camp was cleared. ‘Equality, solidarity, generosity – that is what unionism is about,’ said David, another delegate. As NUT President Anne Swift said in her inaugural address on Friday evening, the trade union movement is the largest global solidarity group.

‘The trade union movement has a proud history of raising the consciousness of its members,’ said Kayleigh as she spoke on racism and migration. This proud history’s latest chapter was in ample evidence in Brighton. One motion put to the delegates (and approved) sought a change of policy to allow the NUT to support officially LGBT+ asylum seekers, even if they are not teachers. Until now, the NUT could only officially offer solidarity for LGBT+ asylum seekers linked to the teaching profession. But, the motion’s proposer argued, the union should strive to be outward looking and to care about what its members care about. The conference agreed.

‘Linking the fights against racism, homophobia, islamophobia, transphobia – that is being a true internationalist,’ said Michael, a teacher from Redbridge. As Anne Swift called the conference to action – ‘We must not procrastinate, we must activate’ – it is worth remembering that trade unionists are fighting not just for themselves, but for the rights of us all.

Look out for the September 2016 issue of New Internationalist, which will focus on trade unions.

Drowning in liquid filth – in 21st century India
Are US politicians serious about tackling corruption?