The world’s last great woodlands are fast disappearing – with untold consequences for the environment and for us. Time to stop the destruction, argues Wayne Ellwood. 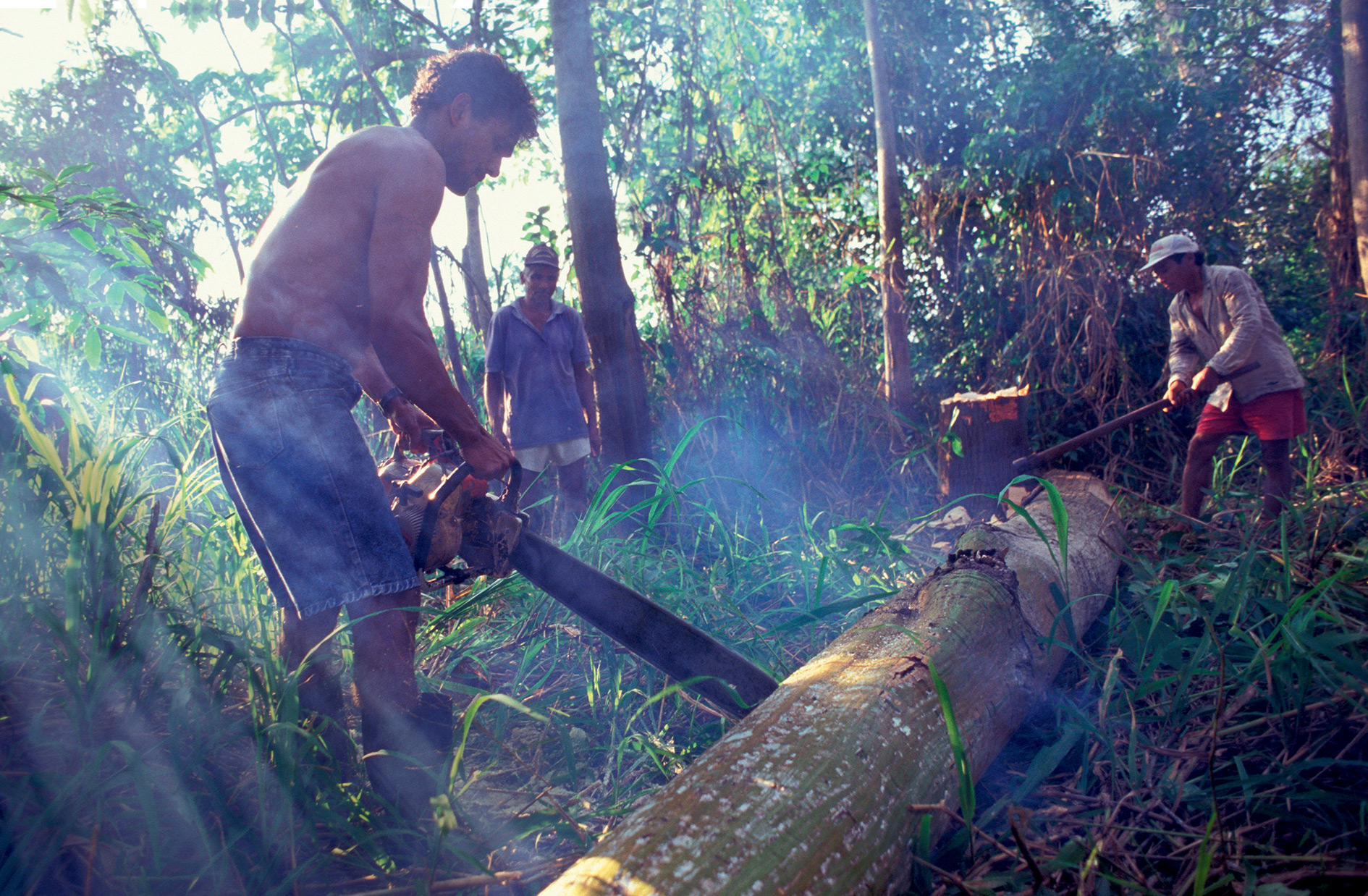 From the air, the earth is shorn and desiccated. Waves of heat billow upward, mixed with plumes of smoke. A few lonely trees stand in relief against the flattened landscape, while knots of cattle clump together in dusty paddocks ringed by barbed wire. This is the Brazilian state of Rondônia, the heart of the Amazon, wedged between the vast state of Amazonas to the north and, due south, Bolivia.

Fifty years ago, Rondônia was swathed in dense tropical rainforest. Today, it is one of the most deforested parts of the Brazilian Amazon. An astonishing 100,000 square kilometres of forest has vanished from the state since 1978. Poor people from the crowded coastal areas, attracted by land and opportunity, flocked here in the 1970s when roads began to penetrate the forest. First came loggers, who harvested the valuable tropical hardwoods; then settlers, who cleared the remaining trees to plant maize and soy; and finally large landowners, who consolidated the land to graze cattle. Two-thirds of Brazil’s deforested land is used for cattle ranching.1

But let’s leave the Amazon for a moment and shift our focus more than 3,000 kilometres southeast to the sprawling megalopolis of São Paulo, home to more than 20 million people. São Paulo is Brazil’s economic powerhouse: chaotic, pulsing with life and a little intimidating.

But Paulistas, as the city’s citizens are known, have a problem – a big one. São Paulo is drying up. In fact, much of southeast Brazil is suffering, including the country’s second-biggest city, Rio de Janeiro. The region has had three consecutive years of drought. Despite recent El Niño-influenced downpours, São Paulo’s reservoirs are nearly empty. Last year, the Cantareira Reservoir, which supplies nine million people, was operating at just five-per-cent capacity.2 About a quarter of the country’s 200 million people now live in areas where rainfall is below historic averages.3

But it’s not just the coast that’s drying up; it’s the Amazon itself. The region has had three severe droughts over the past decade. All signs point to climate change as the culprit. Forecasters say the area affected by severe drought may triple by the end of the century. In addition, unpredictable feedback loops could accelerate the cycle. Carbon dioxide (CO2) released from a dead and dying forest will further disrupt rainfall patterns and increase drought – which kills more trees, releasing more carbon in an endless cycle.

It turns out that drought in the Amazon and drought in São Paulo is not just coincidence. Researchers have found a direct link between deforestation in the country’s heartland and water shortages in the densely populated southeast.

Scientists use the term ‘aerial’ or ‘flying rivers’ to describe the forest’s role in continental rainfall patterns.

Here’s how it works.

As humid air rises from the Amazon, water vapour condenses, lowering the air pressure. Since air moves from high to low pressure, humid air from the Atlantic is continually sucked into the centre of the continent. Researchers call this phenomenon the ‘biotic pump’. When the moisture-rich air mass moves west, it eventually slams into the Andean Cordillera, then arcs south and eventually east, bringing rain to southeast Brazil and northern Argentina. If the biotic pump is turned off, or loses its energy, that spells trouble. And that’s essentially what’s happening as the rainforest disappears.

As Alexandre Uezu, an ecologist with São Paulo’s Ecological Research Institute, explains: ‘Were it not for the flying rivers the whole area would be desert.’4

Although the pace of deforestation has slowed recently, the country is still losing more than 500,000 hectares of jungle every year.

Many Brazilians accept this as the price of prosperity. They wonder why they shouldn’t be free to exploit their resources just as North Americans and Europeans did centuries ago. 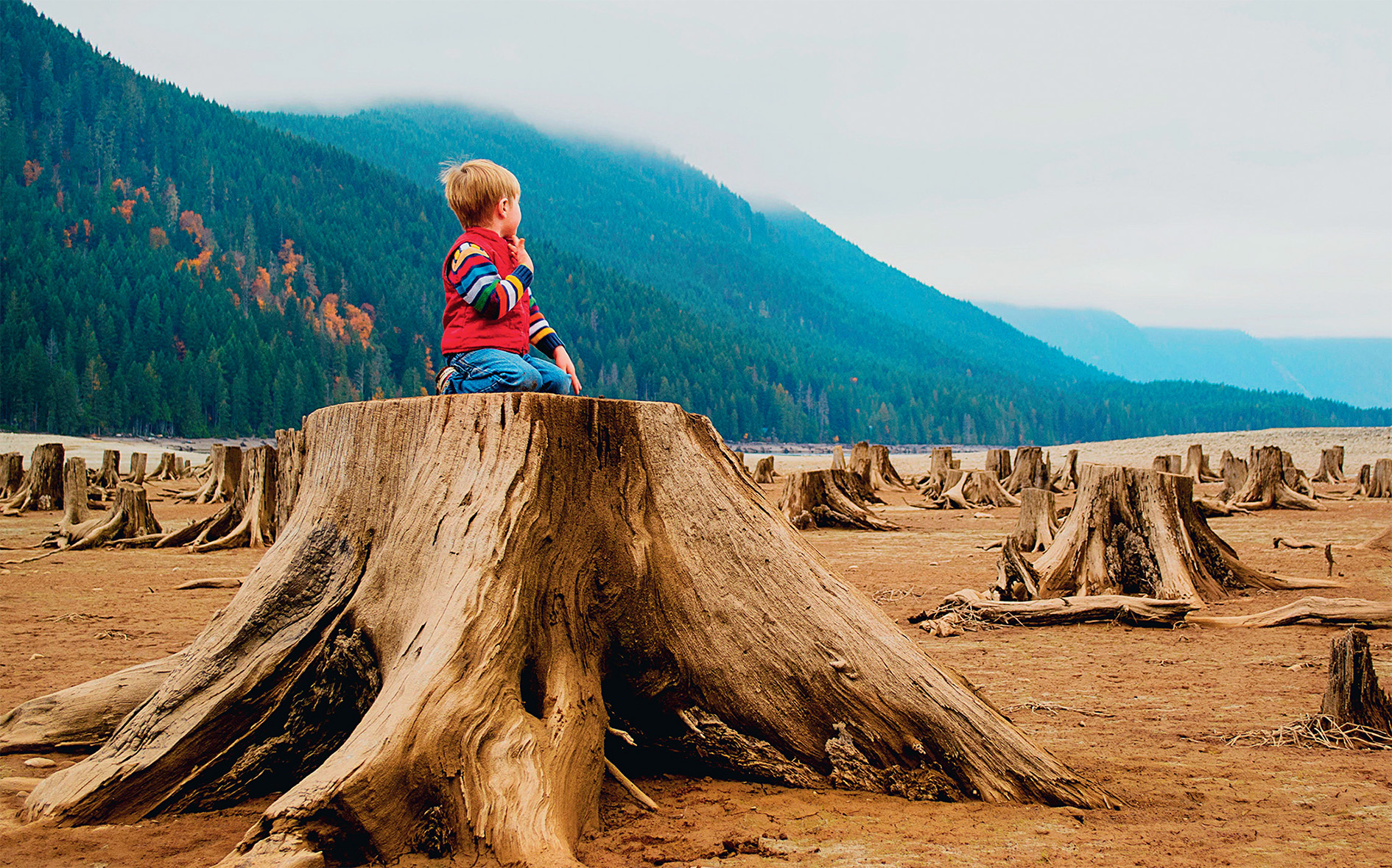 Stumped: a young boy surveys the remains of giant conifers on a mist-shrouded inlet in the US Pacific northwest.
RooM the Agency/Alamy

Since the dawn of the colonial era, our exploitation of the natural world has led to the obliteration of forests on a massive scale. The consequences have been dire – for plants and animals, and for communities that depend on forests for their livelihoods. In the broadest sense, forests are key to maintaining comfortable living conditions on Earth by providing what economists call ‘environmental services’ – storing carbon, filtering air and water, preventing floods and helping to regulate climate. Woodlands are home to 80 per cent of the world’s terrestrial biodiversity. Trees also provide food and shelter as well as healing medicines. It is estimated that a quarter of modern medicines originate from forest plants.

As the human population grew, so did our economic activity. Initially, most of the loss was in temperate regions where agriculture first developed. Later, industrialization, with its ceaseless craving for energy and raw materials, added to the pressure.

At the time of the Roman Empire, dense forests covered 80 per cent of Europe. By the medieval era that figure had dropped to 40 per cent. And in some places it began much earlier. Half of England had been cleared of forest by 500 BCE. Today, ancient forests in Europe have all but vanished. In Ireland, for example, native woodlands make up just one per cent of the land area.

A similar pattern emerged in North America as settlers pushed west, razing forests rapidly during the 18th and 19th centuries. By the end of the 20th century, farms and new settlements had replaced much of America’s deciduous forests.5

For landless poor in Rondônia, the chance to carve out a few hectares from the forest to grow bananas and maize, and raise a few chickens and pigs, trumps conservation. The frontier acts as a relief valve allowing the state to mask extreme inequality. (Brazil has the world’s eighth-biggest economy but there is a yawning gap between rich and poor).

Successive governments have encouraged settlement of the Amazon. But small farmers are neither the main cause of deforestation nor, in the long run, the main beneficiaries. Within a few years, rain and erosion leaches nutrients from the thin tropical soil. Yields fall. The degraded land is soon sold to large landowners and powerful agribusiness companies.

Not surprisingly, a similar combination of cash crops and resource projects threatens forests the world over. 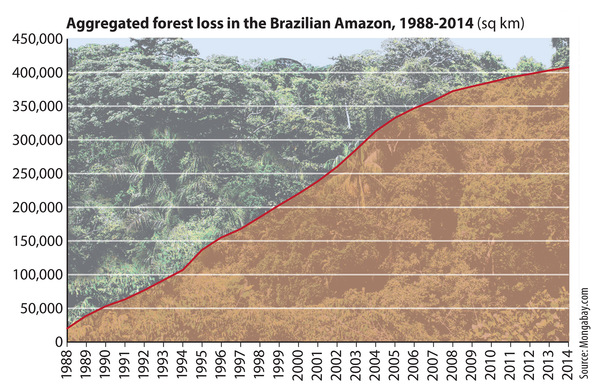 In many countries, managed tree plantations are now the norm. The UN Food and Agricultural Organization (FAO) says 50 million hectares of forests were planted between 2000 and 2010. Unfortunately, these were mostly industrial monocultures – pine, acacia, eucalyptus, rubber and palm – which the FAO bizarrely equates with natural forests.

This might seem odd until you understand the UN’s corporate-friendly goal of ‘zero net deforestation’. Simply put, it means that natural forests can continue to be toppled as long as they are replaced – somewhere, anywhere – by other trees. That’s one reason global corporations such as Unilever, Bunge and Mondelez International have jumped on the bandwagon.

As the World Rainforest Movement notes: ‘Zero net deforestation means companies can continue destroying forests as long as they can show a certificate that someone elsewhere has planted trees or protected some forest of at least the same size as one they converted into pasture or monoculture plantation.’9

‘Our land, which once filled our lives with joy, is a desert of pine trees... where silence reigns because there are no animals, birds or fish’

But planting trees does not necessarily make a forest. Just ask the Mbyá Guaraní people in the Argentine province of Misiones who saw their native lapachos and timbós replaced by an endless expanse of foreign pine trees.

Now, they lament, ‘our land, which once filled our lives with joy, is a desert of pine trees... where silence reigns because there are no animals, birds or fish.’10

The other ‘game changer’ that the UN and the business community endorse goes by the unwieldy acronym REDD (Reducing Emissions from Deforestation and Forest Degradation). The idea is to use market forces to arrest deforestation in what is really an elaborate carbon-offset scheme. It seems simple enough – rich countries pay poor countries not to cut down their forests. Save the trees, save the CO2. Countries (or companies) providing the funds can claim credit for the emissions saved and eventually those credits can be traded in a global carbon market.

But there are a few barriers en route. One is that market-led schemes tend to spiral into greed-driven free-for-alls. We’ve seen what convoluted investment vehicles the deep-thinkers on Wall Street can invent. The 2008 global recession was triggered by such chicanery and the wreckage is still with us. But more to the point: the scheme is an elaborate solution that ignores the core problem. 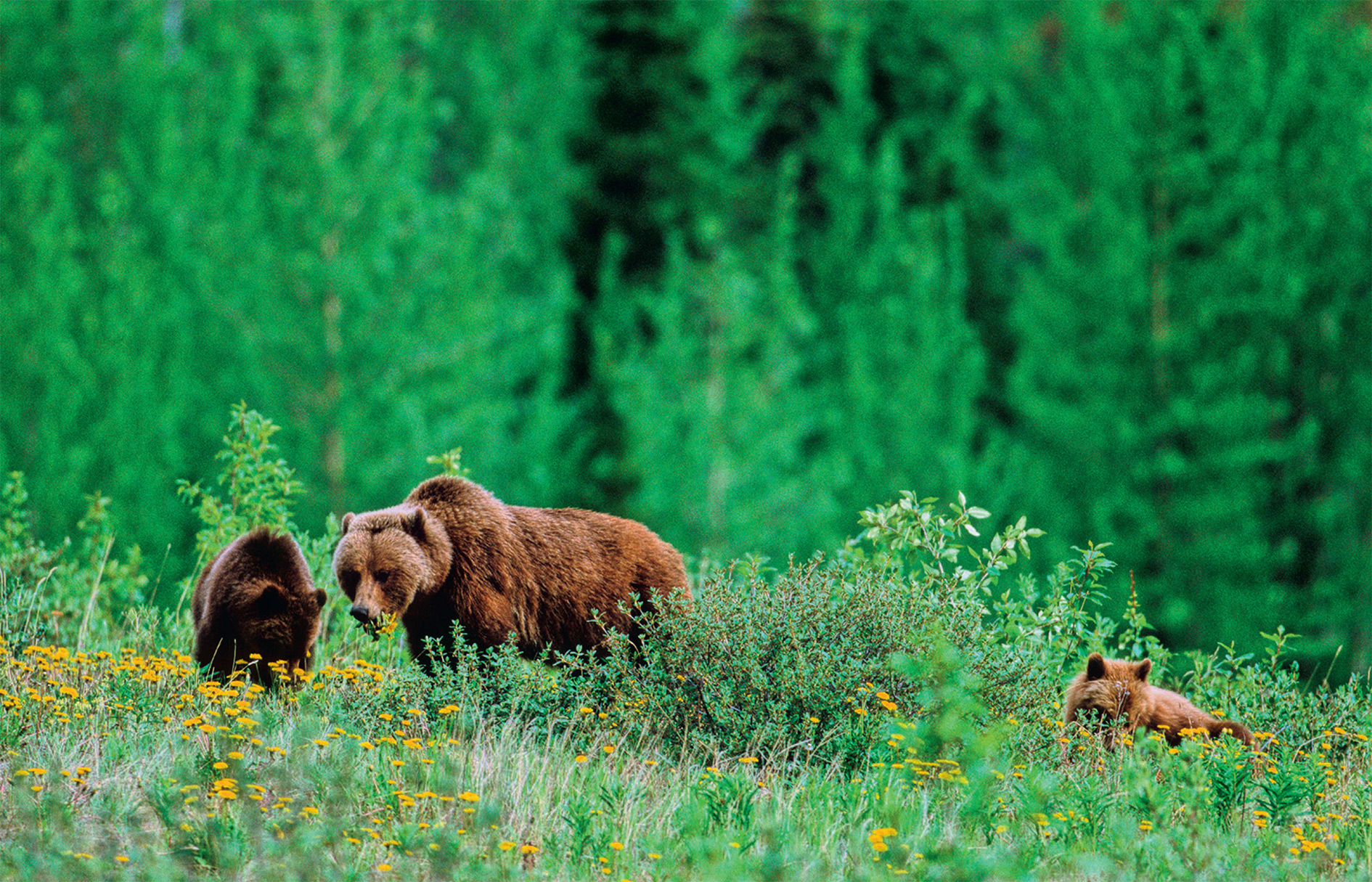 A grizzly bear mother and cubs in Canada’s northern boreal forest. The boreal makes up 30 per cent of global forest cover and is severely threatened by climate change and resource extraction.
John E Marriott/Alamy

With REDD, rich countries can continue to pump out carbon as long as they can pay poor countries not to cut their trees.

More critically, it’s communities who depend on the forest for their livelihoods that tend to get the sharp end of the stick. As journalist Sam Knight argued in his meticulous exposé of REDD in Papua New Guinea: ‘When money and trees mix, it is normally local people who get screwed.’11

An NGO study of 24 projects across a range of countries – including Mozambique, Peru, Nigeria and Kenya – found that communities in REDD project areas are ‘subjected to restrictions on forest use which interfere with their ways of life and livelihoods and reinforces the idea that a well-conserved forest is a forest without people.’12

And that would be a mistake. Because our idealized notion of forests as pristine wilderness separate from human culture is pure invention. Human life has always been deeply intertwined with forests. Millions of people today depend on forests for their most basic needs. And it’s those communities that are best placed to protect and defend them. Recent research supports this claim. Deforestation rates in community-managed forests are consistently lower – up to six times lower in forests where local people have legal rights.13 In the Maya Biosphere Reserve in Guatemala, where indigenous communities manage about a quarter of the two-million hectare reserve, deforestation is a scant 0.02 per cent. In Peru it’s the opposite. There, the government has allowed resource companies to trample on indigenous rights. Concessions cover 75 per cent of the jungle and deforestation is rampant.

Kenya is another country where community forestry is making a difference. Critical upland watersheds were denuded as trees were burned to make charcoal, leading to a dramatic reduction in rainfall and widespread drought. That set alarm bells ringing and eventually led to the creation of community forestry associations to reclaim and manage the barren hillsides. Today, forest cover is increasing and so are the rains.

According to Simon Gitau, warden of Mount Kenya National Park: ‘People who used to be poachers and illegal loggers are now defending the forests.’14

So should we all.

People need forests. But so do the creatures we share the earth with and so does the planet. That’s why it’s urgent we both protect and nurture them.