It happens every year: thousands of hectares of Indonesian rainforest are torched to clear land for palm oil, timber and other agribusiness operations. It’s a perfect storm of destruction. Nithin Coca reports from Sumatra. 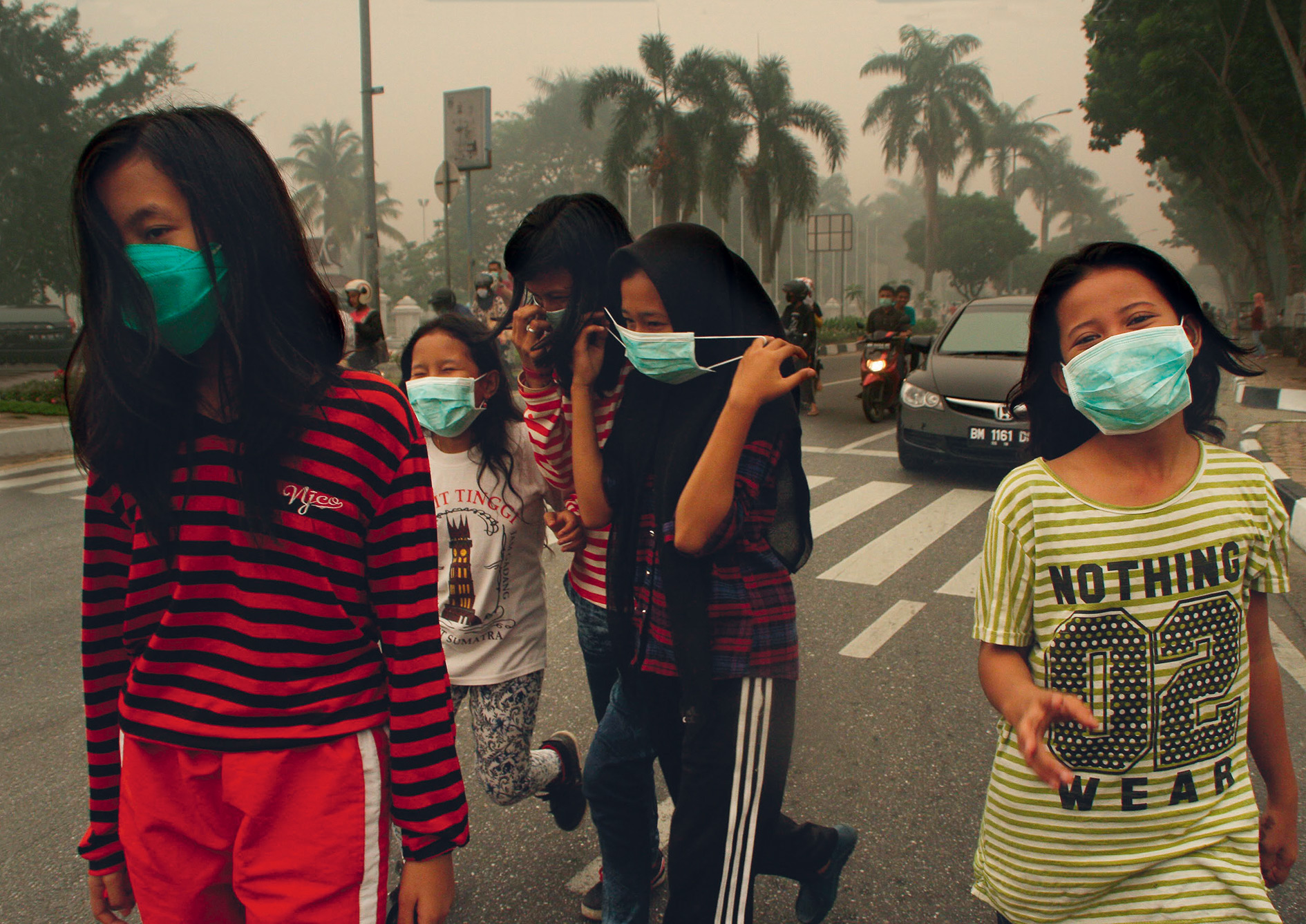 Young girls protect themselves from thick smoke as forest fires swept across Sumatra and Borneo in September 2015. The fires are set to clear the jungle to plant oil palms.
Photo: Sijori Images/ZUMA Wire/Alamy

Pekanbaru, in the heart of the biodiverse, tropical island of Sumatra, is one of Indonesia’s richest cities. It is a modern boom town, with paved roads, glitzy shopping malls and thousands of young, mostly male, migrant workers. When I visited last September, the city was unexpectedly dark and gloomy. Across the island, hundreds of fires were raging, blanketing the city in a haze that blocked the sun and forced residents to don air masks. Pollution was at 10 times the acceptable level.

The fires soon engulfed two million hectares as the poisonous cloud spread across Southeast Asia. The economic toll: north of $30 billion, including an estimated half-million respiratory tract infections and 100,000 premature deaths, according to Greenpeace. In addition, the fires spewed out as much greenhouse gas as Brazil produces in a year.1

‘It was very shocking,’ says Teguh Surya, Forest Campaigner with Greenpeace Indonesia. ‘Singapore, Malaysia, southern Thailand and the Philippines were all affected.’

To many experts and activists, the fires were no surprise. Years of rampant deforestation, the draining of wetlands and the expansion of monoculture acacia and palm oil plantations left the landscape scarred, unnaturally dry and ripe for disaster. The trigger came in the form of an unusually strong El Niño, which brought dry conditions to much of the island nation.

But El Niño is not to blame for the fires.

According to Robert Field of Columbia University’s Earth Institute, there is no natural fire cycle in Indonesia. The fires are all caused by people and are ‘completely preventable’. 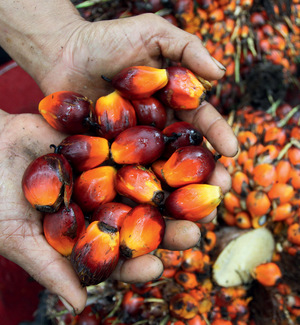 The red fruits of the palm oil tree which are crushed to release the valuable oil. Indonesia is now the world’s top palm oil exporter.
Roni Bintang/Reuters

The main reason for starting the fires is that they make forested land much more valuable.

‘Fire is a tool,’ notes Herry Purnomo, a researcher at the Centre for International Forestry Research in Bogor. After the trees are burned, ‘people claim the land and it makes them rich’. He estimates that every acre of destroyed forest pumps about $500 in short-term benefits into the local economy. Scale that up to two million hectares and it’s a pile of quick cash.

According to the World Resources Institute, more than 35 per cent of the fires in Sumatra are on pulpwood concessions. Most of the rest are on or near land used by oil palm growers. Lindsey Allen, executive director of the Rainforest Action Network (RAN) says: ‘Most of these fires are a direct result of the industrial manipulation of the landscape for plantation development.’2

Neither oil palm nor acacia grow naturally in Indonesia. Both plants require dry land, so plantation owners drain the peat and clear the forests.

It is the extraordinary capacity of Indonesia’s peatlands to store carbon that makes the fires so dangerous. According to Wetlands International, ‘Indonesian emissions from peat soils due to logging and drainage account for 60 per cent of the total Indonesian CO2 emissions.’3

When a peat fire starts, it can be nearly impossible to put out. ‘Fire in peatland spreads easily underground and goes widely in many different directions – that’s the problem,’ notes Jatna Supriatna of the Research Centre for Climate Change at the University of Indonesia.

The thick smoke and deadly pollution also spread across the region, especially into neighbouring Singapore and Malaysia. The two countries caused an uproar, despite the fact that both have significant investments in the palm oil and wood pulp industries. According to a study by the Yale MacMillan Center, more than two-thirds of Indonesia’s palm oil production is controlled by Singaporean and Malaysian companies, often through joint ventures with local companies. The major players – Singapore’s Sinar Mas and Wilmar International, and Malaysia’s Kuala Lumpur Kepong – have invested billions.

‘Singapore and Malaysia complain, but I don’t see any significant effort from these countries to work with Indonesia to solve the fire problem,’ says Purnomo.

Endemic corruption doesn’t help. During the three-decade Suharto dictatorship, an astounding $35 billion was stolen by the ruling family, and that example shows no sign of fading. Family members and cronies still control some of the country’s biggest businesses.

For example, the Sinar Mas Group is led by Indonesian billionaire Eka Tjipta Widjaja. According to Forbes Asia, satellite imagery confirmed fires across Sinar Mas’ huge palm oil plantations. The company vigorously denied the charge. Other palm oil billionaires include Sukanto Tanoto of Asian Agri; Martua Sitorus, co-founder of the world’s largest palm oil trading company, Wilmar International; and Ciliandra Fangiono, head of First Resources. All claim no knowledge of the cause of the fires.

But the problem reaches beyond Indonesia’s neighbours into the world’s biggest economies. Most of the country’s palm oil is exported. First it was shipped to Europe to make biofuels and as a key ingredient in processed foods. Then the US market exploded due to health concerns about hydrogenated oils. Palm oil was the cheapest alternative. Today, the top importing countries are India and China, where there is a booming demand for cooking oil for a growing middle class.

According to RAN, there are several global brands at the end of the palm oil supply chain. PepsiCo, the Japanese noodle maker Nissin, Kraft and Heinz are just some of the companies that will neither confirm nor deny that palm oil used in their products comes from recently burned, or illegally deforested, land.

‘The majority of companies remain overly complacent with their supply chain,’ stresses Fiona Mulligan, Palm Oil Campaigner with Greenpeace. ‘Companies must work together as a driving force for change – no trader, producer or consumer company can accomplish this by itself. And all are, in some way, complicit in causing Indonesia’s fires.’

RAN Agribusiness Campaign Director Gemma Tillack agrees. ‘As palm oil plantations spread across Indonesia and beyond, rainforests are falling faster than ever and systematic abuse of communities and workers’ rights is rife.’

As the rains finally doused last season’s fires, President Joko Widodo – prompted by the upcoming Paris talks – promised to end planting on peat and announced the creation of a peatland restoration initiative. And it’s said that the new commissioner of the Indonesian Corruption Eradication Commission has a well-known green streak.

Let’s hope that corruption in the forestry sector will be one of his priorities.

Nithin Coca is an activist and writer. He splits his time between California and Southeast Asia. 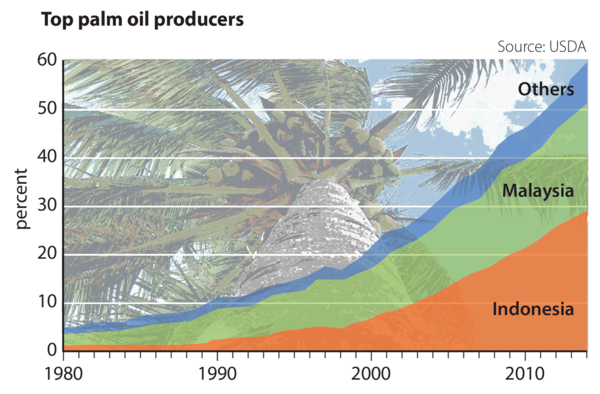 Palm oil production in Indonesia has exploded over the past 25 years, destroying rainforests, reducing biodiversity and eroding human rights.