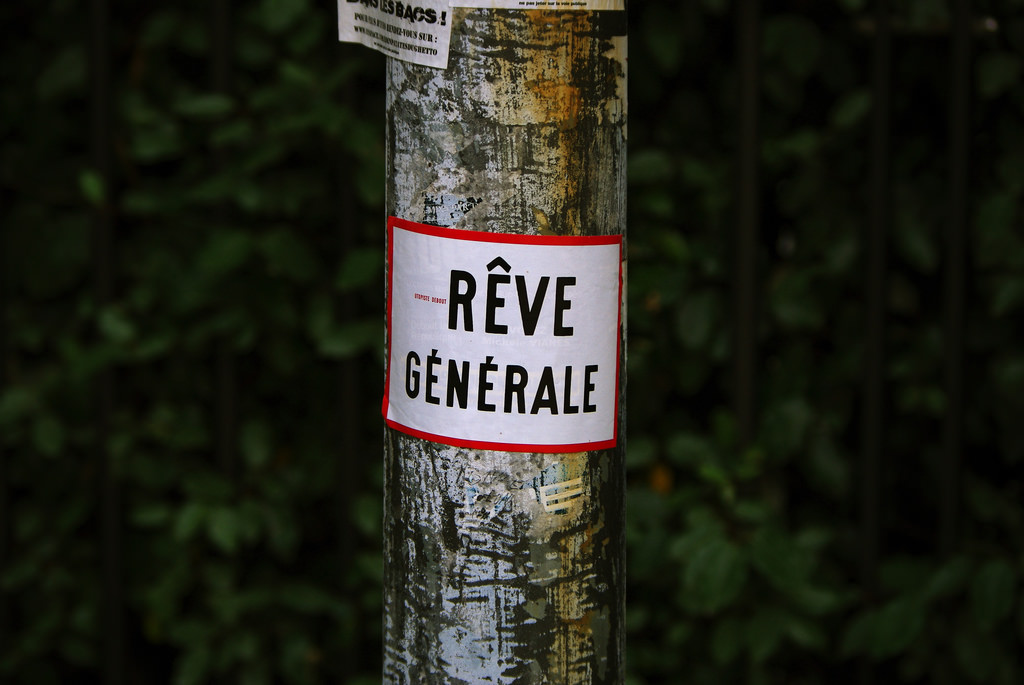 Four days ago the #nuitdebout movement was born and, in a mass outpouring of fury at the government, it has since taken France by storm. As I write, there are around 35 towns and cities across the country planning general assemblies, through direct democracy, tonight.

Demonstrations against new labour laws provided soil for the movement to grow, but activist in France John Jordan explained to me, ‘It’s not just the new labour laws… It's the boiling over of rage and the desire to construct something new from the bottom up whilst deposing a system made by the elite for the elite, a system that everyone knows is broken and cannot be fixed.’

One of the key slogans that the movement is using goes back to the student demonstrations in 2006 against the precarious future young people were facing; ‘Rêve Générale’ is a play on the phrase for a general strike but instead of the normal understanding, it is referring to the chance to have a ‘general dream’; to focus on not just reform but out and out systemic change.

This movement has grown exponentially in a matter of days and tonight is set to see hundreds of thousands of people attending assemblies as part of #nuitdebout. Last night, there were 21,000 people in Paris alone.

Since the November Paris attacks last year, French police have been using extreme methods to discourage protests. Police tactics have included immediate prison sentences for arrestees, rubber bullets, concussion grenades and tear gas but this has not discouraged people from disobeying. If reports from the ground are accurate, the police will not be able to contain or restrain so many if they use such tactics, which may even severely backfire if authorities try.

Another form of Rêve Générale is in motion 3,663 miles away from Paris, in the capital city of Iceland, Reykjavík. There too, thousands of people are likely to fill the streets tonight. The massive leak from the Panamanian law firm Mossack Fonseca, only two days ago, revealed the secret financial dealings of the Icelandic Prime Minister Sigmundur Gunnlaugsson, specifically relating to offshore firm Wintris, owned by his wife and himself. Smari McCarthy, chairman of the board of the European Pirate Party, head of the technology team behind the Panama Leaks at OCCRP and one of the key figures in the ‘pots and pans’ direct democracy movement that followed the economic collapse in Iceland in 2008 tells me ‘People are angry because the prime minister lied about his assets, hid the fact that he was de-facto negotiating with himself on behalf of the government, and because he's so utterly shameless about it.’

In disgust at these revelations, 22,000 people surrounded the Icelandic parliament yesterday calling for the prime minister to resign. For a country with a population of around 330,000 this is a remarkable situation. Gunnlaugsson has refused to resign, has evaded interviews and bizarrely told journalists to look at his Facebook page for updates. ‘The prime minister has requested that the parliament be dissolved, but the president said no for now, although the situation is changing very quickly. I hope this will be a chance for Iceland to finally get the political change that it demanded after the collapse,” says McCarthy.

Guðjón Idir, Director at the International Modern Media Institute (IMMI) which is closely aligned with Birgitta Jonsdottir, the ‘poetician’ MP for the Icelandic Pirate Party, who are leading election polls currently, told me today that ‘The prime minister is finished. There will most likely be new elections but the question is when? Will there be a minority coalition government until then or will there be a hit and run election now, which may prove problematic for smaller parties and new parties, who do not have election-machine-mechanisms ready to go… What we are seeing now is the reason why we need a new constitution, which brings forth democratic reform and tools for the public to keep power in check.’ Shortly after we had this conversation, reports came out from Iceland that the Prime Minister had resigned.

These same people, part of the Icelandic Pirate Party and IMMI, were behind the crowd sourced constitution that took place in the ‘pots and pans’ revolution in 2008. It was a radical new vision of how a government can be in service to a population, it was a Rêve Générale being actualized but the incoming and now disgraced government betrayed the people and failed to enact the constitution.

Tonight there will be hundreds of thousands of people in France and in Iceland coming together to dream of systemic change to their governments, revolutionary change, and not mere reform but a ‘Rêve Générale’.

As activist John Jordan told me, ‘Some say what is happening is more like a “plateau” than a movement, a state of intensity and potentiality that keeps going. A plateau is the opposite of a linear excitement that leads to a singular aim, the fore play leading to orgasm, the insurrection leading to revolution. What is happening here is something totally different, an intensity that lasts and transforms itself, that rises and falls like the tides and the seasons, but that never gives up.’

This situation may not be restricted to just these two countries. The Panama Papers, as with the mass leaks we see through WikiLeaks, make it clear that the 1 per cent are making a mockery of democracy and punishing the ordinary citizens with inhuman austerity and draconian measures while they hide away billions for themselves. Everybody now has a right to come together and take part in the Rêve Générale.