When looking at the Middle East, all attention is focused on Syria right now, writes Sophia Akram. 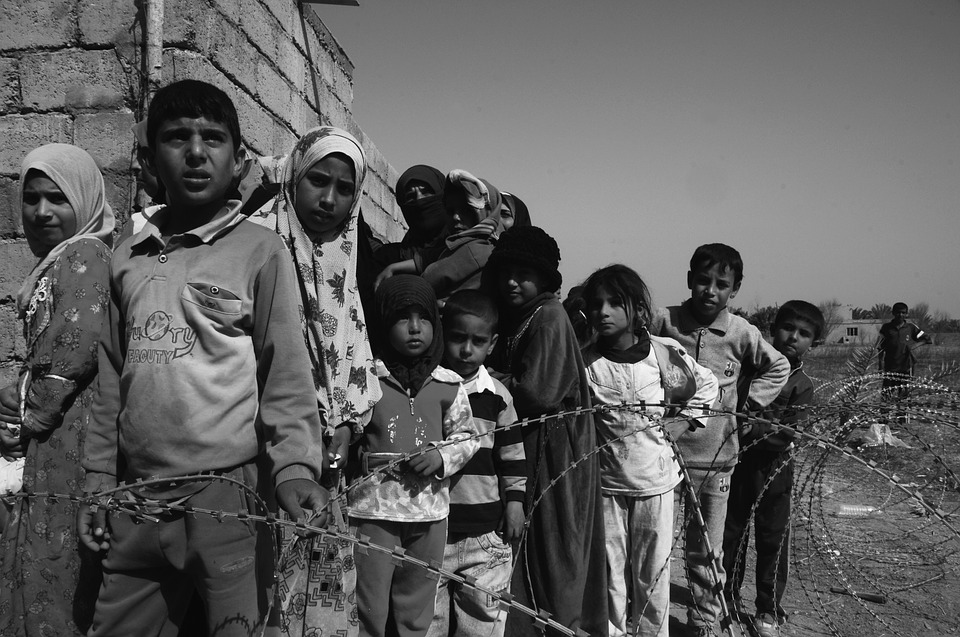 Children of war.
Photo: Janeb13 under a Creative Commons Licence.

Looming in the shadows of neighbouring countries however – in Libya, Yemen, Iraq – are several conflicts all affected by a similar foe, tainted by similar insurrection and tyrannical rule. The humanitarian crises within them are growing with less obvious and vivid imagery than overflowing boats arriving at the shores of Europe, enigmatic oratory amongst the seats of Britain’s Westminster Palace or emaciated children as a result of siege on basic necessities.

Those images are harrowing for good reason, for the ultimate reason that we preserve within us humanity and compassion. The danger is that we overlook those that deserve the same attention yet are hidden below the surface.

As of 31 December 2015, there were was an estimated 6.6 million internally displaced persons (IDPs) in Syria and UNHCR have registered 4,415,868 Syrian refugees. The Syrian crisis is humungous so it’s easy to miss a large problem happening next door.

According to Amar, a charity working on providing mental health support in Iraq, there are 3.3 million IDPs within the country. The country has suffered years of repression and several conflicts and as such has a fragile and damaged health care system but with growing mental health problems. In 2006, international humanitarian aid NGO, Doctors Without Borders reported that 18.6 per cent of the population suffered from some sort of mental illness, before the recent insurgency of Daesh. Since their terror campaign began in 2014, they have inflicted the worst types of atrocities on the population. The most vulnerable – women and children – have suffered the brunt.

Nihad Barakat Shamo Alawsi, a Yazidi teenager who was kidnapped from the Northern Iraqi village of Sinjar, experienced this firsthand as she and 28 of her family members were taken from their home and imprisoned. She was systematically beaten, raped and sold on from Emir to Emir of the Daesh group before escaping, having to leave behind a three-month old baby as a result of her abuse. Amar met her while working within the refugee camps of Iraq but she is one of thousands of girls and the European Parliament as well as the US House of Representatives have since labelled the campaign against the Yazidis by Daesh, a genocide.

There are always two results from a humanitarian catastrophe – injuries in the physical and the psychological form. When someone is raped, they experience both, and in the case of IDPs in Iraq, they are also struggling to piece together basic needs – shelter, food, want of dignity in their newly found hardship. The Yazidis, a minority Christian faith in Iraq, are harboring this infliction amongst others as there are around 3,500 enslaved.

The widespread violence currently ongoing in Iraq has been documented extensively. The UN estimated that 18,802 civilians had been killed and 36,245 wounded between 1 January 2014 and 31 October 2015. These numbers pale in comparison to the effects of violence in Syria however throughout the Middle East there is a huge shortfall in humanitarian funding. Donations are being diverted to the most domineering. It’s not just Iraq that has suffered from the funding dearth – the UN is struggling to deliver the most basic needs in Libya and Yemen’s humanitarian appeal is 96 per cent unmet.

Iraq has the added dynamic of years of cumulative trauma but many Iraqis do not necessarily recognize mental health problems. Without treatment these problems manifest in anxiety, depression, smoking, alcoholism and even suicide. The World Health Organization defines mental health as ‘a state of wellbeing in which every individual realizes his or her own potential, can cope with the normal stresses of life, can work productively and fruitfully, and is able to make a contribution to her or his community.' Since psychological disorders affect the normal functioning of people, treatment for mental health problems should be provided as a human right. Because of its affect on the country at large and those it touches, long term trauma can be detrimental to a nation.

Iraq is in need of approximately 5,000 psychiatrists but it has only 400. Charities like Amar that build mental health clinics to help stem the fallout from years of conflict are small, yet around for the long term, forced to survive even when the media shines a spotlight elsewhere. They, like others, need the financial as well as governmental support to continue their battle in the shadows of bordering conflicts.