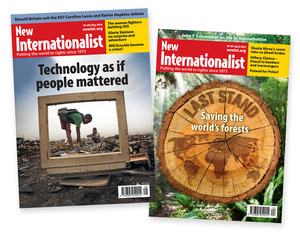 It was unfortunate that the Argument (NI 492) adopted the common assumption that there are just two positions on the EU: remain or leave.

There is a third logical possibility, one that I would argue is correct. This is that it makes no important difference to the vast majority of people whether Britain is inside or outside the EU.

Whichever way the referendum goes, Britain will be a society based on wage labour and class division, with people beset by varying degrees of poverty and insecurity.

Since the announcement that BP’s sponsorship of the Tate is over (Agenda, NI 492) the campaign to kick fossil fuel sponsorship out of arts and culture is gaining momentum.

When visitors entered the British Museum on 3 April, they were confronted with actual oil from the Deepwater Horizon disaster, teargas from Cairo, images of disappeared union workers from Colombia and a range of other beautiful and troubling objects sent from around the world.

Our unsanctioned exhibition, A History of BP in 10 Objects (displayed online at historyofbp.org) exposed the destructive practices of BP and asked: why does the British Museum continue to work with this corporate criminal?

With the new director Hartwig Fischer now in post, the renewal of the BP deal is one of the first major decisions he will have to make. We hope this exhibition – along with the opinions of the eminent climate scientists and cultural figures who support our campaign – will help him to make the right decision.

With native old-growth forests crashing down around the world (NI 492), it’s easy to see how little Tasmania escapes greater notoriety.

Earlier this century, a woodchip export frenzy saw the state’s logging industry boasting the highest proportional rate of native forest destruction in the OECD, combined with possibly the world’s lowest rate of value recovery from the 94 per cent of harvest that was chips. The heavily subsidized industry collapsed, but the new state government is vowing to restore its hegemony.

The most plausible explanation is a symbiotic relationship between a resource extractor desperately dependent on access to a resource controlled by governments, and major political parties equally dependent on corporate patronage. In Tasmania, this has produced administrative grotesqueries such as formal self-regulation by the forestry industry, and legislative gifts including exemptions from environmental legislation and lavish tax breaks for Managed Investment Schemes typically based on pulp plantations replacing cleared native forest. The industry finances bogus grassroots organizations opposing regulation and conservation in general, while the state government supports efforts to gain international forestry accreditation for the industry.

I am an international forestry consultant. I worked for many periods in Indonesia and have monitored the spectacular spread of Acacia Mangium with great interest.

The author states that ‘neither oil palm nor acacia grow naturally in Indonesia’. This is incorrect. As is to be expected, one of the areas where it is growing naturally is in the region closest to Australia, around Merauke in West Papua. In fact, this is where I have sighted the biggest specimens anywhere.

Of note is the remarkable human-propagated spread of the species in a few short years throughout Southeast Asia and China.

Bridget Anderson (NI 489) says: ‘This idea that migration is a peculiarly contemporary problem does not chime with global history.’ Yet later on the same page she writes: ‘While people have indeed always moved, they have not always migrated’ – the expansion of migration ‘dates from just after the Second World War’. So migration is indeed a peculiarly contemporary problem! Or is this professor of migration just as confused as the rest of us as to what people mean when they talk about migration?

In the Forests issue (NI 491) the Y axis on the graph in Forest facts should have read million megatonnes, not per cent.

Thank you to reader Ellie Crane of Cambridge, England, for pointing out an error in Diana Beresford-Kroeger’s article ‘Green machines’ (NI 491). Carbon dioxide binds reversibly with haemoglobin and not irreversibly as was stated. It is carbon monoxide that binds irreversibly creating the condition of carboxymethaemo-globinaemia, which leads to illness and death.