‘No more political parties’ for a Mexican municipality 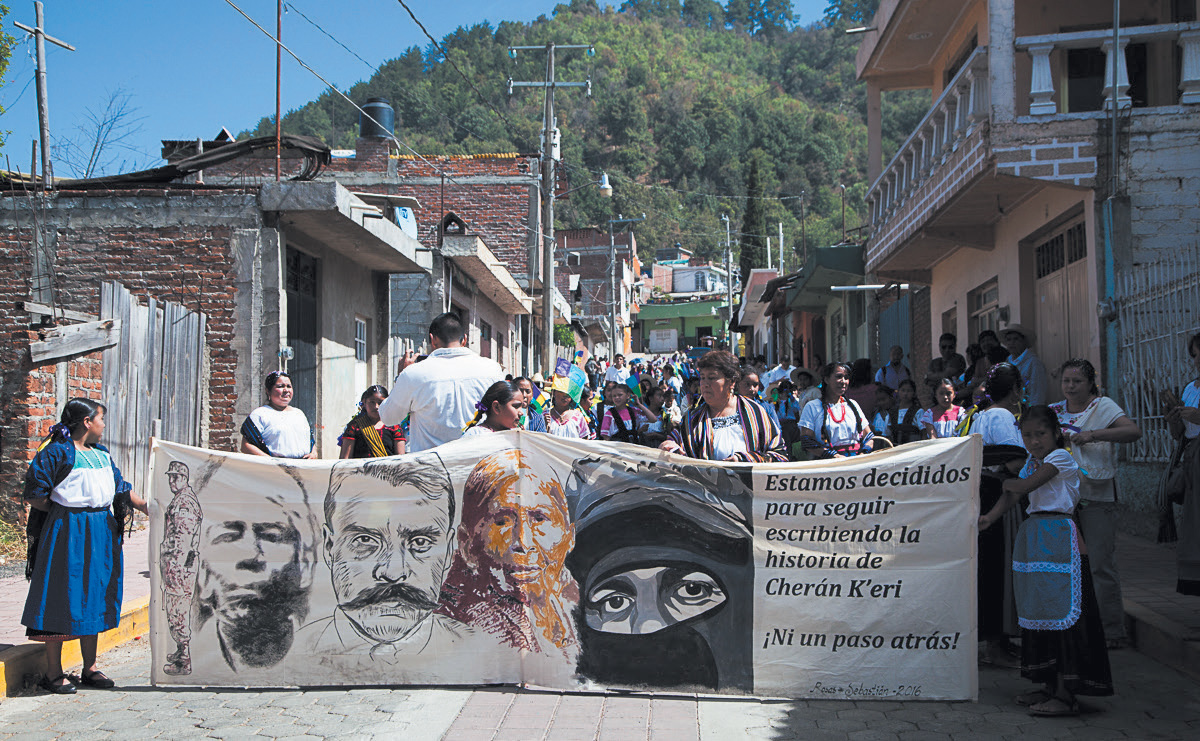 ‘Not one step backwards!’ declares this banner. ‘We are determined to keep writing the story of [our town] Cherán K’eri.’
Photo: Isabel Sanginés/Somos El Medio under a CC Licence

Cherán, a municipality in Michoacán, Mexico, is home to around 18,000 people. Civilians in the state have long been caught in the middle of battles between competing drug cartels, and some have even armed themselves to defend their communities.

Between 2007 and 2011, Cherán’s government allowed loggers to cut down around 10,000 hectares of trees. This illicit business thrived thanks to protection from drug cartels, which wanted the land to cultivate drugs or avocados.

Local activists fighting to protect the forests were killed, ‘disappeared’ or threatened. With the government ignoring their complaints, Cherán’s inhabitants soon took matters into their own hands.

On 15 April 2011, unarmed women blocked the path of heavily armed loggers. Neighbourhoods around the municipality soon did the same. Uniting around bonfires, they called for security, justice and community patrols. And because politicians had shown no interest in the concerns of local people, ‘no more political parties’ soon became a rallying cry.

Cherán then launched a legal battle, which saw it win political autonomy. In December 2011, locals voted to elect their own councils without the participation of political parties, believing citizens had more of an incentive to ensure their long-term wellbeing than politicians.

Ever since, locals have ruled themselves through community assemblies. At neighbourhood bonfires and meetings, they nominate and elect members of an Elder Council, who simply implement the decisions made in popular assembly votes. One local insists that ‘the only authority is the assembly’ and that council members can be dismissed at any point by the assemblies.

Millions of trees have now been planted and Cherán has established a tree nursery, a brick factory, a carpentry workshop and one of the biggest rainwater dams in Mexico. Earnings are administered communally. The municipality also protects itself with community patrols and almost 200 nightly bonfires.

Cherán is just one example in Mexico of people opposing dispossession and taking their destinies into their own hands. But its democratic project and daily battle for an alternative future is rapidly becoming an inspirational symbol of resistance.

One local has the following message for people outside Cherán: ‘We are doing our duty by protecting our territory, people, water, earth and trees. Let that inspire others.’

Why did the market fail to produce an Ebola vaccine?
Justice for juveniles