Why did the market fail to produce an Ebola vaccine?

Mustapha Dumbaya lost 47 relatives in the outbreak. He explores why dysfunctional R&D is letting down those people who need it most. 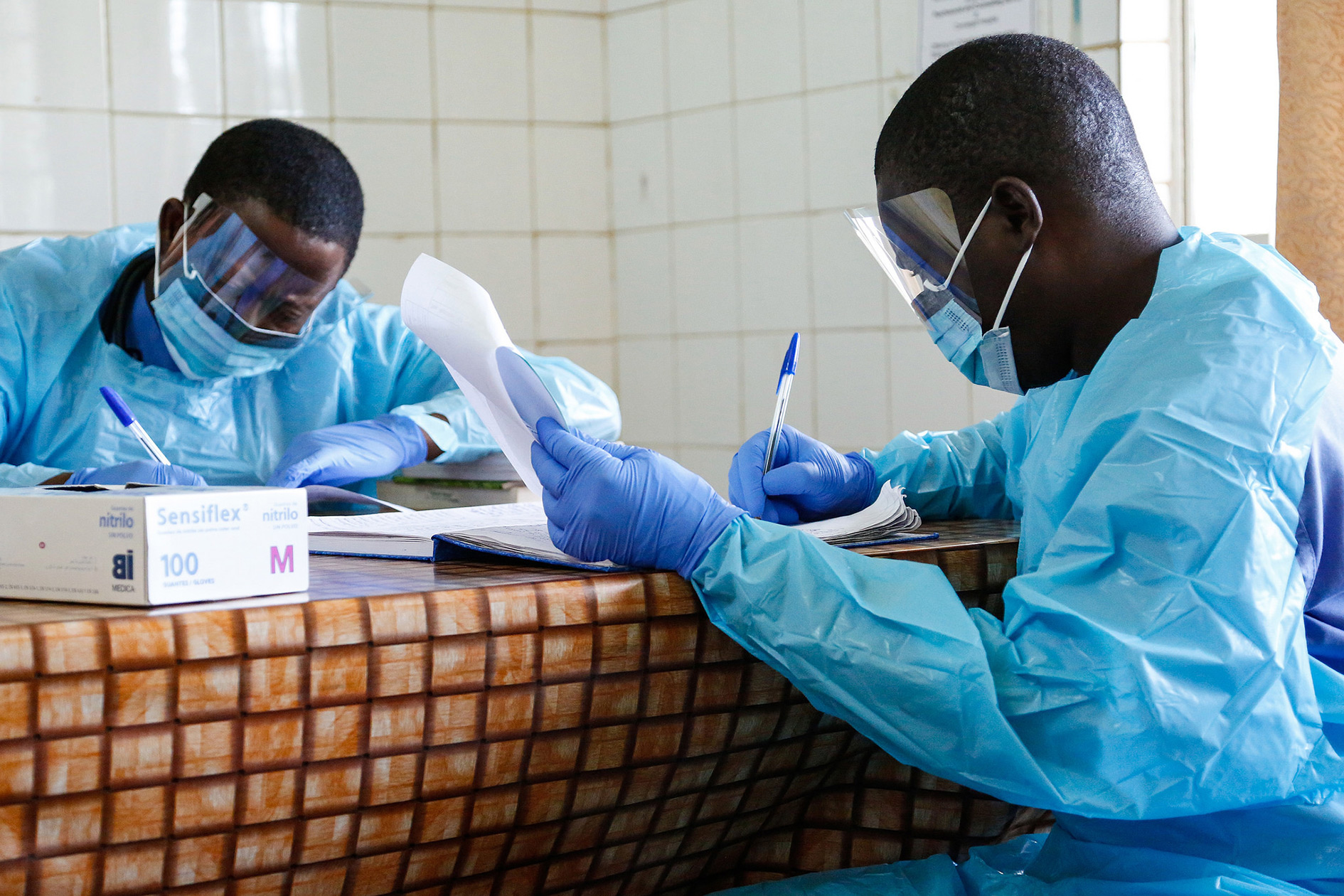 Doctors working at Connaught Hospital, Freetown, Sierra Leone. This hospital was on the frontline of the Ebola epidemic when it hit in Freetown.
Photo by Simon Davis/DFID

The world’s media extensively covered the Ebola crisis at its peak, but now the epidemic’s impact on communities in West Africa has fallen off the news agenda. And while millions of donor dollars eventually poured in to help contain and defeat the virus, its after effects – social, cultural and economic – will continue to be felt for years to come. We take a critical look at the humanitarian response and health systems deficit. Ebola is not a new disease – it’s been around since 1976 – so why did over 11,000 West Africans die 2014-16? Did we learn the right lessons from the outbreak, and, with Ebola considered endemic in the region, is Sierra Leone ready if the virus returns?

Did we learn the right lessons from Ebola?
And will Sierra Leone be ready, should the virus return? Hazel Healy travelled there to find out. Read more

'These are the boys who fought Ebola!'
Gangsters turned mobilizers, the Tripoli Boys kicked Ebola out of their neighbourhood. Amjata Bayoh and Mohamed S Camara find out what happened next. Read more

Where my father lies
Mariama B Jalloh’s quest to find her father’s resting place among the unmarked graves of those lost to Ebola in Sierra Leone. Read more

For better or worse
Mamie Lebbi, the first woman to test positive for Ebola, describes how she survived in the bush with her husband’s help. Read more

'Everything is on my shoulders'
Serah Tomba went from being a student to sole carer of seven orphans. Read more

'I speak for the girls'
Elizabeth Katta talks about the lingering impacts of teenage pregnancy, which spiked during Ebola. Read more

It was Christmas Eve, 2014. I had just returned from Connaught Hospital in the Sierra Leonean capital, Freetown, where I had gone to do a story about people who had been abandoned there by their families over fears of Ebola. I returned home exhausted. Lying on my bed that evening, I could not forget what I had seen at the overwhelmed hospital: beds of sick people, mainly women and children; patients who tested negative for Ebola but were diagnosed with other diseases, lying outside on the cold floor of the entrance and courtyard, because the hospital was full.

I had been reporting on the Ebola crisis for months, working to devise public health messages for radio stations about preventing the spread of the virus. Until then, I had avoided going to hospitals and health centres as it was too risky. But when I passed Connaught, it struck me that it could have been me, or someone from my family lying there and my instinct as a journalist was to go in. So, while observing the health and safety I routinely taught others, I began to interview the sick, as well as the matron of the hospital.

Afterwards, I went home and had a bath. I could not eat or sleep and by midnight, I started feeling feverish, my body trembling. I got worried that I might have contracted Ebola. I cried. I called my brother to warn him, then isolated myself so that if infected, I would not spread the disease. I lay there alone in my apartment, thinking it was the end.

As it turned out, my fever dropped and I soon recovered. I didn’t have Ebola after all. But those days of fear brought me even closer to it. I was not alone. West Africans in the three hardest-hit nations of Guinea, Sierra Leone, and Liberia lived with the perpetual fear of losing their lives to Ebola. As a journalist, I reported on the epidemic. As a Sierra Leonean, I was devastated by it. And my family – like that of so many other West Africans – was decimated. I lost 47 relatives.

The recent Ebola outbreak caused pain and suffering on a catastrophic scale, infecting over 28,000 people and killing over 11,000. One key reason for all this suffering was the lack of a licensed vaccine in the current market. Since Ebola was first identified in 1976, there have been 26 outbreaks that infected just over 1,500 people, killing around 70 per cent of those infected. Yet research and development of an Ebola vaccine has been subject to long delays. That’s because producing vaccines or drugs for a disease that predominantly affects developing countries is not a lucrative business.

‘We did have vaccines sitting in large bags, available to be tested at the start of the outbreak,’ says Adrian Hill, an internationally renowned scientist based at Oxford University, who heads up the Jenner Institute for public sector vaccine development. The problem, he went on to explain at a recent public lecture, was they had not been able to make a business case to companies for investing in the development and licensing of an Ebola vaccine – a cost that was likely to run into hundreds of millions of dollars.

Research into an Ebola vaccine started over a decade prior to the 2014 outbreak. Results were promising but progress was slow. Scientists in the US and Canada had vaccine candidates that had been proven to be 100 per cent effective in protecting primates from Ebola, but they had not advanced far enough to be tested on humans. And in any case, the impetus behind the research was not to save lives in developing countries: ‘The funding you could get five years ago to make an Ebola vaccine was not to prevent outbreaks in Africa, unfortunately, but to defend North Americans against a potential bioterrorism attack,’ explained Hill.

‘We had vaccines sitting in large bags, available to be tested at the start of the outbreak’

The Jenner Institute received funding from the World Health Organization (WHO) in 2014 to accelerate research and development of new vaccines and fast-track testing of existing Ebola vaccines on humans, in response to the outbreak. The outcome of WHO’s call was unprecedented. A total of 13 Ebola vaccine candidates began clinical trials. Merck’s rVSV-ZEBOV progressed far enough to demonstrate that it was safe and effective, while Johnson & Johnson and GlaxoSmithKline’s are far into clinical trials. So it turns out we did have a vaccine that could have saved lives – it just had not been tested on humans.

‘If we depend on the [pharmaceutical] industry entirely, we are just going to follow the industry’s priorities which may not align with the priorities of society at a particular time,’ says Gary Kobinger, Director of the Centre for Research in Infectious Diseases at Laval University in Canada, who led the development of the Ebola drug ZMapp as well as the rVSV-ZEBOV vaccine at the Canadian National Microbiology lab which is now being developed by Merck. ‘It’s for countries that have money to come forward and put money to support these projects,’ he concludes.

Tropical diseases accounted for about 1.4 per cent of total global expenditure on research and development in 2012, according G-Finder report that tracks global R&D for neglected diseases.

This shifted up to $33 million of crucially needed funds from other diseases like bacterial pneumonia, meningitis and diarrhoeal diseases. As much as we need to scale up funding for Ebola, we cannot continue to live in a system that only reacts after an outbreak. Other diseases that have lost funds to Ebola could become the Ebolas of tomorrow. Research and development of vaccines for Ebola and other neglected diseases cannot be left in the hands of pharmaceutical companies. The primary incentive for these companies is money; there’s little business sense in producing a drug that won’t yield economic dividends.

One step forward, one step back

Since the outbreak, the WHO has recognized the need to work towards a system that aims not only to respond, but to prevent. It is now attempting to restructure a completely dysfunctional R&D system, which for decades has been driven by rich countries and the diseases of the rich.

In 2014, the Ebola haemorrhagic virus spread through West Africa. It was the longest, and most widespread outbreak in history, killing more than all past episodes combined. Check out our fact spread on how Ebola impacted Sierra Leone.

Within a more equitable, reformed infrastructure, rich and poor countries would come together to pilot new, cost-effective, innovative forms of drug development where both sides share equal responsible for implementation. Done well, it could be revolutionary – no more charity-based, reactive-to-pandemic drug development.

But WHO states are dragging their feet. That, and the agency’s own bureaucracy, has so far scuppered the WHO’s attempts to negotiate a legally binding version of this R&D Agreement that would ensure ‘innovation and access to affordable vaccines, medicines and life-saving technologies for all’. The WHO’s proposed ‘pooled fund’ – a solidarity pot of money by member states to tackle diseases of poverty – has only received $7.65 million of an $85-million target for 2014-2017 (and some of this is only pledges). It will take pressure from civil society groups such as Medicins sans Frontieres and Universities Allied for Essential Medicines, for governments to be held accountable on this score.

Elsewhere, the Alliance for Accelerating Excellence in Science in Africa (AESA) has been launched in Nairobi to develop domestic research capacity and enable our scientists to work on diseases of priority to Africa. This is hopeful, but we need to ensure there is sufficient funding, political commitment and buy-in from both western aid agencies and African country leaders, to make this work.

Vaccines aside, we need a focus on building up the precarious health infrastructure of Sierra Leone, Guinea and Liberia that left them so exposed, not only to an outbreak, but already unable to care for patients suffering from other diseases like malaria, cholera, typhoid and AIDS that were common to the region. Overlooking factors like this led to Ebola’s rapid spread and leaves the door wide open to another outbreak of Ebola – or another neglected disease.

One of the promising Ebola vaccines has been used to control sporadic outbreaks in Guinea using a method called ‘ring vaccination’, which inoculates those who have come into contact with Ebola sufferers. We have made some progress.

But as a recent report from University of Minnesota’s Center for Infectious Disease Research and Policy warns, the job is not yet finished. To date, no vaccine has been submitted for regulatory review and big questions remain over efficacy.

The right to life is a universal human right; access to medicine is a fundamental component of that right. It is a desperate shame that so many had to die to prompt the acceleration of research and development of a vaccine against a disease as deadly as Ebola.

The Mekong River is not for sale!
‘No more political parties’ for a Mexican municipality