Where my father lies

Mariama B Jalloh’s quest to find her father’s grave. 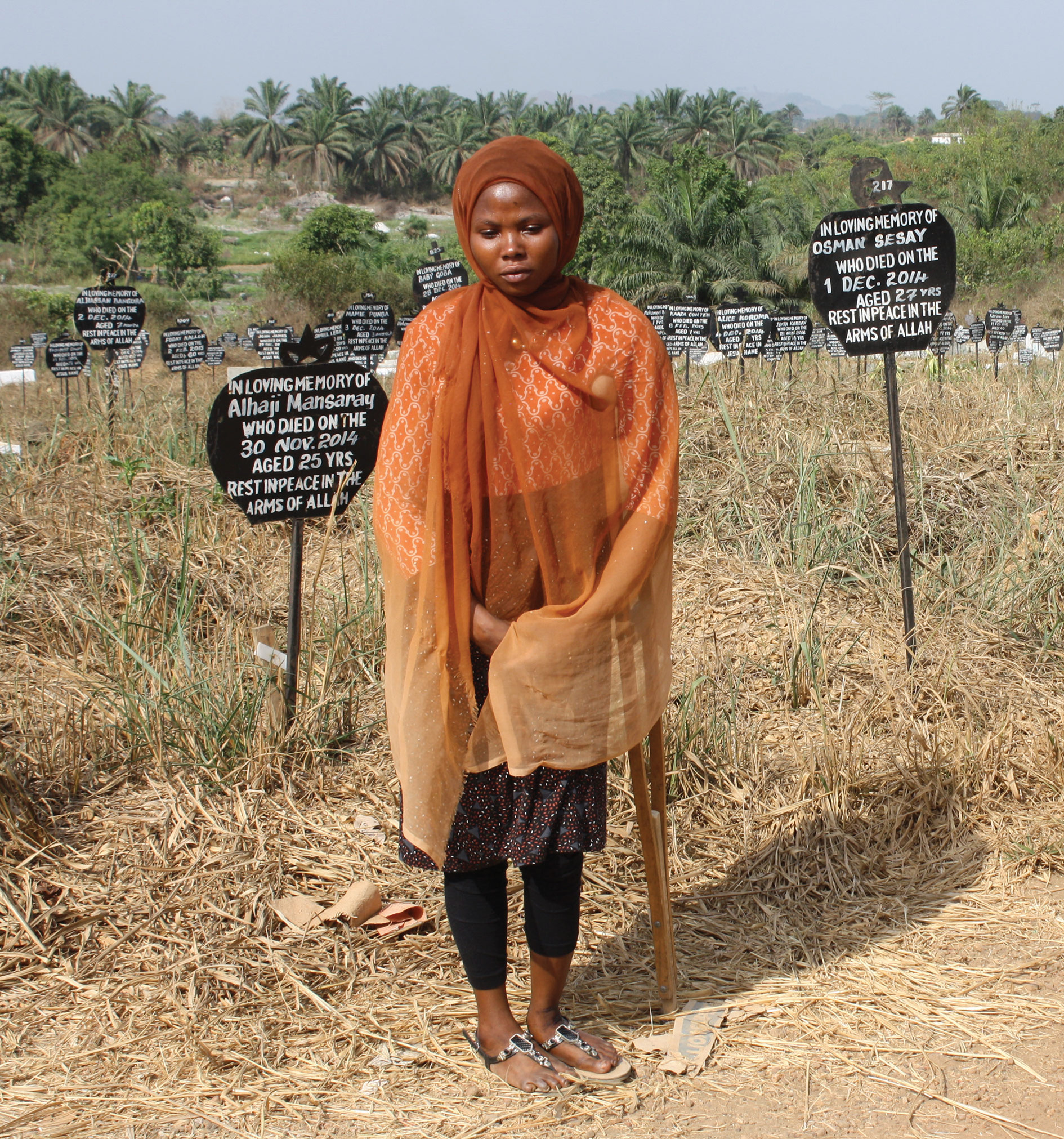 ‘People were just buried with sticks for markers’: Mariama Jalloh despairs of finding her father’s grave on arrival at the overgrown burial site for Ebola victims in the southern city of Bo.
Photo: Hazel Healy

Ebola destroyed my family. When I heard my relatives were sick, I was staying in Makeni, a day’s journey away from my village, Kumala. At first I thought, let me go there, even if I die with them. But the whole country was in lockdown, and I could not travel. I stopped eating, thinking that I was going to be the only person left.

It killed 27 of my relatives, among them my father. He died on 9 November 2014 – there were hardly any treatment centres at that time, so he was taken hundreds of kilometres away from our home in the northeast, down to Bo.

My father loved me so much since I was little. I was his eldest child. I caught polio when I was a baby and that made my mother ashamed of me. When I was young, she used to beat me and fling me outside. It was my father who protected me.

The only misunderstanding between me and my father was over education. He didn’t think that girls should go to school. But I took it to the elders in my village. I believe education is so important, especially for disabled people – it means you can get a job, you can be independent. We can’t do physical work like digging and planting.

At the time my father was buried, there was no respect for victims of Ebola

The elders put pressure on my father. He allowed me to study, but he said he would not pay for it. He believed that when Sierra Leonean children get educated they will not respect their families, they will not work on the farm or help cook; they will think they are kings and queens and not serve God.

I managed to find my own way. I made money from hairdressing to buy my uniform, and because I came top of my class, my teachers also lobbied for me, and later I won a scholarship to continue.

Later on, my father had a change of heart. He told me that trying to realize his lifelong dream to go on a hajj to Mecca had made him understand the value of education. He couldn’t read or write, or speak English, and a brother (the only educated person in our family) did everything for him. Before Ebola, they were in the process of preparing to go. He came to Makeni, out of the blue, and made a promise that on his return from Mecca, he would help me to finish my education. But then he died.

When my father died so far from home it caused my family great pain. At the time my father was buried, there was no respect for victims of Ebola. They did not bury him with respect – a big family man like him! My family wept bitterly thinking about that. We did not want my father to die like this.

My brother said he would come to look for my father, when he had the money. But until now, 18 months after his death, he could not afford to make the journey. We were also afraid we would not be able to find him.

When On Our Radar came with New Internationalist, we travelled together to search for my father’s grave. We collected a copy of the death certificate with the number 187, which the council said would correspond to his burial place.

But when we got there, we saw that it was not organized. All these people were just buried with sticks. You could not read many of the numbers any more. We began to search, but there were so many graves there. We searched for hours.

It felt like a disaster. I nearly lost hope. Then we saw some gravediggers who helped us – they remembered where they had buried him, from the date of his death.

My heart was telling me it was around this one area. That’s why I stayed looking around there. I found sticks that seemed to have similar numbers but not his. And that is where we found him in the end. That shows that maybe my father was directing me.

When I found him, I wept. I cried: ‘My father, you have left the earth behind you, you left our home and died here where nobody knows you. The family are crying for you. There is no-one to take care of us, now we have lost you. We are left in God’s hands.’

I felt that he could hear me and he was crying also. I felt closer to him, I felt he could see me. Even now, I feel he is with me.

The next day, we brought a permanent sign with his name. I was able to say the prayers that you must say when a Muslim dies in Sierra Leone. I blessed him 10 times in Arabic and that blessing will go direct to him. I asked God to take care of him, the way my father took care of me when I was small.

My father died alone here, so the marker they gave him was not good enough. And the same goes for most of the people who died here without family. Most of the sticks in the graveyard have already faded or fallen down – it’s only those with family in Bo who got the proper markers.

I feel better now I have seen his grave. We have written a sign and placed a marker there. We cleaned around him. Now that I have identified him, my family can come.

I took photos of everything – the stick, the grave. I want to show my family everything exactly as it was. They will be proud of me – especially a disabled person like me; they wouldn’t expect it. I feel happy that I was the one who found my father’s grave. When they come, they will not have to suffer, the way I did.

Ebola - the facts
For better or worse