The latest view from the U.S., by Mark Engler. 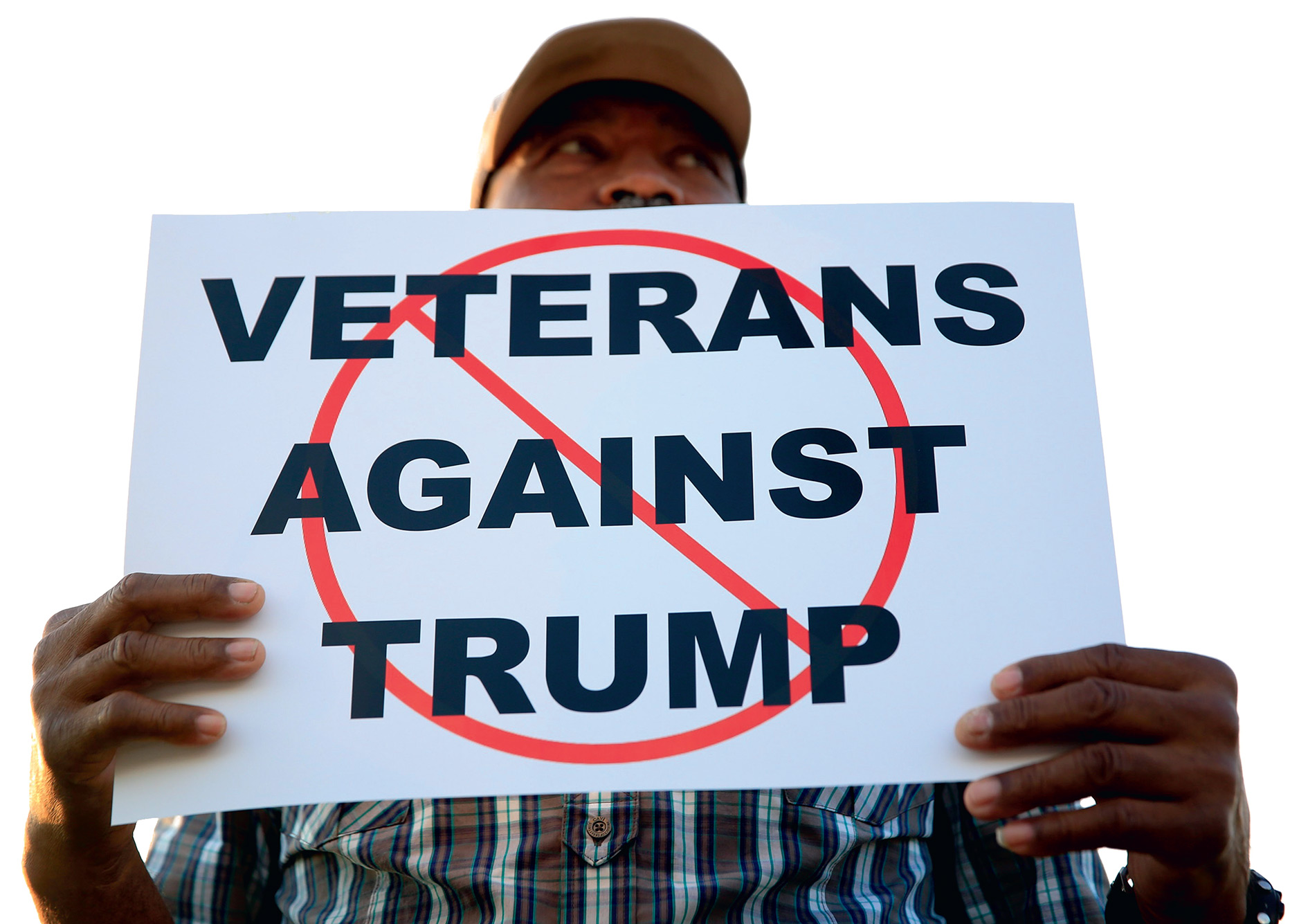 If there’s a silver lining to Donald Trump’s alarming run for the US presidency, it’s the rise of a group of military veterans dedicated to challenging his hatred and racism. In recent months, members of #VetsVsHate, including many who fought in Iraq or Afghanistan, have proven to be as irritating for Trump as a tick in his elaborately sculpted comb-over.

‘The Vets love me,’ Trump says at campaign appearances. But it makes for a bad visual when news coverage can cut to a shot of veterans protesting outside Trump Tower in New York City with signs reading ‘Hate does not make America great’.

In truth, Trump’s relationship with veterans is hardly as loving as he wishes. He famously disparaged fellow Republican John McCain, a former Navy pilot who was held as a prisoner of war in Vietnam. ‘He’s not a war hero,’ Trump quipped. ‘I like people who weren’t captured.’

Like many children of the elite, Trump managed to avoid being drafted in the late 1960s. But that doesn’t mean he hasn’t faced danger – at least in his own mind. He once joked that facing the risk of contracting a sexually transmitted disease while sleeping with numerous women in his younger days represented his ‘own personal Vietnam’.

Early this year, Trump claimed to have raised nearly $6 million for veterans’ charities and to have person­ally written a cheque for $1 million. Yet reporters who have looked into Trump’s frequent boasts about his generosity have ranked him among the world’s stingiest billionaires. (‘Proof of Trump’s charity-giving elusive,’ read the headline from the Associated Press.)

As it turns out, months after his million-dollar claim, he had failed actually to make any donation to veterans’ groups. Only after newspapers started inquiring did he hand over the money.

‘For us, it’s part of a long and disturbing pattern of Donald Trump using veterans as a political prop, both for his own self-advantage and to advance an agenda of bigotry and hate,’ said Perry O’Brien, a protester and US Army veteran.

Of course, those who do enlist in the US military tend to have very different life experiences than the children of millionaire real-estate developers. In what’s known as the ‘economic draft’, army recruiters routinely target low-income and communities of colour, where repeated rounds of austerity have stripped away other government services. There, the promise of job training and tens of thousands of dollars for college in exchange for enlisting is one of the few offers of assistance forthcoming from the state.

Not all of those who accept the offer are later interested in appearing in photo ops staged by aspiring demagogues. As protester Mickiela Montoya explained, ‘I’m a woman, I’m a Latina, and I’m a Veteran; and [Trump] has hit negatively on every single one of those points – and then some.’

#VetsVsHate reminds us that, while members of the US military skew conservative in their political beliefs, the community does not speak with one voice. And those who break with the stereotype can have significant impact.

In 2005, returning veterans who had been sent to fight in Iraq – but who quickly saw the senselessness of the mission and deplored the widespread Islamophobia they witnessed – played an important role in reigniting public opposition to George W Bush’s neoconservative foreign policy. Iraq Veterans Against the War, one leading group, called for immediate withdrawal of occupying forces, reparations for the damage caused by the US-led invasion, an end to corporate pillaging of the country, and full healthcare and mental-health benefits for returning troops.

By the end of his second term, Bush was a political pariah, due largely to his disastrous wars. With luck, opposition from veterans can help lead Trump to a similarly ignoble end – preferably before he ever enters the White House.

Mark Engler’s new book is entitled This Is An Uprising: How Nonviolent Revolt Is Shaping the Twenty-first Century (Nation Books). He can be reached via the website DemocracyUprising.com.

Reasons to be cheerful
Progress is not inevitable