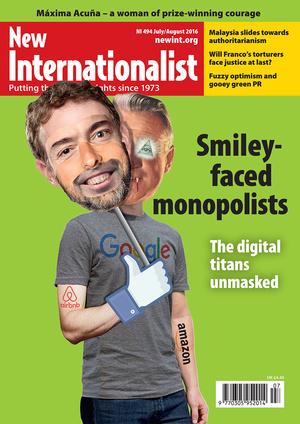 Agree totally with your general argument about the excessive power of internet giants – but your Amazon vs Walmart example ($71 billion vs $13 billion, Facts, NI 494) is for digital sales only. Bricks and mortar Walmart have total sales of nearly $500 billion (they’re actually the world’s largest company by sales). Although those sales are probably at very low margins and harder to dodge VAT on!

Tell it to my intestine

Lawry Rhodes (Letters, NI 494) suggests the shoreline of western Patagonia cannot be 50,000 miles long because the equator has a length of 24,900 miles. My small intestine is about 7 metres long and fits snugly within my 1.8 metre tall body. Given that western Patagonia includes a large number of islands and does not have a smooth coastline but rather one that repeatedly folds back on itself, it is entirely possible that the length of its coastline could be greater than the circumference of the world.

Your articles about Sierra Leone (NI 493) captured me, and I can certainly well relate to them. I had the experience of establishing the infrastructure and doing the logistics for the Hastings Airfield Ebola Treatment Unit that was paid for by the Australian government.

It was a real life experience... Sierra Leone is certainly a beautiful country; full of beautiful people.

Her idea of men doing a half-day of free babysitting once a month to be able to call themselves feminist is clever. But in making her point about unpaid women, she missed an opportunity to say that poor people in general, men and also children, are underpaid, or, worse, are treated as slaves with no pay. She also finds the need to put down Emma Watson’s impassioned efforts to draw all types of people to the all-important cause of women’s rights as being equal to men’s rights.

Ms Smurthwaite also chose to express her feminist anger by using foul language that just does not fit with anyone interested in treating all humans with respect. It is sad that we hear so much foul language in our daily lives – promulgated in movies, on TV, and now in one of my favourite alternative news magazines. The English vocabulary is extraordinarily rich, and similar feelings can be more eloquently expressed with a variety of other words. By choosing to use trendy, unsophisticated and crude words to express our feelings, we are not only being lazy, but are also aiming for the lowest common denominator of human expression. And we are missing out on appreciating the power of truly potent language that might reach anyone open and willing to change longstanding notions brought to us by the patriarchy.

Progress is not inevitable
Beirut, my city
Back