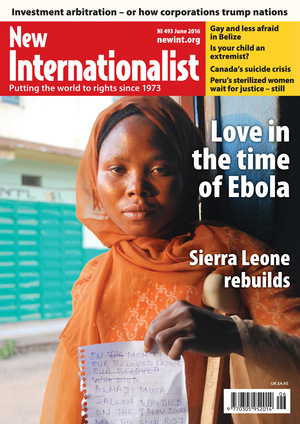 Thank you for the excellent articles on After Ebola (NI493) on which I have two further observations. First, the impact on investment/tourism of the media coverage was felt across Africa (including South Africa) where Europeans and North Americans shunned going ahead, thinking Ebola was rife on the whole continent. While not minimizing the impact in the three countries, we need to be better at explaining what is happening where. The narrative was set in London and Washington of helping all of Africa. Among the many southern African countries that gave help was the South African government, particularly on testing in-country, but no Western media outlet mentioned it.

Second, the Cape Town Mining Indaba in February 2015 saw the mining companies and ministers from Liberia, Sierra Leone and Guinea come together to agree a major role for the mining companies to provide, if requested, countrywide help in the event of a similar emergency – and not simply cut themselves off from the situation outside the mining concession boundaries. Nobody died inside those boundaries. This needs to be seen as part of the licence to extract in countries if called upon.

Re: ‘Love without touch’, NI 493. This is amazing – a love story with real heart, not sentimentality.

Simon Trace is right: limited competition and innovation have created a broken medicines market (‘Male Baldness v Malaria?’, NI492). We can’t continue to blame ‘high costs’ of research and development – even pharma boss Andrew Witty [CEO of GlaxoSmithkline] admits that. We must turn our attention to fixing the system that cultivates these practices.

Alternative models for incentivizing research, such as grant funding and cash prizes, would help drive down prices. But they must be combined with a new ‘Global Observatory’ – a global body that governments could use to share research and collectively prioritize the development of vital medicines.

The World Health Organization has already laid out a plan to make these proposals happen. Now, at the next World Health Assembly, we need the UK government to sign up. Only then can we create a medicines market that puts people ahead of profit.

Michael James (Letters, NI492) tells us that the ‘root cause’ of the huge migration crisis is ‘overpopulation’. This is a spectacular example of misdirection, allowing the Empire’s warmongers a free pass they must not be allowed. None of these migrants left behind their homes and all they knew because of overcrowding. They left because the US bombed their houses, or wars made staying home impossible.

While the EU is not blameless in these wars, they are only Obama’s little helpers, and the primary cause for this multifaceted disaster is the US ‘war on terror’. If we are made to believe it’s because too many women are having babies, it would be a grossly unfair attack on the mothers who bear the brunt of these crises.

John F Schumaker (‘The demoralized mind’, NI491) is one of my favourite explainers of the human condition and he packs a sentence like a Sherpa summiting Everest.

Re: ‘The demoralized mind’. This is a very important topic. I would only add three things.

1 Modern education has failed to equip people with the concepts and even the vocabulary that enables them to grapple with the problem. There is already a rich Western tradition of Idealism. We don’t need to reinvent anything so much as avail ourselves of the moral tradition that has been ignored in the past 100 years or so.

2 Along with this is the notion that this is not the first time there has been a crisis of meaning. Here the work of the sociologist Pitirim Sorokin is instructive. In a massive historical study he showed how human culture alternates between materialistic and non-materialistic phases. (We are today, he argued, at the end of a decaying materialistic phase.)

3 Today, intellectuals are trying to criticize the materialistic order within the materialistic mentality. And that can only work so far. We really need an Idealistic critique of materialism. For that we can go back to writers in the 18th and 19th century – to Ralph Waldo Emerson, for example.

You don’t always want to believe everything you read in New Internationalist. In the film review of The Pearl Button by Malcolm Lewis (NI 490), the near 50,000 mile-long shore of western Patagonia would take it approximately twice around the world as the circumference of the world at the equator is about 24,900 miles.

The web address at the end of ‘Big Davids, Small Goliaths’ feature (NI493) should have read: aboutisds.org

What's not for sale in branded America?
'The Republic of Possibilities'
Back