What's not for sale in branded America? 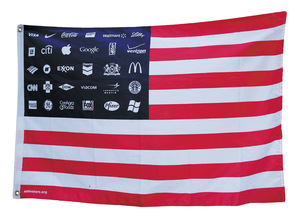 Will children in the US someday attend Coca-Cola High School or McDonald’s Elementary? Given the pace at which corporations and their brands are colonizing public space, it’s not too far-fetched.

Americans in recent decades have accepted that public trains, buses and transit hubs should double as billboards for advertisers. Twenty-five years ago, only one major-league baseball team played in a corporate-branded arena. That has changed. Despite the fact that stadium developers routinely receive lavish public subsidies, sports contests now take place in such venues as the KFC Yum! Center, Quicken Loans Arena, and Minute Maid Park.

The last of these stadiums, located in Houston, was briefly known in the early 2000s as ‘Enron Field’. That designation held until the inconvenient revelation of massive fraud at Enron sent the company into bankruptcy and made its name synonymous with the worst abuses of casino capitalism.

In 2013, trustees at Florida Atlantic University backed away from the idea of naming their stadium after the transnational GEO Group. This lovely corporation is in the business of running for-profit prisons, and it has been repeatedly accused of human rights violations. All it took was months of public shaming and dogged student protests to help the wise university stewards decide to scuttle the deal.

Public spaces previously regarded as off-limits to private branding – schools, government buildings, and national parks – may soon suffer the same fate as the stadiums and transit stops that now display corporate logos in exchange for cash.

In the wake of the 2008 financial crisis, officials in Newtonville, Massachusetts, proposed selling the naming rights to an area school. The move left exasperated local psychologist William Huddleston to complain to the Wall Street Journal: ‘Let them sell the lockers, the pool, the restrooms – but not the name of the school. The notion that one would sell their name for money reinforces to children that everything is for sale.’

The country’s nature reserves are certainly starting to give this impression. As the Journal reported, ‘In Virginia and Maryland, the North Face logo adorns some trail markers in public parks,’ and ‘Nestlé SA is building playgrounds in several New York state parks and emblazoning the name of its Juicy Juice brand on signs.’

In April, the Washington Post reported that the National Park Service has announced its intention to open some of the country’s most famous natural treasures to an ‘unprecedented level of corporate donations, broadening who can raise money… and what the government will give corporate America in return’.

Spokesperson Jeff Reinbold, frighteningly willing to meld patriotism and market doublespeak, explained that the new policy is about advancing ‘the American narrative’ and ‘aligning [the parks and private companies] with the values of authenticity’ the Park Service represents.

With the US deep into the process of branding so much of its commons, is it any surprise that the White House may be next?

Donald Trump is less a leader with a coherent political ideology than a walking ‘brand identity’. Although he styles himself a real-estate developer, Trump increasingly makes money not by actually building things, but rather by lending his name to condominiums, resorts, and golf courses – not to mention lines of cologne, menswear, steaks and energy drinks. (Intrepid eBay buyers can still track down bottles of Donald Trump, The Fragrance from 2004.)

Never short on self-regard, Trump estimates the value of his ‘brand’ at $3.3 billion. And even as properties bearing his name have filed for bankruptcy – perhaps most recently the Trump International Golf Club in Puerto Rico – Donald has walked away with lush profits.

As it turns out, Trump may be the president that privatized America deserves – a catastrophe in waiting for a country whose children may soon be enrolling at Nestlé Middle School, and whose trustees have yet to learn the lessons of Enron Field.

Mark Engler’s new book This Is An Uprising: How Nonviolent Revolt Is Shaping the 21st Century has just been published by Nation Books. He can be reached via DemocracyUprising.com