Stories and photos you may have missed in the last 12 months. Compiled by Jo Lateu. 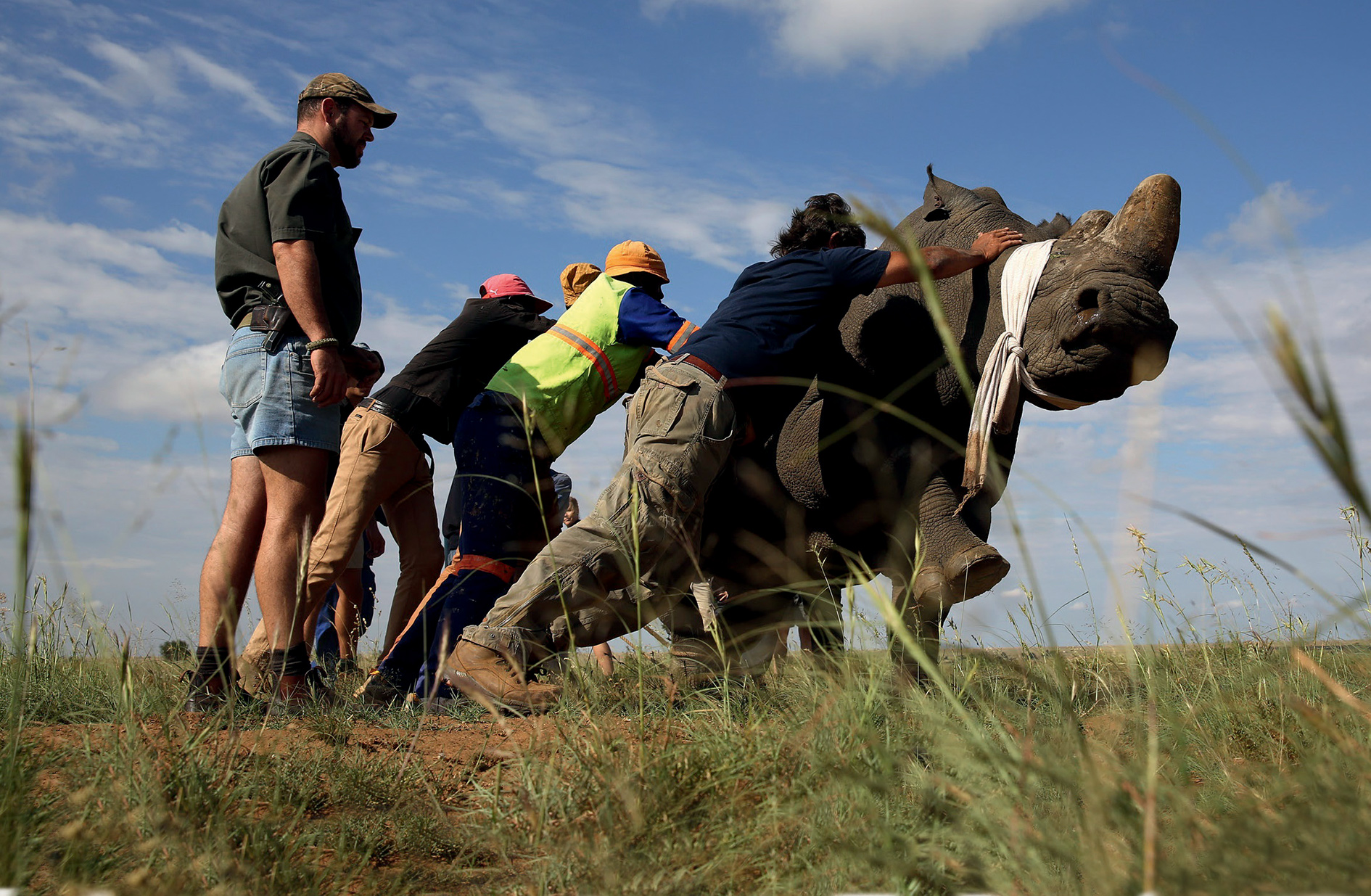 Gently does it: at a farm outside Klerksdorp, workers lower a tranquillized black rhino to the ground before dehorning it in an effort to deter poaching. A sign that this measure is working is borne out by the fall in poaching. In the first seven months of this year, 702 carcasses were found compared to 796 in the same period in 2015, but a review by the Department of Environmental Affairs revealed that elephant poaching has increased. Between January and July 2016, 414 alleged poachers were arrested. 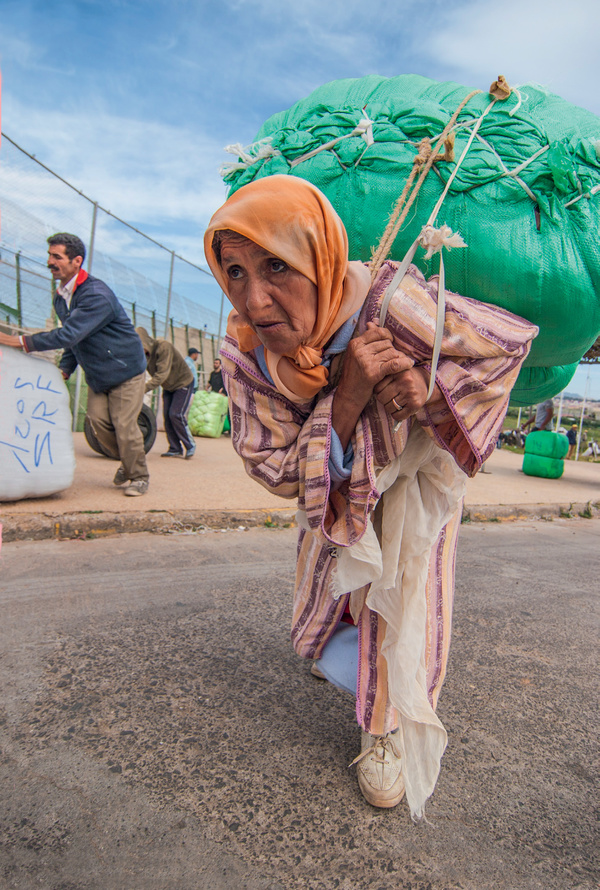 An elderly woman crosses the border from the tiny Spanish enclave of Melilla into Morocco – one of thousands who each day carry on their backs up to 80 kilograms of goods for sale. For them the border is porous, allowing them to carry out irregular trade and avoid paying tariffs (it is legal to carry packages as long as they are ‘personal baggage’). But for refugees the border is nearly impossible to cross. In 2016 Spain stepped up security to prevent asylum seekers gaining access to the European Union via its North African enclaves. Melilla is now enclosed by 10-metre fences and moats protected by guards. 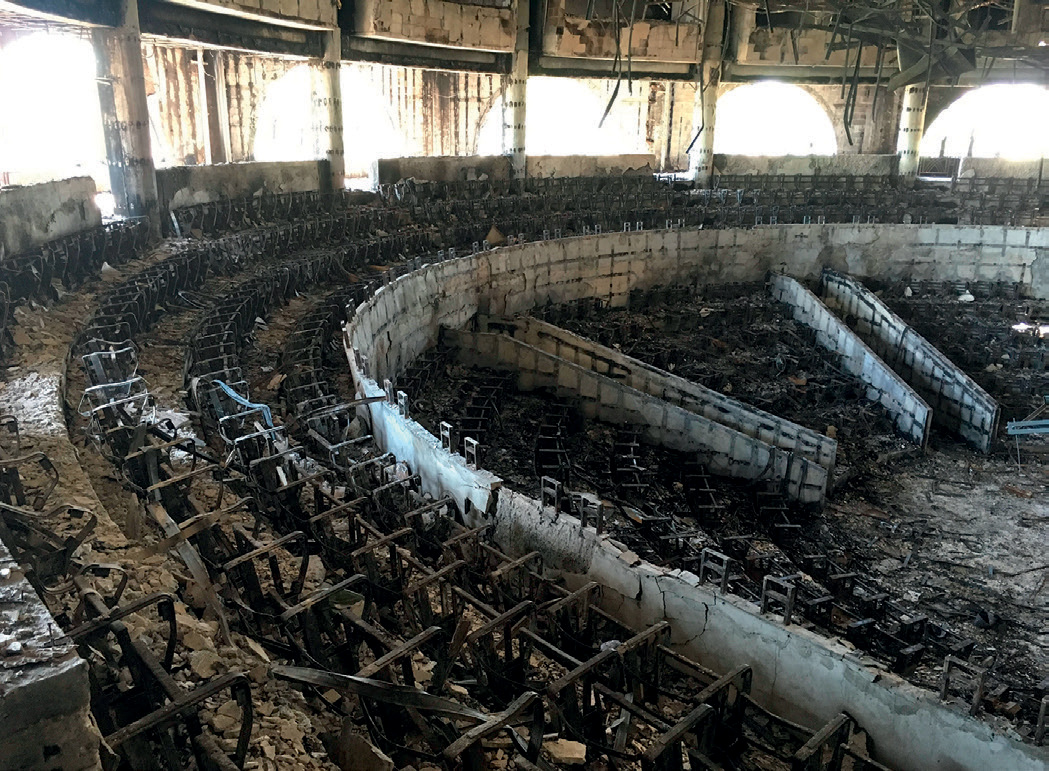 Déjà-vu? In a repeat of events that followed the 2009 election, anti-government protests broke out in September after incumbent Ali Bongo retained the presidency by a margin of less than one per cent of the votes. The charred interior of the parliament in the capital, Libreville, was all that was left after clashes between the police and supporters of opposition candidate Jean Ping. Three people were killed and over 1,000 arrested. International observers criticized the election and said that Bongo had benefited from preferential access to money and the media. 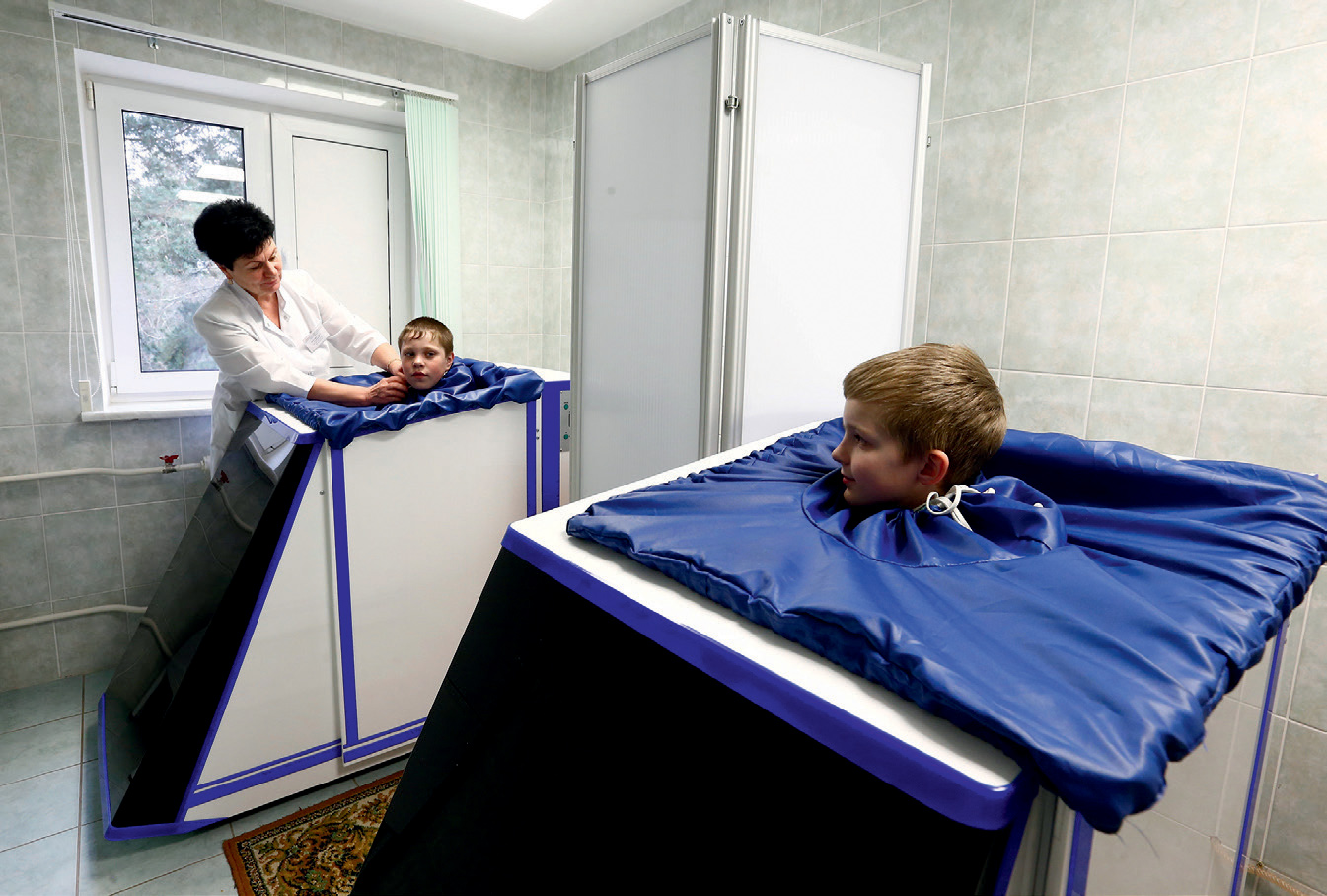 Children undergo physiotherapy in a rehabilitation and health centre on the outskirts of Minsk, an area left contaminated after the 1986 Chernobyl nuclear accident. According to UNICEF, children born in Belarus since the disaster are more susceptible to thyroid cancers and a range of other health issues caused by the radioactive fallout. As the country marked the 30th anniversary of the disaster, controversy raged over the construction of a new nuclear power plant on the border with Lithuania, with politician Mikalai Ulasevich telling the press that the government ‘are building a crematorium’. 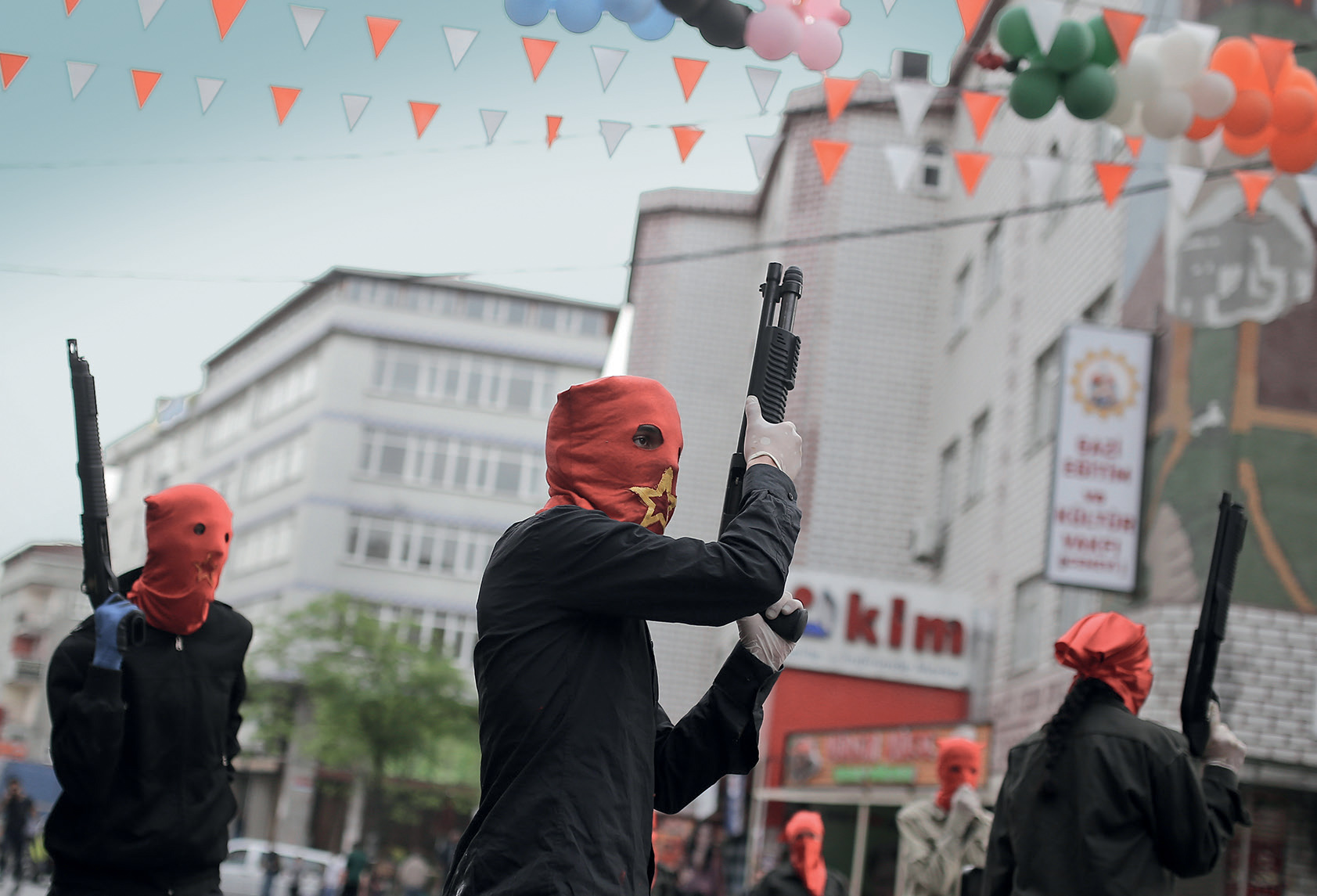 In April, militants took to the streets of Gazi, a mainly Kurdish and Alevi district of Istanbul. The area holds regular demonstrations against the government’s treatment of ethnic minorities. President Erdoğan’s 2016 security crackdown has seen him take a harder line against the Kurdistan Workers’ Party. In May he stated that the stalled peace negotiations, which he opened up in 2012 in an attempt to bring to an end more than 30 years of armed struggle for Kurdish autonomy, would not restart. Military operations, he declared, would continue ‘until the very last rebel is killed’. 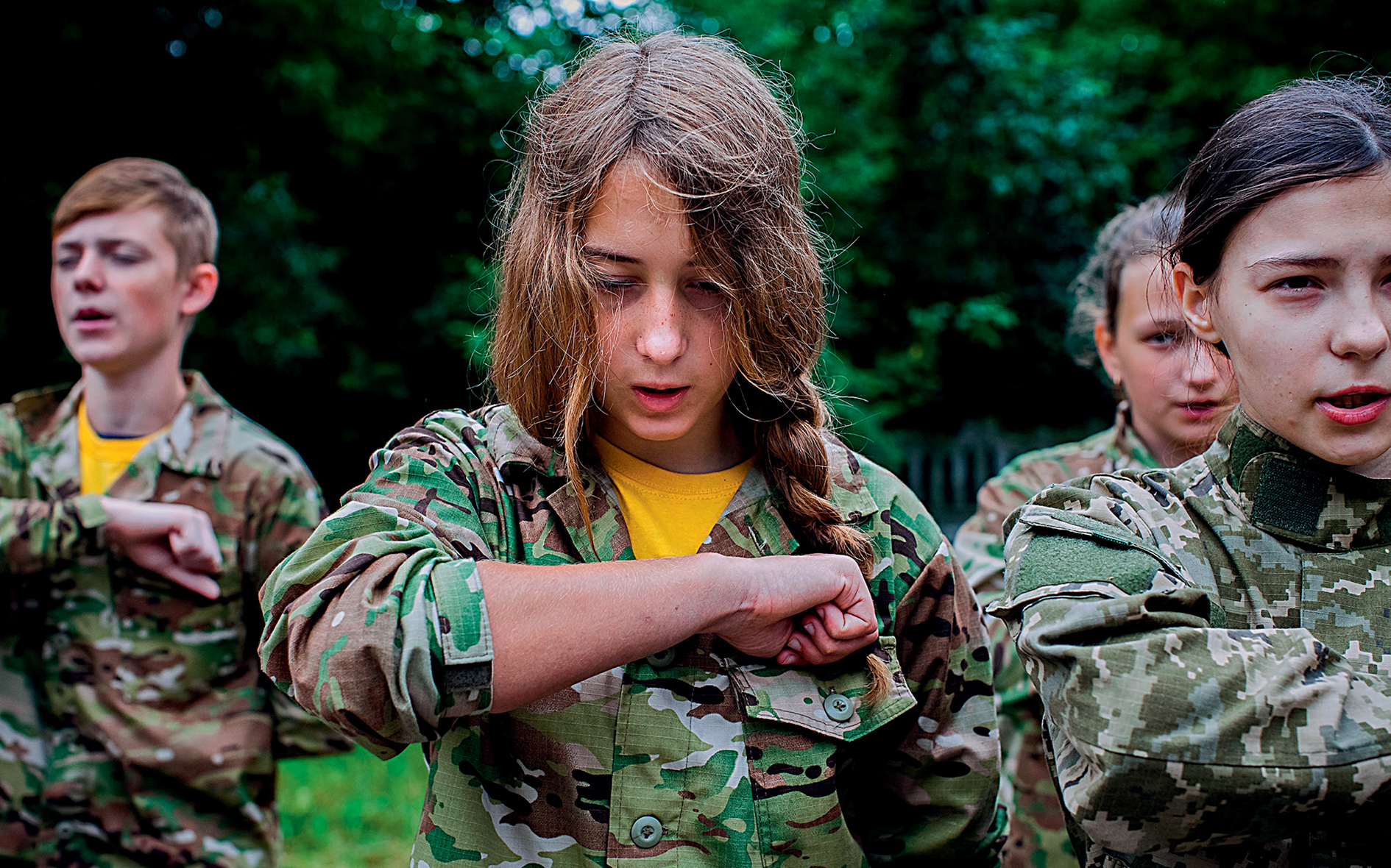 Children at a summer camp in Azov hold their arms across their chests as they chant: ‘Ukraine, holy mother of heroes, come into my heart... You, holy of holies, are my life and my happiness.’ As the war between government forces and pro-Russian rebels continues, the next generation of fighters is being prepared for battle. In August, 50 youngsters aged 8 to 16 attending the camp were taught how to shoot and handle weapons. They also received survival training and tactical knowledge of combat scenarios. The total number of deaths in the conflict reached 9,700 in November. 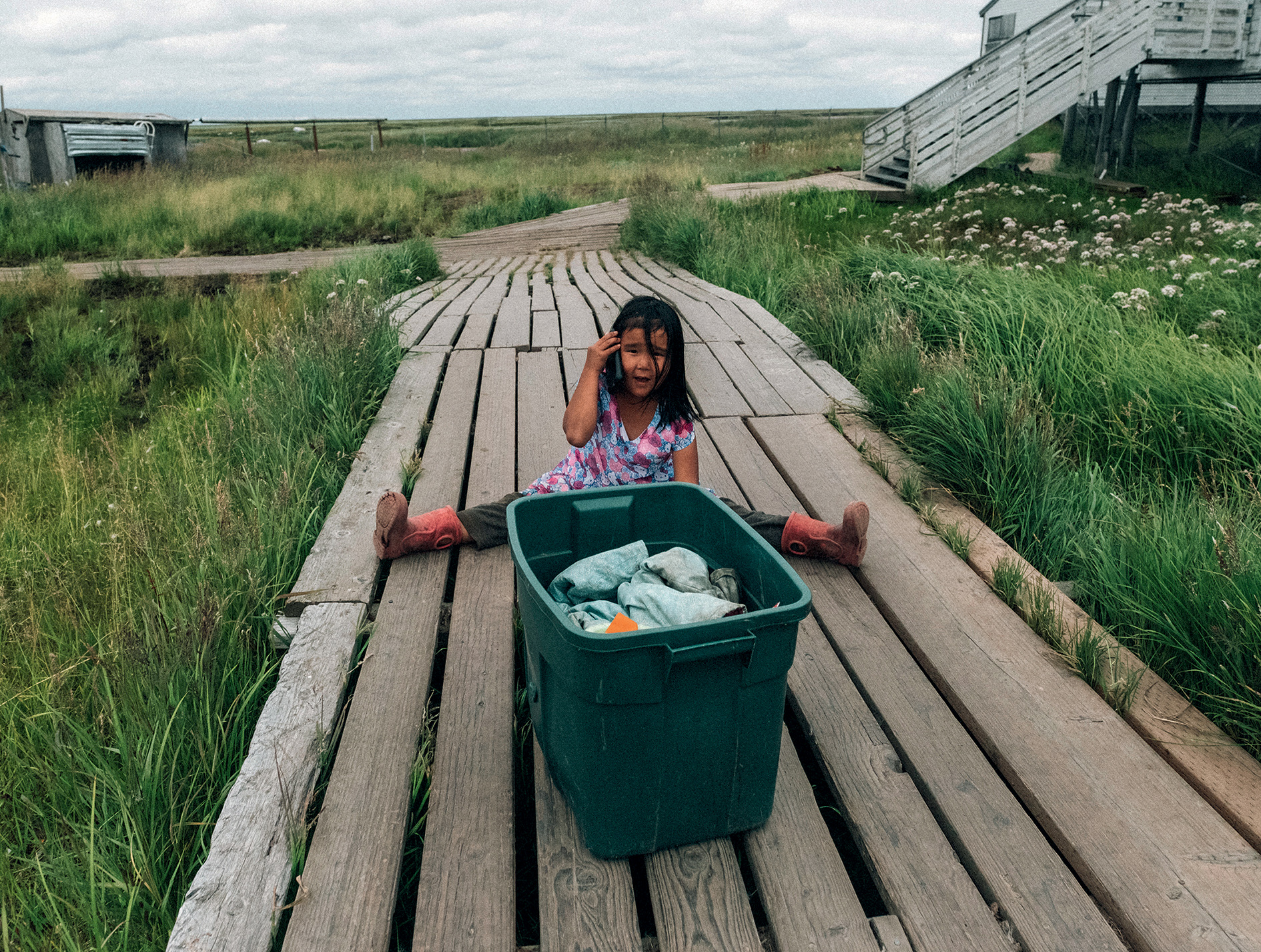 A young resident sits on an elevated boardwalk in the indigenous Alaskan village of Newtok, July 2016. The permafrost – frozen ground which covers most of the US’s northern outpost – is melting because of climate change. The ground sinks as it thaws, causing damage to roads and buildings and releasing huge amounts of greenhouse gases. Newtok’s 350 inhabitants were due to be relocated in 2013 but the programme was halted due to local political disputes. The village’s highest point – the local school – could be under water by the end of 2017. 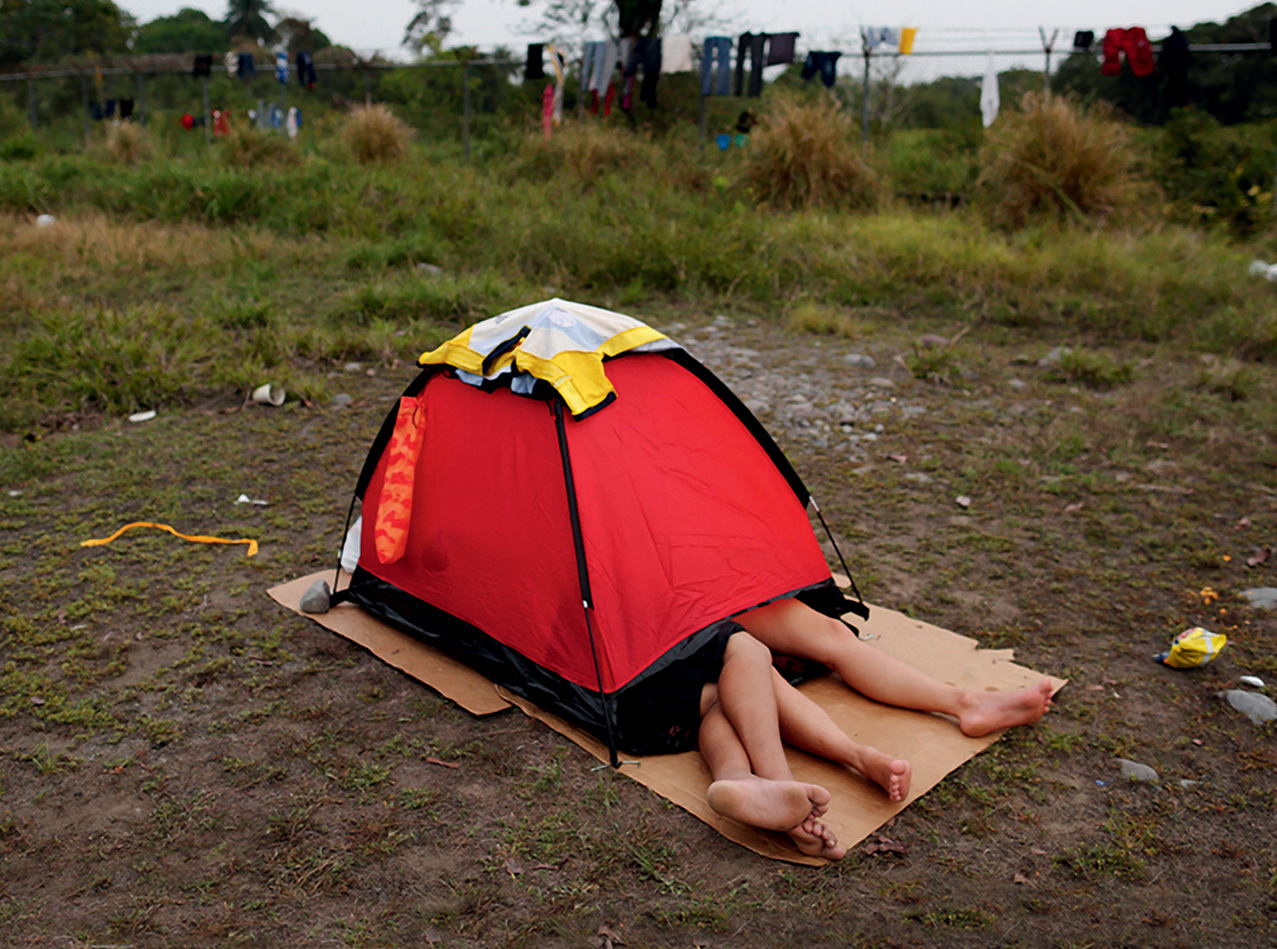 A Cuban migrant couple rests inside a tent at a provisional shelter in Paso Canoas. Some 8,000 Cubans were trapped in Costa Rica at the beginning of the year, waiting for Nicaragua to let them continue their journey to the United States. US law currently allows Cubans the right to remain if they can reach the country, but Donald Trump is likely to challenge this once he gets into office. In February he told a reporter that allowing Cubans special access under the 1966 Cuban Adjustment Act is ‘wrong’. Within days of Fidel Castro’s death in November, he had also threatened to reimpose sanctions on the Caribbean island. 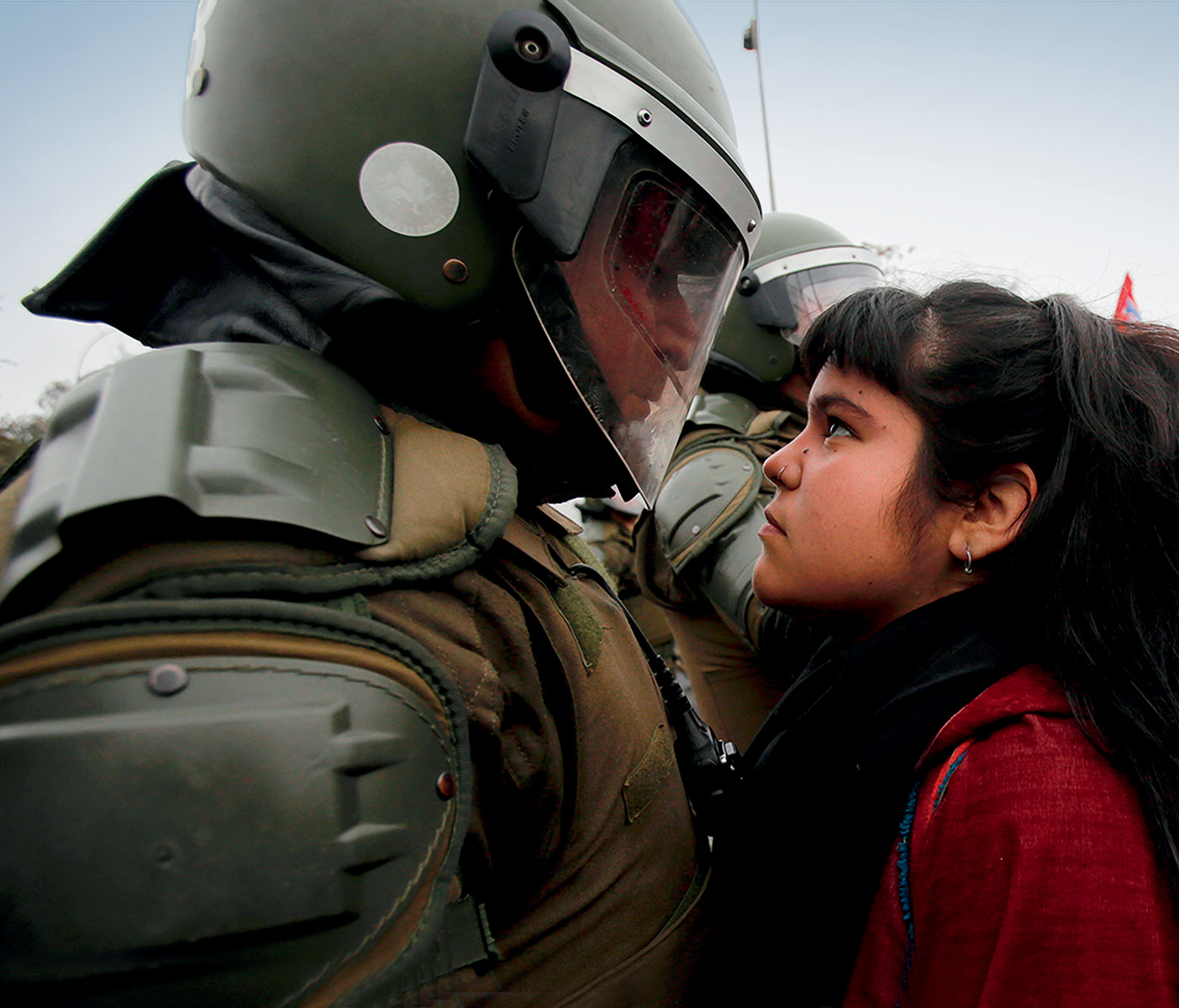 A demonstrator looks a riot police officer in the eye during a protest to mark the anniversary in September of the country’s 1973 military coup. This photo went viral on social media, with some commentators likening the girl’s defiance with that of the man who stood in front of a tank in Tiananmen Square in China in 1989. But Chileans took to the streets for many other causes too in 2016, including students calling for educational reforms; taxi drivers protesting against on-demand car service Uber; the fishing community wanting government action after a ‘red tide’ algal bloom that made seafood toxic; and hundreds of thousands to voicing their anger about the pension system. 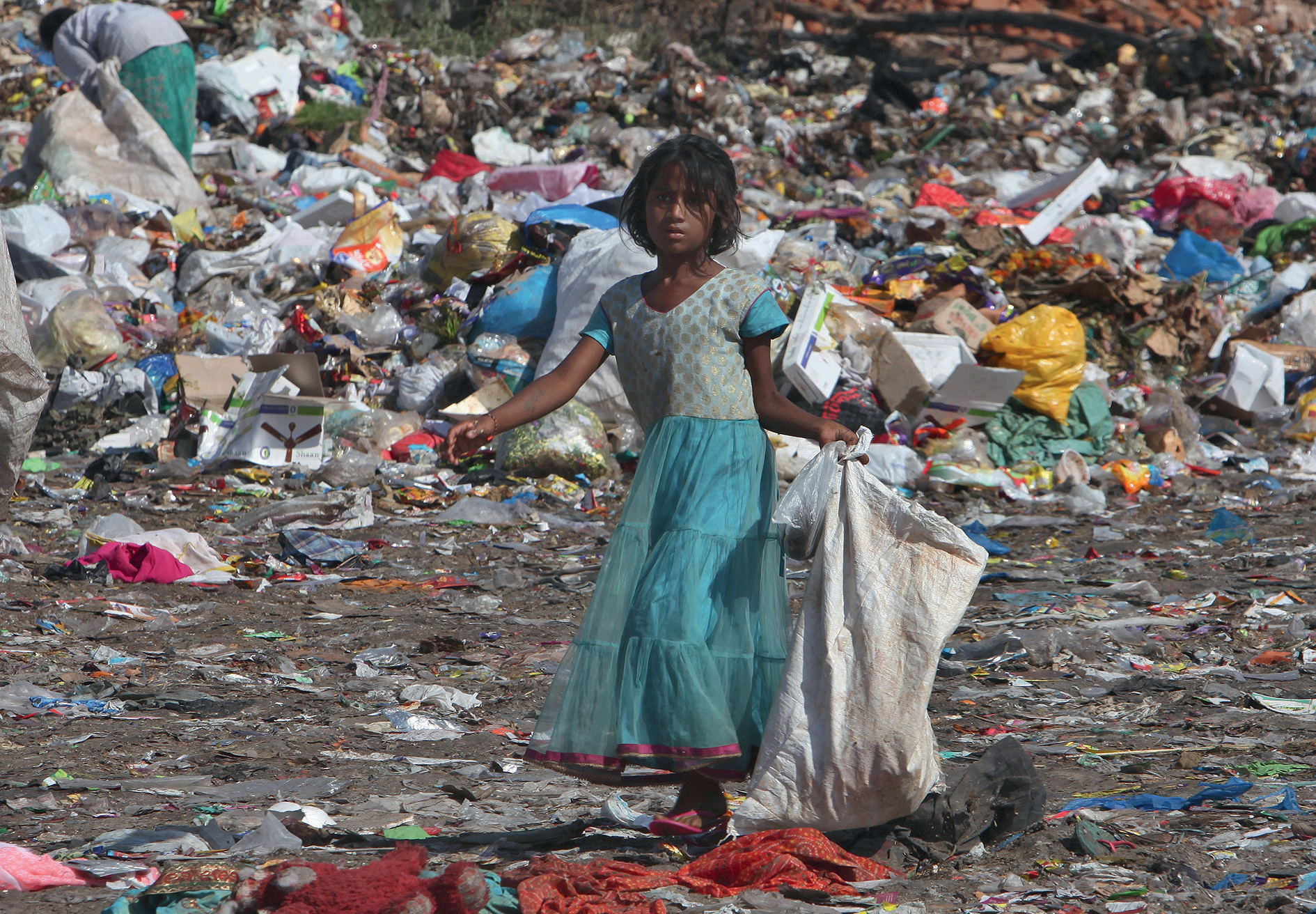 A rag-picker collects reusable material from a garbage dump in Hyderabad, October 2016. That same month, a stand-off between city officials and legislators halted refuse collection in Vijayawada, leaving rubbish piled high in the streets. But this represents just a small part of the country’s garbage crisis: India generates 140,000 tonnes of waste every day, much of which ends up in landfill. Only 83 per cent of waste is collected, and only 29 per cent of that is treated. In January, a fire at a landfill site in Mumbai, which has rubbish piled 18 storeys high, was so large that its smoke was visible from space. 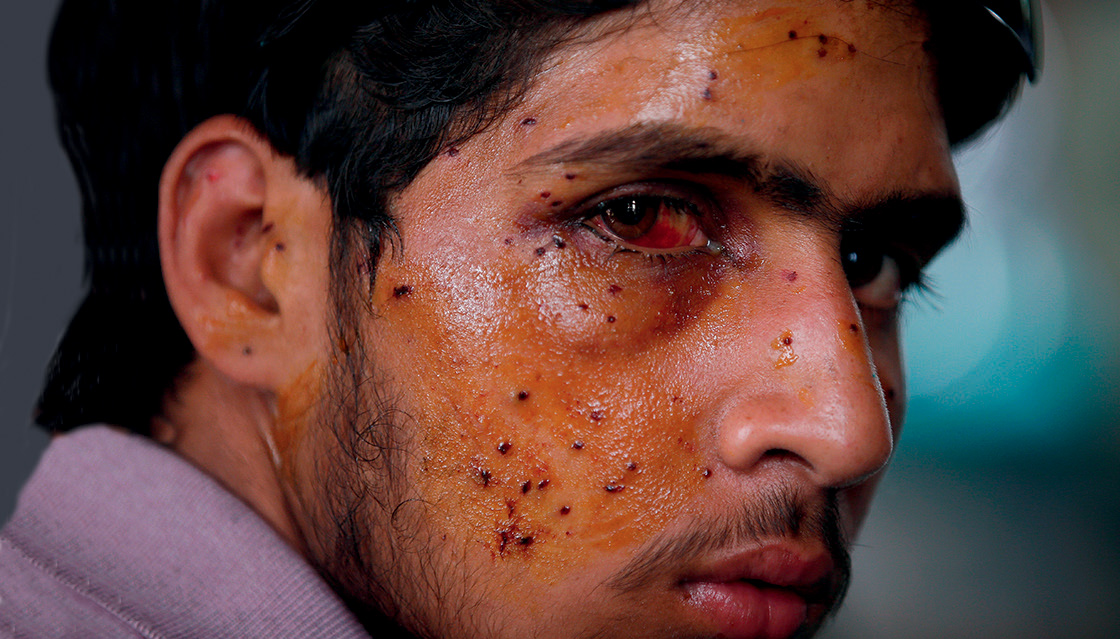 A man injured in clashes between Indian police and protesters in July sits inside a Srinagar hospital. Kashmir experienced a summer of heightened violence and unrest following the killing by Indian security forces of Burhan Wani, a leader of Kashmiri separatist group Hizbul Mujahideen. In the aftermath of the murder, widespread protests led to 85 deaths, with 13,000 protesters and 4,000 security personnel injured, according to The Times of India. The Indian-controlled region was put under curfew in July, with the restrictions continuing into November in some areas. 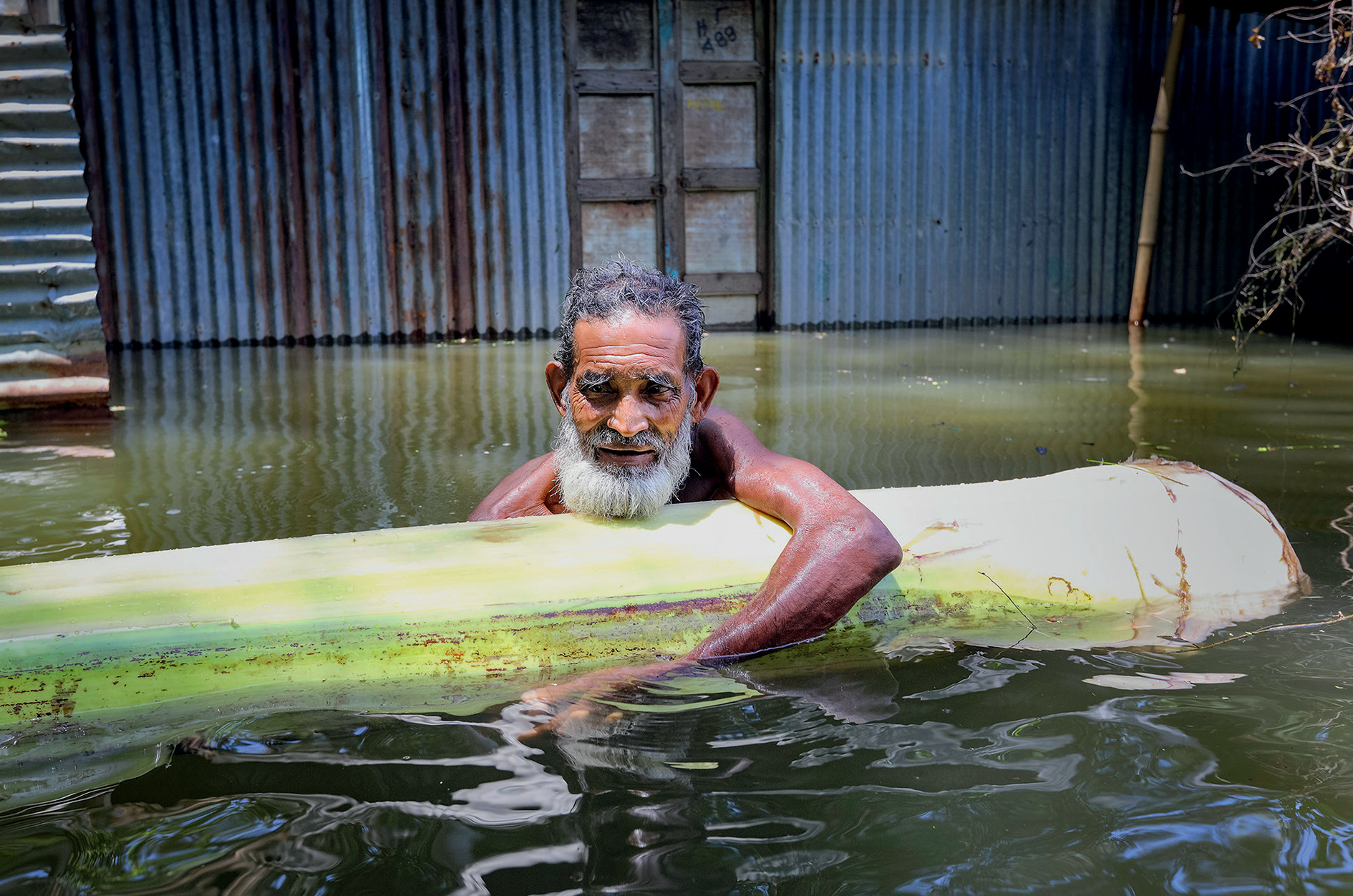 Moin Miah, aged 75, holds on to a banana-palm stem as he floats in flood water looking for his lost belongings. Millions were affected by monsoon floods that hit northern and central Bangladesh in July and August. At least 250,000 homes were damaged, and 17,000 were washed away completely. According to the 2016 World Risk Report, which calculates disaster risk by multiplying vulnerability with exposure to natural hazards (cyclones, droughts, earthquakes, floods, and sea-level rise), Bangladesh is the fifth-riskiest place to live, after Vanuatu, Tonga, the Philippines and Guatemala. 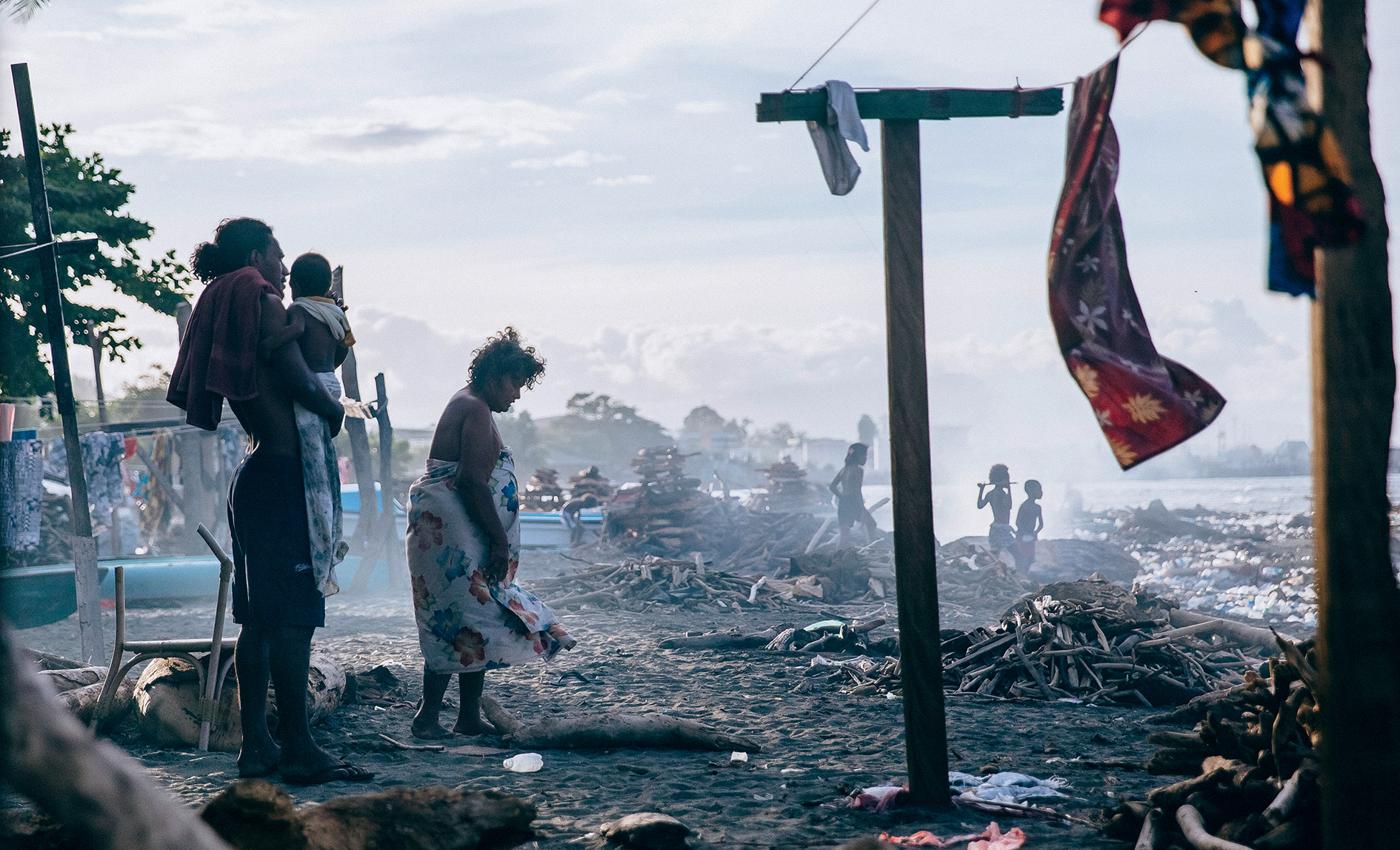 On Guadalcanal island in the Ontong Java Atoll, inhabitants of Lord Howe Settlement gather on the beach. The settlement is vulnerable to storm surges and rising sea levels, and its population is now considering relocation to the capital, Honiara. But with only 2,400 people speaking the local Ontong Java language in a country with 69 indigenous languages (plus the official English, spoken by just two per cent of the population, and Solomon Pidgin, its lingua franca), community leaders are concerned that their Polynesian identity and tongue will be lost as a new generation grows up in a location with no link to their ancestral land. 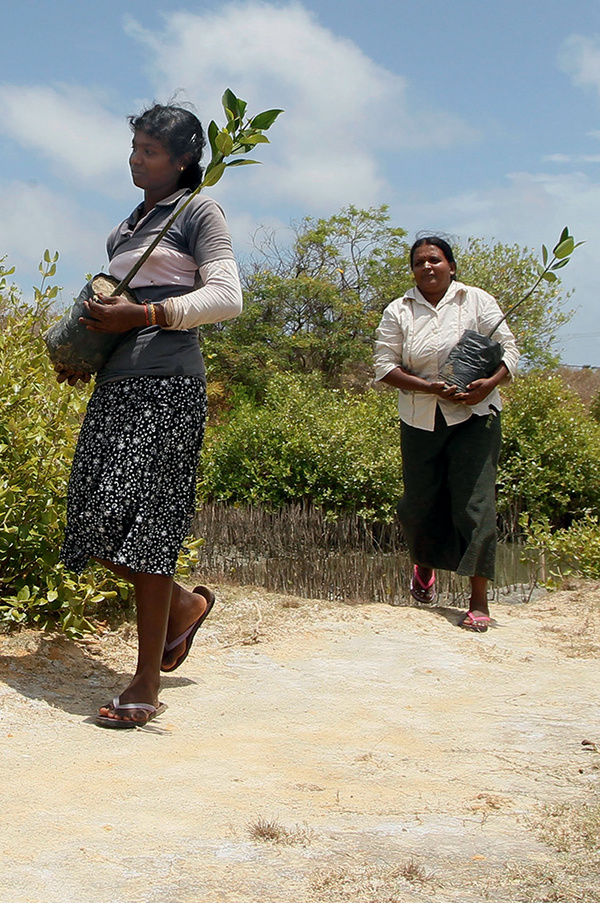 Conservation workers carry mangrove saplings for planting in Kalpitiya, as part of an ambitious plan to protect 15,000 hectares of mangrove forests. The seawater-tolerant trees help protect and build landmasses and absorb carbon to mitigate the effects of global warming. They can also reduce the impact of natural disasters, as was seen when the Asian tsunami hit the island’s eastern coast in 2004. Since then, mangroves have been protected areas, and cutting the trees down is punishable by law. In July 2016, President Maithripala Sirisena opened the country’s first mangrove museum. 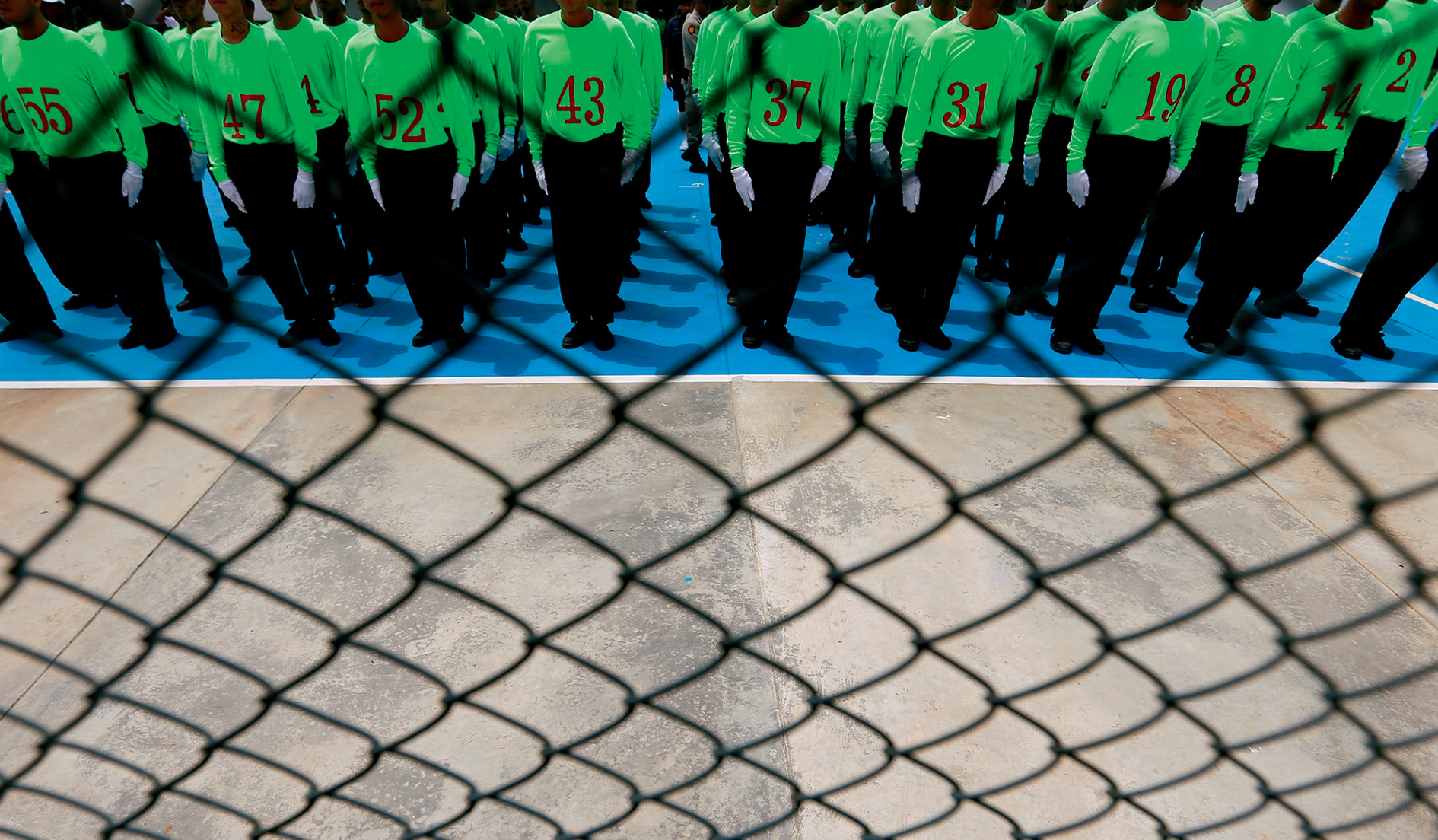 A harsh regime: inmates working out in a yard inside Klong Prem high-security prison in Bangkok in July. In October 2016, Thailand’s prison population was just under 300,000, or 443 per 100,000 people in the country (Canada has 114 per 100,000; the US 693). They were squeezed into 144 jails with an official total capacity of 217,000. The country’s Justice Minister, Paiboon Koomchaya, admitted in July that the government’s draconian drug laws were failing and said he wanted to downgrade methamphetamine from a Category 1 substance, thus reducing prison terms for dealers or those caught in possession of the popular drug. 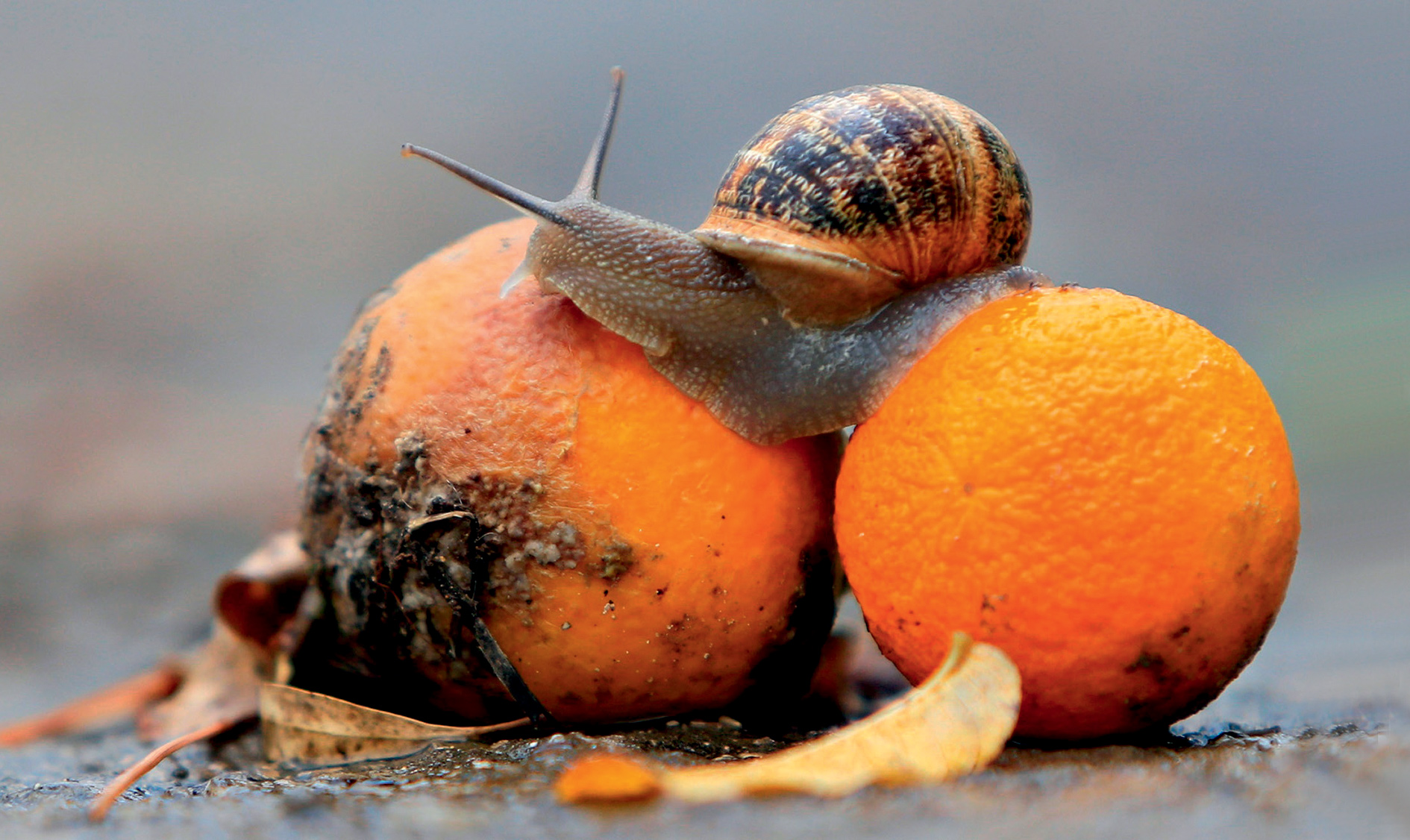 A snail sits atop rotting oranges following much-needed rain in southern Lebanon in November. A report released by NASA in March revealed that the eastern Mediterranean drought, which began in 1998 and continues to affect Cyprus, Israel, Jordan, Lebanon, Palestine, Syria and Turkey, is the worst in the last 900 years. Scientists studied tree rings – which are thin in drought years and thick in years when there is plenty of water – to see if the current drought is unusual. Their conclusion, said lead author Ben Cook, was that it ‘had some kind of human-caused climate change contribution’. 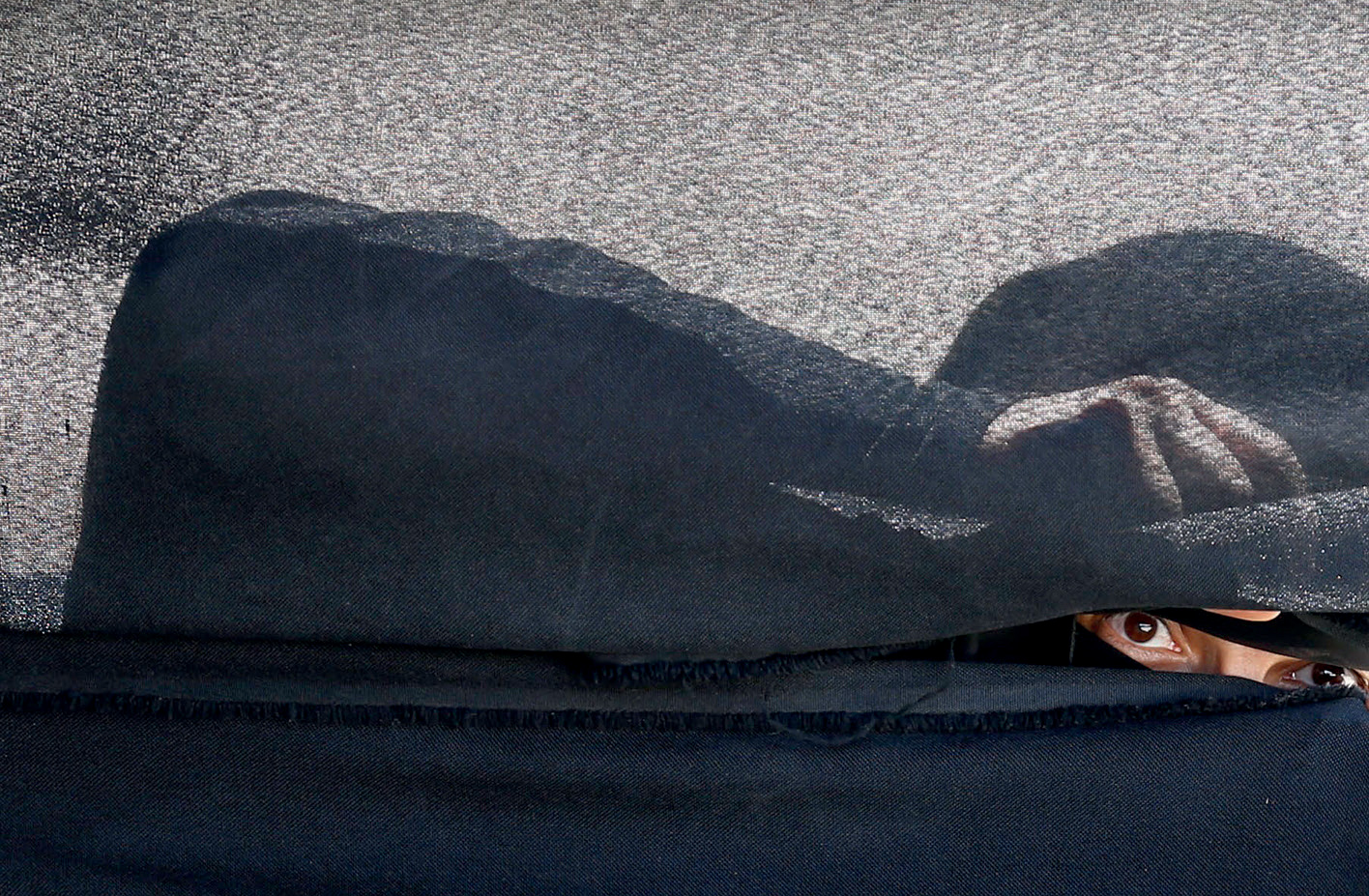 A woman looks through a tent flap during a March gathering of Houthi loyalists protesting against Saudi-led air strikes in Yemen’s capital, Sana’a. In September, a Houthi source told the Al Arabiya News Channel that the first women’s militia unit had been formed. Women in Yemen have long faced discrimination and violence, but the civil war has made them more vulnerable: the UNFPA reported that there were 8,031 recorded incidents of gender-based violence between January and September 2016, with the real figure likely to be much higher given the social norms that discourage women from reporting such abuse. 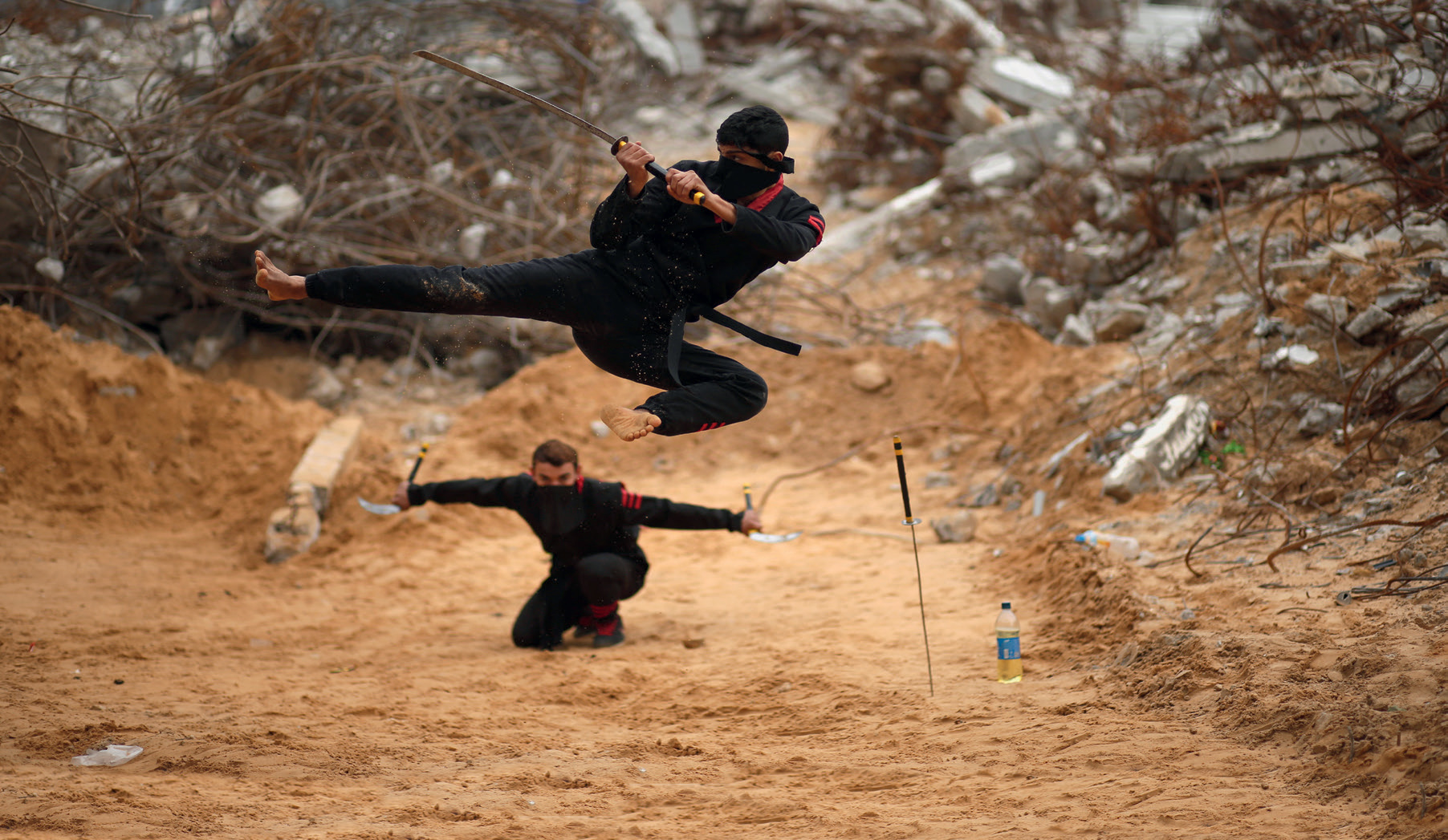 Ninja style: a Palestinian youth in the Gaza Strip jumps with a sword as he demonstrates his skills in front of the remains of buildings that were destroyed by Israel in 2014. The teenagers, who have been receiving martial arts training at local clubs for the past two years, have decided to form a team to hold regular shows, in the hope that the publicity generated will eventually lead to them being invited to participate in international contests. With youth unemployment in Palestine at 42 per cent in 2016, many youngsters face poverty and frustration.

Great Expectations
Sabtenga: modernisation knocks on the gates of tradition
Back