Mariama’s sons are all trying to make their way in the wider world. But how do you explain to Africans that the rich world is now shutting its doors to migrants? 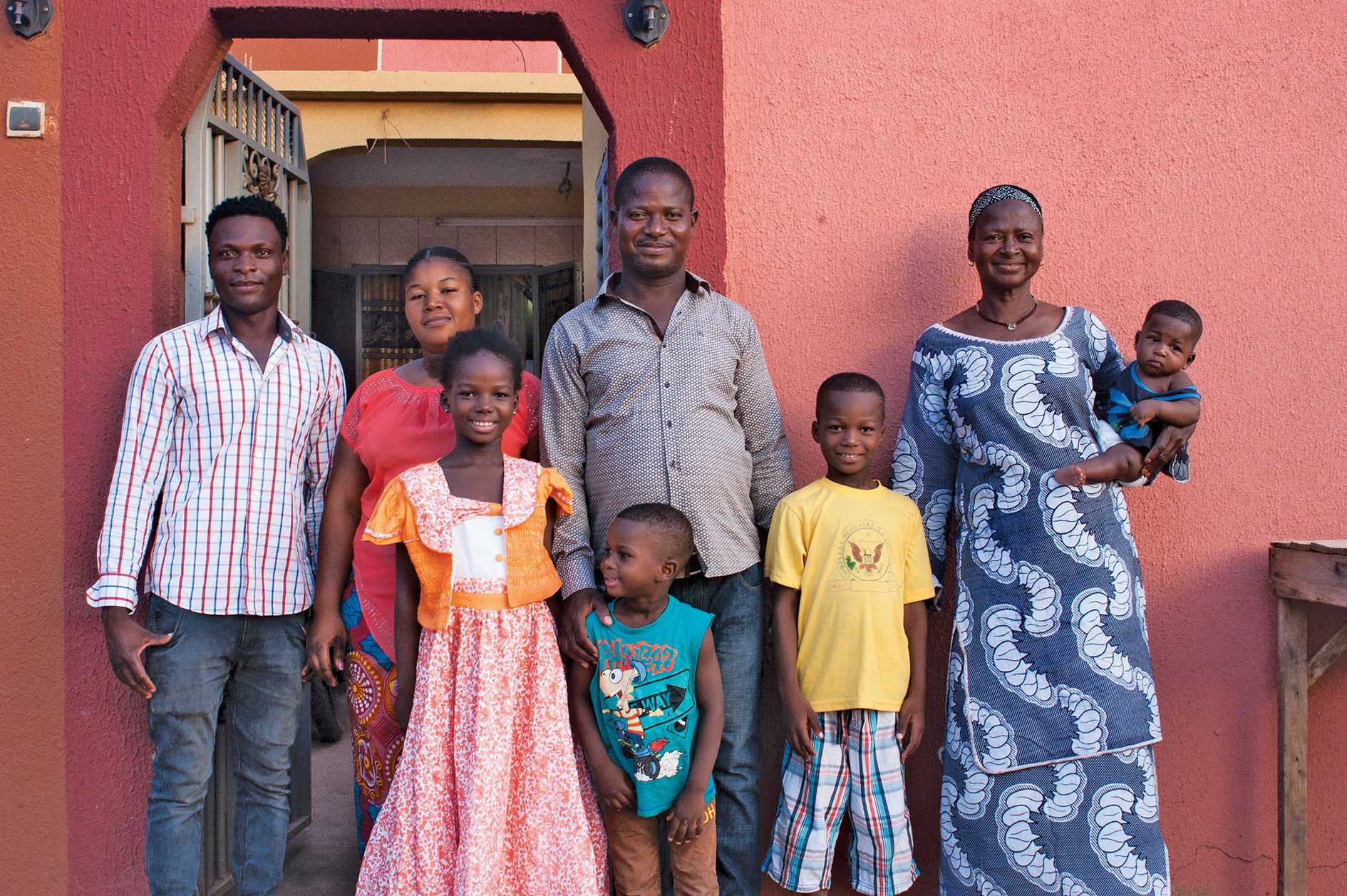 A newly prosperous family: Oumarou (centre) with his wife Bintu and (from left to right) Kadijamila, Abdul Gani Rayan, Muhammad and (in his grandmother’s arms) Issa Arif. Oumarou’s younger brother Ousmane is on the left.
Photo: Chris Brazier

When I last met Oumarou, Mariama’s eldest son, in 1995, he was 17. I ended up spending quite a bit of time with him and he regularly expressed his frustration with village life. His peers were already spending the dry season away, earning money in Ghana or Côte d’Ivoire, and would return to find ‘good old Oumarou’ still at home ploughing the same furrow. He was still at school but had already had to repeat a year and doubted that it would justify the expense of his continuing for much longer. His father was keen to groom him for the role of working in the fields as the main family provider, but he was plainly itching to get away.

By 2005 he had made that break and was living in the capital, where he was working in a relatively menial role in a bakery. I intended to catch up with him to see how he was doing but it somehow never happened. This time I am determined to meet him, not least to gain his perspective on how sustainable village life now is.

Without exception, all of Mariama’s sons have followed his example and left the village to seek their fortune elsewhere. Bubakar worked for some years in Abidjan before his boss, a Lebanese Arab, invited him to Beirut to work for him there – and that is where he is still, though his wife is currently living in Mariama’s house. Ousmane and Zakariya have also been trying to make their way in Abidjan, and their sister Aseta is well established there too, with her husband and children. But Oumarou has stayed in Ouagadougou, in part at least because he feels a responsibility as the eldest to remain in close contact with his family and home village.

When Oumarou picks us up in the capital it is at the wheel of a BMW. I express some surprise at this and ask who it belongs to, assuming he has borrowed it in order to make an impression. He gives me a complicated explanation that I don’t quite understand over the noise of the traffic, so I sit back and wait for clarification later. He drives us to a new suburb on the outskirts of Ouagadougou, though shanty town might conjure up more nearly what confronts us – a maze of rubble-strewn dirt tracks with a phantasmagoria of improvised accommodation and children playing on the street. In amongst the poorer dwellings, however, are more substantial houses catering for the new middle class, and it turns out that Oumarou’s is one of these.

He takes us in to meet his family – he is now married with four children – and I am staggered to be presented with the most enormous TV screen that I think I have ever seen in a home. It is, admittedly, quite a small living room but the TV on the wall completely dominates it – and over dinner our conversation is carried on with its disconcerting sound and vision beside us, being drunk in by Oumarou’s own children and those of his neighbours.

Essentially, Oumarou has made good – and has successfully expanded his horizons and those of his family. He worked as a labourer on construction sites for three years, then in the bakery for six years before he seized the moment and followed his entrepreneurial instincts. His great stroke of luck was that he met a Burkinabè who had just come back from Italy with a container full of consumer goods that he wanted to sell quickly and who involved Oumarou as an agent for these sales. That gave him the opportunity effectively to create his own import business. He started off buying and selling individual motor scooters and motorbikes. These are generally bought second or third hand at 12 or more years old, at which point they have next to no market value in the West, though they often still work perfectly well, and are then shipped to west Africa, where they are sold on at a profit to the expanding middle class.

Gradually Oumarou was able to work up from motorbikes to cars, starting off with Ford Focuses but then graduating to higher-value makes – first Nissan and now Toyotas, BMWs and Mercedes. The BMW he was driving is one that he is currently trying to sell – and would only drive himself on extraordinary occasions. He recently moved to this rented house, which is clearly a symbol that he has made it, as are the leather sofa and TV, which also came from Italy. He sends his children to private school to give them a head start – just round the corner in the midst of this new suburb, catering for new middle-class families just like his.

What was once a journalistic project that emphasized the vast gulf between rich and poor worlds is now showing how fundamentally, inextricably intertwined are those two realities

Oumarou’s new circumstances are a shock to my system – a salutary shock. Even while in the village this time, and despite all the material improvements I have chronicled, I have nevertheless still tended to slot it into a mental framework marked ‘poor and in need of charity’. And, to be honest, Mariama and Issa have played up to that, always emphasizing their lack of means.

This casts things in a rather different light. The boys have clearly been sending money home – especially when their father was ill in 2015. Both Oumarou and his younger brother Ousmane are scornful of the idea that their dad needs to keep working in the fields in order to put food on the family table; from their perspective he does it because he wants to, because it is what he has always done. It’s also clear that I have stirred up something of a hornet’s nest by giving gifts to some members of the family and not others. From our perspective, we prioritized the girls who didn’t have the opportunities to make their own way that the boys did. But from their point of view, they would ask why on earth I gave a gift to Rasinatu, who is already looked after by her husband, rather than to Ousmane, who has struggled to make his way and will not marry until he does so, and who is about to embark yet again on a new and perilous attempt to establish himself in Côte d’Ivoire. Plenty of food for thought there, and some difficult questions to answer.

But meeting Oumarou helps put other things in perspective. It has always been the case that money in this subsistence-farming community is something that comes from elsewhere – most often from work in Côte d’Ivoire. And this is all the more the case now – it’s just that the net is cast much wider, to Europe and North America, and everyone is keen to take advantage of any connection they have that might help them to improve their material situation.

A perilous endeavour that paid off 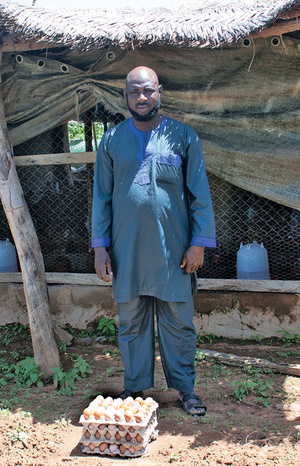 Issaka in front of his hen house with a sample of the eggs it produces. I never understood before this trip that indigenous African hens rarely lay eggs; Issaka’s come from France.
Photo: Chris Brazier

The villager in the photo (right), Issaka, is a case in point. A few years ago, he somehow made his way to Europe via North Africa. He is vague about exactly how, but may well have made the perilous migrant boat trip from Libya. He eventually wound up in Italy, where he persuaded an employer to vouch for him and complete all the paperwork that enabled him to work there for two or three years. Now he has come back to Sabtenga – and he says that this was always his intention, but that he needed the head start that money from Europe would give him. But it wasn’t only the money that made the difference. He also needed the new sense of perspective that Europe gave him. He has now started his own egg business.

I never knew this before, but indigenous African chickens usually don’t lay eggs – or, rather, only lay a few each year. European chickens have been bred to maximize their egg-laying potential and Issaka is now raising French hens and collecting their eggs daily for sale in Garango. He will soon have to sell these 18-month-old hens for meat and start again with new chicks – but he plans to build a second hen house soon, which will ultimately allow him to have eggs for sale every day of the year.

It is this kind of sustainable business that the Chief is trying to promote, that will give new life to Sabtenga beyond subsistence farming. He is encouraging others to raise their own goats for sale as meat, for example, and he thinks eggs will help improve the village diet. But Issaka’s particular business could not and would not have happened without migration.

So the overall message from this magazine is very different from the previous ones. What was once a village utterly on its own, disconnected from all the wealth and scientific advancement of the modern world, is now fundamentally part of the global community, interlinked with the rich world in myriad complex ways. Globalization and ‘development’ – in all its manifestations – have had a phenomenal impact, and there is no doubt that they have improved the quality of life. Nobody would choose to turn the clock back. Life expectancy in Burkina Faso as a whole has improved from 42 to 59 over the past three decades and is still rising.

But you simply cannot bring Africa into a global system based on free trade, encourage its people to think beyond their traditions and embrace a new way of life, and then shut all the gates, as Europe and the rest of the rich world are currently doing, denying them freedom of movement and access to the kinds of opportunities that can transform things for them at home.

I never would have expected it, but what was once a journalistic project that emphasized the vast gulf between rich and poor worlds is now showing how fundamentally, inextricably intertwined are those two realities. To the extent that Sabtenga is a typical African village, it contains people who are keen to make good on the promise that has been held out to them, that they and their country will be able to trade their way out of poverty. It is the hardest thing in the world to convey to them that people and governments in rich countries – in Britain and the US most of all – seem to be changing their minds about belonging to One World, have become suspicious of, even hostile to, migration, and now see Africa as a threat.

We owe it to these people to turn back this tide and to keep ourselves open to the world. 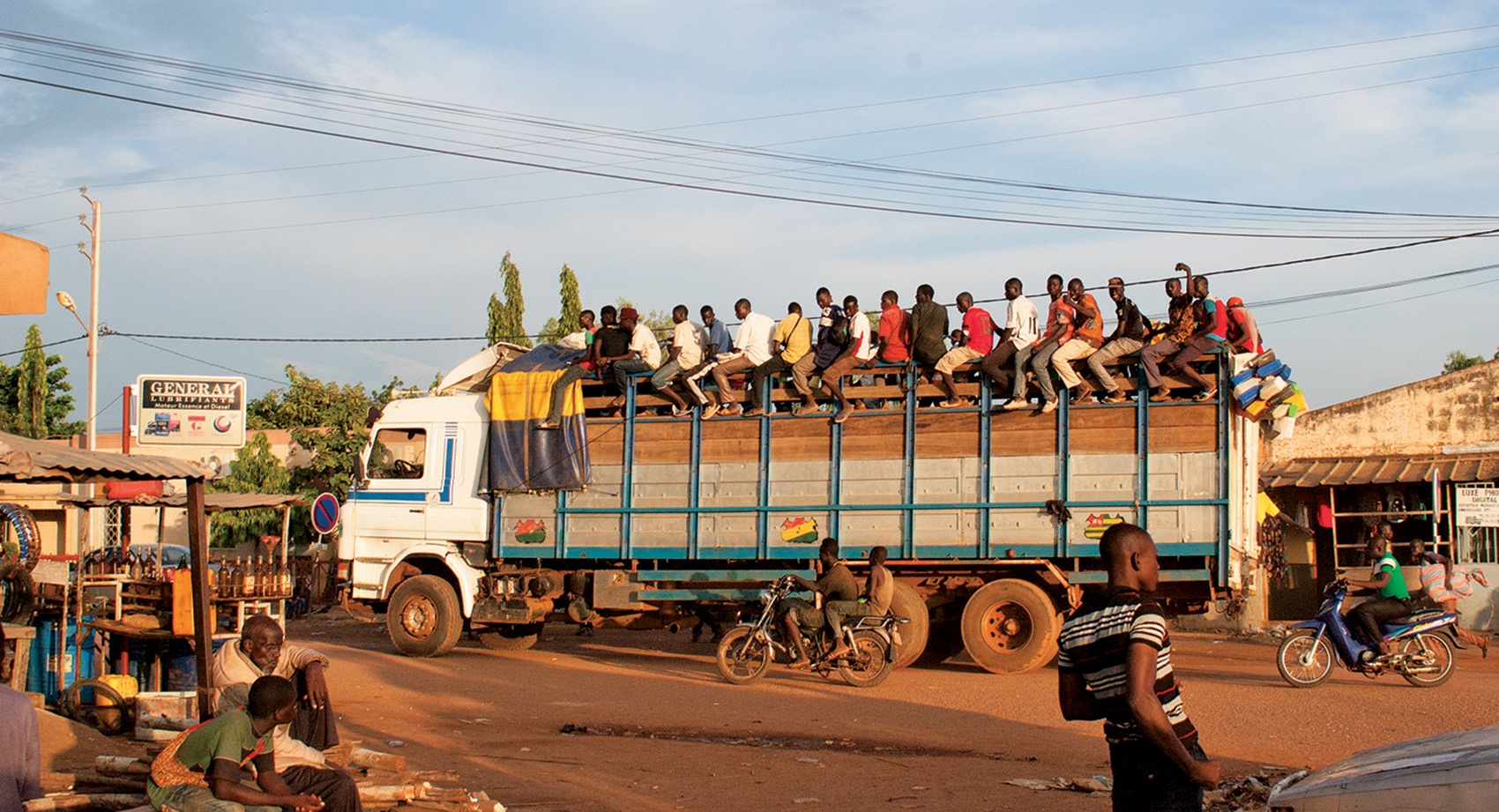 People on the move. A truck with a full cargo of goods and people sets off from the centre of Garango. Young men in particular are determined to seek their fortune in the wider world.
Photo: Chris Brazier

The Perils of Charity
The Unreported Year 2016