Autumn of the Patriarch

The latest instalment in the lives of Adama, his four co-wives and their 26 children. 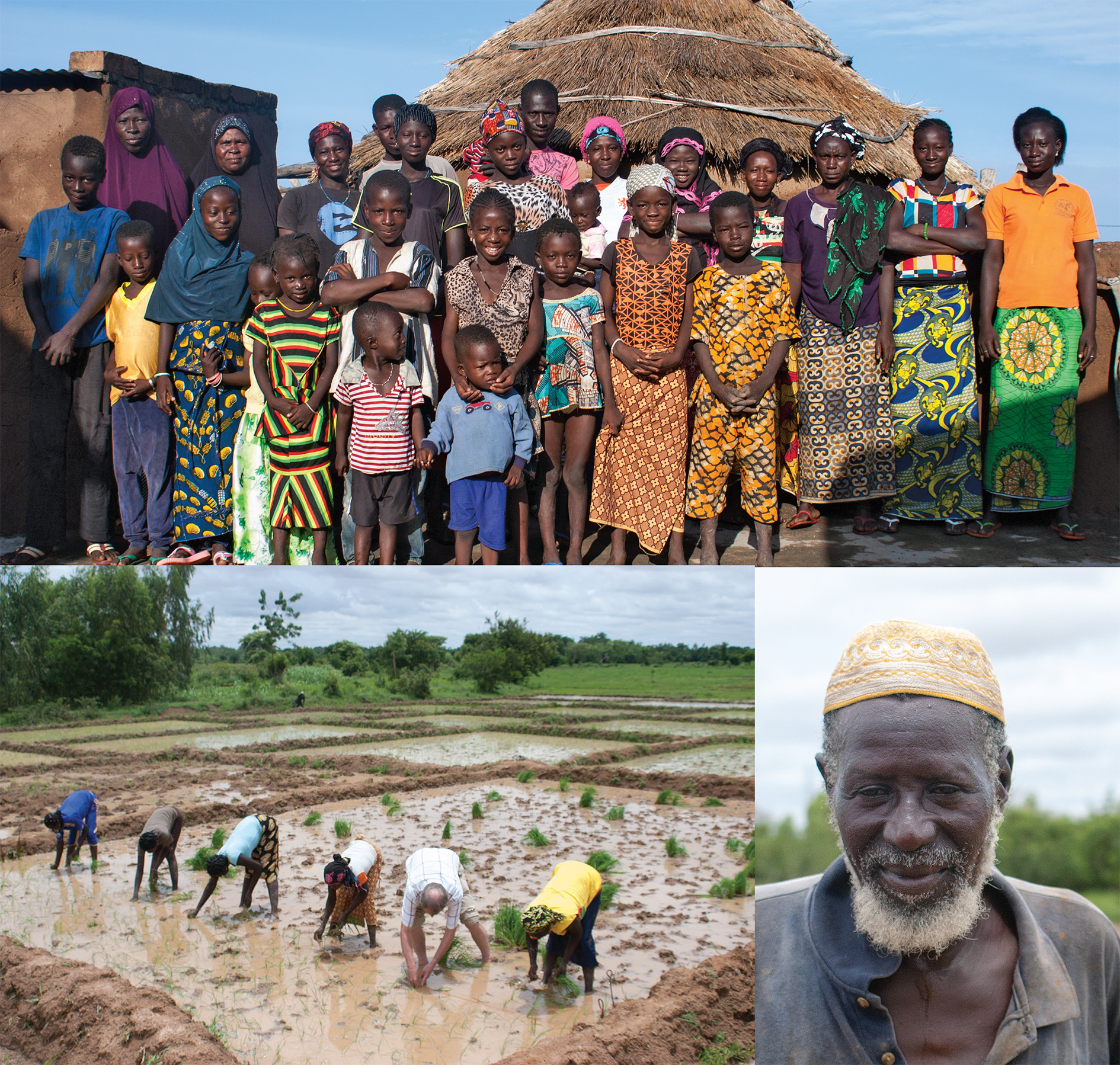 (Bottom right) Adama today, now aged 73. (Bottom left) His granddaughters are set to work – with a little help from a friend. (Top) Adama’s four wives with an assortment of their children and grandchildren. Meryam, Zenabou and Bintu are at the back on the left, with Kadiguiatou third from the right. Mwadisa is in the middle, with red on her headdress, and Alimata is on the far right. A full range of photos of this family from 1985 to 2016 is available at nin.tl/villagehub

The family of Zenabou and Adama live in an outlying area of Sabtenga called Bidiga. We based ourselves there in 1985 while making the film that told Zenabou’s story. She was the daughter of the Chief in Garango and was considered to have married beneath herself when she fell in love with Adama. By the time we met her, Adama had taken a second wife, Meryam, and we were there for both the birth and the baptism of her new baby.

When I returned in 1995, I lived in the same hut, just up the hill from Zenabou’s concession. I had been there for more than a week before I made a jaw-dropping discovery. As I chatted to Adama, a girl I had previously assumed to be a guest – or possibly a daughter – wandered past us and straight into his house. This seemed rather familiar, so I leaned over to ask Adama who she was. It turned out that this was Bintu, his new, fourth wife, who was just 16 years old.

Somehow, even when you know you are in a society where it is common for a man to take more than one wife, the reality is still constantly surprising, so fundamentally different is our conception of the relationship between men and women. And the notion that Adama, then 52, should have taken a fourth wife – let alone one young enough to be his granddaughter – seemed extraordinary. Stranger still, Adama explained that Bintu was the daughter of old friends who had first offered her to his son Hamaru. When Hamaru turned her down, Adama took her on instead. The element of ‘charity’ involved in this had, it seemed, soon been overcome – Bintu did not even have her own bedroom yet but spent every night with Adama, which prompted some gentle banter from her co-wives, who might normally have expected to be sharing their husband’s favours more equally.

’Younger men are so silly‘

When I asked her directly, Bintu said she preferred older men because younger ones were so silly, and she certainly did not see herself as an exploited child bride. She and her parents would have agreed to the marriage on the basis that it was a sound economic decision – Adama was a good provider who was also highly respected locally as a marabout (lay Islamic preacher).

And those economic expectations have not been disappointed. I have been struck on every visit by how enterprising – entrepreneurial, even – Adama is as a farmer. I must confess that, looking back, our film Man-Made Famine somewhat traduced him. We were making a vital point about how African women grew much of the food but were generally ignored by governments and aid agencies. And there was an iconic moment in the film when Adama brazenly accepted that women worked more than men: ‘I can see for myself that she is tired, that she works too hard. But tradition and habit stop me from helping her. It is a woman’s place to do that work. I don’t see why I should help her.’

Even when you know you are in a society where it is common for a man to take more than one wife, the reality is still constantly surprising

But Adama was referring primarily to domestic work, and there is no doubt that he takes primary responsibility for the farming and has not been shy of bearing the brunt of the hard labour himself. It is hard to find a time to talk with him because he is always out in the fields somewhere. One day, I get his granddaughter Mwadisa to take me to the fields to find him. This involves quite a long journey to a parcel of land on the other side of the main road, where water from the reservoir has been channelled into a stepped, jigsaw network of ricefields. The sophisticated use of irrigation is a revelation to me, something I have not seen before in the village – and I might previously have thought wet-rice cultivation of this kind to be impossible in this arid locale.

Rolling up trousers to get stuck in

As usual, Adama is more concerned to get on with his work than to waste time chatting to me, and he puts his back into turning over the soil in preparation for his daughters to transplant the rice plants from their seed bed. I feel uncomfortable sitting in the shade doing nothing so, when one of the girls mischievously suggests that I help them, I strip off my shoes, roll up my trousers and join in, rather rashly disregarding the risk of being invaded by the schistomiasis worm. As when I picked cotton with the family in 2005, they are delighted that I am prepared to muck in.

Adama says that he cultivates these ricefields as part of a farming co-operative; he also says he heads up the association responsible for the dam, which clearly gives him an advantage over the farmers on the other side of the village, where such irrigation would be impossible. He has used chemical fertilizer for decades instead of just switching to it seven years ago, as was the case elsewhere. Even in his mid-seventies, when we in the West would hope to do no more than enjoy our retirement, he is as active as ever.

So his four wives probably feel they have little to complain about in economic terms. And, while I thought I detected signs of discontent in 1995 as the older wives adjusted to the influx of younger women, possibly I was just projecting this on to them. Both in 2005 and 2016 they have followed the party line that it is good to have co-wives with whom you can share the domestic workload, and have presented a remarkably harmonious, sisterly group.

And what a family they now have! They have 26 children between them and seem completely unable to calculate how many grandchildren there are. Among them, though, are the two eldest daughters of Salamatu, whose portrait graced the cover of the 2005 magazine. She was a bright-as-a-button schoolgirl when I met her in 1995, and I made a point of asking Adama if he would pay for her to attend secondary school when the time came. He said that he would.

So one of my great disappointments on revisiting in 2005 was to find that he had not done so. She had therefore had no alternative but to marry at the traditional age of 17 and live with her husband’s family. When I visited her and her new baby in a nearby village I was struck by the change in her condition. Her husband was in Côte d’Ivoire seeking work and she had no indication as to whether or when she would be able to join him. In the meantime she was living with her in-laws in what seemed much less salubrious conditions than her own family enjoyed.

Fortunately, the news is a little happier this time. Salamatu is now with her husband and her third child in Abidjan; her daughters Mwadisa and Leila are living with their grandparents so that they can go to school in Sabtenga. And maybe Adama has had a change of heart on girls’ education, since Alimata, one of Bintu’s daughters who worked alongside me in the ricefield, is still at school at the age of 21, and pursuing her dream of becoming a pharmacist or a nurse.

An Audience with the Chief
The Perils of Charity