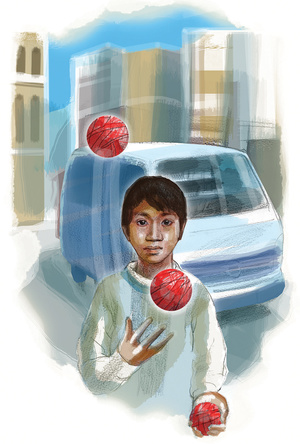 Hot, dusty and polluted, Blanco Galindo is the main road that leads out of Cochabamba towards La Paz. Trufis – the minivans or converted cars that pass for buses here – swerve crazily across three lanes of traffic. Young men in broad-rimmed hats lounge against the central reservation, squishees at the ready to wash windscreens for a pittance. Women stride between rows of cars, selling passengers frozen strawberry jelly in a tube for one boliviano (about 14 US cents).

My friend Ludwing’s car stops at a traffic light and immediately a boy walks out in front of us. He looks about 12. Almost mechanically, he starts to juggle three balls wrapped in bright-red electrical tape. His movements are automatic, his face a frown of concentration. There is no sense of showmanship. He must be tired. I wonder how long he has worked today.

The lights change and he walks between lines of accelerating cars, holding out his hand for a coin here, a coin there. The two bolivianos I give him would buy four bread rolls.

This boy is just one of many Cochabamban children who work so their families can make ends meet. If they aren’t juggling, they might be walking from bar to bar late at night, selling sweets and cigarettes, or crouched down, face hidden in a balaclava, shining shoes. My friend Escarlet became one of them.

We are sitting on the roof of the little one-room house where we both teach circus arts, out past the market town of Quillacollo. I’m helping her to learn English when we broach the subject. She goes quiet for a minute, mentally preparing herself to speak about this, and then her words start to pour out, as if pent up inside.

Worst of all was the prejudice of well-off Bolivian peers, who would jeer at her for having to work, she tells me.

Lots of people think that if you’re working on the streets as a child, it must be because your parents are making you do it, she says. But Escarlet worked because she understood that she had to, like her other siblings, to put bread on the table.

While the normal minimum working-age requirement is still 14, a law was passed in 2014 allowing children as young as 10 to work, subject to certain conditions – that the work doesn’t interfere with their education and isn’t dangerous, unhealthy or illegal. But in Bolivia, where so many laws are formed with the best intentions and there is so little money for functionaries to enforce them, many children aged 10 and well below were working before the law and still work today.

Escarlet, through Bolivia’s child and adolescent workers’ unions, was involved in campaigning for this law. In an ideal world, parents would have sufficient economic opportunity that their children did not need to work. But until that happens, this law offers child workers some legal protection.

Working on the streets, some young people get sucked into gangs, drugs and homelessness. Recently, strolling at night with a young Bolivian companion, we saw a boy of about 14.

Unsteadily, he was meandering through a central square, his clothes faded and tattered, his hair unkempt. My friend insisted we cross the road to avoid him.

‘Once I passed a child in the street and he opened his jacket to show me a carving knife,’ my friend replied. I wasn’t sure whether this was self-defence or prejudice. The boy floated, drifted, half in this world and half flying, and I felt sure he was not a menace.

Escarlet never got drawn into this world. Her family have now rebuilt their home, and she is studying in the US on a scholarship.

Bolivia has been developing at breakneck pace in recent years. Thinking back to the juggling boy, I wonder how many more years it will be before children do not need to work to survive.