Both hands on the spotlight for Rio’s favelas

The last house to be bulldozed at the Vila Autodrom favela.
© Ann Deslandes

Authentic and effective relationships are, at least nominally, the goal of all organizations and people who do international solidarity work – from the large, bureaucratized global NGO running a country-wide human rights program, to the church-based aid organization providing food and shelter to underserved communities, to the autonomous collective seeking to live in alliance outside the so-called development industry.

Working in solidarity with favela communities across Brazil’s large and unequal coastal city Rio de Janeiro, the small, independent NGO Catalytic Communities (CatComm) has made such relationships its core business.

The organization has been successful in brokering and projecting the voice of Rio’s approximately 1.5 million favela residents onto the global stage of story-telling and knowledge-making. Founded by Brazilian-British-American city planner Theresa Williamson, staffed by a small agile team supported by dozens of volunteer interns graduating from schools across North America, Europe, Brazil and Australia, including some from top schools (Duke, Princeton, and Yale are all amply represented in CatComm’s alumni list), CatComm has nurtured networks between and around favelas since its beginnings in 2000. So when the Summer Olympics came to Rio in 2016, favela communities were ready to tell the world about the terrible human cost of this mega-event. Community journalists, leaders and residents wrote on global platforms, such as The Guardian, aspring to puncture the overblown stereotypes of favelas as spaces of criminality and dysfunction. 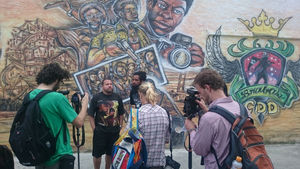 Since 2010, CatComm’s own media platform RioOnWatch has amplified this view, which is not only important for favelas fighting a century of public stigma and government neglect – in recent times experiencing what founder and executive director Theresa Williamson notes is ‘the worst sweep of evictions in Rio history’ – but it is also important for those of us living in cities all around the world. As it turns out, while Brazilian urban elites and government were maligning and mistreating them and the rest of the world was misunderstanding them, many favelas have been developing their own solutions to seemingly intractable urban problems such as poor sanitation, over-use of plastics and other non-sustainable materials, and provision of basic resources like affordable housing, child care, education, and youth programs.

Perhaps most critically, this network-nurturing and signal-boosting has played a vital role in protecting favela communities from the attacks on their existence that have intensified around the mega-events of the past few years: World Youth Day in 2013, the 2014 World Cup, and this year’s Summer Olympics. Rather than delivering aid or programs, CatComm has built relationships that allow favela residents to resist their mistreatment by telling their own stories.

Take for example events at Vila Taboinha favela in 2010. The city government had slated the favela for eviction and the residents had resisted. In November they were organizing in the wake of an agreement with the Housing Sub-Secretary to hold off on the eviction for 30 days. But the bulldozers showed up before the deadline, on 10 November, and demolitions of houses incorrectly deemed ‘uninhabited’ by the prefecture began.

Along with other civil society groups, CatComm had been providing support and advocacy to the community at Taboinha, and two CatComm volunteers – from Australia and Canada – arrived to the favela that day to film the impromptu demolition so that documentation could be used by the community to challenge what was happening. As the volunteers pulled out their cameras, they were approached by police, who took their equipment and identification. At that point, Taboinha residents began filming the apprehension of CatComm volunteers with their camera phones. This in turn prompted the police to release the volunteers and return their equipment. The driver of the bulldozer then turned the vehicle off and left, unable to carry on without police supervision. As CatComm intern Sam Faigen wrote:

‘That afternoon, the young, newly inspired journalists from the community gathered with CatComm and members of several other community groups to collaborate and exchange footage. There, on a broken pool table, as the bytes flew back and forth between devices, the knowledge was breathed into Vila Taboinha that the eyes and ears of the world could now be reached.’

Fast-forward six years to the Rio Olympics last year, when Asa Branca, a favela just down the road from the Olympic Village turned up a higher Leadership in Energy & Environmental Design for Neighbourhood Development (LEED-ND) rating than the Village itself, which had been much-hyped for its environmental sustainability credentials (and was later much-plagued).

Indeed, a consistent finding from the research and community work of CatComm is that favelas, built autonomously by residents for community use, possess many of the urban qualities our cities will need to be sustainable going into the future. As Eliot Allen (one of the chief architects who in fact developed the LEED-ND rating system) and Julia Jones (a CatComm intern) who applied the LEED criteria to Asa Branca, put it:

‘While the world celebrates the Olympics, Asa Branca will celebrate 35 years of struggle and endurance in Rio’s West Zone. Favelas are often stereotyped as chaotic and hazardous liabilities. But a closer examination reveals considerable merit in the organic and responsive environments built by residents. Compact, mixed-use buildings and pedestrian-oriented circulation networks engender the kind of vibrant, street-level cultural life and low carbon footprint that are hallmarks of green urbanism.’

These are just two of many such stories of mutual and effective collaboration across the lines of difference and power that characterizes CatComm’s work. Such stories demonstrate how the organization has mobilized resources such as the global cultural capital of highly ranked American colleges, the linguistic currency of the English language in an English-dominated media and business world, and the access to networks of influence that is tied up with that capital and currency.

When Williamson founded CatComm she was also writing her doctoral thesis, which documents and discusses the emergence of the organization (further academic work is currently underway to draw the links between CatComm’s organizational model and outcomes for favela communities). As she writes in that dissertation, the crucible of her thinking about supporting the many innovations in favela communities came when she realized the difference between the global networks that she, ‘a middle-class youth going into the favelas for essentially the first time’ had access to and those of the favela community members she was meeting. As such, CatComm’s early mission was to address ‘the historic inequality’ that the low-income communities living in favelas ‘face in accessing broader social networks’.

As the organization developed, so too did the access of favela communities to the cameras and microphones of the world’s media – those who disseminate the dominant stories we have about favelas. In August 2016 I found myself at Vila Autodromo, the favela evicted to make way for the Olympic Village, watching journalists from Australia, Canada, USA, Czech Republic, the Netherlands, UK, and France interviewing the residents of the last house to be bulldozed about the human cost of the Olympic Games, due to start in 24 hours. Consequently, these problems were raised on NPR, NBC, HBO, the BBC, and more, reaching tens of millions of people.

Some in the international community may have known that favelas and their residents bore the brunt of Brazil’s historic inequality, but we didn’t know what favela residents thought about this, or how they were solving these problems for themselves. But the urgent, instructive voices of favela residents are there, and they are organized. Human-built connections on modern platforms, of which there are many, amplify these voices. CatComm has built this connection through the strategic deployment of privilege. This has resulted in authentic, appropriate and effective relationships between favela communities and those who want to ally with them, to the benefit of all.

Sabtenga: modernisation knocks on the gates of tradition
Building a better media