The clout of the arms industry

The arms trade tends to have the government's ear. Why, wonders Dinyar Godrej, when it is so counter-productive?

It was an unlikely hurrah for democracy. But in February this year, British Prime Minister David Cameron, plump and rosy of cheek, set out on a four-day tour to promote democracy in the Middle East – with representatives of eight arms manufacturers bringing up the rear.

First stop was Egypt, where, with his shady companions in tow, he became the first world leader to congratulate the populace for chasing off President Hosni Mubarak. There arose a mighty chorus of condemnation at this blatant arms peddling, especially as at about the same time in Libya, Colonel Qadafi was being a real pain by using arms he had acquired from Western nations like Britain against his own democratically inclined people. The British government hastily revoked arms export licences to Libya. Ouch.

Cameron puffed up his cheeks and blustered about the good old-fashioned democratic values he was intent on nurturing – while also meeting Cairo’s military top brass. Of course, continued military domination of Egyptian politics would probably be the worst thing for democracy in that country. But there’s democracy and there’s democracy…

Continuing his tour of a region ruled mainly by despots, Cameron leant on the crutch of Britain’s ‘defence’ of Kuwait to justify why selling them arms was such a good idea. Wonder why he didn’t use the example of Saudi Arabia, ruled by one of the most authoritarian regimes in the world and the biggest buyer of British weapons, with contracts worth $480 million in 2010 alone?1 Only a few weeks later, armoured vehicles manufactured and sold by BAE Systems (Britain’s largest arms manufacturer) would roll from Saudi Arabia to give Bahrain a helping hand in a little local bother, quelling democracy protests. Did someone say Bahrain? Why, Britain had only the previous year approved export licences to Bahrain for tear gas and crowd control ammunition, assault rifles, shotguns, sniper rifles and submachine guns. Who would have imagined they would be used against people?2

The tail and the dog

One thing Cameron’s tour did illustrate was the oh-so-cosy relationship between arms manufacturers and politicians. ‘Defence’ is a favourite mantra of politicians – ‘arming to the teeth’ doesn’t have quite the same ring. Despite the fact that arms manufacturing in most Western nations ultimately represents vast fortunes of public funds flowing into private coffers for products that deal in injury or death, the industry is usually represented as a source of national pride. Military top brass and ministries of defence vie to feed it (and ultimately feed off it when they go through the revolving door on to industry careers). The corridors of power are infiltrated by lobbyists for the arms industry. So pervasive is its influence that when it comes to matters of spending on arms, the tail often wags the dog, with the requirements of the industry being put before effective strategy.

Nowhere is this more evident than in the US, which spends almost as much as the rest of the world combined on arms and is the world’s largest arms exporter to boot. Between 2001 (the start of the ‘war on terror’) and 2003, just the increase in military spending of this single country was larger than the entire military budgets of countries like China or Britain. Even before 9/11, the Clinton administration was going for ‘Full-spectrum Dominance’, in other words, nothing short of showing the world who was boss as a strategic goal. The wisdom of this in a post-Cold War world will probably be chewed over for years to come by analysts. It suited the arms corporations just fine.

The coffers of public funds were ripe for plunder. The US has a long tradition of Pentagon staffers with an eye on plum industry jobs, industry bigwigs who were previously in the Pentagon or military and can wield influence, the baited lures of political donations, and any number of political representatives willing to mount a soapbox over the issue of arms industry jobs. This led to an orgy of almost fraudulent commissions, where contracts were secured by quoting unrealistically low costs, only to be ‘gold plated’ by the armed forces demanding increasingly (over-)sophisticated technological requirements. As a result, contracts fell years behind schedule and overran costs to the tune of billions. Quite a few of the finished products turned out to be pretty useless (see the article 'Washington's white elephant - available in the print version of this issue). And then there are the ‘through-life’ costs of the latest destroyer, which can run up to three times the purchase price.

Former Secretary of Defense Robert Gates railed against ‘requirements creep’, citing the absurd example of the Lockheed Martin-produced presidential helicopter: ‘Once the analysis and requirements were done, we ended up with a helicopter that cost nearly half a billion dollars each and enabled the President to, among other things, cook dinner while in flight under nuclear attack.’3

Quite apart from a spurt in militarism (one would think we were gearing up for World War Three), it is this tendency towards industry-inspired bloat that is being transferred to the countries that ally themselves with the might of the US. A close military relationship with the US requires inter-operability of forces and buying the most expensive technology in the world just to keep up. One example of such a pal is Australia, where the government acknowledges in its 2009 Defence White Paper that the nation faces no serious military threat. Yet the defence budget has grown by 50.2 per cent over 2000-09, and will keep increasing by four to five per cent over the next 20 years. Such generosity does not extend to any other Australian public services. 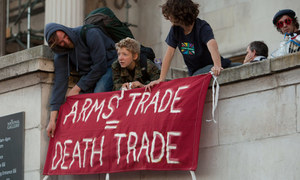 Demonstrators get straight to the point in September this year, when protesting against the Defence & Security Equipment International arms fair that drew 1,300 arms companies to London this year to hawk their wares to buying delegations from around the world.
sinister pictures/Demotix/Demotix/Press Association Images

US military dominance is a spur to inflated spending by major non-Western powers like Russia and China, and has formed a kind of template for other nations which have been spending big because they can. Chinese military spending has trebled since 2000, even though its interests seem to lie not in provoking a conflict, but in showing the world it is a serious player. For Russia, it’s a case of regaining lost pride and demonstrating the iron will of its hardline leadership. Countries with oil revenues flooding in have also been shopping hard despite some, like Ecuador and Kazakhstan, facing no likely threat.

Brazil is a curious case. It has not been at war since the 1870s and has a centre-left government which has implemented desirable social programmes. Economically, it is in an enviable position in a crisis-hit world and it demonstrates this by splashing out on arms. The only explanation, according to one analyst, is a desire to be seen as a ‘serious global power’.4 A template crafted by arms industry concerns has got stuck in place.

In 2010, India ousted China from the top spot in arms imports. There are naturally strained relations with Pakistan and China to take into account, and issues of obsolete aircraft. But there is also an age-old tendency to bolster national pride through military display, to say nothing of a long history of corruption in arms deals which has made a handful of members of the political élite filthy rich. The fruits of India’s economic boom could be much better invested – perhaps in improving the lot of its 60 million undernourished children under five, the largest number of any country in the world.

The arms trade is corrupt in more ways than one can describe – from the revolving door to kickbacks and bribes to industry-funded lobbies that operate through myriad channels. It is unethical in its irresponsible pushing of weaponry (abetted by the leaders of the wealthiest countries) on to nations where the arms may be used to quell legitimate popular unrest or where the money is so desperately needed for schools, wells or hospitals instead. The arms industry is capital, not labour, intensive – and greater numbers of jobs could be provided by diverting public funds to almost any other sector one cares to mention. And it is getting creepier all the time – from the PlayStation attitude to killing embodied by drones, to increasingly prevalent surveillance of ordinary citizens.

Will financial imperatives finally bring it in check? Much is being made of the proposed cuts in the US by the Obama administration, which have got the entire military-industrial lobby out in fury. Even Donald Rumsfeld has crawled out of the woodwork to gloomily predict that with cuts ‘we’re doomed to suffer another [terrorist] attack of some kind’. But a lot of the cuts will be to budgeted growth in spending rather than actual reductions. And in the past decade the US annual defence budget doubled – so how far will these cuts go?

Who will champion the divestment dividend in a world where buying an abundance of sabres to rattle will do nothing to solve the most urgent crises of climate change, resource sharing and poverty? As Óscar Arias Sánchez, former President of Costa Rica (the first country to abolish formally military forces), put it: ‘We have produced one firearm for every ten inhabitants of this planet, and yet we have not bothered to end hunger when such a feat is well within our reach.’