Thoughts and opinions from our readers. 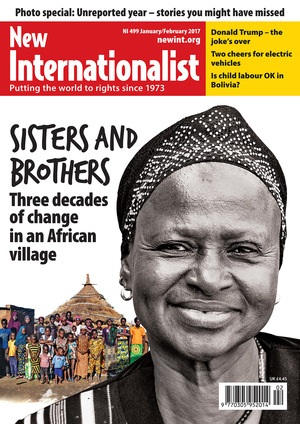 Please be assured that the vast majority of people in the US do not support this buffoon or the ultraconservative bozos who were ushered in from the 2016 election. We are appalled at this election and the actions that ‘the rump’ is taking. This narcissistic sociopath is unfit for any type of leadership. We do not support the isolationism, the ‘America First’ claptrap, the hate and bigotry, and the refusal to be fair and a grown up player in the world.

The US does a lot of stupid, selfish, greedy, illegal things in the world and often treats its own citizens in a similar manner, which millions here oppose.

We do so appreciate the world standing with us in opposition to this regime, in part because many outside the US understand far better than the US what it’s like to live under a dictator. Thank you for your support, your work to preserve scientific data, your communication, and opposition. We will need you in the coming months and, heaven forbid, years, until this regime is gone. I hope and believe it will be short lived as he’s clearly impeachable on many grounds and, unlike in the past, things take place on a world stage now.

The Agenda article about pacifists trying to avoid military conscription (NI 499) dealt with the matter too narrowly. The question should be not merely whether pacifists should be forced to join the military (or ‘alternative service arrangements’) but whether anybody should, in a modern world which is supposed to have rejected slavery and bonded labour.

John Pilger’s claims of a United States flexing its military muscle and rallying its regional allies to imminent confrontation with China is prescient in a post-Trump bullyboy era (NI 498). Australia, too, is wary of rising China. In its sprint towards modern prosperity, China is suspected of being rapacious and self-serving, inciting Australia’s expanded military spending.

As an established ally of the US, we share America’s fear of China’s rising military influence within the sphere of neighbours off our northern coast.

This tension escalated to anxiety-provoking levels, with China trying to establish a foothold in the disputed Spratly Islands. The Chinese navy has also made its presence felt in contested marine territories of the South China Sea.

The recently released ‘Asia-Pacific Rebalance 2025, Capability, Presence and Partnerships’ in the US assumes a welcome counterweight to China’s bristling muscle in southeast Asia and the rest of the Far East. As Australia is likely to adopt the report’s recommendations regarding the Northern Territory housing armed forces from the US, China will surely perceive our preferred alignment with the US as playing right-hand man to America’s tough-minded limitation of China’s geopolitical aspirations.

As a Chinese-Australian, I would say that the unseen elephant in the room is that Australia is more culturally aligned with the US and Europe than it will ever be with China, a fixed variable that will not change any time soon.

John Pilger’s article (NI 498) and documentary on ‘The coming war on China’ will be denounced by the ‘usual suspects’ in the media. Clearly, after the collapse of the Soviet Union, those who make up the Military Industrial Complex in the US had to focus their future financial returns on creating new enemies. China was the obvious choice. While the new regime in Washington will not want to add to its poor away-games record since World War Two (Grenada being the exception) and US citizens are not exactly in the mood for further misadventures, that does not prevent mischievous warmongers from exploiting opportunities from the war industry.

Josh Eisen and Richard Swift’s article on tax and how to avoid it (NI 498) will ring a loud bell with many Australians. Our present PM, Malcolm Turnbull, is described as a successful businessman, as no doubt he is, having used accounts in the Cayman Islands. He claims to have paid all the taxes he had to, and no doubt he has. Whether he has paid all the taxes he should (morally) have paid is another matter.

Tatiana Garavito asserts, ‘instead of simply blaming those who have taken up armed struggle, we will need to try to understand them’ and ‘recognize those on all sides of a conflict as human beings’ (‘Peace in Colombia?’, NI 497). This philosophy seems to have been successfully applied in bringing peace to Northern Ireland and ending apartheid in South Africa. Getting rid of ‘the enemy’ in Somalia, Iraq and Libya seems to have brought disastrous consequences. However, the argument that appeasement is ineffective and a recipe for disaster has been screamed at us ever since Neville Chamberlain returned from negotiations with Adolf Hitler in 1938, proclaiming ‘peace for our time’. More recently, the whisper that there should be negotiations with ISIS earned derision and contempt.

Any lifestyle choice that binds us ever tighter into the web of drugs put out by the pharmaceutical industry will surely be encouraged by the latter since it will boost their profits.

The article on PrEP (NI 497) surprised me with its supportive tone, because it seems analogous to supporting, say, a pill which could allow us to continue eating junk food, drinking heavily, or smoking while avoiding the consequences.

I make no moral judgements, but anything which encourages us to continue our dodgy consumerist ways and ignore the consequences must ultimately be catastrophic.

Obama's legacy falls short on organizing
Water fights in a time of scarcity: the Bolivian Carnaval
Back