Praise, blame and all points in between? Your feedback published in the April 2017 magazine. 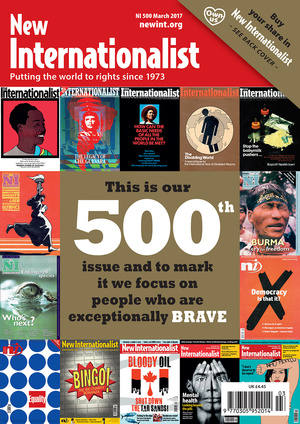 I have been reading NI for many years and have enjoyed it immensely, but I would say the Jan/Feb edition (NI 499) was one of the best.

As a volunteer surveyor in Western Samoa many years ago, I greatly appreciated Chris Brazier’s articles about the three decades of change in an African village. I particularly understood the dilemma about giving – and how much. A small amount by our standards can be a fortune for them – but where does one stop? The Australian government has cut back its aid to Africa yet the need is very real. Africa is not ‘front of mind’ here in Oz.

I also appreciated the map which helped me find the village on the web – excellent. It helps to give one a sense of connection to an otherwise distant place.

I was surprised to see armed activists referred to as ‘militants’ (The Unreported Year, NI 499). I know little about this group but it appears they are a small, armed group resisting the Erdoğan government.

Your choice of words puts you neatly within the mainstream media, implying they are unreasonable in this, in opposition to a (by implication, benevolent) government. The reality is very different. It would be hard for any oppositional group in Turkey to be as violent and oppressive as the government, whose claim to legitimacy – and suppression of opposition, whether or not armed, democratic, or minority – is based on its own military superiority.

Words like militant are part of the ‘grey news’ approach used by the mainstream to distort, confuse and misinform – so successfully that a near-majority of British think the Palestinians are trying to invade what are actually illegal Israeli settlements; and that so many have doubts about what is actually solid science around climate change. There is no such slanted term used for Erdog˘an’s violent supporters – his army.

Your Country Profile of Nicaragua gives a very unfair picture of the country I live in. It lambasts the president, Daniel Ortega, as an ‘obstacle to progress’ when he has led massive reductions in poverty levels, has achieved near-universal schooling (when under his predecessor huge numbers of children didn’t go to school) and radically expanded the health service. It is horrendous to liken him to the dictator Anastasio Somosa, who tortured and assassinated his opponents. Only later on do you acknowledge some of the government’s achievements. If it was as bad as you describe, would Nicaragua have surpassed Panama to become officially Central America’s safest country?

John Pilger (NI 498) did not mention China’s aggressive stance toward its South China Sea neighbours like the Philippines, Vietnam and Taiwan.

Pilger seems not familiar with the geographical location of the Spratly Islands. They are right off the coastlines of Brunei, Malaysia, the Philippines and Vietnam. Fishers from those countries have fished around the Spratly Islands for centuries. The southernmost territory of China, Hei-nan Island, is a couple of hundred kilometres away from the Spratly Islands. The article also did not mention that China put 3,000 missiles pointing toward Taiwan, which is a democratic country. For me, as a Taiwanese American, Pilger’s story is just one-sided blaming of the US government.

Thank you – you say the kindest things!

In our 500th edition we called upon our readers to help secure our future and become co-owners of New Internationalist by investing in our Community Share Offer (factsandheart.org).

We are humbled by your response and what you had to say about us.

New Internationalist, for me, provides a reliable and trustworthy source of news and analysis from parts of the world often ignored by the mainstream media, but which we ignore at our peril. In-depth analysis makes it easier to understand complex issues, and the varied and colourful format makes the paper magazine far more of a pleasure to read than anything I’ve seen on a screen. In this troubling era of ‘fake news’, and stories reflecting the goals of big business and finance, we need an independent and unbiased source of news about our world, its diverse people, and fragile environment, more than ever.

Why do I want to support NI? Because it is a sane, measured voice in a mass of media narrow-mindedness and untruths. Because it reminds me that the world is larger than what we see on the TV news and read in most papers. Because if no-one helps us to hear the voices of the ignored and under-represented then the Western world is in danger of sinking into its own self-made hole of ignorance, indifference and injustice.

NI is a national treasure and is needed even more in a world of capital-driven globalization and the racist backlash of white nationalism.

I am investing because I value NI’s journalism and independence, particularly now in the ‘alternative facts’ world.

Thrilled to be helping journalism remain free, honest and unfettered by demands of advertisers. I have subscribed for over 15 years, and have been blown away by the quality of all of the articles, the depth of reporting and the incredible range of topics. The whole world needs the New Internationalist.

The laws won’t work.
Standstill - Letter from Cochabamba
Back