When the lake ran dry 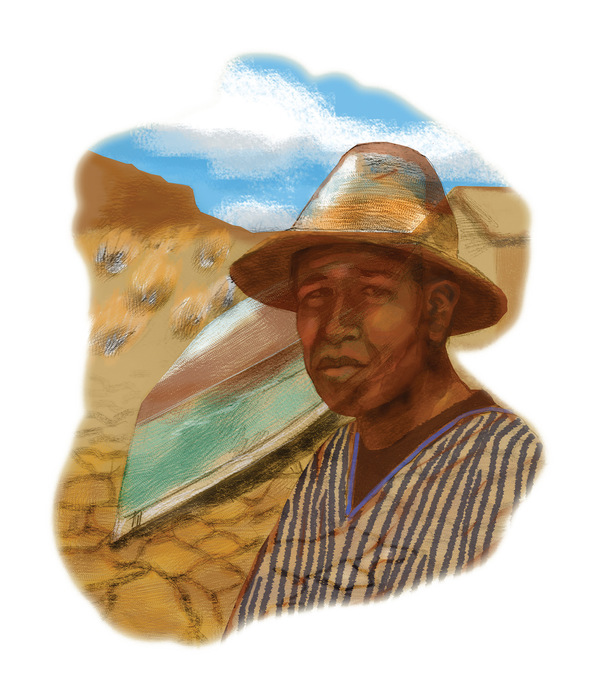 ‘My ancestors used to live in boats like this,’ the old man tells me mournfully. He is showing me a miniature boat, similar in shape to a Viking galley but made entirely of reeds. This is an example of traditional Uru handicrafts, created using reeds that grew in a lake that is no longer there.

We’re in the tiny Uru community of Puñaka, which is just a cluster of adobe houses with a few modern homes among them put there by a state aid project. The man can remember when Puñaka was on the shores of a vast lake teeming with life, the second largest in Bolivia. Dotted around the village are small metal fishing boats – but there is no water as far as the eye can see, and the boats are rusting away. This area was formerly the shores of Lake Poopó, in the department of Oruro. The lake itself has almost entirely dried up as a result of drought and climate change.

Abdon, my contact in Puñaka, is an affable young man in a tracksuit when we meet in the nearby town of Poopó. He apologizes for not wearing his poncho. When we arrive in Puñaka, he disappears behind the low wall surrounding his family’s home and emerges in a traditional black and white poncho and reed hat. The transformation seems to encapsulate the relationship between urban and traditional lifestyles in Bolivia, where a multitude of rich indigenous cultures exist side by side with cosmopolitan city living.

This coexistence is drawn into sharp relief in Puñaka. The community has been hit particularly hard by Bolivia’s drought and the lake drying out because the Uru people traditionally live in harmony with the lake: fishing, hunting water birds, and making items from reeds. It is not in their culture to raise livestock or work in construction, but with the lake gone, many Urus have had to seek whatever work they can find. ‘We don’t have anywhere to harvest, to sow; we have nothing. That’s why people leave,’ Abdon says.

Bernardo, one of the community leaders, tells me that of 20 families in Puñaka, only seven are living there permanently. Many Bolivians in such isolated places swing between their home community and a base in a larger town depending on work, family and other demands. I wonder how it would feel to live between such contrasting environments: while there are remote communities in Bolivia many hours’ hike from the nearest road, built-up city areas have sky-scrapers and fast-food chains, like urban centres all over the world.

Here in Puñaka, it is difficult to imagine a cash economy: there is no public transport covering the half-hour drive from the main road, and the way is not paved. At one point, we pass a tilled patch of land where someone has planted potatoes, but they barely grew beyond sprouts before withering – whether a result of the drought, contaminated water from mining, or poor soil conditions in this harsh region, it’s hard to say.

Abdon is keen to preserve Uru culture by attracting tourists to Puñaka. Santiago, the mayor, would like to see a brick or ceramics factory set up with state support, taking advantage of the high-quality silt of the lake bed. He also suggests artificial lakes for fish farming, but so far this is little more than an idea.

There is an otherworldly beauty to this part of the Bolivian altiplano, possibly because the already bleak landscape has been blemished by pollution and other environmental impacts from the nearby mining industry; little pools of discoloured water and churned-up heaps of dirt are dotted across the landscape as one approaches Oruro. It is flat as far as the eye can see. Flamingos hop from pool to pool, looking for food.

It is easy to understand why the people I meet in Puñaka are concerned about losing their way of life. The process of keeping indigenous cultures intact alongside city living will be complex as Bolivia develops and changes, in Puñaka and beyond. But Abdon exudes passion for his culture that gives me hope. He says he saw a parihuana bird fly into the mountains and disappear, which is a sign that the water will return to the lake. I hope he is right.