Praise, blame and all points in between? Your feedback published in the July 2017 magazine. 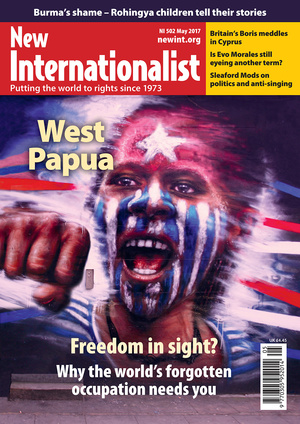 Just to say thank you for the West Papua edition (NI 502). I remember the issue on East Timor (NI 253), way back. Edited by John Pilger, it was a quick, as well as deep, fix on the bloody and illegal occupation of what is now Timor-Leste by the Indonesian military, recognized by Australia as legal. Until liberation.

There is something you should know about Australia. Unless there is a difference in policy between the two major parties, Liberal and Labor, there will be next to no coverage by the ABC, and none by the commercial channels. East Timor used to get next to no coverage because both parties supported the illegal occupation. There is minimal coverage of Indigenous imprisonment here. No coverage either of Australia’s coal exports (we are the largest exporter of coal). There is now no coverage of West Papua for the same reason. And, by the way, there is next to no coverage of the people we hold hostage on Manus Island and Nauru, refugees in a living hell, where they have been for more than three years; so you are breaking a media blackout here.

Your West Papua exposé (NI 502) was most appreciated, and timely given the growing world awareness, sparked to a large extent by the efforts of Benny Wenda, of the 54-year Indonesian genocide against the indigenous Melanesian West Papuan rightful owners of the land.

It would have been doubly appreciated if your map had included the Raj Ampat islands (a growing, once pristine, tourist destination) to the west of the Birds Head Peninsula.

From 1955 to 1960 I was a boy expatriate in Madang, New Guinea, not far from West Papua. When Indonesia invaded I was very sorry for the West Papuan people, and angry with the UN, the US and Australia, because they had abandoned and sold out them out.

If we can now right this huge wrong I’ll be very happy, but if there’s another vote it must be a genuine one, not another bogus one like before; and transmigrants and their families must not be allowed to vote.

I was excited to see a feature article on Cyprus (NI 502), my island. However, it did not take long to feel a deep sense of disappointment. Once again we read of Greek Cypriots talking on behalf of Turkish Cypriots as the only legitimate representatives of the island. There has been meddling by the great powers, both US and British, no question about that. However, as ever, no-one is innocent. There is no indication of whether Greek Cypriots take any responsibility for the bloody conflict, which resulted in the division of the island where people, both Turkish and Greek Cypriots, have become refugees in their own country. There is also no mention of the Annan Plan (hri.org/docs/annan/), which envisaged uniting the island. In 2004, it was put to a referendum. It was the Greek Cypriots who said ‘No’. Turkish Cypriots accepted the Plan.

I hope we can read a balanced account of the Cyprus problem and the struggles and predicament of Turkish Cypriots stuck between a corrupt regime in Turkey which hates them for their modernity, education and liberal views on Islam (among other things); and a Greek Cypriot regime which is yet to free itself from its racist past and the clutches of the Greek Orthodox Church, which still sees Turkish Cypriots as the remnants of hated Ottomans.

The cult of insecurity
Open Window - Dragon's breath
Back