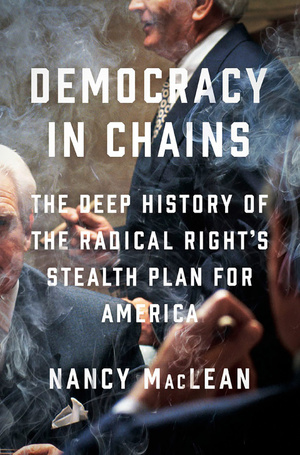 The Deep History of the Radical Right’s Stealth Plan for America
by Nancy MacLean (Scribe, ISBN 9781911344681)

In 2013, history professor Nancy MacLean made a serendipitous discovery while conducting research on the campus of George Mason University, Virginia. In a pile of correspondence in the office of recently deceased academic James Buchanan she found confidential letters from the 1990s, detailing massive funding of Buchanan’s Center for Study of Public Choice by the billionaire and Tea Party backer Charles Koch. Realizing that here was evidence of the long-running libertarian campaign to reshape American politics to their advantage, she dug further.

What MacLean discovered – as described in her highly readable account – is a lavishly funded plot to replace representative government with the principle of ‘public choice’. Behind this benign-sounding phrase lies a deeply pernicious theory, expounded by Buchanan, which argues that no society is free unless every citizen has the right to veto public policy and that no-one should be taxed to improve the lot of another. In practice, such a philosophy leads to a destruction of civil society and an entrenchment of corporate power. Notoriously and disastrously, Buchanan, together with Milton Friedman, oversaw the implementation of this system in Chile in the 1980s under the dictatorship of Pinochet.

To ‘manacle the hands of democracy’ in the US has long been the goal of the cabal of vote-suppressors and union-busters behind the Tea Party movement. Given that they now have a true believer as vice-president, in the person of Mike Pence, as well as supporters in the House, Senate, Courts and state governments, Nancy MacLean has done us a true and timely service by shining a light on their murky activities and despicable machinations. 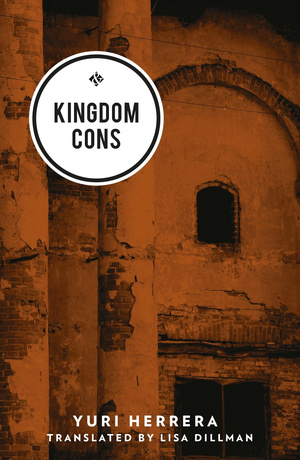 Yuri Herrera’s Kingdom Cons is a straightforwardly allegorical tale about the relationship between art and power. Its protagonist, a talented songsmith known to us only as ‘the Artist’, ingratiates himself to a political strongman (‘the King’) with obsequious folk ditties, but finds his loyalties tested by the machinations of a rival mob intent on wresting power. His dilemma is neatly summarized in an exchange with a writer (‘the Journalist’), who observes: ‘Seems to me like you’re pure passion, and if one day you have to choose between your passion and your obligation, Artist, then you are truly fucked.’

First published in Spanish in 2008, this English edition of Herrera’s slim novella is notable for Lisa Dillman’s translation, in which narrator and characters alike speak in a contemporary street vernacular redolent of gangster rap. Killing is ‘smoking’, people are ‘dogs’, feeling good is ‘feeling fly’, and women are ‘stuck-up honeys’ or ‘badass’. It may well grate on some readers, but it’s apposite insofar as it speaks to something of the gangsterism inherent in high politics. We might kid ourselves that such posturing is specific to a certain type of Latin American caudillismo, but it’s more or less universal: from the strutting of Trump and Putin to Emmanuel Macron laying down the law with an excessively firm handshake, politics remains – as it ever was – a performance of power play and machismo.

Christine Newby from Hull in the North of England wasn’t always Cosey Fanni Tutti. It was a chance meeting with one Neil Megson in the early 1970s, a student who had already changed his name to Genesis P-Orridge, that got the ball rolling.

Tutti came to a feminist critique of the sex industry later. I expected these to be the hardest bits of the book to read, but they weren’t. The most brutal aspects concerned people close to home: a father who banishes his daughter; the abusive relationship with P-Orridge. The history of COUM and Throbbing Gristle has up to now been dominated by its mythomanic spokesperson, P-Orridge. Art Sex Music is Tutti’s chance to right wrongs (write rights, perhaps) and she does this beautifully, intimately and without vindictiveness. 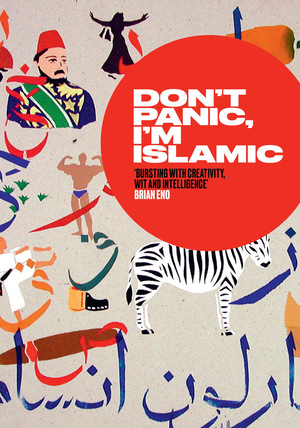 Confronted with a US president determined to stir up anti-Muslim, anti-foreigner and anti-‘Other’ sentiment, who spouts nationalist rhetoric and passes decrees such as the travel ban against the citizens of seven mainly Muslim countries, what can you, as a law-abiding comedian, writer or artist, do?

Well, one response – or, in fact, 34 responses – can be found in this wonderful, subversive anthology, which both questions ignorant Trump-like assumptions and provides insight into the impact that the post-9/11 ‘war on terror’ has had on Muslim and Arab people around the world. From the perils of applying for a visa (‘Do you feel yourself to be more Libyan, or more homosexual, Sir?’) and filling in official forms to the crisis of self-identity triggered by the requirement to belong either to ‘us’ or ‘them’, the contributors use wit, reflection and anger to reveal the hurt, fear and sense of threat that is now commonplace in their lives.

Don’t Panic, I’m Islamic is a fun, easy read that will make you laugh out loud in places. But it also contains a serious message: it is not the existence of the ‘other’ that is problematic (indeed, as Alberto Manguel explains in his contribution, ‘the other makes existence possible’) but rather ‘the labelling of the “separate” others as inimical’.

Words are powerful, as Twitter-happy Trump knows only too well. This collection is a welcome antidote to the mainstream stereotyping of millions of people. Read it – and then pass it on.

Mixed Media: Music
Also out there...
Back