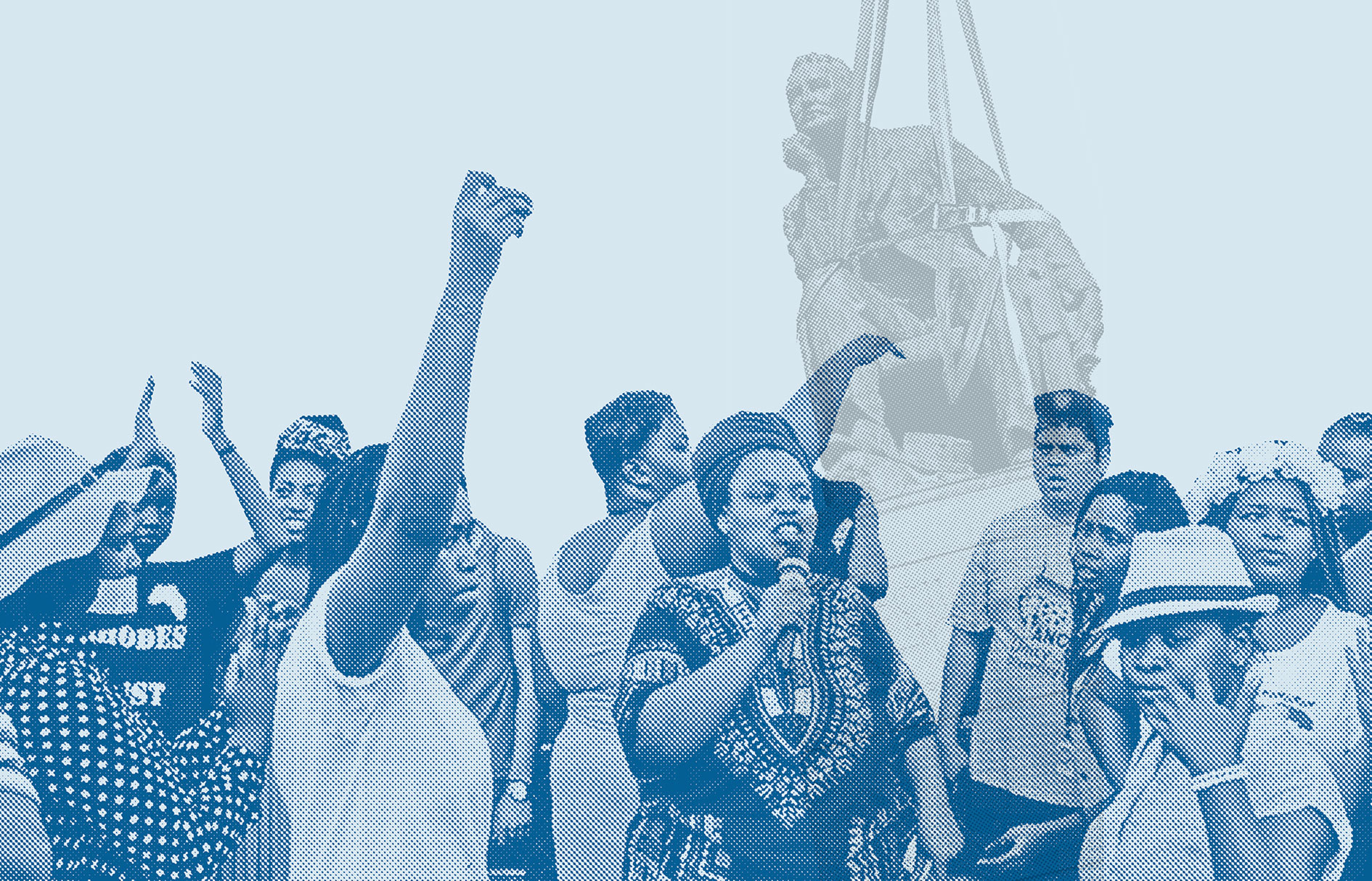 Protestors celebrate the removal of a statue of Cecil Rhodes from the University of Cape Town, April 2015.
Photo: Desmond Bowles under a CC licence

In October 2015, university and college campuses across South Africa erupted in protest over a proposed 10-per-cent increase in tuition fees. Dubbed the ‘FeesMustFall’ movement, the protests have become something of an annual occurrence. Each year brings the prospect of fee increases and the campaign picks up again – at the time of writing many institutions remain closed due to protest activity.

Many herald these demonstrations as the dawn of a new generation of youth activists, comparable to those who struggled against apartheid. The difference is that this time the discontent is not with the legal racial order but with the ruling African National Congress (ANC) and its perceived acquiescence to economic and racial inequality. Some go further, describing the flurry of action as a ‘decolonial movement’, after students at the University of Cape Town (UCT) successfully called for the removal of a statue of the ultimate imperialist – and arch-white-supremacist – Cecil Rhodes.

But while the protests certainly highlight a profound frustration among young people, they have not fundamentally challenged the inequality that defines South African society. What they do reveal is how the education system serves to entrench division and has become a space of political struggle.

Under apartheid, education in South Africa was racially stratified. ‘Bantu’ education policy at the primary and secondary level was meant to prepare black South Africans for low-wage work and servitude. In higher education, non-white institutions trained a limited number of public-sector workers, like nurses and teachers; whites-only universities, on the other hand, produced highly skilled graduates who would move on to well-paid work.

While this system reproduced racial divisions, it also had some unintended effects. The 1976 Soweto protests by high-school students occurred after the rapid expansion of education for black children, while the South African Student Organization, led by visionary anti-apartheid activist Steve Biko, was a key organization in challenging the regime.

Since the end of apartheid in the early 1990s, South Africa has seen an expansion of free basic education at the primary and secondary levels, although inequalities persist. Formerly white-dominated private schools became deracialized but were allowed to increase their fees. In so doing, they preserved their privileged position vis-à-vis whites and created a de facto two-tier education system.

‘We were sold the dream of a “rainbow nation” where everyone is happy: we must go to white kids and white kids will come to us and we must act like nothing happened’

Likewise, reforms to the university system failed to address massive disparities between well-resourced, historically white universities and largely black universities, with the latter suffering from limited budgets due to lack of research funding or private-sector support.

As with many eras of student revolt across the world, the FeesMustFall movement was preceded by a massive increase in people entering, and wanting to enter, higher education for the first time. The deracialization of universities has led to increased demand, with the enrolment of black students increasing from 59 per cent in 2000 to 71 per cent in 2015. The death of Gloria Sekwena who, in 2012, was trampled while waiting in line with her son to register at the University of Johannesburg, is a tragic testimony to the scale of this demand.

Like the student protests that shook the United Kingdom in 2010 or Quebec in 2012, debt is a key point of contention. Siya is a second-year engineering student at UCT. He lives in Khayelitsha, a township on the edge of Cape Town, and is the first from his family to attend university. Siya’s fees are among the highest in the country and he is financing his education through student loans.

‘With the debt we have to ask ourselves, what about our parents?’ he tells me. ‘They are having hope on us that we will help them when we work.’

For thousands of students from poor households, attaining a degree is not an individual pursuit, but one that carries with it the aspirations of entire families and communities. It is seen as a panacea to a range of problems affecting marginalized communities that are themselves outcomes of South Africa’s racial capitalism. Such expectations place an enormous burden on these students, one not shared by wealthier white students.

It is little surprise that Siya describes FeesMustFall as a movement that ‘motivates’ him. ‘But debt is killing us,’ he adds. ‘They say you will enjoy [university], but these debts are increasing each year.’

Although material concerns are a priority, the protesters are also aware of the way they are realigning traditional political affinities. Sechaba is a student activist with the Economic Freedom Fighters (EFF), a party that emerged from an ANC split and taps into youthful frustration at the slow pace of change.

‘As youth of South Africa, we were cheated or betrayed by the previous leaders of the ANC,’ he says. ‘We were sold a dream of a “rainbow nation” where everyone will be happy: we must go to white kids and white kids will come to us [and] we must act like nothing happened.’

The idea of the rainbow nation captured the spirit of reconciliation that pervaded after the 1994 democratic elections. Yet it does not square with the lived reality of many young black South Africans, who lack adequate schooling, housing and employment. This has given rise to a widespread scepticism of the 1994 negotiated transition and encouraged the notion that the ANC ‘sold out’ by choosing political over economic reform.

More radical than our parents

Sechaba says youth are no longer bound by an allegiance to the ANC. ‘We are more radical,’ he says. ‘[Young people] don’t have the kind of patience that our fathers and mothers have’. For him, this idea is borne out by the rising popularity of groups like the EFF who make the radical-left demands that the ANC stopped making a generation ago, calling for the expropriation of land and nationalization of mines.

The only option for young people is to make their voice heard through disruption, Sechaba claims, adding: ‘In order for us to make change, we have to make sure we create disorder – to make things ungovernable.’

The tactic of creating disorder links FeesMustFall to another set of less-reported protests, driven not by students but by communities. Described as ‘service delivery protests’, they have been happening for a decade and involve neighbourhood groups disrupting traffic and public services to pressure the state to improve access to clean water, sanitation, housing and employment. These actions show that even with equal citizenship, the poor continue to have limited access to the official channels that effect change.

FeesMustFall does not yet signal a turning of the political tides in South Africa. But it does capture a deep frustration at the pace of socio-economic change, specifically among young people. It has also led to a revival of interest among young South Africans in black revolutionary thinkers, such as Steve Biko and Frantz Fanon, who may offer clues as to how the past can help them navigate the future.

As Fanon, an anti-colonial theorist, wrote in his seminal text The Wretched of the Earth, ‘Each generation must, out of relative obscurity, discover its mission, fulfil or betray it.’ Moving from episodic protest to bringing about fundamental change will take a more sustained and multi-layered struggle, not just against higher education fees, but the structures that maintain and reproduce inequality in all its forms.

Chris Webb is a PhD candidate at the University of Toronto. He is a Research Associate at the International Labour Research and Information Group in Cape Town.

Kids at work
Seize the memes of production