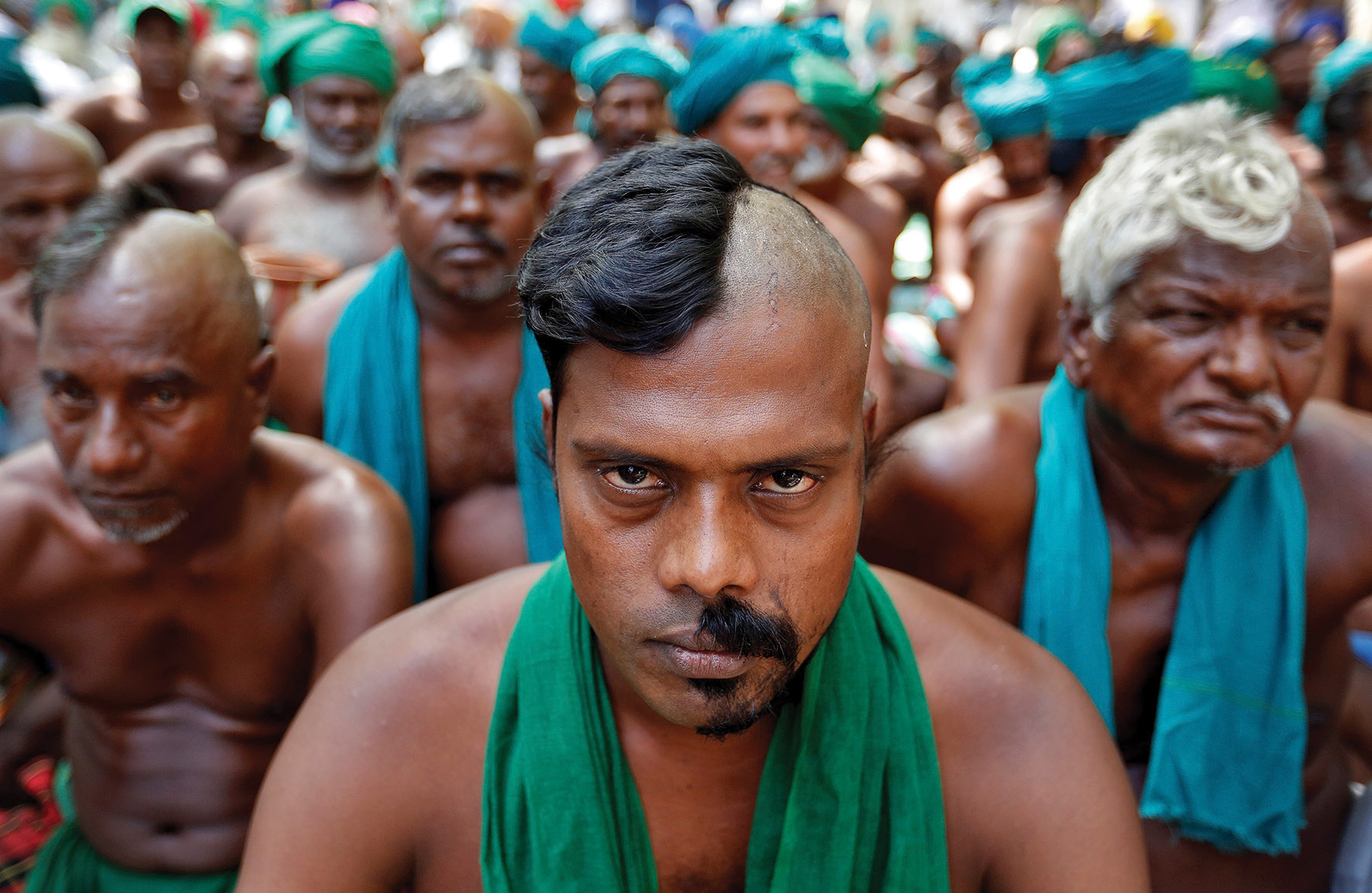 INDIA Farmers from the southern state of Tamil Nadu pose half-shaved during a protest to demand a better drought-relief package from the federal government in New Delhi, India. Having recently experienced one of the worst droughts in over 140 years, 150 Tamil Nadu farmers took to the streets in March armed with props, skulls, mice and snakes – performing one desperate act after another for an entire month. In mid April, Prime Minister Narendra Modi, and his Bharatiya Janata Party, announced the provision of debt-relief to 21.5 million farmers, despite criticism from some economists. 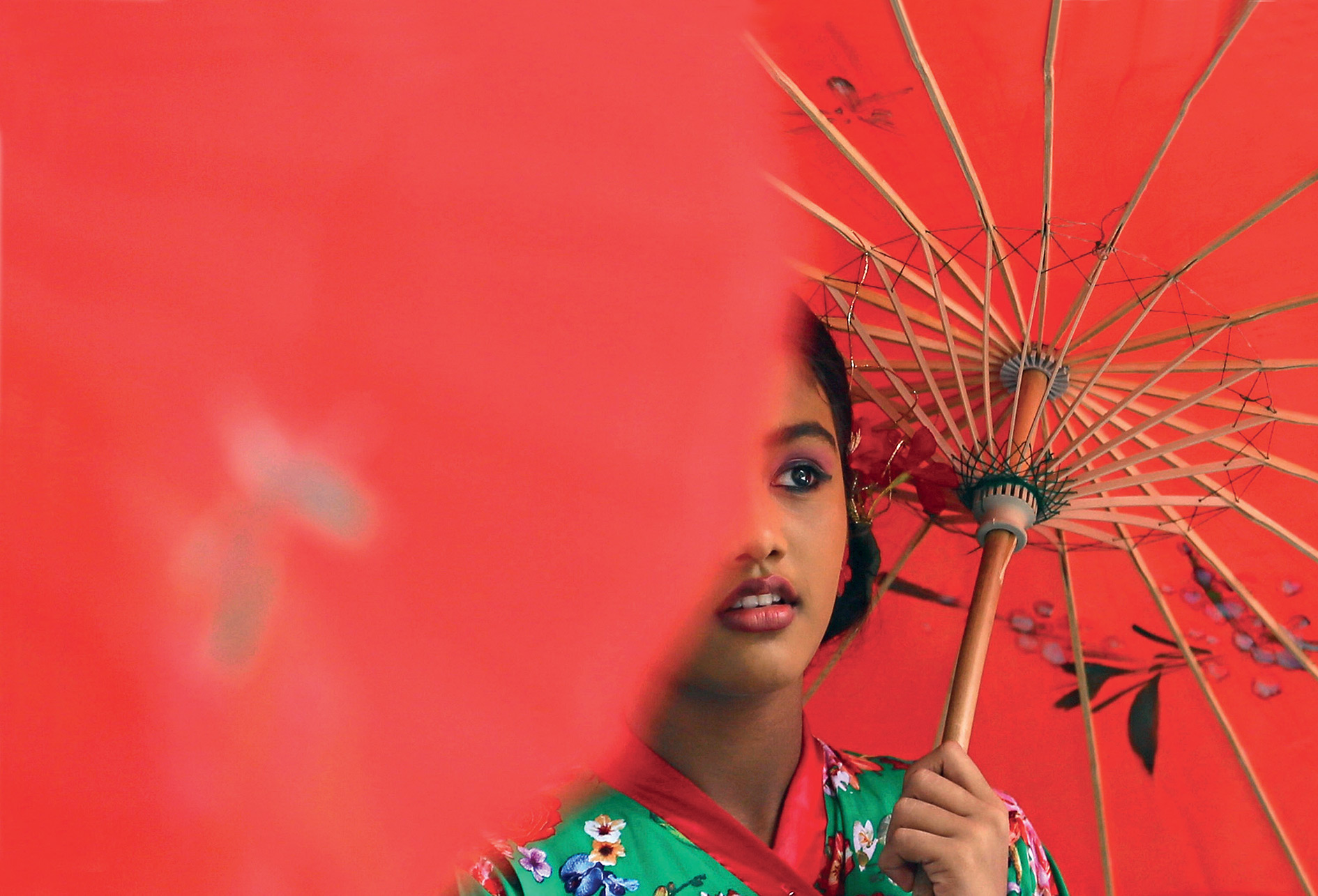 SRI LANKA A schoolgirl performs during an event to mark World Children’s Day on 1 October in Colombo, Sri Lanka. On the same day, UNICEF released three short films featuring real-life ‘shocking experiences all too common in Sri Lanka’ to call on citizens to protect children and young people from all forms of violence. In 2016, there were over 9,000 reports of violent acts against children, the vast majority perpetrated by persons known to the victims. Sri Lanka has joined 12 ‘pathfinding countries’ committed to ending all forms of violence against children by 2030. 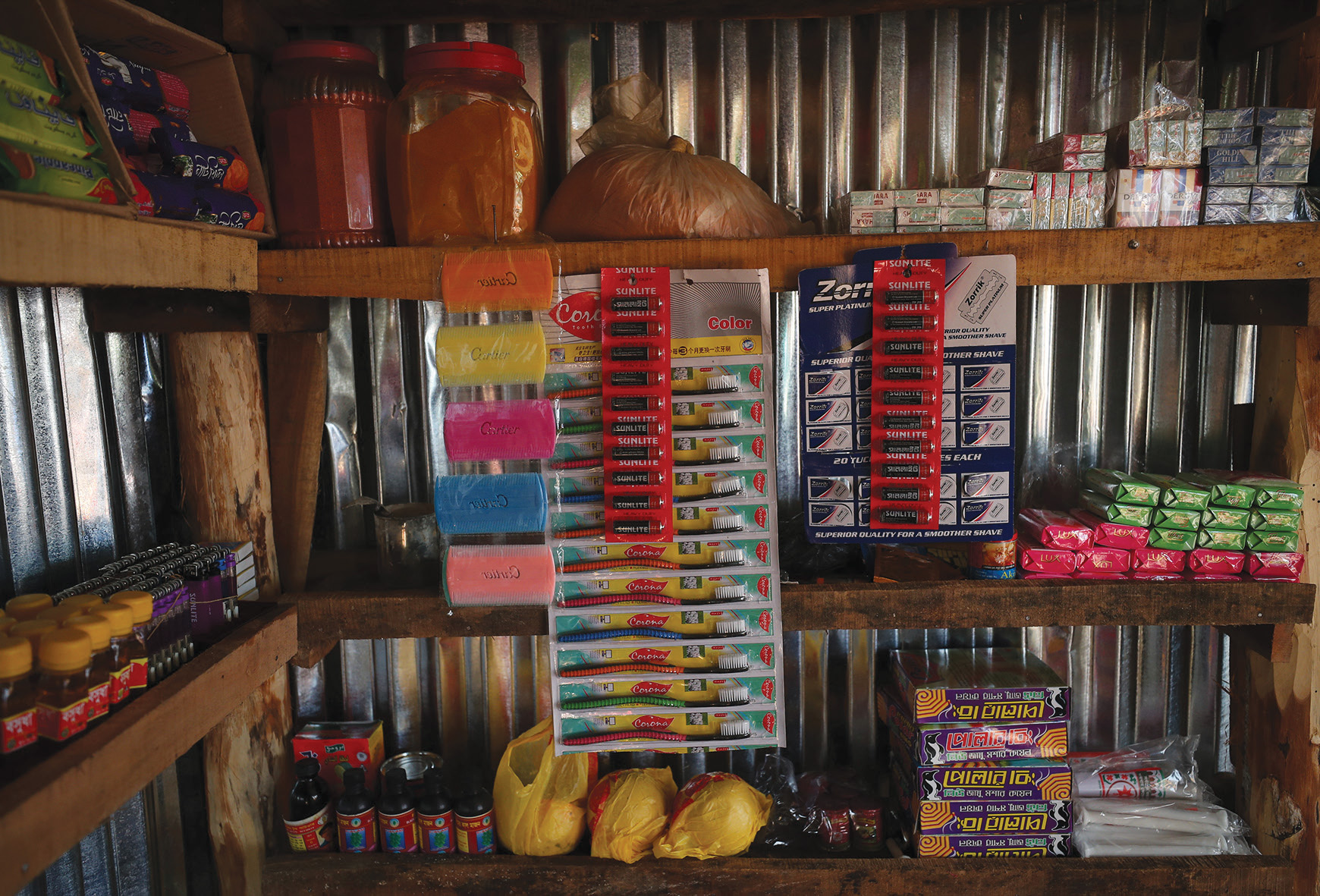 BANGLADESH Healthcare products for sale in a shop in Palong Khali refugee camp near Cox’s Bazar, Bangladesh. Between August and December more than 600,000 Rohingya Muslims fled their native Myanmar for neighbouring Bangladesh, after thousands were murdered, raped and had their villages torched by Burmese government troops and ethnic Rakhine Buddhist vigilantes. Although they have lived in the region for centuries, the Muslim Rohingya people are denied citizenship rights by the government of Buddhist-majority Myanmar. As refugees in the camps in Bangladesh, they end up working for Bangladeshi traders who pay them little. 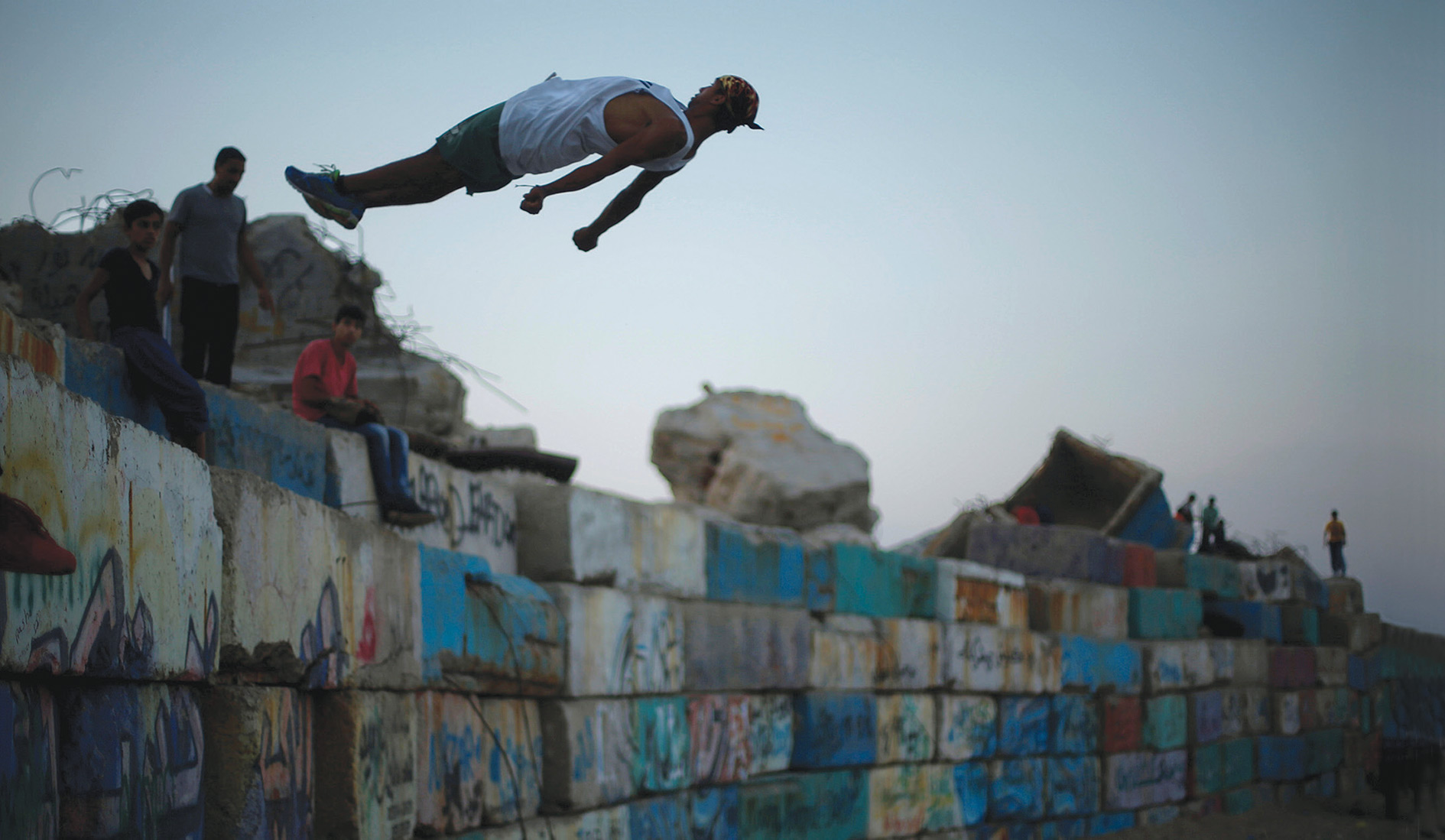 PALESTINE An escape of sorts: a Palestinian youth demonstrates his parkour or free-running skills at the seaport of Gaza City. According to a member of the parkour team, young people come to look at the sea to take their minds off the ‘difficult situation’ in the occupied territory. ‘They want to go out, they want to see the world.’ For now that is a pipedream. youth unemployment is over 40 per cent and until some kind of resolution can be found to the Israel-Palestine conflict, Gaza youth will remain trapped and frustrated. 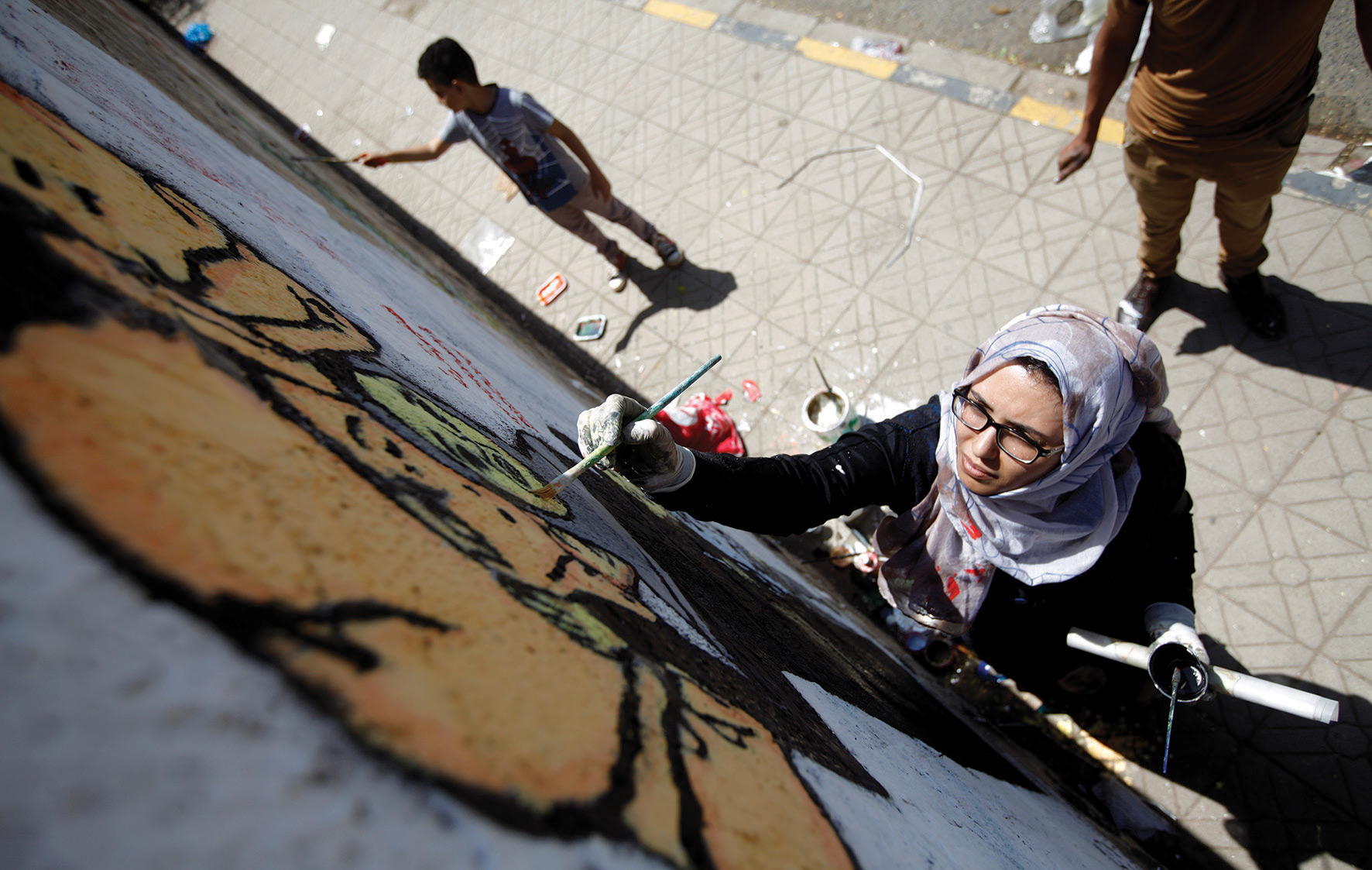 YEMEN Street artist and activist Haifa Subay is photographed in action as she paints a mural depicting the suffering of the women and children during war. The ‘Silent Victims’ campaign champions artists, mostly women, to use street art to express how they have been affected by war. A famine survey released in mid-November revealed that thousands of Yemenis could die daily if a Saudi-led military coalition does not lift its blockade of the country’s key ports. Some 2.5 million people in Yemen’s crowded cities have no access to clean water, increasing the risk of cholera. 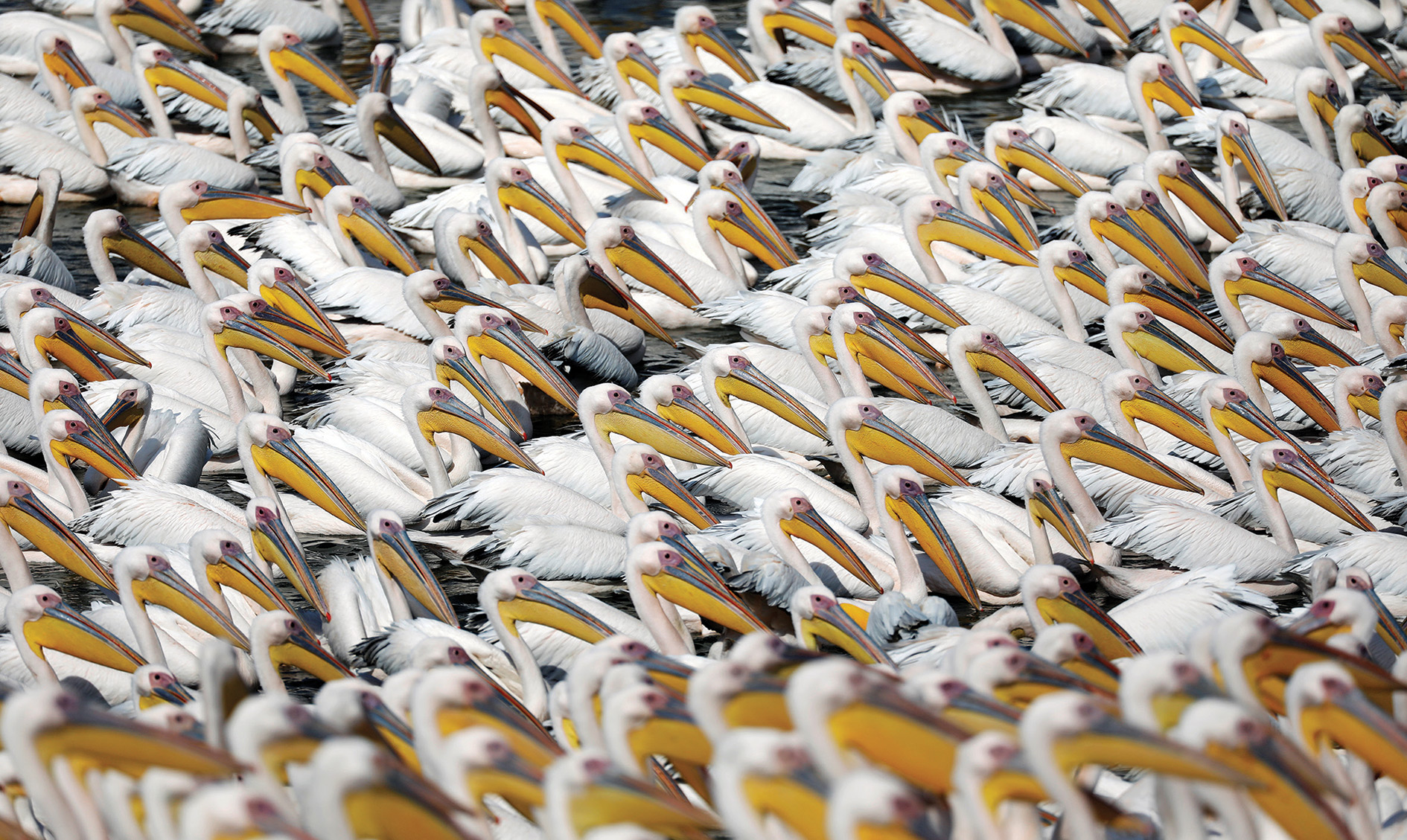 ISRAEL Free to feed: thousands of migrating Great White Pelicans can once again make a pit-stop in Israel. In October, the Agriculture Ministry bent to pressure from farmers and environmentalists to continue its funding of a project to feed pelicans who fly over the country. Centralizing the feeding ground at a reservoir has decreased the risk that the birds will harm the livelihoods of farmers by taking fish from nearby breeding grounds. Israel’s nature reserves authority welcomed the decision, saying it hoped funding would continue for the sake of both farmers and pelicans. 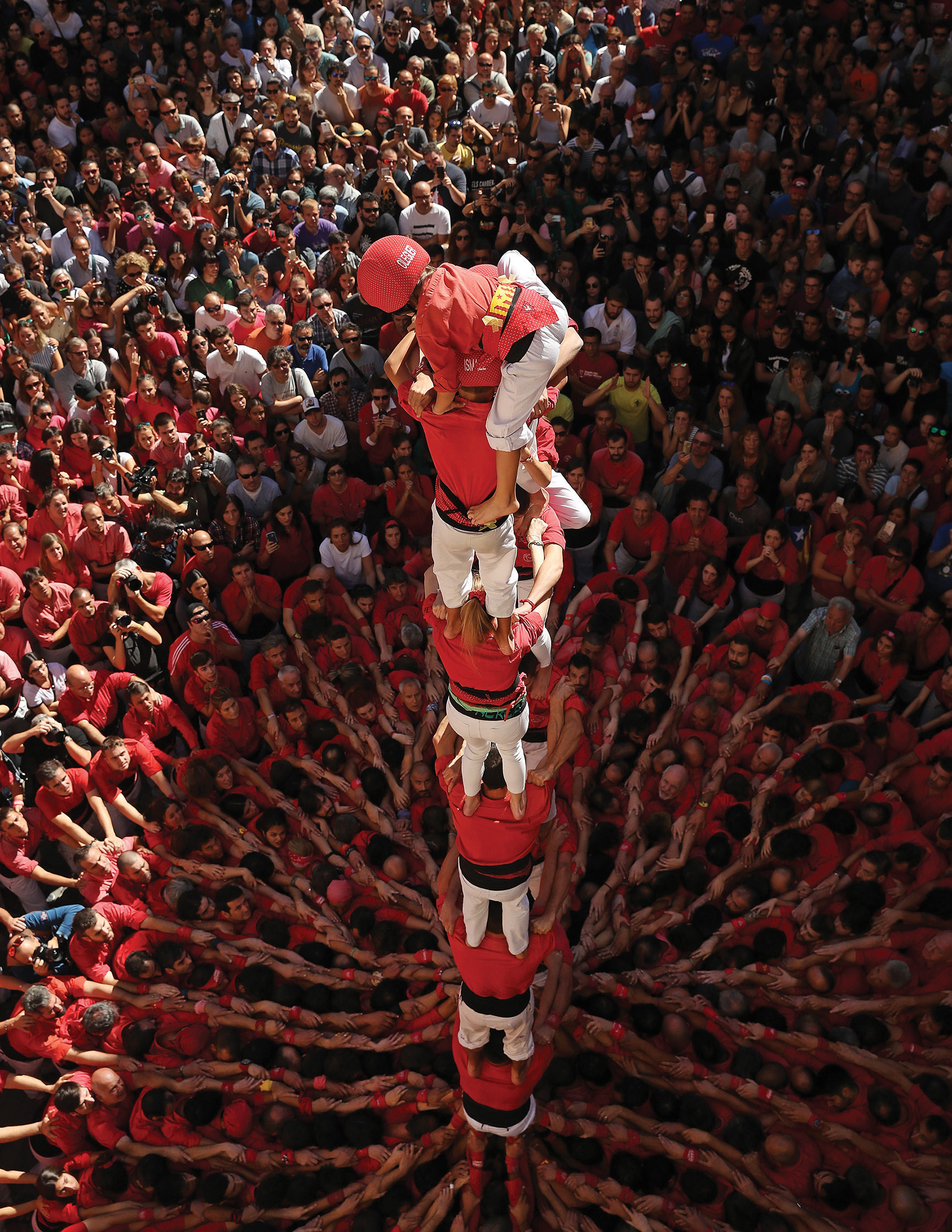 SPAIN Steady on: a helmeted child climbs a precarious human tower where he will help the final participant – an even younger child – to climb to the very top.  This is all part of the saint Ursula festival, held on 22 october, in Valls, Catalonia. There are challenges for the two teams, as towers collapse, and celebrations when the human castells are completed. since the death of Spanish dictator Franciso Franco in 1975 Catalan culture has experienced a resurgence, as have calls for independence from Spain. In September voters taking part in a controversial independence referendum  were violently attacked by Spanish police. 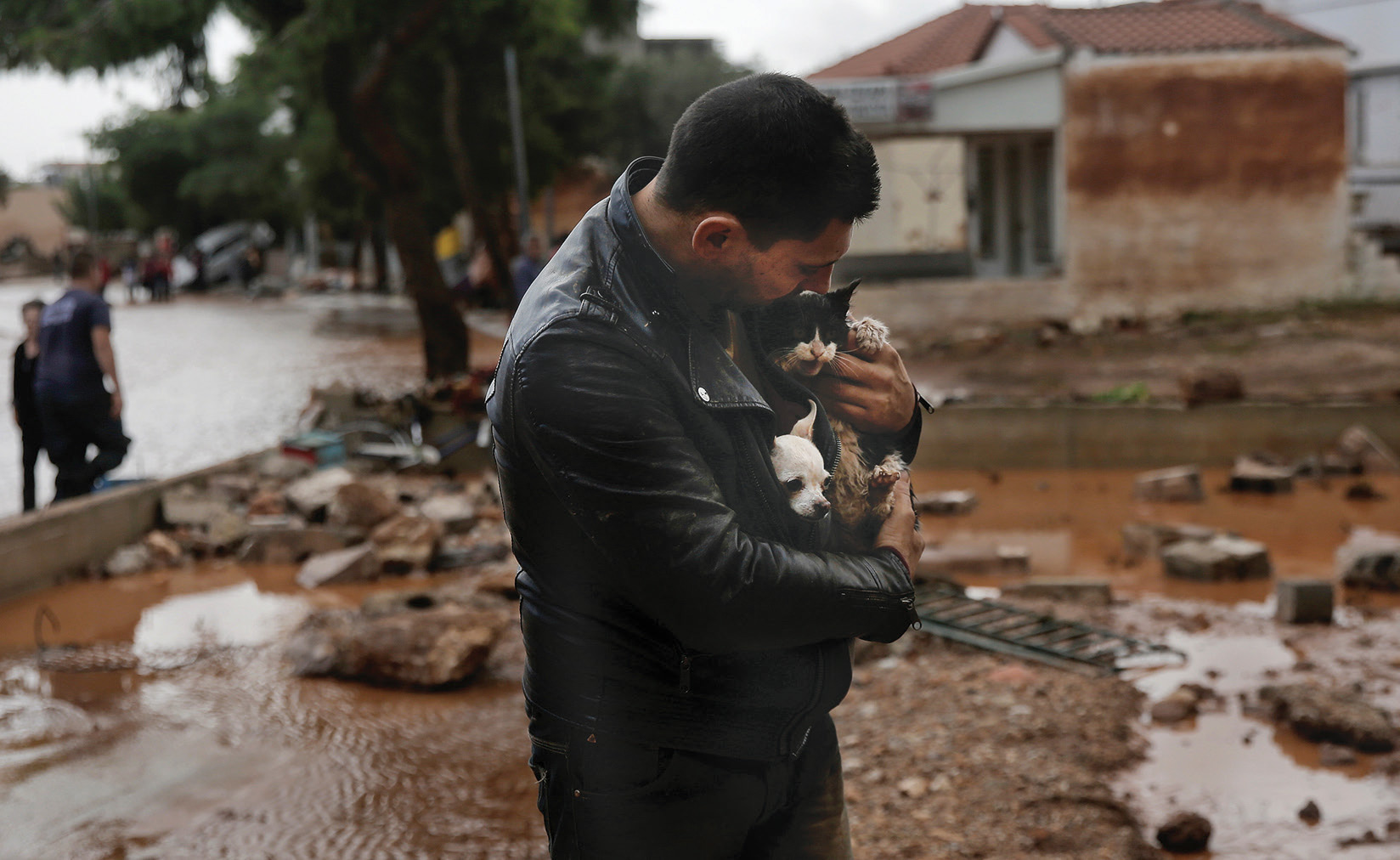 GREECE Precious cargo: a man carries a dog and a cat he rescued from a tree following devastating flash floods in the town of Mandra, Greece, in November. Residents said the devastation was ‘unprecedented’ after an overnight deluge flooded industrial towns located in the foothills of a mountain just west of Athens. at least 20 people lost their lives and Greece declared a day of national mourning. Rainfall on this scale is unusual in Greece and poor infrastructure leaves citizens especially vulnerable to such impacts of climate chaos. 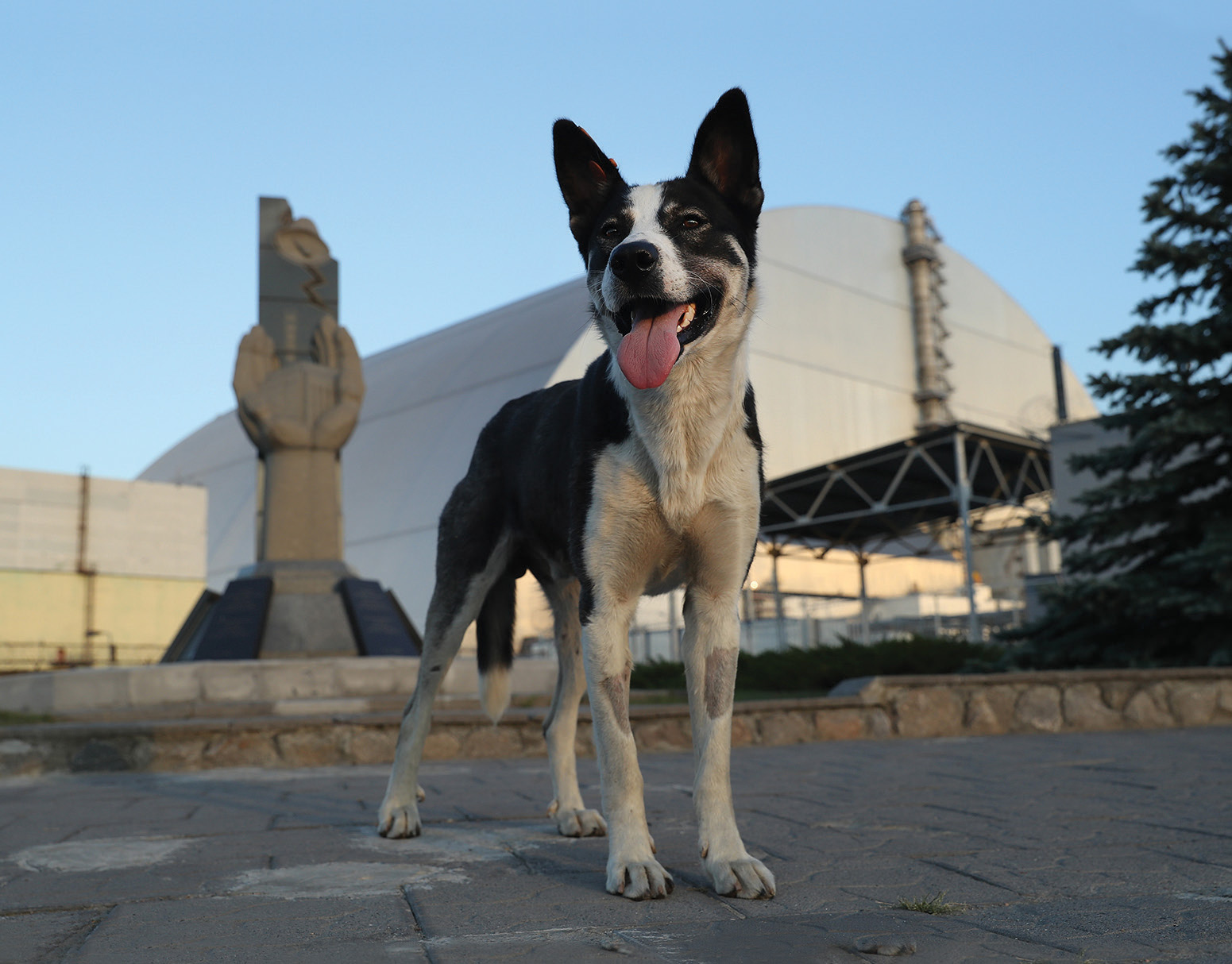 UKRAINE For 900 stray dogs, thought to be the descendants of family pets abandoned in the aftermath of the 1986 nuclear disaster, the Chernobyl nuclear power plant and exclusion zone is home. Veterinarians and radiation experts are taking part in a voluntary initiative called ‘The Dogs of Chernobyl’ to safeguard the strays by examining their radiation exposure and vaccinating them against parasites and diseases, including rabies. The dogs are tagged and then released back into the exclusion zone. some are fitted with special collars with sensors and GPs receivers in order to map radiation levels across the zone. 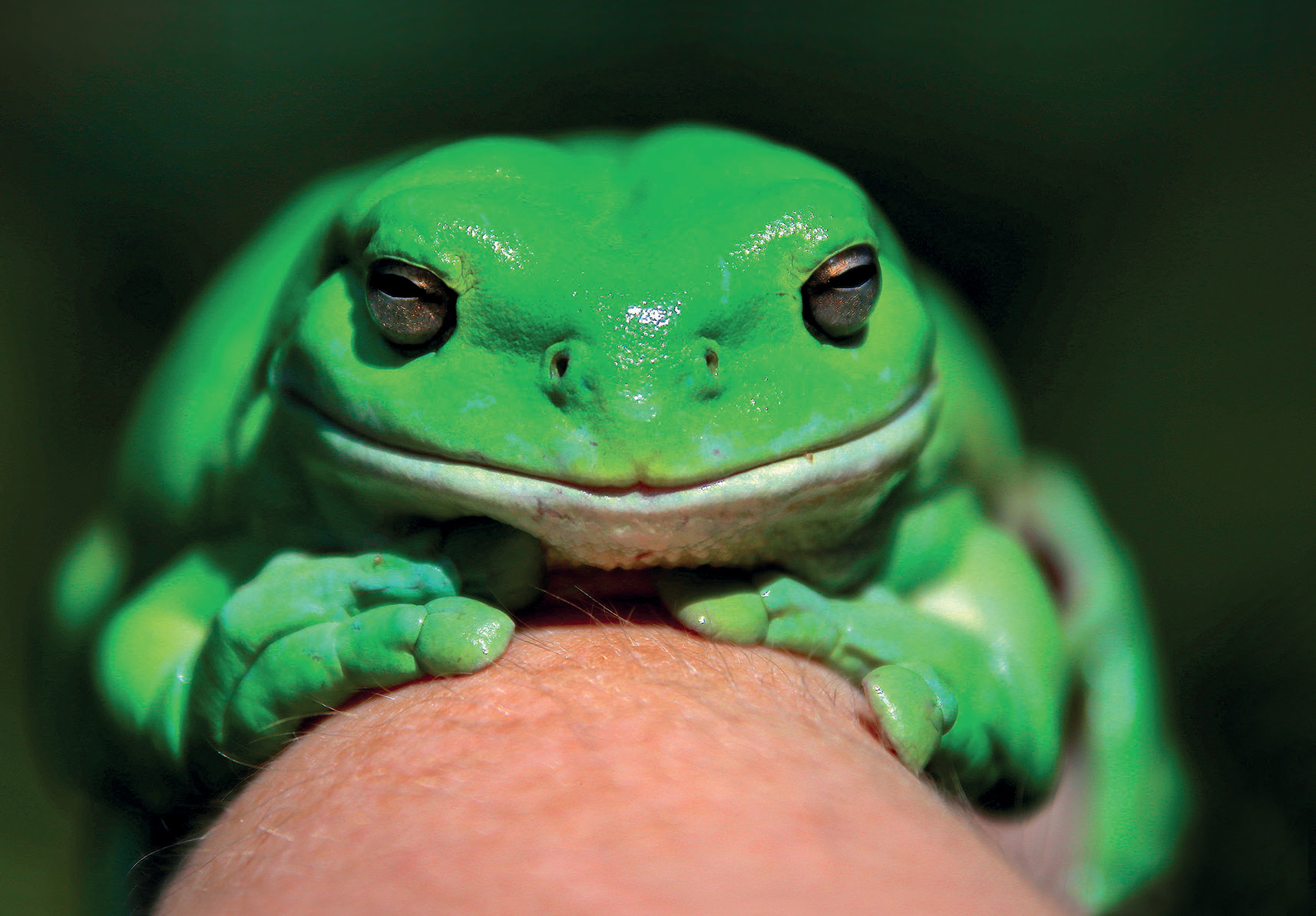 AUSTRALIA An Australian green tree frog, named Godzilla, nestles on the hand of a member of the Frog and Toad Study Group during the launch of the Australian Museum’s national frog counting phone app ‘FrogID’ in Sydney. The Museum and computer giant IBM say they have developed the world’s first smartphone app designed to let users non-intrusively record and report frog  calls, croaks and chirps. Frog populations are in decline around the world and Australia’s frogs are especially vulnerable. According to the country’s Department  of Environment and Energy, this is due to a toxic mix of climate change, pollution, newly introduced species and urban development. 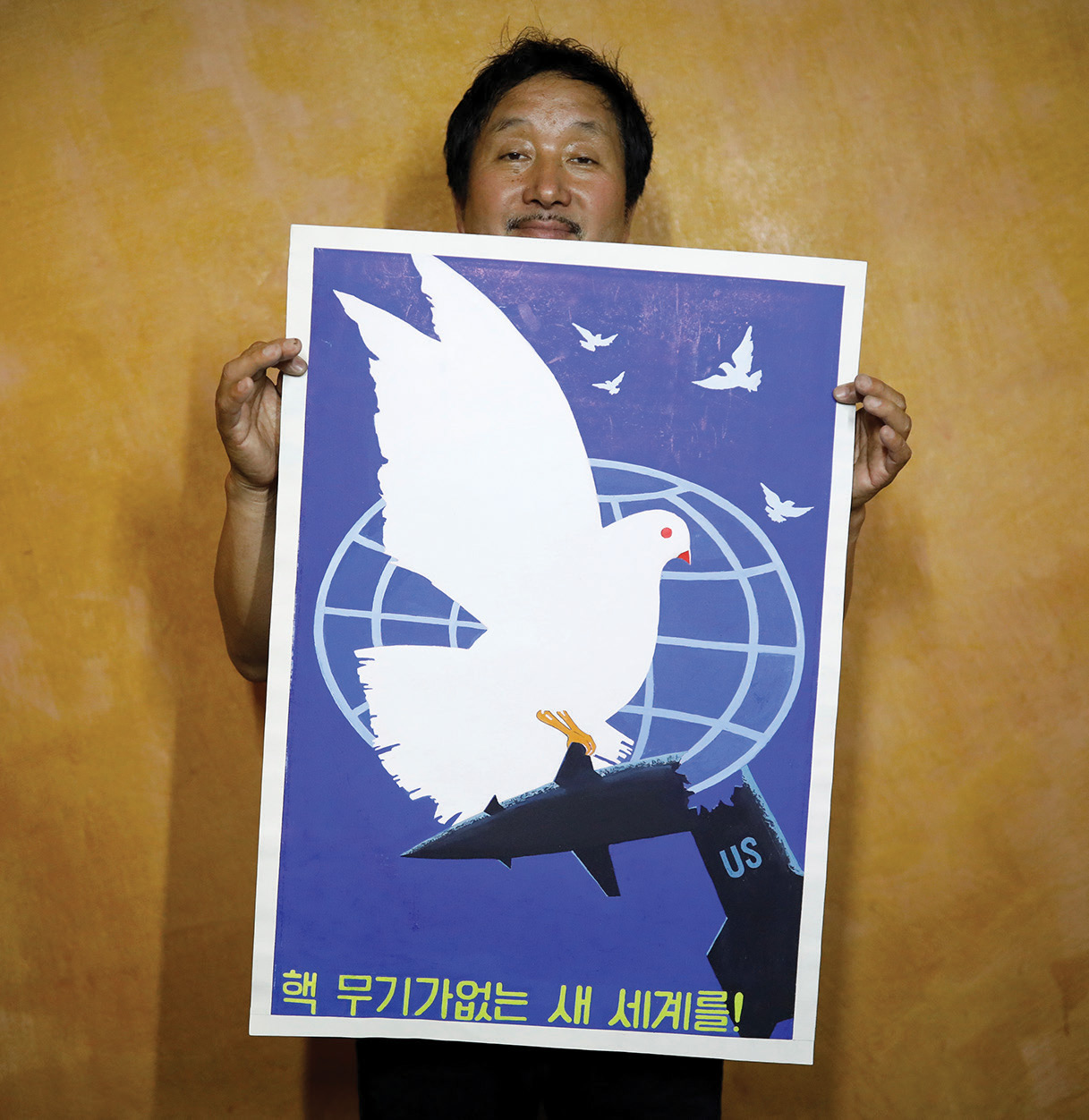 NORTH KOREA/CHINA Choi Sang Kyun, head of Gallery Pyongyang, poses with a North Korean propaganda poster which reads: ‘For the new world without nuclear weapons!’ in the Chinese border town of Dandong. The Mansudae Art Studio, run by the North Korean state, supplies work from the country’s artists and sells it in China – responding to a growing demand. With all profits going directly to the state, a UN report released in February claimed that a sector of Mansudae called ‘Mansudae Overseas Projects’ was a front for North Korea to dodge sanctions and spend on military installations. 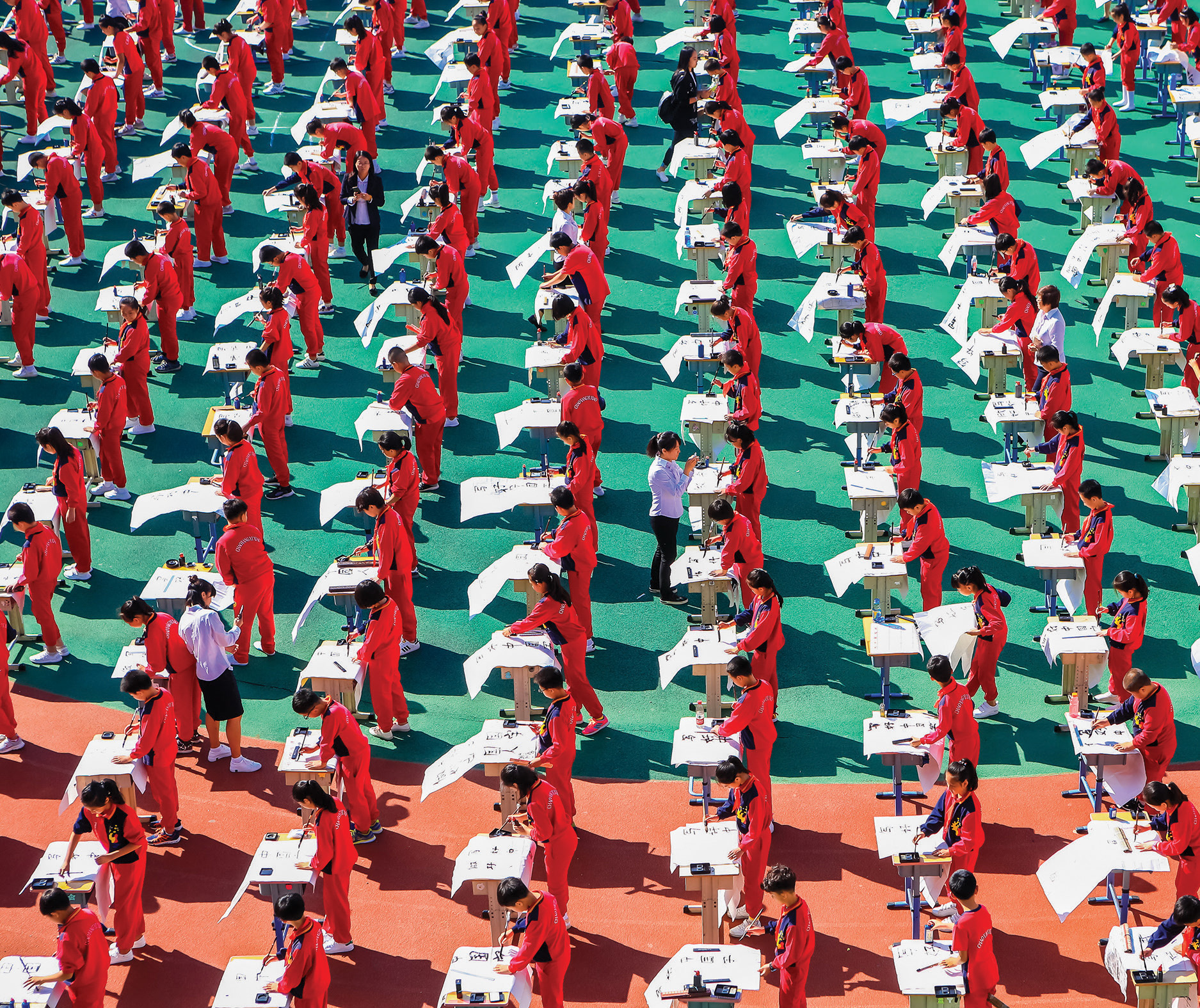 CHINA Practice makes perfect: around 1,000 primary school students take part in a mass Chinese calligraphy class in Shenyang, Liaoning Province. In recent years, schools have been urged to offer more classes in calligraphy because computer use and textmessaging is ‘ruining children’s writing style’.  The digital age affords  little time for the traditional skill of hand-drawing a Chinese character with care and accuracy and dwelling  upon its meaning. 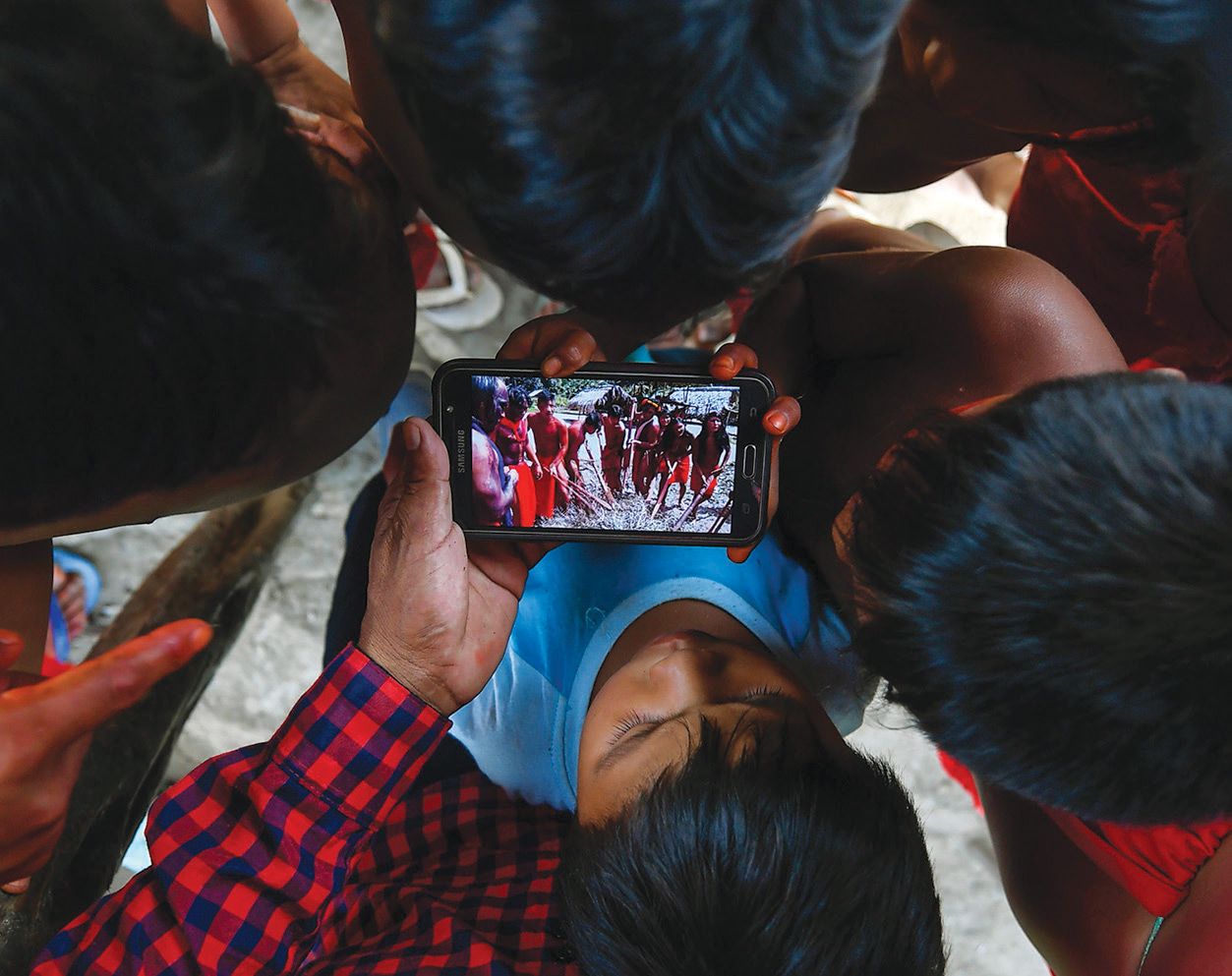 BRAZIL Waiapi children watch a video of traditional dance on a mobile phone in Manilha, a village in indigenous territory in the Amazonian state of Amapá. The Waiapi people, who number around 1,200, are resisting moves by the Brazilian government to open up a region of pristine rainforest known as Reserva Nacional de Cobre e Associados (Renca, National Copper Reserve) to international mining companies. The Waiapi are one of the most traditional  communities in Brazil’s Amazon, but modern life is edging nearer and the forest dwellers use technology to help them navigate between two worlds. 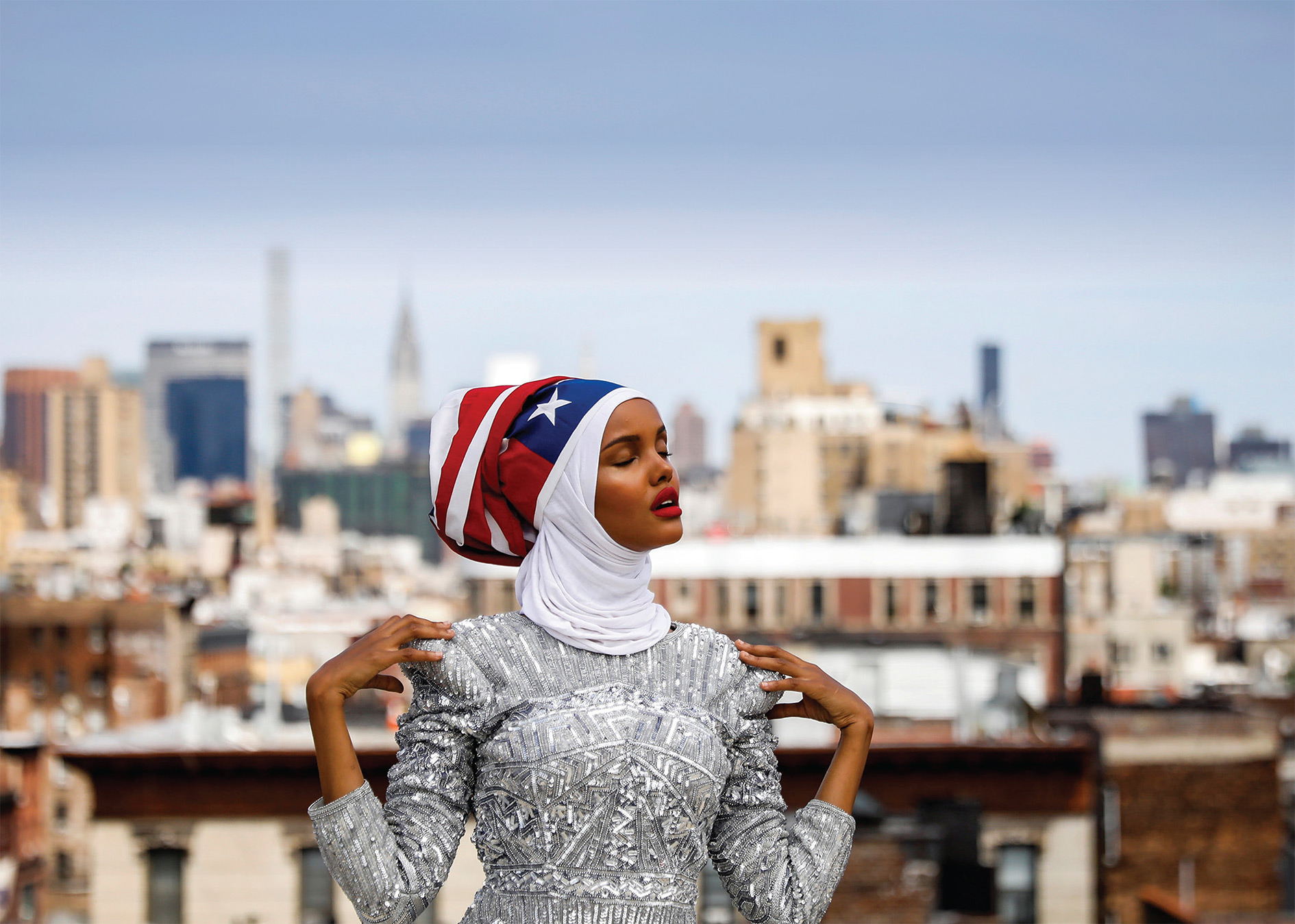 UNITED STATES Fashion model and former refugee Halima Aden, who is breaking boundaries as the first hijab-wearing model gracing magazine covers, poses during a shoot at a studio in New York City. Within weeks of his inauguration, President Trump signed an executive order to ban visas and entry for anyone, including US nationals, born in Muslim-majority countries such as Iran, Iraq and Somalia (Aden’s birthplace). Trump’s Islamophobic stance resurfaced in late November, when he retweeted several anti-Muslim videos posted by a British far-right group – sparking international outrage. 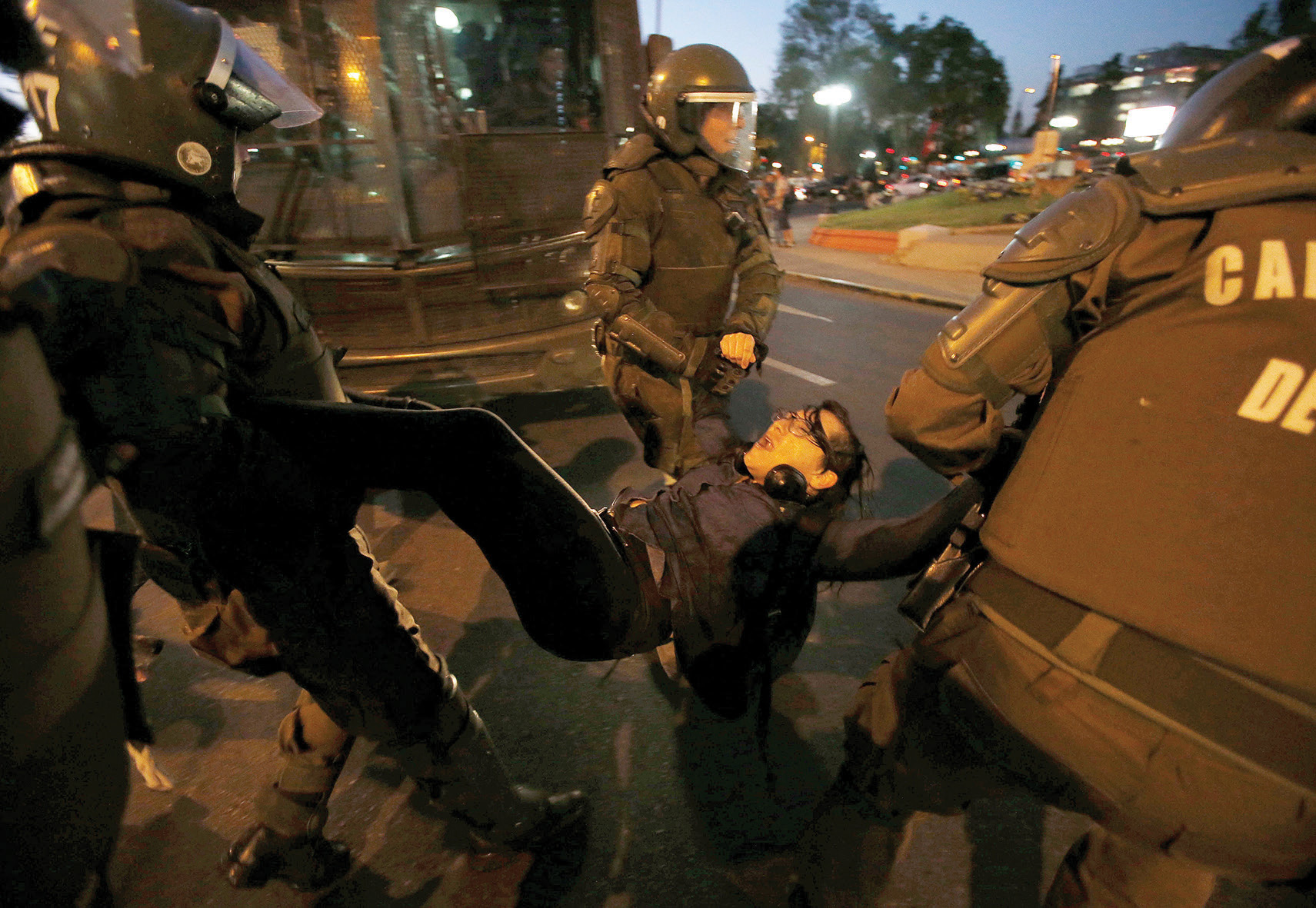 CHILE A member of a feminist organization is arrested by riot police during a rally against sexual harassment and gender violence in Santiago on 24 October. In the run-up to the December elections, Chile has experienced mass protests over a wide range of issues. Despite the country’s thriving economy, 61 femicides were recorded in 2017, and 36 women had committed suicide with violencia intrafamiliar (domestic violence) a prevalent issue. On 25 November, a crowd of 5,000 joined a two-hour march organized by the Chilean Network against Violence towards Women, calling for an end to gender-based violence around the world. 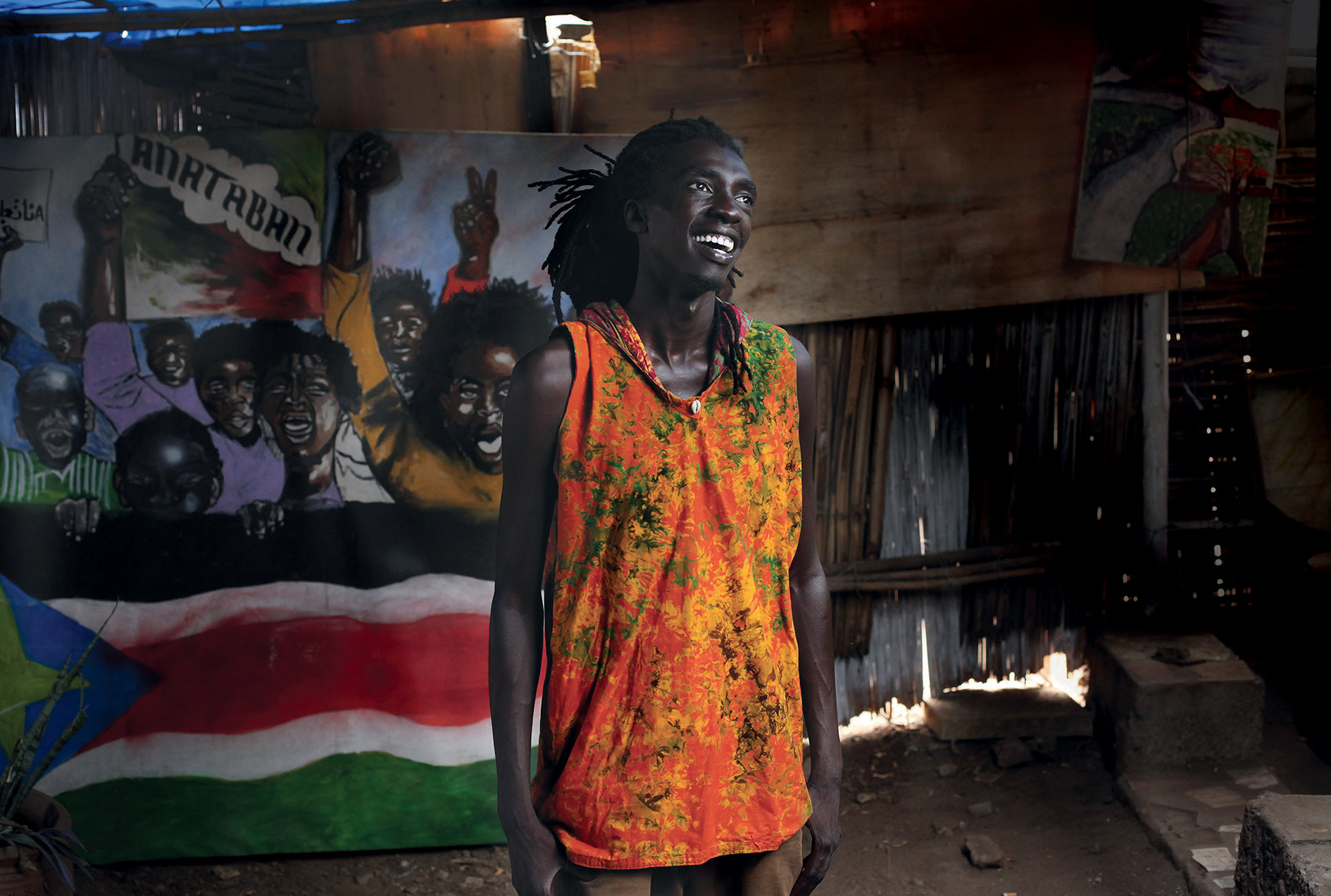 SOUTH SUDAN For four years, South Sudan has been divided by conflict and unrest. But for ‘artivists’ like Manasseh Mathiang (pictured) – who played an active role in mobilizing fellow South Sudanese to vote in the 2011 referendum – art is the perfect platform for teaching tolerance in times of division and hate. The 33-year-old is a founding member  of ‘Ana Taban’ (Arabic for ‘I’m tired’) –  a group of musicians, fashion designers and poets who use regular open-air performances to demand peace and educate fellow citizens about nonviolent conflict resolution. 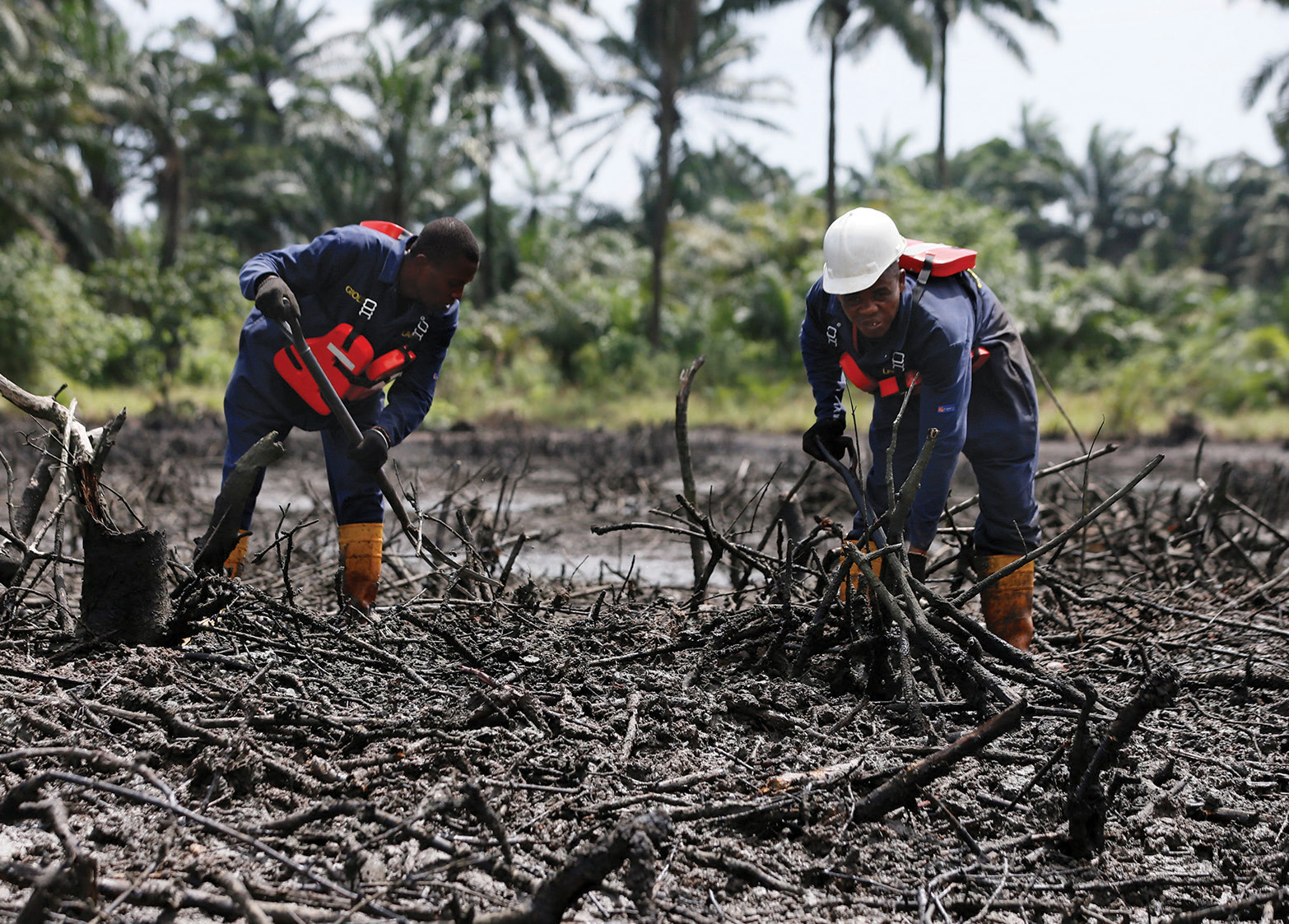 NIGERIA Equipped with high-pressure hoses and shovels, workers remove dead mangroves and crude oil – the aftermath of two catastrophic oil spills that took place as long ago as 2008 on Bodo Creek, Rivers State, Nigeria. Backed by local communities and scientists, the comprehensive clean-up is expected to last three years. It follows a decade of legal battles and international pressure to resolve divisions between locals, the government and oil companies. The Bodo clean-up area is just 10 square kilometres in size, a small fraction of the region affected. Environmentalists fear it will take 21,000 years to rehabilitate the entire Delta. 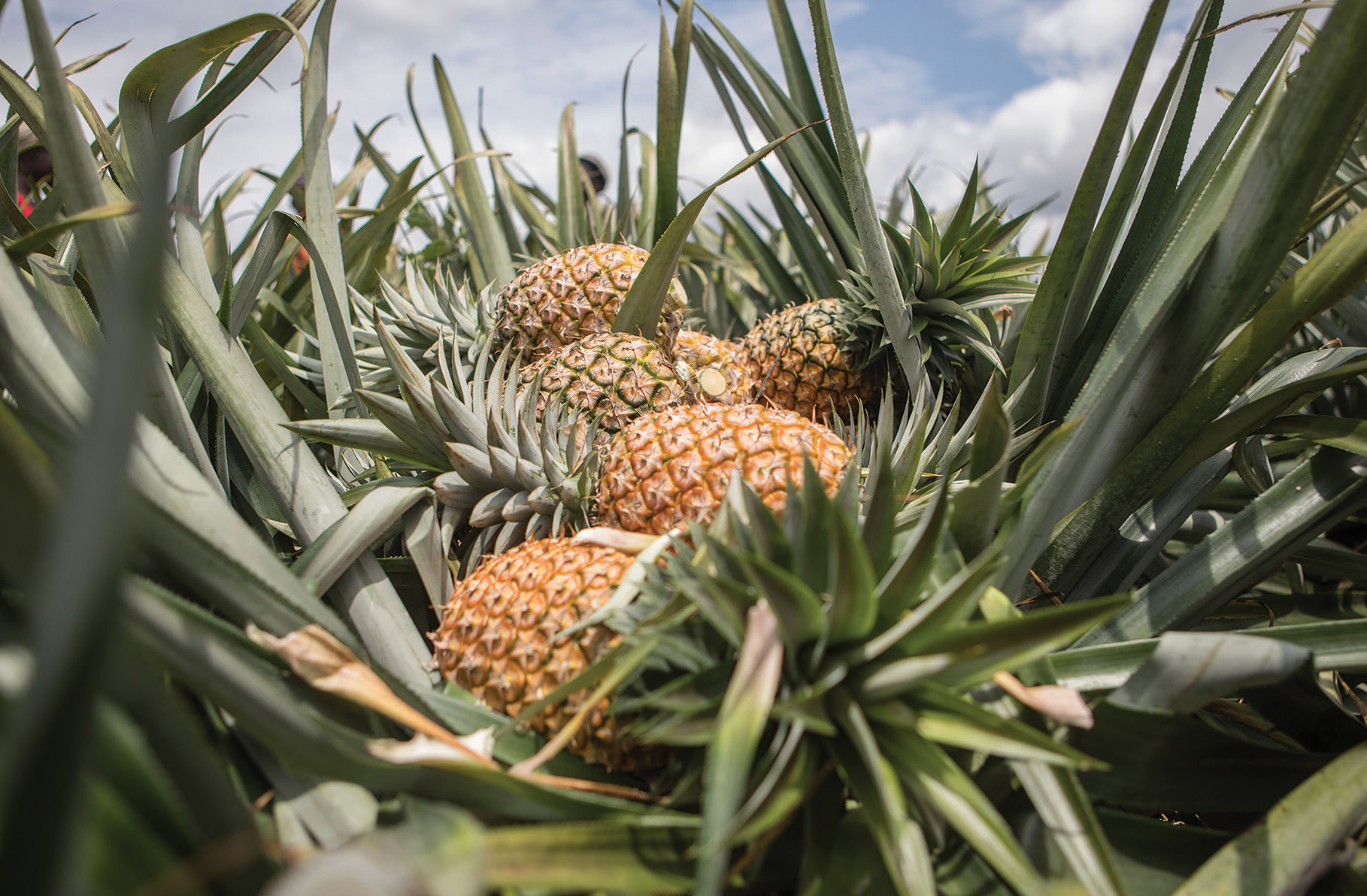 BENIN Back by spiky demand: freshly cut, gold-fleshed Cayenne pineapples take centre stage in a field in Soyo, Benin. In December 2016, Benin’s government rolled  out a self-imposed ban on all pineapple exports to international clientele after repeated warnings from the European Union that – despite being Africa’s fourth-largest exporter of the fruit – Benin pineapples contained ‘unsafe’ levels of ethephon. The pesticide is commonly used to speed up ripening – or the appearance of ripening. After eight months of training programmes and mass testing, farmers in Benin were given the green light, but resumption of trading has been slow.

Laughing and crying
Gone with the wind