Praise, blame and all points in between? Your feedback published in the March 2018 magazine. 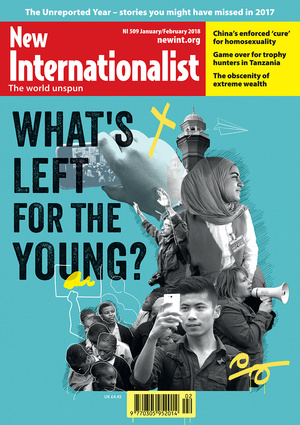 Your Country Profile on Fiji (NI 509) misreported Pope John Paul II’s words from 1986. He did not say ‘Fiji. The way the world should be.’ That’s a glib tourism slogan we’ve used for years. He said, ‘Fiji is a symbol of hope for the world.’ (I was a Fiji Times reporter covering the visit all those years ago.)

Generally, however, the article is on track. On the sugar industry it’s not that production can’t meet demand (that would tend to raise prices). It’s that our production costs exceed the world market price and, now we no longer have subsidies from the EU, Fiji farmers cannot make money producing sugar. Everyone’s offering the farmers bailouts now but that’s only to get their votes in the 2018 election. What will happen after that?

The letter ‘Unwarranted hyperbole?’ (NI 509) implies electricity cost in South Australia is made higher by renewable energy targets. So far this summer, wind, solar and the Tesla large storage battery, to the contrary, are putting downward pressure on wholesale energy prices.

Do not dismiss as ‘emotive’ or ‘unwarranted hyperbole’ concerns raised over Adani proposals for the creation of a new mega-coalmine. Choosing to ignore legitimate alarm bells prompted by this high risk proposal and playing down proven links between coal burning and catastrophic climate change cannot alter outcomes.

Coalmines are profit based, not social welfare organizations. The idea coal power can do anything to help ordinary people in India or anywhere is an illusion. Coal-fired power stations require expensive centralized distribution networks and are capital-intensive to build and maintain, tying up public and private investment resources for years into the future. Coal generation also guzzles scarce potable water, all the while producing well-documented serious health, social and environmental impacts.

The limits of tolerance

Re: And finally…, NI 508. Nitin Sawhney declares that he believes ‘all religions, perspectives and human beings are of equal value’ and says he respects ‘different viewpoints and ways of thinking’. Yet he goes on to call Donald Trump ‘stupid’, Nigel Farage ‘a modern day Iago’ and rejects ‘people who have extreme, nasty, rightwing views’. Of course this kind of double-thinking is something many of us are guilty of, but my point is that buried in the gap between the two paragraphs is an unspoken question: what are the limits on tolerance and humane relativism? I have no sympathy for Trump or the ‘nasty’ people that Sawhney castigates, but doubtless they would think that he holds ‘extreme, nasty, leftwing views’. In the end of the day, some perspectives must be rejected.

Humans vs robots (NI 507) is absolutely fascinating, but also extremely alarming, bringing a whole mountain of questions to our attention with which we need to grapple most urgently.

Re: Nick Dowson’s excellent ‘Plutocrats and paupers’: The way we speak about these two states of human existence – often also referred to as the 1 and 99 per cent – seems so often to ignore what to me appears as a fact about this ‘twitching corpse of our current system’, as Dowson so poetically puts it – that the profits of the 1 per cent are the result of a sufficient percentage of the 99 per cent having enough money to buy the manufactured or virtual products which generate that profit.

Is anyone doing the calculation of what percentage of humankind needs to have how much money to buy the robots and all the other ‘stuff’ to keep the profits flowing to the one per cent – and keep the corpse twitching?

Not that I wouldn’t like to see it give up the ghost; but if we could find a way to make the answer to the above calculation – otherwise called the ‘middle class’ – more aware of its potential power, a re-birth might be less apocalyptic.

Your articles on Humans vs robots (NI 507) illuminated the challenges we face with AI, but had little of the creative optimism we need to tackle these problems. Scepticism is only one portion of the ingredients necessary for change. We also need equal parts of hope and possibility.