Praise, blame and all points in between? Your feedback published in the June 2018 magazine. 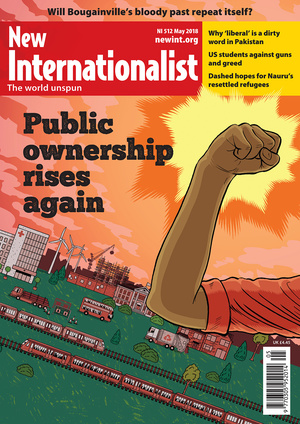 Your issue on public ownership (NI 512) missed the point that ownership by state or municipality is not all that different in reality from private ownership. Working in a nationalized coalmine in the UK was no better than working in a privately owned one.

The real alternative is common ownership, where the people truly own and democratically control the resources of the planet, and where production takes place to meet human need, with profit a thing of the past.

The attacks on humanitarian workers described in ‘Who cares?’ (NI 511) tend to focus on countries with authoritarian and undemocratic regimes. It is often overlooked that some of the worst perpetrators in recent times are democratic civilian governments like Sri Lanka.

On 4 August 2006, during the separatist war with the LTTE rebels, 17 employees of the French NGO Action Against Hunger (also known as Action Contre la Faim or ACF) were shot at close range in Muttur, eastern Sri Lanka. The victims included 16 minority Tamils and one Muslim.

According to strong evidence from ICRC and Human Rights Watch, as well as satellite imagery, the Sri Lankan armed forces also repeatedly struck hospitals within the ‘safe zone’ in the northern Vanni region in indiscriminate artillery and aerial attacks toward the end of the conflict in 2009.  A few brave doctors who dared to speak out about what actually happened were detained and forced to retract their statements by the government.

I believe abortion is an issue about human rights, the most basic of these being the right to life. Through the years I have joined others in the struggle to uphold the right to life, e.g. in campaigning for the abolition of the death penalty and in opposing war by registering as a conscientious objector. Like the suffragettes and the early feminists who were pro-life, I recognize that we cannot gain equality by denying it to others. Balancing people’s rights is not easy and difficult decisions may have to be made. However, these decisions can be made with due reflection and compassion without recourse to negating the unborn child’s right to life.

What sort of world do we want to create? We must continue to fight for the protection of our planet; a fair distribution of wealth; the eradication of poverty; an end to war; access for all to good healthcare, education and housing; and the safeguarding of all life born and unborn. Maybe then the fair and peaceful world I and millions long for will become a reality.

In your March issue (NI 510), a crucial connection goes begging: that between your major feature on black liberation movements, and the short report earlier in the issue on deaths in UK immigrant prisons (mainly by suicide).

With shockingly little resistance, ‘immigration’ has become a highly effective proxy for old-style racism. Immigrant prisons (and the massive, global border control industry that has mushroomed in the past 20 years) are there overwhelmingly to incarcerate and disrupt the lives of black and brown people – and we all know this.

Every intensification of anti-immigrant law has been the easily won fruit of little waves of well-reported violence against blacks and Asians by tiny far-right groups, always accompanied by a drum beat of anti-immigrant lies in the rightwing media. Meanwhile, the political establishment and supposedly ‘liberal’ media seem to seek almost any excuse not to confront these developments squarely. For example, the BBC has never, to my knowledge, given air-time to anyone arguing against border controls – despite wide apparent support for the idea of free movement in the population at large: a YouGov poll in 2011 found a 54 per cent majority in favour of free movement. And as many campaigners can verify, this is a view shared by many politicians and campaigners, but only in private; almost never in public.

The glaring obscenity running through Immigration Control, is that nobody knows, or ever has known, why immigrants per se need to be controlled at all, still less, punished or killed.

Endless reports and studies have failed to produce any evidence that immigrants as such do any harm. Even the anti-immigrant pressure group Migration Watch admitted once that migrants were net contributors to the economy (but only by ‘about a Mars bar per person per week’). The real damage, they concluded, was that migrants undermined our cultural values and social cohesion – a conveniently vague concept, which might be usefully applied to the socio-cultural gulf between rich and poor in Britain or the US. (Curious coincidence: anti-immigrant rhetoric is shrillest where these wealth gaps are greatest).

Undeterred, governments of wealthy nations have gone obediently on the warpath, anxious to prove their ‘toughness’. Drownings and suicides are mere PR problems, too-easily accommodated by the grim ideology, drummed into people in the rich world since the 1970s, that ‘we must be cruel to be kind’.

Since Brexit, the viciousness of the anti-immigrant turn has become blatant, and spilled into more areas of life. The tendency has been nourished by supine media and politicians for too long, and we are all in danger of reaping the whirlwind. If ever it was high time for a politics that embraces and defends humanity, without qualification, that time has arrived.

In praise of White House dysfunction
Democracy in prison
Back