If the global financial crisis symbolized the decline of the West, it also signalled that the future belongs to China – a superpower that ‘understands’ the developing world better than the US, IMF or World Bank, according to Martin Jacques. 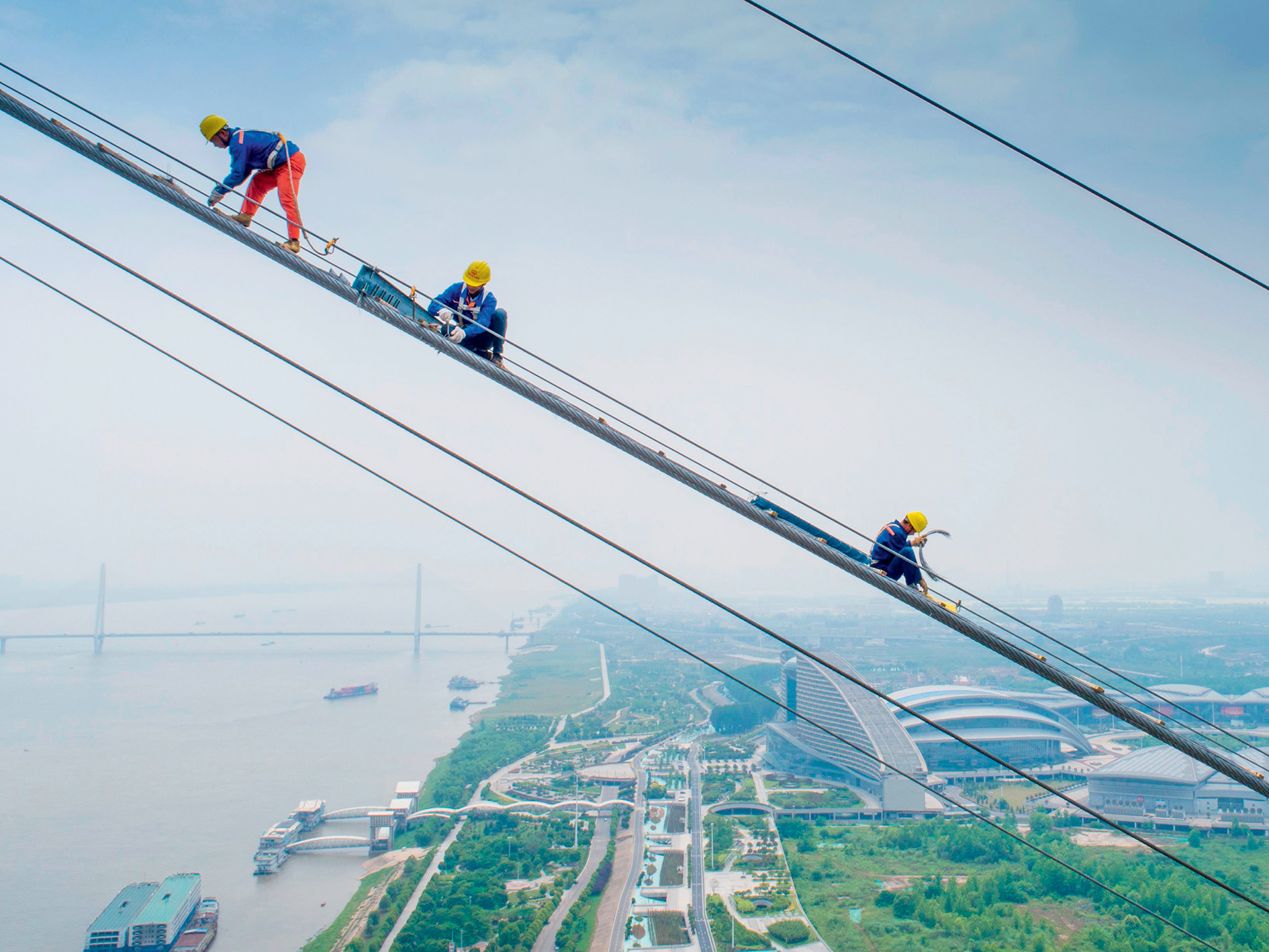 Workers labouring on a suspension bridge across the Yangtze River in May 2018.
Photo: AFP/Getty Images

Yohann Koshy: How did China respond to the global financial crisis?

Martin Jacques: It was essentially a Western crisis but China had to respond because the American and European markets, on which it was quite dependent, went down very badly initially and [it did this] by having a huge stimulus programme. It pumped very large amounts of money into the economy and the consequence was that Chinese growth went down slightly but remained very high. It was pushing 9 and 10 per cent during this period and, in fact, went up to 12 and 13 per cent.

In the longer period, basically what happened was a serious attempt to shift the centre of gravity of the Chinese economy. In 1978, China’s economy was a 20th the size of the US economy. The reforms over the following decades were about becoming an export-driven economy, dependent on cheap labour that came from powerful migratory movements from the countryside to the main cities, with, of course, very strong input from the state.

But since the financial crisis the shift has been towards an economy that is increasingly dependent on domestic rather than foreign consumption, with much greater dependence on research and development, and with a lower growth rate. The new norm for a growth rate is between 6.5 and 7 per cent, which China has maintained to this day. But when the economy is growing at that rate, given the size of the whole country, the global impact is still enormous: China’s been responsible, since the Western financial crisis, for somewhere between 40 and 50 per cent of global growth. Without the Chinese economy, the global economy would be in a mess.

Could China be going down the route of financialization like the Western economies? Blackrock, the huge hedge fund, was recently granted a licence to start operating there.

Well, I don’t think the Blackrock announcement itself constitutes anything like that. I think the Chinese will very strongly resist going down that path. Of course, they need a strong financial sector. They will need to develop capital markets [financial venues where cash can be raised for investment]. But the thing is that the Chinese economy is very different to the US economy. It’s still got tremendous manufacturing capacity and emphasis on the importance of scientific and technical labour. The state is very fundamental to the way in which the Chinese economy works. They’ve also been much more able to deal with special interests in the way the Western economies haven’t. The banking sector became [dominant] within Western societies during the neoliberal period from the late 1970s through to the financial crash. It seems to me there’s very little evidence of this happening in China.

And when Mark Carney says he’s worried about shadow banking in China...

The main debt problem in China is corporate debt. The state-banking system, but also to some extent the shadow banking system, has built up indebtedness because it’s sometimes over-lent to schemes, plans and investments which weren’t that sound, and that has increased. But it is not, like the US or Britain, the state which is indebted… So it’s a problem but it’s an internal, rather than external problem. What really did for the smaller Asian economies during the Asian financial crisis [in the 1990s] was that they held major assets in foreign currencies and suddenly, as their currencies fell, their debts increased rapidly.

Also, the Chinese population itself is not indebted. They tend to have very big savings, which is one of the reasons behind the country’s financial strength… You have to say that the economic management of the Chinese economy has been quite remarkable. They’ve gone for 35 years without a serious crisis. Compare that with the West!

After 2007-08, the Chinese realized… they couldn’t rely on the interests of US economy and the global economy being aligned. They had to develop their own institutions. The Americans had also dragged their feet on reforms to the IMF because they wanted to retain control of it.

In this situation you don’t want institutions like the IMF and World Bank, which are essentially Western institutions whose primary function is serving Western economies. You need something with a much more expansive and inclusive view of the world… This is why we’ve seen the Asian Infrastructure Development Bank, the New Development Bank (the BRICS bank), and we’re going to see a much bigger development of this altogether with the Belts & Road initiative [a massive infrastructure programme that aims to improve connectivity between Europe, the Middle East, Asia and Australasia]. The vehicle for the global transformation for the next period will be this Belts & Road initiative.

I understand why Chinese investment has been welcomed by governments. However, in Ecuador there are indigenous communities protesting against rapacious Chinese mining companies. In Gambia, local fishers are being crowded out by Chinese firms. At a moral and political level, how should China deal with these struggles? Because there is no development without conflict.

You’re right: there is always conflict in development. China has, with great speed, developed a presence in many different developing countries. On the one hand, this has led to growing demand for commodity producers [in poorer countries] – from oil to metals like iron ore – and that’s had a powerful effect on their economies. On the other hand, China is also extremely competitive in lots of industries and this can have negative effects. There are plenty of examples where China on the low-end of manufacturing has out-competed with firms in the developing world that haven’t got the scale and level of investment to compete.

In terms of the relationship with places like Africa and southeast Asia, Chinese companies have been a major factor in developing the beginnings of a serious manufacturing capacity in places like Ethiopia, which by and large never really had one before. I think that China’s relationship with Africa has been basically very positive. I’m not saying there haven’t been problems. For example, there is a lot of resentment about Chinese companies bringing Chinese labour into some of the infrastructural developments. But the reason I think it’s been broadly positive is that China was a new source of demand for commodity producers in Africa. That means they were no longer just dependent on Western demand; it became a competitive market, which bid up the price of commodities during that period and meant that they were in a better economic situation.

Secondly, and this is why I deeply resent the argument that China is the new colonial power in Africa, China understands the problem of developing countries. One of the big problems is developing infrastructure that delivers transportation, energy and the necessary building blocks of a more developed economy. What China has done in all the major countries in Africa is to provide road systems, railways and so on. For the Chinese it’s all about development.

China has not always behaved well. If you take Myanmar, it got far too close to the military regime [that is persecuting the Rohingya] and a weakness of the Chinese is… [that they often arrive in new countries without being] sufficiently sensitive to local opinion. That has definitely happened in Myanmar and Sri Lanka. So those kind of tensions are real and important. And no doubt the Chinese will make many more mistakes. The question is whether they learn from them. So now they’re learning how to deal with civil society in other countries because they don’t have a civil society in the same way as most countries.

Let’s end with the US. There is growing bellicosity between the two superpowers. However, their economies are also dependent on each other. China owns more US debt, in the form of Treasury bonds, than any other country, which in turn allows the US to spend beyond its means and buy China’s products. Is this sustainable?

The difficulty in the West is the inability to make sense of China. Listen to the BBC’s Today Programme, read The Guardian: there is little sense of this shift in the world. How many articles have there been on the Belts & Road initiative, which is the most important global project of this era?

Ironically, Trump was the first leading US politician to recognize US decline: this is the premise of ‘Make America Great Again’. He is, however, deluded in the belief that he can reverse it. I do think there is going to be a trade war, but nothing will [reverse China’s rise]. These are deep historical forces at work, just like the rise of Europe in the 16th and 17th centuries were deep historical trends. So America has to come to terms with the rise of China and renegotiate its relationship with China. At the heart of any answer to your question is this: how is the West going to handle its own relative decline?

Martin Jacques, former editor of Marxism Today, is the author of When China Rules the World (Penguin).

The next financial crisis
War of words