Lazinho and Lucas di Fiori of Brazil’s famous Banda Olodum talk to Alessio Perrone about 40 years of drumming up change. 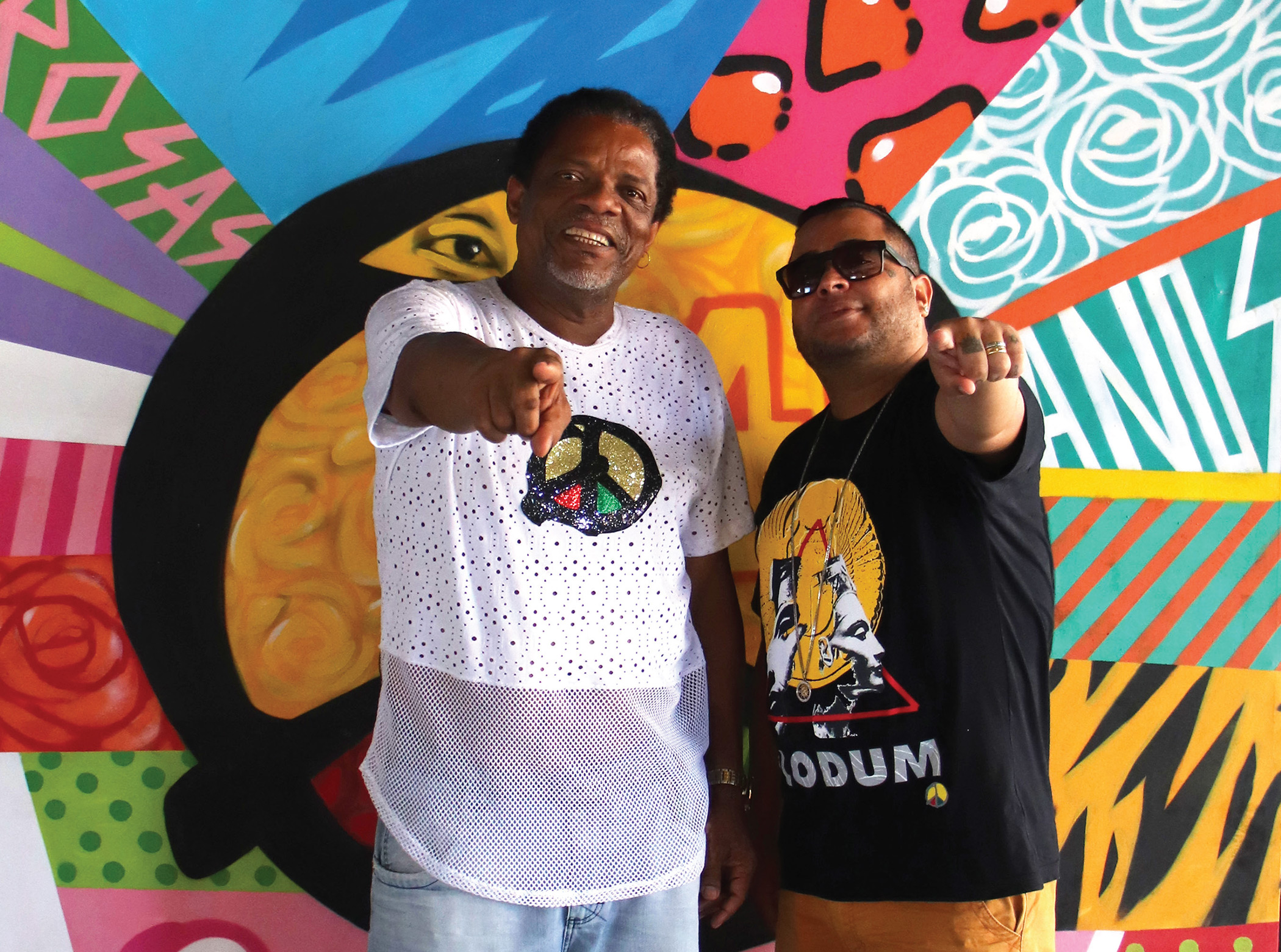 Banda Olodum turned 40 in 2019 and you still rank among the most popular musicians and activist groups in Brazil. What are the reasons for this success?

Lazinho: Change. I’m one of Olodum’s founding members: we began just to have a way to participate in Carnaval because we Afro-Brazilians living in Pelourinho [the historical centre of Salvador, the capital of Bahia state] didn’t have the right to do that. People used to think that only thieves and prostitutes lived here, and that wasn’t true. When residents applied for jobs, they gave the addresses of friends that lived elsewhere.

We ceased to talk only about Africa; we talked about Bahia and all social problems, about black people in other countries. We were criticized for talking about Cuba – why would a bloco afro talk about Cuba? Because black Cubans and Cuban black music share the history of Olodum and Bahia.

And we immediately addressed the wound and talked about social issues beyond Carnaval. We denounced the authorities’ mistakes and police brutality, while also raising awareness about all the hard-working residents and the good things that Pelourinho had to offer.

Our music changed, too. With the input of Neguinho do Samba [a founding member who died in 2009], Olodum created its signature beat, the samba-reggae. It’s a more cadenced rhythm that everyone can dance to – it doesn’t require samba’s skills. And it’s a rhythm that can be played across musical genres: we record rock, samba, reggae, romantic music, salsa…

That gave Olodum a lot of momentum, together with the start of our social projects to revitalize Pelourinho and our school. These gave us our longevity.

We began travelling, raising awareness about what was happening in Brazilian and Bahian society. We joined other struggles and musicians – we invited Nelson Mandela, we played with Jimmy Cliff and Paul Simon… We were never precious about samba-reggae. We gave something and received something else in return – the exchange was the most interesting part.

What came first, the music or the activism?

Lucas di Fiori: It was never just music. The party atmosphere passed quickly and the social aspects arrived. We talked about women’s issues, about Jesus’s skin colour – why is he portrayed as fair-skinned and blue-eyed if he was born in a place where people are brown? We asked everyone in Pelourinho to come and play with us and to bring with them their problems – so that we would start talking to each other.

Our main goal has always been that in the future no Brazilian will have to fight to reaffirm themselves and that all can live naturally in a more equal society.

Music was a means to act, to make sure this community had dignity. That they too could have fun – because here in Pelourinho, while the rich celebrated Carnaval with joy, black people pulled ropes to put up the floats. Olodum’s activism managed to give Pelourinho visibility, to make sure that the authorities looked at us with different eyes. Today, it’s one of the most visited places in Brazil.

Lazinho: The founding of Olodum gave this community a voice and created a sort of neighbourhood forum that didn’t exist before. After our success, many told us, ‘you have to move to Barra’ [a more affluent area of Salvador]. If we leave Pelourinho, our strength would end. Olodum’s energy changed this place, but if we leave, we would lose that energy.

In Brazil favela dwellers suffer marginalization, stigma and violence and yet are often thought guilty of their condition. Why do you think that is?

Lazinho: There is a lot of prejudice. We are the country that kills the most women and LGBT people in the world. I think it’s a matter of media, prejudice and racism. And it’s also a failure to understand that culture is what makes people rich.

Lucas: It’s a lack of knowledge and love for your neighbour. There are drug traffickers that say they talk on behalf of God; thugs that set fire to terreiros [temples of Afro-Brazilian religions]; racial, gender and religious prejudice.

Every 23 minutes, a black Brazilian is killed. This is extermination! Brazil is living in a system of hate – and this is a recent development because I don’t remember this in my childhood.

Brazil is a big favela, a big community where a tiny minority retains most power and wealth, and the great majority lives on the edge of society.

Lucas: Our goal is that no-one should have to take to the streets to tell you, ‘You have rights, you have to fight to demand and protect them.’ This mission is strengthened now that Brazil is going through crazy times. Recently we saw the government electing as president of the Palmares Foundation [a government body promoting black culture in Brazil] a black person who thinks that slavery was beneficial to slaves. This is the kind of brainwashing that the world is going through.

Olodum is an example of how music can empower communities. Why do you think music, and drumming in particular, have that power?

‘Drums have the power to make people listen, they call everyone to dance. Drums can reach you with their vibration, even if you can’t hear’

It’s what drums do: they have the power to make people listen, they call everyone to dance. Drums can reach you with their vibration, even if you can’t hear. You can feel a drum being played.

Lucas: Drums are Olodum’s weapon – the most powerful weapon, because everyone wants to play. But we couple that with a worldview of acceptance. We want everybody to feel welcome, in our band and across the world.

Alessio Perrone is a freelance journalist whose writing has appeared in The Guardian, Columbia Journalism Review, and Al Jazeera, among others. He tweets @alessioperrone.