How to stop progress

Dana Drugmand explains how the powerful car industry has continually blocked change to keep us hooked. 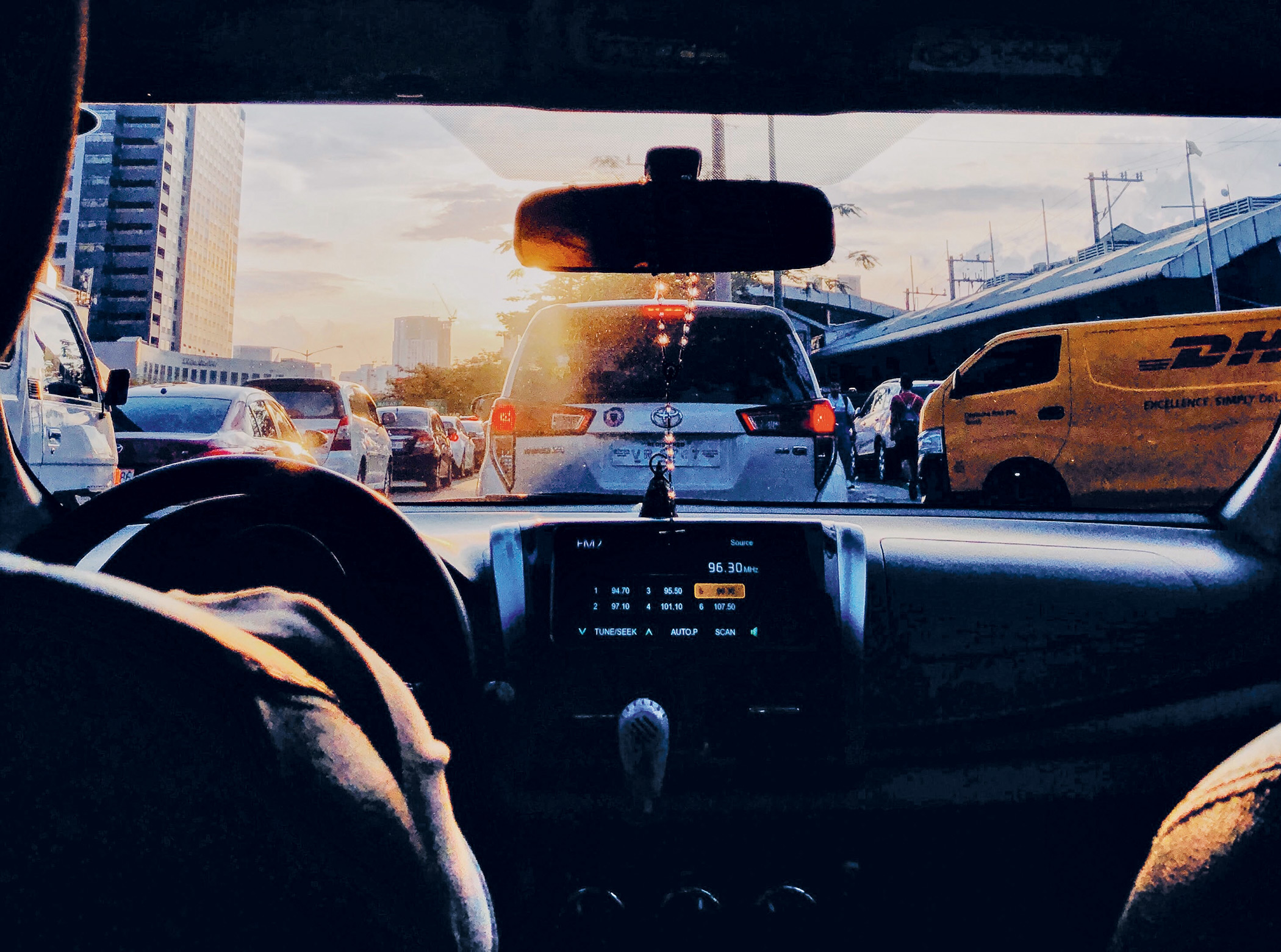 In a jam: sitting in traffic in Metro Manila, the Philippines.
Photo: Joline Torres/Unsplash

If we added together all the ways our transport is killing us it would show a global massacre, with one of the biggest perpetrators being the motor car. Over a million people are killed on the world’s roads each year. Automobiles are a leading source of greenhouse-gas emissions and air pollution and a reason for many of us to do less exercise.

Over a billion cars, burning up nearly a quarter of global oil consumption, crisscross the land, often sitting stationary in jams, chugging toxic fumes into the air. But these small metal boxes also mean ease and freedom; they help people get to work and see their loved ones. For many they are a lifeline.

Is it possible that cars, or the corporations that make money from their reign, have too much power? Global auto sales may be stalling, but there is a long way to go before cars loosen their grip on our lifestyles, health and planet.

Curbing our car addiction is imperative to protect human health and fight climate change, but the $4-trillion automobile industry has consistently blocked and delayed progress. Companies claim they are committed to reducing their impact on the environment, while simultaneously fighting regulation and stalling the transition from fossil fuel to electrified transportation.

The auto industry points to barriers to the transition to electric vehicles (EVs) in terms of their affordability and lack of infrastructure (charging stations, for example) and investment. But it has also fought bitterly against change.

Julia Poliscanova, director of the Clean Vehicles and Emobility section of the campaign group Transport & Environment (T&E), says that national car lobbies have consistently tried to limit ambition levels on reducing carbon dioxide and other emissions. She says that the ‘toothless’ benchmarks Europe has for EV sales are due to opposition from the auto industry to any kind of stricter quotas.

‘The reason has always been to delay and limit the technology changes, as the car industry aims to maximize profits on selling the existing diesel and petrol cars and delay investments into zero-emission technology,’ Poliscanova explains, adding that petrol and diesel cars must be phased out over the next 15 years. ‘For Europe to be climate neutral for 2050, the last car with any petrol or diesel engine, or running on fossil gas, should be sold no later than 2035.’

Automakers want to maximize profits from their most polluting products

In the US – where transportation is the largest source of greenhouse-gas emissions – the oil and auto industries have also worked to slam the brakes on any attempt to clean up. Automakers want to maximize profits from their most polluting products – Sport Utility Vehicles (SUVs) and pickups – and the oil industry wants cars to be less fuel efficient so it can sell more gasoline.

Today, SUVs account for almost half of all cars sold in the US and a third of those sold in Europe. These status symbols are often considered to be safer but they are significantly more likely to kill pedestrians and drivers in crashes. The International Energy Agency has predicted that if consumers’ appetite for SUVs continues to grow at the current pace, these vehicles will wipe out the emissions savings from nearly 150 million electric cars.

Koch Industries has been at the forefront of hindering change. The petroleum giant’s lobbying expenditure was up by almost 20 per cent in the third quarter of 2019 compared to the same time period the previous year. It spent millions lobbying to weaken or repeal key transportation policy proposals that could have been harmful to its interests. In October 2018 a Koch lobbyist wrote to US senators urging them to oppose legislation that would extend tax credits on electric vehicles. The letter cited two studies by conservative thinktanks that are funded in part by the Koch network and big oil companies like ExxonMobil.

Koch clubbed together with others in the oil and gas industry to contribute $54,821 to Republican Congress Representative Roger Williams’ 2020 campaign cycle. Williams (who used to be a car dealer) has introduced bills proposing to repeal fuel-economy standards which are designed to push car manufacturers to produce vehicles that can travel further on the same amount of fuel.

The oil industry also played a key role in Donald Trump’s attempt to roll back the stricter mileage and greenhouse-gas emission standards for vehicles set by his predecessor Barack Obama. The Trump administration’s Safer Affordable Fuel-Efficient (SAFE) Vehicles rule would freeze standards at 2020 levels and would revoke California’s authority under the Clean Air Act to set its own, more stringent standards. The state was given an exemption because of its past problems with smog (see page 28). Instead of having to develop different emission systems for different states, car manufacturers had been making vehicles to the California standard.

‘Automakers have historically fought regulation and that fundamentally hasn’t changed,’ said John DeCicco, associate director at the University of Michigan Energy Institute. ‘They use their clout to lobby against anything that will erode the sale of petroleum products. For those concerned about climate and the transportation sector, it will take standing up to Big Oil and Big Auto.’

A report by InfluenceMap revealed that automakers are prominent among the 50 most influential companies on climate and energy policy globally.1 Fiat Chrysler, Daimler and BMW led the list of negative influencers, because of a ‘strategy to control and delay the regulatory agenda on vehicle emissions and electric vehicles’.

More than a dozen countries have plans to phase out and eventually ban the sale of fossil fuel-powered vehicles. In Britain, the government recently announced plans to ban petrol and diesel cars – including hybrid vehicles – by 2035, five years earlier than previously announced.

A switch to electric vehicles and eliminating tailpipe emissions seems like a massive step in the right direction, but it’s not a silver bullet. Electric cars still take up valuable space and the rush to mine minerals such as the lithium and nickel used in batteries is having a devastating environmental impact on an increasing number of places around the world.

Also, electric cars haven’t dispensed with tyres and brakes and still travel on roads – the wear of all these things leads to harmful particulate-matter emissions. Researchers have put non-exhaust emissions of particulate matter at over 85 per cent of all such emissions from traffic.2 Electric vehicles are on average 24 per cent heavier than conventional ones, leading to more non-exhaust emissions from wear. An increase in their popularity might not have a big impact on PM levels.2

How green electric vehicles are also depends on how clean the electricity sources are – and this can vary across the world. Researchers have estimated that production of an average electric car involves greater carbon-dioxide emissions than for an average petrol-driven car – mostly thanks to the production of the battery. But over its entire life­cycle, the electric car would be responsible for 80 per cent of the emissions of the petrol car.3

Sustainable transportation advocates are pushing for a rethink on how we travel altogether, including re-examining land-use policies that encourage sprawl and driving. From investing in clean public transit to restricting car use in city centres, policymakers have options when it comes to reducing traffic congestion and air pollution.

There are some hopeful signs. A study by consulting group Kantar surveyed residents of 31 of the world’s largest cities and found preferences shifting towards alternatives to private car use.4 According to the research, private car trips will decline by 10 per cent on average by 2030 and make up around 46 per cent of city mobility. Public transit, cycling and walking will increase and account for nearly half of city travel over the same period. But accelerating this shift will require support from the authorities.

‘For decades, government policy has done everything in its power to encourage car ownership and suburbanization, and to discourage cycling, walking and public-transport use’

‘For decades, government policy has done everything in its power to encourage car ownership and suburbanization, and to discourage cycling, walking and public-transport use,’ says Jemilah Magnusson of the Institute for Transportation and Development Policy, an international advocacy organization. ‘This is unfortunately not just a US issue, as this type of mid-century city planning has been replicated around the world, especially in major population centres, such as India, Brazil and China.

‘For truly sustainable transport, we need to focus less on the vehicle and more on the numbers of people moved. Cars are the most inefficient way possible to move people in cities, and electric cars are not much better.

‘We need real, quality mass-transit alternatives that have priority on the street, and get you to your destination faster than driving. That’s a challenge, but it’s no mystery. We know what to do and how to do it.’

Dana Drugmand is a US-based freelance journalist focusing on climate and energy. She currently writes for the website DeSmog where she reports on oil and auto industry opposition to electric vehicles and cleaner transport.

Toxic Air - The Facts
Fed up with the fumes