Beyond the tourist trail

Graeme Green speaks with local experts about why wildlife protection in Africa and Asia must push beyond relying on international visitors and foreign professionals towards sustainable, locally led initiatives. 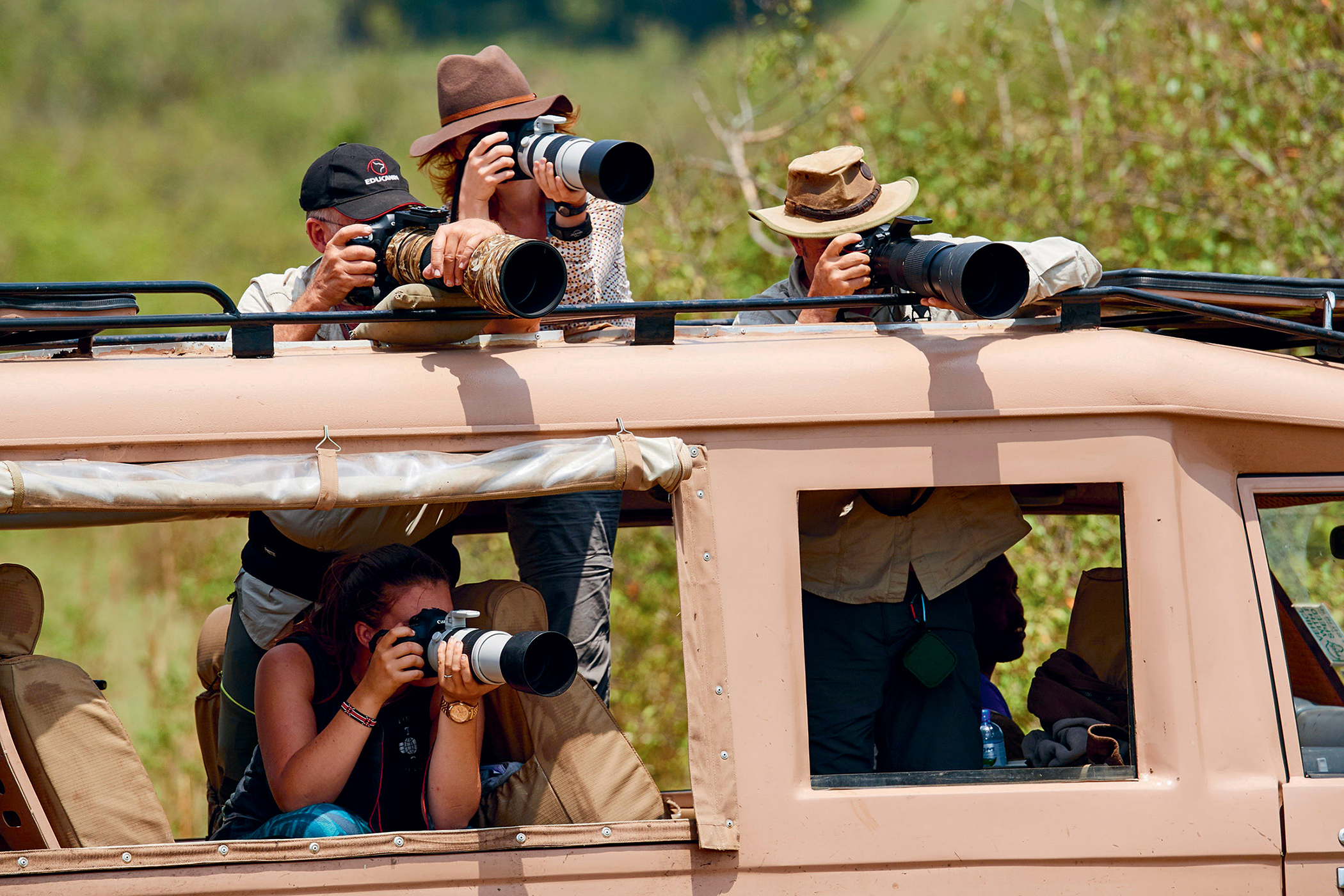 The devastating impact of the Covid-19 crisis has been felt across Africa, not least in national parks, reserves and wildlife areas. With the dramatic loss of tourism, jobs have disappeared. Poverty has increased. Poaching has risen, fuelled by people’s need to eat or sell meat. There’s less money for vital conservation work.

‘The crisis has shown the vulnerability of depending on tourism as an income source,’ says Gladys Kalema-Zikusoka, a Ugandan vet and founder of Conservation Through Public Health (CTPH), that protects mountain gorillas and other wildlife. ‘Dependent communities are left with nothing to survive on. And it’s been a wake-up call to realize how much tourism is sustaining conservation efforts.’

Around the world, wildlife tourism supports 21.8 million jobs. Before the crisis, it was contributing $23.9 billion a year to the African economy. Gorilla tourism in Uganda alone brings in an estimated $34.3 million and contributes 60 per cent of the Uganda Wildlife Authority’s revenue. But, according to the World Tourism Organization, visitor numbers to Africa last summer were down by 99 per cent.

Ebola outbreaks, terrorist attacks, conflicts and the global financial crisis had all also previously stopped people travelling, making tourism-related jobs precarious even prior to Covid-19. Ideas for diversification were already being explored, but the current crisis has increased the urgency. ‘Relying on tourism is dangerous because anything can happen,’ says Kalema-Zikusoka. ‘If there were more jobs around national parks and wildlife areas that don’t rely purely on tourism, the impact of Covid-19 wouldn’t have been as great.’

For years, many wildlife charities have been paying local people to be part of conservation work, from planting trees to monitoring wildlife. But this requires large amounts of outside money.

People need jobs that are more sustainable. In Uganda’s gorilla hotspots, CTPH created Gorilla Conservation Coffee, a social enterprise where farmers get above-market prices for coffee. A donation for every bag sold goes to support communities and conservation work. ‘We’ve started to sell it outside Uganda, in the US, Europe, New Zealand and South Africa,’ Kalema-Zikusoka explains. ‘Even during the pandemic, people can still make a living.’

Beehives are being installed in Kenya, Tanzania and other countries, in order to reduce human-wildlife conflict by deterring elephants from villages, while providing food and creating jobs producing and selling honey. Chillies work the same: elephant deterrence, food, income.

From Indonesia to Peru, conservationists are helping to develop sustainable agriculture in wildlife areas. ‘We’re developing alternative livelihood programmes in case another disaster hits in the future,’ explains Nabin Baidya, Programme Manager for Wildlife Conservation Nepal, which is helping communities make a living from bee-keeping, livestock and non-timber forest products, including cinnamon and herbal oils. ‘There have been many programmes initiated on a small scale but they might not be enough, especially in areas where large numbers of tourists used to visit. It’s essential to scale up, so more community members benefit.’

Small businesses, not just food but textiles, jewellery, clothing and soap, for example, can create sustainable incomes and reduce the need to poach wildlife or destroy natural resources. But currently it’s hard to match international tourism as an economic driver in wildlife areas. 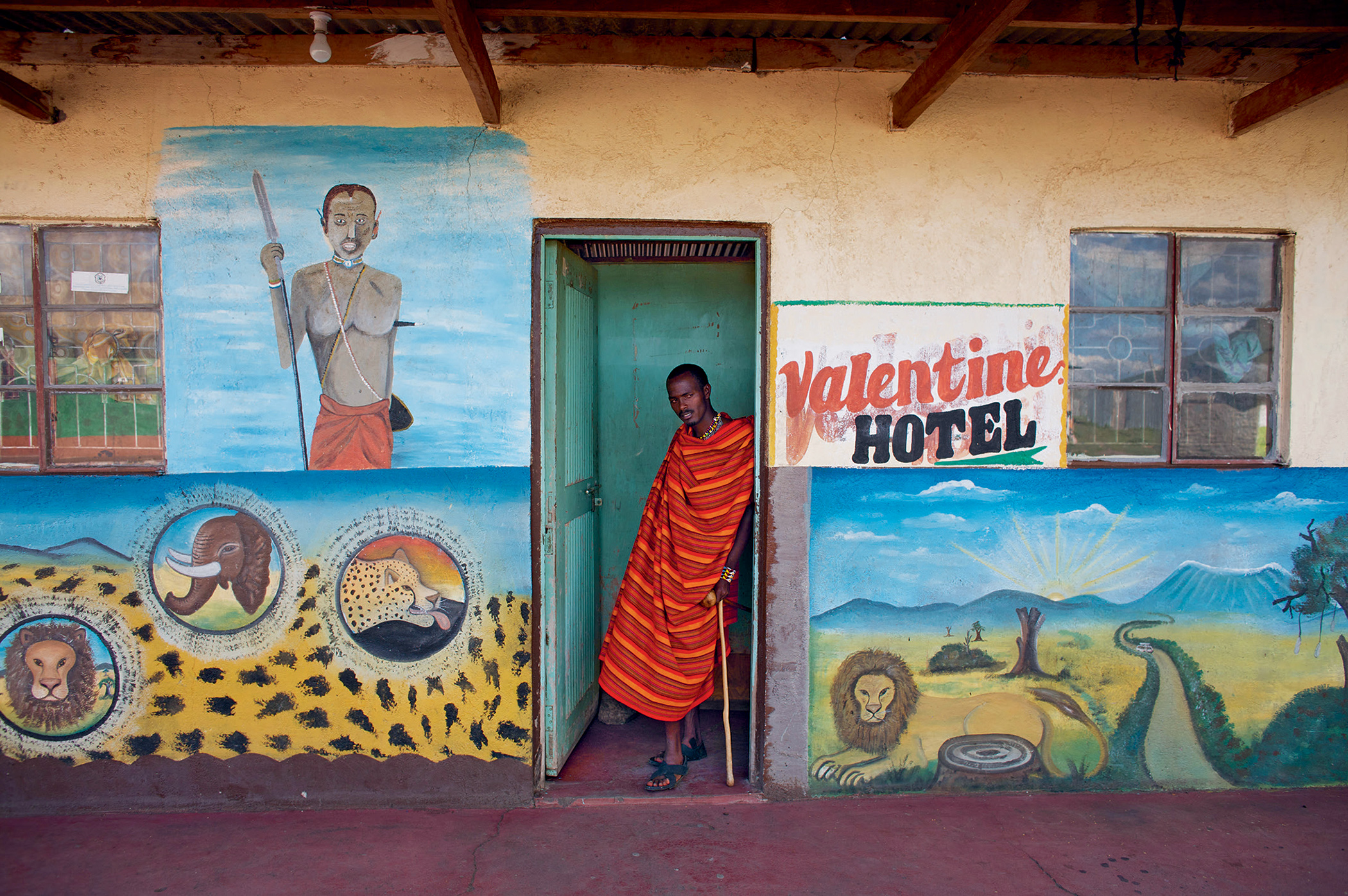 A Maasai man at a lodge on the tourist trail, Kenya. Maasai people are becoming participants in the tourist economy on their community-managed lands.
Photo: Ton Koene/Alamy

There’s another more fundamental question about relying on international tourism and sectioning off vast spaces mainly for foreign travellers. ‘Kenyans have come to see wildlife as something only for tourists,’ says Paula Kahumbu, CEO of Kenyan non-profit Wildlife Direct. ‘But these national parks are also phenomenal outdoor classrooms, areas for recreation or for other income generation.’ She’d like to see more domestic tourism and local people using national parks for anything from education to engaging with indigenous cultures. ‘We’ve been stuck on international tourism because it’s been so profitable until now,’ says Kahumbu. ‘It’s time for us to change that.

‘Tourism is an economic activity. Wildlife is not just tourism – it’s a basic right. Kenyans don’t even have the basic right to go and enjoy the wildlife. You have to pay a lot of money because the whole thing was designed around income generation.’

That disconnect means a lack of ‘ownership’. ‘People think: “It’s not my problem if there’s a threat to wildlife. The problem is being experienced by foreigners who want to come and see these animals.”’

‘What does an adventurer or explorer look like? It’s a white man with a beard and a hat. I’m sick and tired that the people “exploring” Africa are still the exact same model’

Such disenfranchisement has a long history. The creation of many African national parks involved local people being evicted, including the San people from Moremi Game Reserve in Botswana and the Makuleke from Kruger in South Africa in the 1960s. ‘Local people are still suffering from the impact of the abuses of colonialism,’ Kahumbu argues. ‘People were physically removed from their homes and forced out. Protected areas are for people who pay a fee. You lose access to water, to land. It’s saying that people are not part of the natural environment. A lot of Kenyans struggle to even engage on conservation when there’s still so much injustice that’s never been resolved.’

Conservation as a white Western concern is perpetuated on film and TV explains Kahumbu, who produces the documentary series ‘Wildlife Warriors’. ‘The creators of wildlife documentary films captivate audiences. The images of white vets and scientists and black poachers have infected our view. Black stories are not often told.

‘I work with partners trying to pitch ideas for documentary series featuring African conservation heroes. There’s no appetite for it in global television networks: we’re the wrong colour for that story. What does an adventurer or explorer look like? It’s a white man with a beard and a hat. I’m sick and tired that the people “exploring” Africa are still the exact same model. If we’re to save our wildlife, we must change this image. The future of Africa’s wildlife will not be decided by somebody from England or America or Belgium, but by African leaders.’ 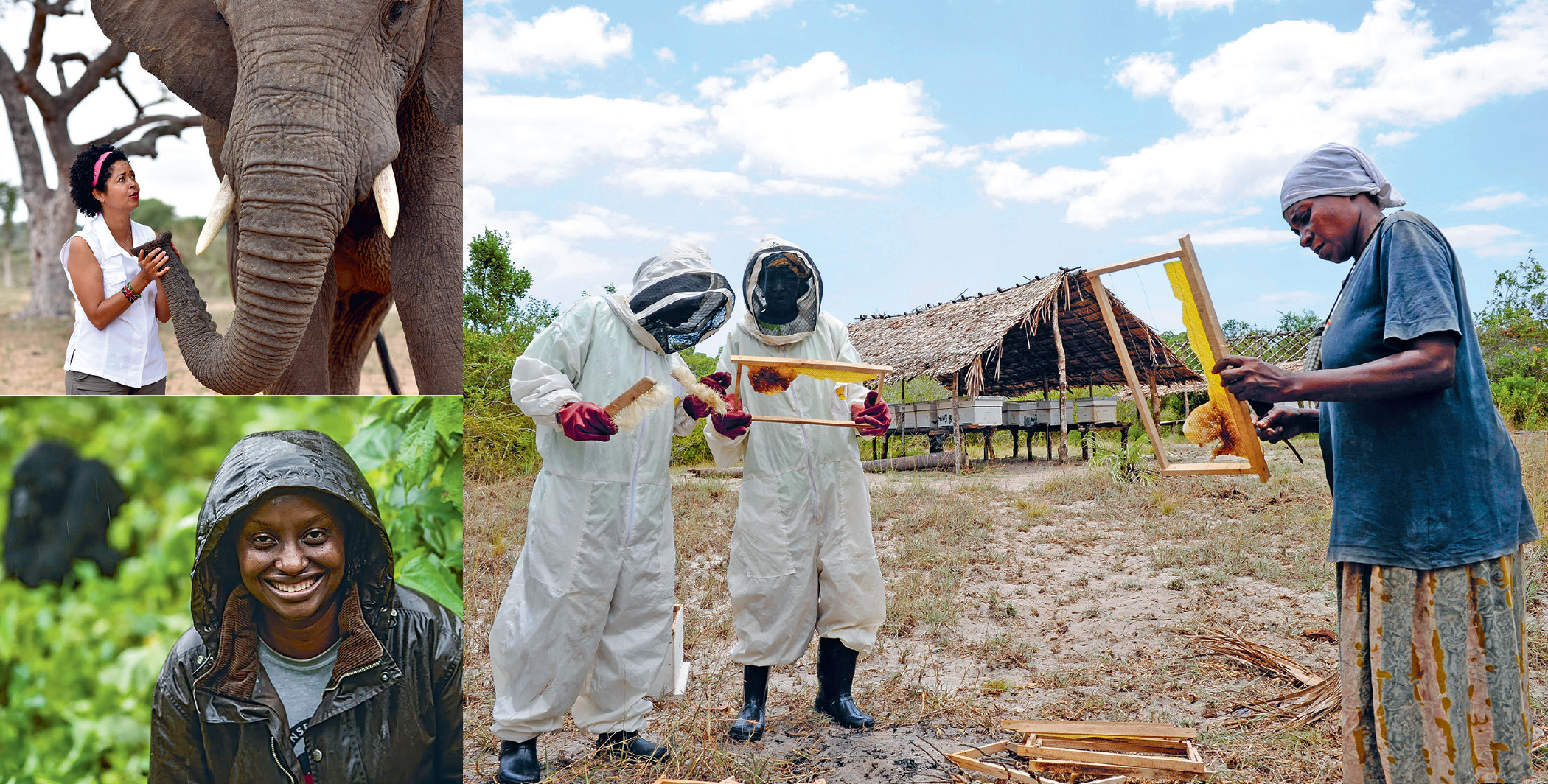 There are international charities and remarkable Western conservationists who work tirelessly to help protect threatened wildlife and habitats, but almost all NGOs now recognize that any strategy that alienates or omits local people is doomed to fail. The militarized ‘fortress conservation’ approach using fences, dogs and guns still goes on, and some will argue it is necessary. But many see long-term success being more likely if safe spaces are created for wildlife without dispossessing local populations, not least because wildlife is often found outside of protected parks, in corridors, dispersal areas and buffer zones on community land.

Local people need to be integral as decision-makers, not just a labour force to enact an outsider’s plan. And they need to share in the benefits. ‘The biggest issue for conservation in Africa today is equity,’ says Kahumbu. ‘If you look at who’s making money from Africa’s wildlife, it’s clearly not the people on the ground who are living with it. They’re poor. They live from day to day. The tourism industry has until now been thriving. People have been getting extremely wealthy. The people who live on these lands need to thrive economically for conservation to work.’

Tourism offers a stark example of wealth inequality. In Africa, travellers can spend $2,000 a night in a lodge in places where some local people can’t afford to eat. The killing of Rafiki, a silverback gorilla in Uganda’s Bwindi Impenetrable National Park, shocked the world last summer. ‘The poacher who killed Rafiki was a very hungry desperate poacher, among the most vulnerable in the community,’ says Kalema-Zikusoka. ‘He needed to eat and would’ve sold some of the meat. He wasn’t poaching gorillas but he came across Rafiki. It made me realize maybe we’re not reaching everybody. We need to start addressing hunger.’

Africa has its own homegrown inequality, too. The continent’s three richest billionaires have more wealth than the poorest 50 per cent of the population, around 650 million people. Land distribution, lack of opportunity and education, corruption and tax avoidance are all factors. Getting local people to protect wildlife in such dire and bitterly unfair circumstances is always likely to be difficult.

One encouraging approach being used in Africa is the move towards conservancies, community-managed areas where land-owners, often Maasai, lease their land for tourism uses. Community associations are often central to decision-making. It’s a tricky balance, but the wildlife is protected and the Maasai are still able to raise their cattle. Local people profit, while tourism and conservation provide additional jobs. Conservancies have been hit hard by the drop in tourism, but as the Maasai can still make a living from cattle, the impact has not been as drastic as elsewhere.

With the world’s wildlife in crisis, we’ll need more ideas like this in future. The race to find solutions will require the combined efforts of everyone: international organizations, local NGOs, politicians and communities. The biggest shift must be in leadership, argues Kalema-Zikusoka, who describes African wildlife conferences where there are just one or two Africans. She has spoken to African conservationists who left their careers early ‘because they never go up the leadership ladder’, a squandering of talent. The exclusion hasn’t just been based on race or class; Kahumbu recently criticized the Kenya Wildlife Service for a ‘webinar’ with an all-male panel. ‘What are the organizers telling us? That we are invisible? Unimportant? Irrelevant? Powerless?’

Having African leaders and local NGOs directing conservation in Africa (and Asian leaders in Asia, and Latin American leaders in Latin America…) would mean better understanding and communication, as well as more trust. ‘It’s easier for me to convince somebody in a local community to stop doing something, like bushmeat poaching, than somebody from another country,’ says Kalema-Zikusoka, ‘where people just see them as an outside visitor and think, “They’re only interested in the wildlife. They don’t care about us.” Rather than being the ones implementing the work, those big international NGOs should support local initiatives. It all has to work together.’

Why I matter
The limits of Eden