The photos, facts, and politics of Chile. 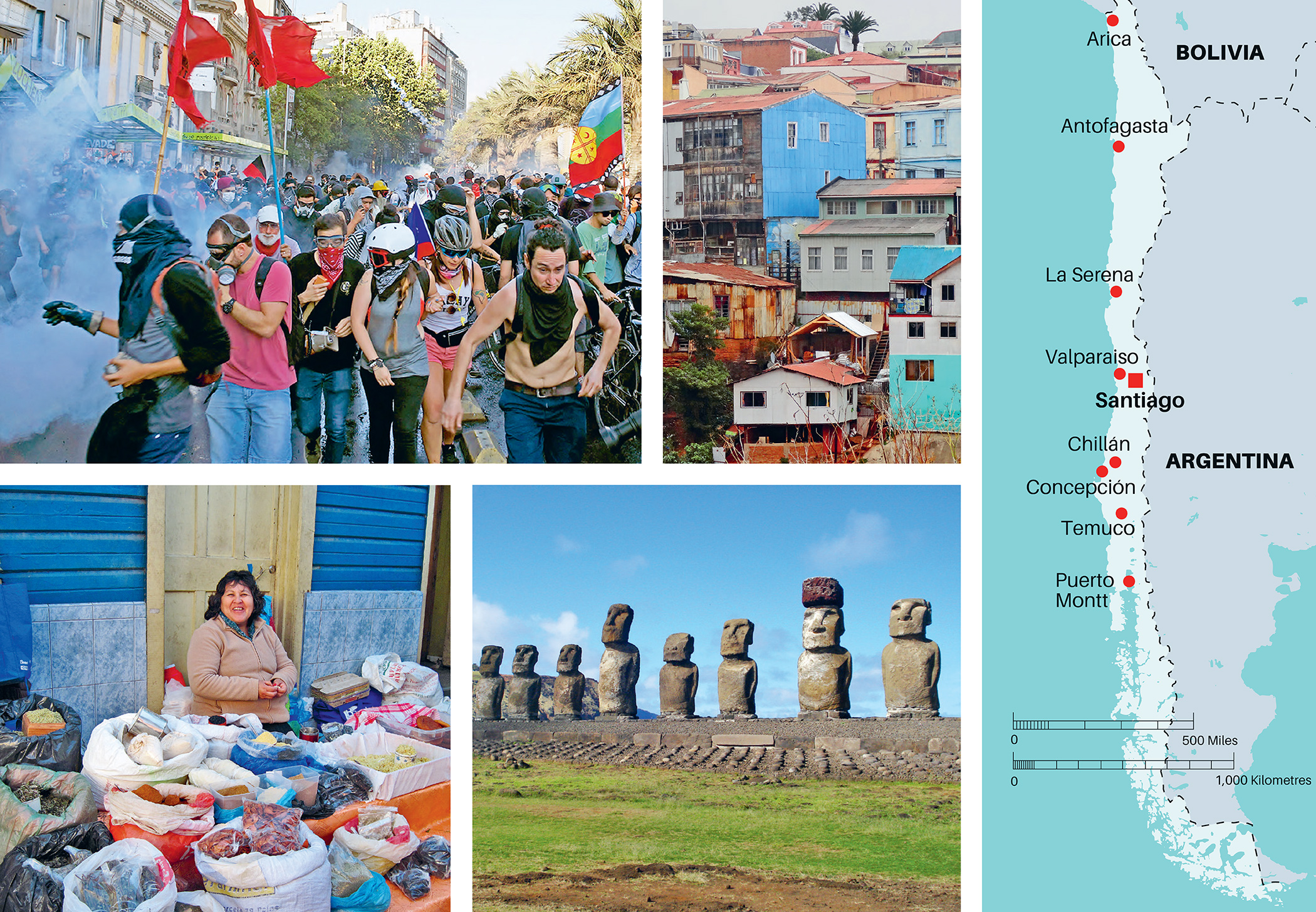 Photos (clockwise from top left): police fire teargas canisters at protesters during the December 2019 demonstrations; houses in Valparaíso, one of the South Pacific’s most important seaports; the moai figures on the Isla de Pascua (Easter Island); a market trader in the city of Lota.
Photos: Daniel Espinoza Guzmán

At the centre of Chile’s capital, Santiago, lies Plaza Baquedano, named after a now-discredited general whose statue was recently removed. Since October 2019 it has been widely known as ‘Plaza Dignidad’ (Dignity Square). What began as a protest by school students against a 30-peso fare hike on the metro exploded into a much bigger and broader revolt. The intensity of the resistance led President Sebastian Piñera to decree a state of emergency and deploy troops, but protests spread like wildfire to many of Chile’s cities.

On 25 October more than a million people gathered in Plaza Dignidad to demand not just Piñera’s resignation but also the revoking of the controversial constitution established by the dictator General Augusto Pinochet, who ruled with an iron fist from 1973 to 1990. Just as the socialist president he deposed in a coup, Salvador Allende, had drawn the attention of progressives the world over, Pinochet made Chile a proving ground for neoliberal economic policies, with the result that inequalities have been entrenched and widened.

Despite Chile’s reputation as one of South America’s most prosperous economies, most citizens have not shared sufficiently in the country’s material progress, and instead pay among the world’s highest rates for basic social goods, including healthcare and university education.

At the end of the Pinochet regime a period of hope ensued, with the election as president in 1990 of Patricio Aylwin, a centre-right politician from the Christian Democrat party. But the transition to democracy was hampered by conditions set by Pinochet in his constitution, including impunity for members of the junta (the navy, air force, army and police force). To date most of the 4,000 people who ‘disappeared’ under the dictatorship are still unaccounted for and those responsible for their fates have yet to face justice. 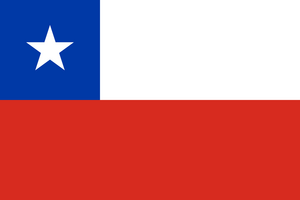 During the administrations of ‘centre-left’ governments, including those led by Michelle Bachelet (2006-10 and 2014-18), some small reforms were pushed through a senate stuffed with Pinochet supporters, but even these have since been rolled back by President Piñera, a staunch conservative who is the brother of Pinochet’s labour minister.

Current distrust of Chile’s establishment can be traced back to successive governments failing to challenge growing social inequality and institutional impunity – hence the rallying cry at the 2019 protests was ‘it’s 30 years, not 30 pesos’.

The October revolt failed to bring down President Piñera but it did eventually force him to institute a reform process. In 2020 a plebiscite approved the idea that a convention should be elected to rewrite the constitution and in May 2021 the electorate sent a clear message to the establishment when it elected the 155 members of that convention. Piñera’s rightwing coalition Chile Vamos won only 37 seats, while independent, centre-left and leftist candidates secured a total of 101 seats between them.

The potential implications for Chilean politics and society are huge – and not just in terms of economic inequality. Half the seats were reserved for women, and 17 for indigenous representatives. This holds out the hope that progress can at long last be made on reproductive rights and also on acknowledging the rights of indigenous inhabitants, including the Mapuche, who live in the south and make up around 10 per cent of the population and yet have never been officially recognized.

The next two years are vital as Chile bids finally to rid itself of Pinochet’s toxic legacy. The government’s inadequate response to the coronavirus pandemic and failure to provide a basic income, instead forcing people to cash in their pensions, has crystallized people’s resolve to push for big social changes.

Leader
President Sebastian Piñera
Economy
GNI per capita $15,010 (Bolivia $3,520, United States $65,850)
Main Exports
Metals form the largest export category (roughly a third of all exports) including copper (raw and refined) and lithium. Fish products, chemical wood pulp, wine, and fruit are the other main exports. Despite its socio-political stagnancy the country grew 7% a year on average between 1985 and 1997. Today its average annual GDP stands at $307.9 billion, thanks to its varied export portfolio.
Monetary unit
Peso (CLP)
Population
18.95 million. Annual population growth rate 1.8%. People per sq km 25 (UK 275). Around 12% are indigenous, with the Mapuche making up around 84% of the total.
Health
6.2 deaths per 1,000 live births, 71,000 people were living with HIV in 2019.
Environment
Chile is the longest country in the world and has seven sub-climates, stretching from the driest desert in the world, the Atacama, right down to the icebergs and fjords of Patagonia. Aggressive mining, forestry and fisheries are wreaking havoc on the environment. The so-called ‘sacrifice zone’ in coastal towns Quintero and Puchuncavi suffers from air pollution and toxic waste dumping. Carbon emissions 4.7 tons per capita (US 15.5).
Religion
Most are Christian with an estimated 60% Roman Catholic and 15% Protestant. The Mapuche practise their own religion centred around their cosmovision.
Language
Spanish is the official language while Mapuzugun and Quechua are spoken by indigenous people.
Hdi
0.851, 43rd of 189 countries (Bolivia 0.718, US 0.926).

Income Distribution
lthough Chile is among the top 30 wealthiest countries, it is chronically unequal, with the wealthiest 1% earning 33% of income. The gap between the wealthiest and the poorest is 65% wider than the OECD average. The coronavirus pandemic has seen poverty levels increase from 8.1% to 12.2%.
Literacy
96% – but public spending on primary and secondary education is among the lowest in OECD countries, at 0.5% of GDP.
Life Expectancy
80 years (Bolivia 72, US 79).
Position Of Women
Chile has a strong feminist movement, but much progress is needed to achieve parity. Abortion is still illegal. Prospects for women of all classes in the labour market are dim and the gender wage gap stands at around 45%.
Freedom
To protest in Chile means to risk imprisonment, maltreatment and sexual abuse. There are around 2,000 of the 2019/20 protesters still in jail. Reports of torture and sexual abuse have prompted international calls for the reform of the militarized police force. Freedom of expression has come under fierce attack. Media ownership is highly concentrated, and reporters have been targeted while covering demonstrations.
Sexual Minorities
Same-sex couples cannot marry or adopt, although since October 2015 same-sex couples and households have had equivalent legal protections. Chile is the only OECD country where the Penal Code establishes a higher age of consent (18) for homosexuals than for heterosexuals.
Politics
Despite its modern and prosperous image, Chile’s repressive institutions have remained intact since the Pinochet dictatorship. Human rights abuses continued through the 1990s and 2000s, mainly against students and indigenous people. Since 2019 Chile has remained in a military state of emergency with strict curfews. The political establishment consented to the constitutional convention thinking that the need for a two-thirds majority would make significant change impossible. That backfired, and the November elections could be among the most significant in Chile’s history.