When a winning smile is not enough

Beauty contests are now big business, but have lost their appeal for Lauri Kubuitsile in her latest Letter From Botswana.

When I first moved to Mahalapye in 1989, most Saturday nights, especially at the end of the month when everyone got paid, you would find a beauty contest at our community hall. It might be Miss Mahalapye or Miss Madiba (our local secondary school) or even something commemorating an event: Miss Independence Day or Miss Mahalapye Agriculture Show. It didn’t matter. These contests consisted of local young women putting on their best dresses, getting their hair done, and then parading around on stage to music at eardrum-splitting levels. The height and weight of the contestants were not important. The clincher was always the smile. If you had a good smile, you had a good chance. Judges were picked from local VIPs: people like ward chiefs, a councillor’s wife, or teachers. The winner won a blanket or an iron. After the formalities of the beauty contest were over, the night turned into what everyone had pitched up for – a disco.

But all of this changed in 1999. For the first time in history, Botswana sent a young woman, 20-year-old Mpule Kwelegobe, to the international Miss Universe contest. She got to the finalist stage and then was asked the question that sealed the deal – ‘Should Miss Universe step down if she should become pregnant during her reign?’ 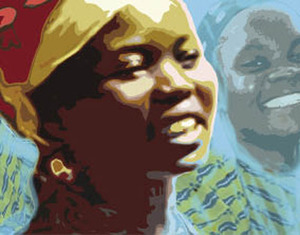 This was just about the best question to ask a young Motswana woman from a country that views all births, no matter inside or outside of marriage, as a blessing, and where it is estimated more than half of households are headed by women.

Her answer? ‘I think it should not in any way interrupt her duties; she should celebrate her femininity. Having children is a celebration of womanhood for all females, including beauty queens.’

And with that Botswana erupted into cheers of joy as Mpule was crowned Miss Universe 1999, and beauty contests in Botswana were given an adrenaline kick they haven’t yet recovered from.

Where they used to be casual affairs organized the afternoon before the event, they now became serious, with marketing budgets and big prizes. Miss Botswana winners nowadays win a car and a flat in Gaborone. The standards of beauty have changed too. Tall and thin is in and, though a smile is important, sadly, it isn’t going to win you a Mercedes Benz unless you have the other requirements.

In 2006, I was asked to be a beauty contest judge. We were living in the tiny village of Lecheng, where my husband was the head of the secondary school, and as his wife I was a prime candidate for the position of beauty-contest judge. I accepted reluctantly. It was for Miss Lecheng 40th Anniversary of Independence. It was a post-Mpule beauty contest so I expected the regular kind of thing, but as soon as the contestants walked on the stage, I knew something else was going on – at least, I hoped so.

The age range of the women was about 18 to 60. The weight and height range was just as varied. I realized then that these were the women from Ditshephe, a local traditional dance troupe. I’d seen them dance many times before and I had my favourite in the group, Thatayaone. She was about 30, with large breasts and an equally large bum, who, when not dancing, you might not even notice in her doek and letaise (headscarf and traditional dress with printed pattern). But once she began, you saw noone else. Her feet stamped across the dusty ground as if possessed; the entire time she smiled and she was transformed.

I hadn’t noticed her at first, not in the fancy dresses, mostly satin, in colours not seen outside of weddings. It was only when she put on her traditional dance uniform and she came stamping across the floor, her magical smile in place, that I knew my judging was done. She would be my winner, and across the form I gave her 10, 10, 10. We were back to those early days when the smile was everything. I was sure of it.

Sadly, in the end, my co-judges clung to the more Western standards of beauty, à la Mpule, and Thatayaone came third despite my best effort. Things had changed irrevocably and they weren’t going back.

Lauri Kubuitsile is the author of numerous books, primarily for children and teens. Her most recent is a collection of stories set in Botswana, In the Spirit of McPhineas Lata and Other Stories (HopeRoad, 2011).