Dan Hancox on the skilled young people who, after thirty years of Spanish democracy, are finding their options increasingly limited. 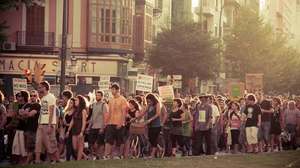 The economic crash has brought millions of Spanish people onto the streets.
Iñaki Pérez de Albéniz, under a CC License.

The crash has disproportionately punished Spain’s young people. At 30, Antonio is not in the demographic that has borne the brunt: the 16-24 year olds among whom there was 43 per cent unemployment a year ago, rising to 50 per cent, and most recently, 53 per cent. The numbers start to lose meaning when they follow so rapidly after one another. 800,000 empty homes. Five million unemployed. Eight million indignados on the streets, calling for ‘real democracy now’. Sixty-five billion euros ($84 billion) of cuts on their way.

These conversations have become perennial: a whole generation fixated on the question: ‘So where are you going to go?’

Antonio, like so many others, had returned to the family home, living with his parents and younger brother. The Ortiz homestead certainly felt cosy as we stretched out by their dining table, under which heaters took the edge off the relative evening chill of January. After a bit of family catching up in rapid, heavily accented Andalus Spanish, Antonio passed on the news to me in English. ‘So, my mother just got a call this morning: my brother has just lost his job. It was a big company as well. Just closed completely. He got one month’s notice.’ Antonio and his mum shrugged. She was knitting determinedly. It’s hard to be shocked when the statistics make stories like this so likely.

But the news hung over the table. An interminable TV talk show was rattling away in the background. Antonio’s older brother Manuel returned from work — he drives an hour each way to work as a primary schoolteacher — and gave me a friendly clip around the ear. He joined us, knees under the tablecloth, for a comforting bowl of beef and potato stew. As the family proceeded through an itemised list of everyone they knew who’d lost their jobs recently, Manuel did what I began to recognise as ‘the crisis sigh’: a unique expression which combines a slight eye-roll and a resigned half-smile. 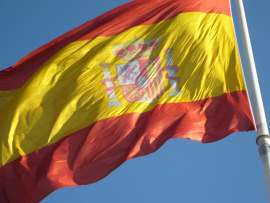 tunguska, under a CC License

What are people to do, I asked. ‘Leave’ he said, coughing up a chuckle. Manuel’s friends were going abroad in droves. ‘Especially the graduates, people with lots of skills, you know? The only opportunities left in Spain are to work somewhere like Burger King.’ The brain drain takes people to Germany, to Britain, to North America. One cousin, for example, could only find the well-paid tech research work that she’s trained for in Canada, so she was heading there, leaving her friends and family behind. Antonio himself was considering prospects in France (where he had a Spanish émigré friend), or Sweden (where he had a few tenuous work contacts), or Britain again [where he had already travelled for work]. ‘Don’t tell my mother I’m thinking of leaving again though’ he said in rapid, deliberately indecipherable English, smiling at her through gritted teeth. These conversations have become perennial: a whole generation fixated on the question: ‘So where are you going to go?’

Of course, these graduates, from Spain’s broad middle-class, are not at the sharpest end of the country’s deepening crisis. There is an undoubted privilege in being able to consider emigration as an option, to have an emotionally and spatially accommodating family home that will offer a fallback. These are the much-discussed graduates with no future, a group who were integral to the various global ruptures in 2011, and whose very existence suggests more of the same.

Perhaps this is a vision of the west’s medium-term future: itinerant human capital spreading out in a thousand directions at once

Spain’s young unemployed certainly do not lack the skills to sustain the country’s lunge into post-Fordist modernity. The fruits of three decades of social democracy since Franco are now mouldering in the heat. Forty per cent of Spanish 25-34 year olds have degrees compared to the EU average of 34 per cent. Yet few of them can find a way to use those qualifications in the country where they earned them. And so they are leaving. There are no official figures but several estimates put the number of graduates who have departed since the crisis began at around 300,000.

The great historical brain drains tended to emerge either from a dearth of particular skills in the destination country or from the persecution of a particular group in the country of origin, or both. Scientists left post-war Europe for America because of the skills gap in the latter, while 17th century Huguenots fled Louis XIV’s regime for their own safety and ended up starting what would become the South African wine industry. What’s happening in Spain looks altogether more ragged and unfocused. Perhaps this is a vision of the west’s medium-term future: itinerant human capital spreading out in a thousand directions at once, like an anthill hit with a spade, as outsourcing, automation, and the immutable rise of the global south leave an over-educated post-Franco generation with the skills to work everywhere and no opportunity to apply them.

This is an extract from an essay originally published Aeon Magazine. Twitter: @aeonmag