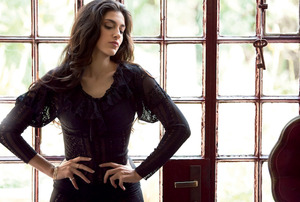 This is the album in which singer Mor Karbasi comes full circle in regard to her Sephardic musical roots. Born in Jerusalem, now living in Seville, Karbasi is steeped in the songs of her Moroccan mother (her father is from Iran). The statuesque young diva takes on her Ladino heritage – plus hints of flamenco and fado – with aplomb.

A ‘tzadik’ is, in Jewish tradition, ‘a righteous one’. For Karbasi, her titular ‘tsadika’ is the real-life Sol Hachuel, a young Moroccan Jewish woman who was executed in 1834 for alleged apostasy. ‘Sol la Tsadike’ (The Ballad of Sol) – like much of the material on the album – comes from traditional Moroccan Sephardic songs, although with some contemporary configurations. There is a raw quality to ‘Viva Ordueña’ (‘Long Live Ordueña’), with claps, percussion, far-off bass and slight ululations from Karbasi. The effect conveys a folky immediacy – the musicians are clearly having fun.

The best is saved for last. ‘Ay si te fueres a bañar novia’ (‘If you go to the washing of the bride’) begins with a tiny tinkle of bells, followed by high, piano intervals and finally a lovely sketched accompaniment. Karbasi’s voice swoops and soars over a melody that transcends boundaries and could as easily be from an Irish séan nos tradition as a Sephardic one.

A father and son class act from Toumani and Sidiki.

Class acts don’t get much better than this. It’s well known that kora maestro Toumani Diabaté descends from a 700-year-old dynasty of Mandé griots and that his father, Sidiki, was the musician who brought the kora, the West African 21-string harp, to a wider audience with an important record, Mali: Ancient Strings, over 40 years ago. Now a new release, beautifully and sparely recorded in London, poses the latest intergenerational dialogue between Toumani and the junior Sidiki, a 23-year-old who, when not transmitting the kora to new listeners, runs a Bamako studio where he makes beats for hiphop star Iba One.

There is a no fluff here, just the pure and poetic play of two kora melodies weaving around each other. It’s a lovely and balanced conversation in which old Mandé tunes are weighed against ones that sound more contemporary, such as the slow and lilting ‘Claudia and Salma’. Toumani is no stranger to musical conversations – his albums with the late guitarist Ali Farka Touré are rightful classics – and the generosity that he has always brought to interpretation is evident here. The full range of Toumani’s technical virtuosity is one shown in all the arpeggios that scurry up and down the album’s 10 titles. There is elegant, marvellous wit, but different moods arise in contemplative pieces such as ‘Lampedusa’. This is peerless music, looking both backwards and forwards in Mali’s artistic traditions. Given the threat musicians face from fundamental Islamists, especially in the north of the country, this is a poignant and timely album.