The Trans-Pacific Partnership: let's not work together 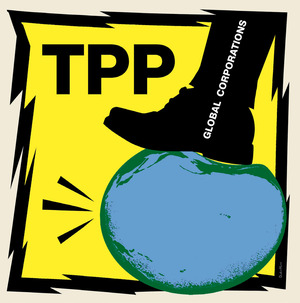 Let’s end partisan squabbling and find common ground. Let’s bridge the ideological gulf and work together to solve the problems that face us all.

Do these pleasing sentiments sound familiar? Rarely has a politician emerged who hasn’t voiced a rhetorical call to join hands, overcome differences, or otherwise bask in the glow of togetherness.

Of course, there’s a catch: if coming together means having elected officials unite to push corporate interests at the expense of the 99 per cent, it’s hardly a unity worth achieving.

Back in 2007, when Barack Obama was still a freshman senator making an improbable run for the White House, I went to see him campaign in Iowa. He had some good lines in his stump speech – invoking his past as a community organizer, reiterating his opposition to the Iraq War, pledging to close Guantánamo, and vowing to ‘tell the lobbyists that their days of setting the agenda in Washington are over’.

Yet, even then, Obama’s more progressive instincts seemed at odds with his clear affection for banalities about reaching across the aisle. The latter served as a warning sign that he might follow the path of past neoliberal Democrats – politicians who joined with conservatives to roll back social protections and reward Wall Street.

Fast forward to 2015. Obama’s presidency is entering its last act. Facing a hostile Congress, he has undertaken some noble initiatives: announcing, for example, far-reaching executive action on immigration. Yet, in the name of bipartisanship, he has also veered far from his 2007 insistence that he would commit himself to ‘taking power away from lobbyists’.

A prime example of this shift has been his promotion of the Trans-Pacific Partnership, or TPP. The 12-country trade deal would bring Pacific Rim countries from Japan to Chile together with the US in a new trading block (as the Transatlantic Trade and Investment Partnership, TTIP, threatens to do with Europe). Time magazine has called it ‘potentially the largest free trade agreement ever’. Yet the terms of the shadowy pact are unavailable to the public. Moreover, Obama is pursuing ‘fast track’ negotiating authority, which minimizes Congressional oversight and allows only a final, up-or-down vote.

We know – if only from leaked information – that the TPP has much in common with previous trade agreements written largely by business insiders. It includes provisions allowing corporations to sue to undermine public interest regulations. Oil companies have used such measures to attack environmental laws, while financial firms are employing them in an attempt to gut restrictions imposed after the financial crisis.

Advocates of internet freedom have charged that the TPP would enforce corporate copyright claims at the expense of fair use and free expression. Doctors Without Borders likewise opposes the deal, warning that measures inserted on behalf of pharmaceutical giants would ‘restrict access to generic medicines, making life-saving treatments unaffordable to millions’.

Cobbling together a coalition of neoliberal Democrats and plutocratic Republicans to pass the TPP might technically count as fostering bipartisanship. But it’s hardly a case of creating widespread unity among the American people.

In truth, corporate globalization has been a hugely divisive issue, unpopular with major constituencies in both parties. In 2005, the vast majority of Democrats in the House of Representatives voted against the Central American Free Trade Agreement (CAFTA). White House operatives were able to squeeze it through Congress on an extremely narrow vote of 217 to 215, but only after what the New York Times described as ‘intense pressure from President Bush and House Republican leaders’ on members of their own party.

In that case, the Times noted, ‘business groups… lobbied fiercely in favour of the trade pact’. They are expected to do so again with the TPP, using influence garnered through campaign contributions that have generously transcended party affiliation.

If this is what working together looks like, I’d say we need more acrimony.

Obama has chosen the wrong issue on which to embrace collaboration. The TPP is bad policy. And some ideological divides don’t deserve to be bridged.

Argument: If you care about climate change, should you have children?
Abortion wars on brand new shores