Dying for the things we love

'And all men kill the thing they love, By all let this be heard, Some do it with a bitter look, Some with a flattering word, The coward does it with a kiss, The brave man with a sword!'

A century on from Oscar Wilde’s immortal poem The Ballad of Reading Gaol, death comes gift-wrapped and perfumed, in beguiling guilt-free varieties, delivered with a toothy smile and prophecy of material salvation. Betrayal gets absolved as the consumer age supplants conscience with craving, and duty with self-devotion. Even with our beloved Earth and the future of humankind balanced on a knife’s edge, our killing feels strangely like a bargain.

Aimed squarely at the things we love, today’s big guns pound away from under the camouflage of normality. Greed, discontent, false needs and compulsive desire deal a mortal kiss. Anything still breathing can be clubbed with bloated egos, inflated expectations, grandiose entitlement and a near-zero attention span. 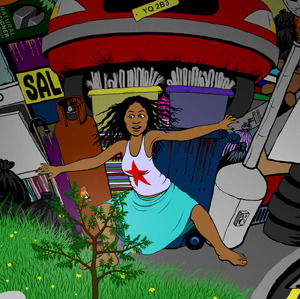 In his book Escape from Evil, cultural anthropologist Ernest Becker describes consumer culture as a second-rate religion that has programmed a society of ‘cheerful robots’ to martyr all to ‘a grotesque spectacle of unrestrained material production, perhaps the greatest and most pervasive evil to have emerged in all of history.’

With business-as-usual in the face of multiple global emergencies – climate change, global warming, habitat destruction, extinction of species, loss of biodiversity, pollution, deforestation, land degradation, ocean depletion – it is hard to miss the evil, or at least the madness. Spreading poverty, growing inequality, the commercialization of children, collapsing mental health, the ‘death of mind’, the obesity epidemic, and so on – with a culture like that, who needs enemies?

If consumer culture were a separate individual and assessed psychiatrically, its diagnosis would be criminal psychosis of the most fiendish variety. But since its lunacy is agreed upon, we lap it up.

Like psychopathic dung beetles, we let future generations pay as we roll up the latest cultural excretions, coming away with everything except the love that faded as life became a romance with the appetites. In a system that hawks selfishness, vanity and exhibitionism, we become easily excited with the fake orgasm of trappings and tantalizations. Once sold on ourselves, we can be wooed by the most impoverished of ambitions, from ‘having it all’ and ‘living the dream’ right on down to ‘making it to the top’.

Conformity usually reassures, even when a culture is morbidly sick. What makes our rampage so titillating is that it is bound up with cultural heroism. Excess, over-indulgence, over-consumption, dandyism, stylish indifference – all part of the act, all trumpets of conquest, prosperity, success and ‘being somebody’.

Positivity-peddlers are working overtime, but the big picture is sobering. Consumerism and predatory capitalism are not viable long-term organizing principles for a society. Our myths about progress, superfluous wealth, limitless expansion and endless resources are formulas for global ruin. Hyper-competitive individualism is a lonely straitjacket that fuels frustration, alienation and rage. Freedom has cheapened into a demeaning free-for-all in a prison of petty wants. As a springboard to happiness, emotional health and social wellbeing, ‘the good life’ is an exhausting flop.

While cultural norms are by definition ‘normal’, they are by no means always sane and healthy. The term ‘cultural insanity’ refers to normative templates that have become so counter-productive and self-defeating, or so misaligned to our basic human needs, that they stand to undo society or its life supports. In fact, normality can be the deadliest of foes.

All human cultures milk illusion for purposes of control and motivation, but never before has a society indebted itself so heavily to unreality. As our unreality bubble ruptures, we find ourselves in an endgame with all-or-none stakes that can only be won by way of a radical and upsetting utopian transformation. Many utopian blueprints have been floated over the ages but, for the first time, Utopia is a matter of life or death. Getting it half right – or even mostly right – is not enough. Idealism and reality have converged. Utopia is becoming serious business.

The Buddha called for a spiritually advanced society that imbued depth of character and full aliveness by way of selflessness, harmony with nature, liberation from worldly desire, and contemplation about truth and reality. Renaissance utopian Sir Thomas More preached for a morality-centred society with no money, no private property, a six-hour working day and no need for lawyers. Sir Francis Bacon’s New Atlantis recounted a cultural Eden that endowed all members with ‘generosity and enlightenment, dignity and splendour, and piety and public spirit.’

For cultural psychologist Erich Fromm, the only defence against our all-consuming social insanity was ‘a radical change of the human heart’. In his 1955 book The Sane Society, he detailed a utopian model called Humanistic Communitarian Socialism, to be overseen by a ‘supreme cultural council’ comprising lofty hearts and minds like Albert Schweitzer and Albert Einstein. As the last great public figure to brave a utopian vision, Einstein felt that our best chance of surviving our sociotechnical system, which he equated to ‘an axe in the hand of a pathological criminal’, was an entirely new global order that united all nations under a single ministerial authority representing the ‘common moral community of humankind’, as he termed it in his 1946 essay ‘Towards a World Government’.

But, by the middle of the 20th century, we had largely given up on utopias beyond those which could be consumed or ogled. Easier to swallow were anti-utopian scenarios such as George Orwell’s Nineteen Eighty-Four and Aldous Huxley’s Brave New World as they mirrored our heartless compliance in the face of indomitable manipulation. More recently, we recognize in films like The Matrix and The Truman Show our phantasmagoric world of factory-farmed experience that keeps us blankly suckling on fantasy, and numbed to life beyond our brainwashing.

Traditional hopes must be surrendered if consumer culture is not to fulfil its destiny as history’s greatest evil. Democracy, now a corporate puppet show starring politicians as grandiloquent eunuchs and us as fools, no longer allows for true leadership. Technology, compromised as it is by the profit motive and soaring demand for distraction and techno-trance, is as much an axe as an answer. God, increasingly hell-bent on wanting us to be rich, is resisting the green makeover that some prayed could spare Creation. Mere ‘education’ about impending doom barely dents our cultural programming.

The highest act of love in a criminally insane society is disobedience. In his essay ‘On Disobedience’, Fromm warns: ‘At this point in history, the capacity to doubt, to criticize and to disobey may be all that stands between a future for mankind and the end of civilization.’ Normality can no longer be trusted. Unconditional obedience is an unaffordable luxury.

But ‘humanistic disobedience’, as Fromm calls it, requires a fully developed conscience, something rare in a culture pushing narcissism and moral stupor. Because of its unethical design, consumer culture also factors in a predictable amount of disobedience. Its only real vulnerabilities are the same weapons of mass persuasion conjured by our pinstriped soldiers of fortune.

If consumer culture were an individual and assessed psychiatrically, its diagnosis would be criminal psychosis of the most fiendish variety

In his 1928 book Propaganda, Edward Bernays writes: ‘The conscious and intelligent manipulation of the organized habits and opinions of the masses is an important element in democratic society. Those who manipulate this unseen mechanism of society constitute an invisible government which is the true ruling power of our country.’

Despite its ominous title, there is nothing inherently sinister about propaganda. Intensive use of it was made in the lead-up to the American Revolution, and some of its leading patriots, including Samuel Adams and Thomas Paine, are still ranked among history’s most praiseworthy propagandists.

Economics, once the boring background affair it should be, is now the cornerstone for cultural consciousness. Thus we play along as commercial tacticians execute a propaganda regime so potent that children are ‘branded’ by the age of four and adults fall victim to ‘consumption disorders’, youth fixations and over-entertainment syndromes. So why are we not deploying similar strategies to rally a revolution that could reverse our death march?

Technically, it is possible. For the same price as the insanity-saving ‘credit crunch’ bailout, we could be well on our way to a society of minimalists, naturalists, humanitarians and debt-dodging vegetarians. Compassion could be chic, and conservationists sexy. Throw in half a year’s military budget and peace could be hip, education could enlighten, and eloquent simplicity could be all the rage. Fashion, fame and flag-waving could be absurd. The ‘beautiful people’ could be beautiful people. As in Zuni culture, winning could be for losers only.

Culture and mind are infinitely flexible. There is nothing that we cannot be or believe. We are as perfectible as we are corruptible. The problem is that consumer culture is inextricably wedded to the insanity bedevilling the world. It would haemorrhage from all spheres if saddled with scruples and principles. Real solutions are unthinkable for elected ‘leaders’. The licence to use propaganda on a mass scale stays in the hands of those with the least conscience. All others are fingered as conspirators or budding tyrants or, if necessary, applauded into submission.

Despite everything, the collision course upon which we find ourselves is marshalling a new generation of utopians. Still in the wings, they speak in different voices to the goal of a post-consumer culture founded on socially, ecologically and existentially sustainable values and lifestyles. While it would be a spectacular leap of maturity on our parts, the deliberate and pre-emptive management of collective consciousness guided by a responsibility-based science of culture is the next and most important step in our evolution. Nature has lost patience with our illusions. Time is no longer our ally. The Age of Idealism has forced itself upon us.

Utopia or bust – that is the endgame. In reality, we gladly die for the things we love.

John F Schumaker is a clinical psychologist and author of In Search of Happiness: Understanding an Endangered State of Mind (2006).