Together, the monarchy and the military hold tightly to the reins of power in Thailand. With little sign of popular resistance, Jo Eckersley wonders if this is likely to change. 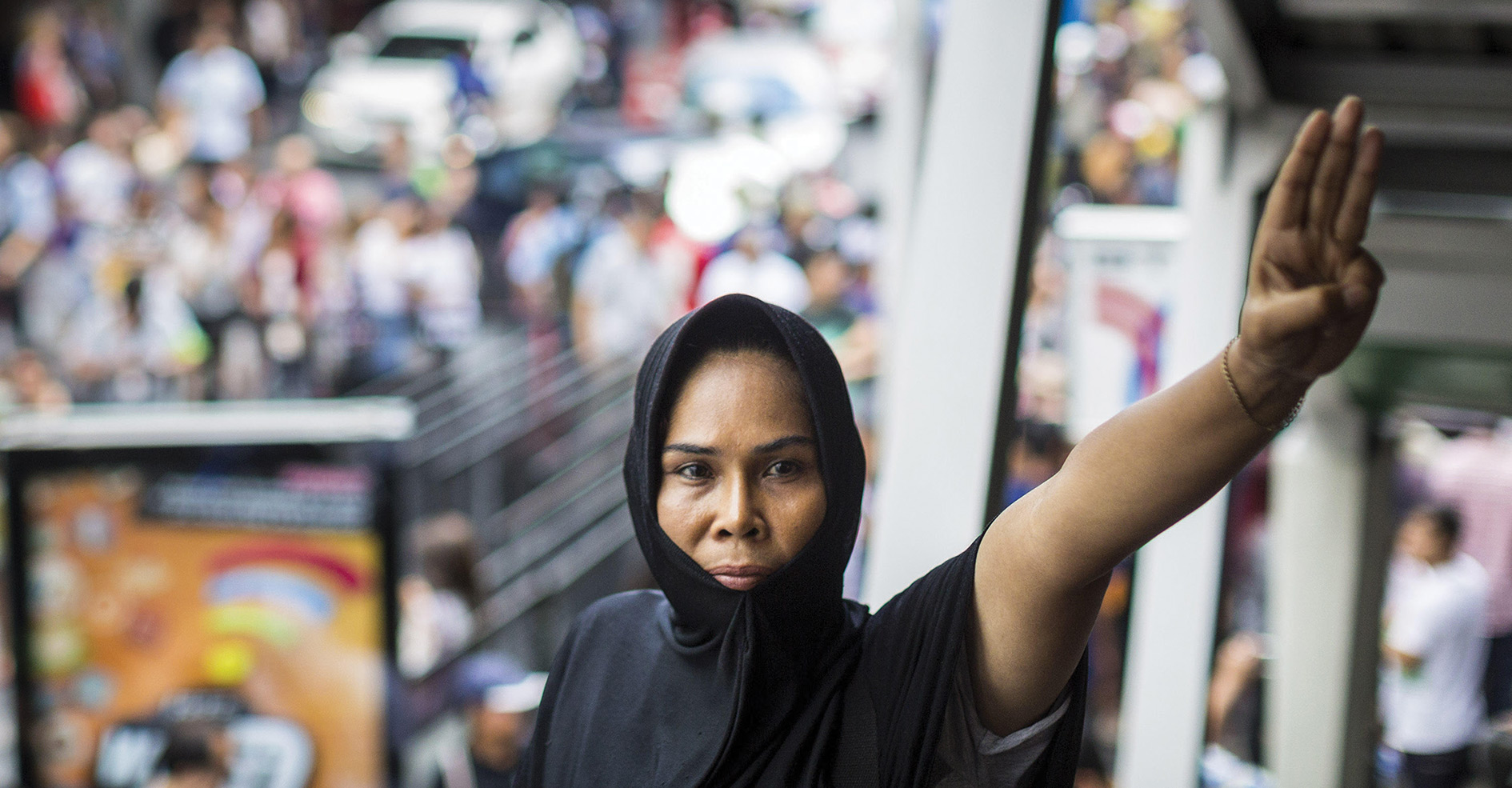 Farewell, democracy: using the Hunger Games’ three-fingered salute, which represents thanks and goodbye to a loved one, a Thai woman marks the perceived end of democracy in her country.
Photo: ZUMA Press, Inc./Alamy

The military set up a checkpoint opposite Saowanee Alexander’s workplace last year, shortly after the coup. The makeshift four-poled tent over the road from Ubon Ratchathani University is staffed by five or six conscripts each day. They patrol the campus in a pickup truck, eventually taking their leave at midnight.

Saowanee doesn’t see it as a ‘serious’ checkpoint. Rather, ‘they want to let us know that they are here, and make us feel their presence’.

Since the coup on 22 May last year, Thailand’s military government, the National Council for Peace and Order, has really started to make its mark on everyday life in the Southeast Asian country.

The military are in the streets and on the TV, and they have started joining the police in clamping down on petty crime. In July last year tourists on Patong Beach were surprised to see 100 troops making their way down the sandy stretch to evict vendors who were – as the district chief explained – ‘blocking the beach’.

The military have even made it into the national school curriculum. Children are required to learn and recite a list of 12 traditional ‘core Thai values’, written by the country’s Prime Minister, former general Prayuth Chan-ocha.* Just to make sure they are remembered, the government has released a special set of online stickers.

The Prime Minister holds a weekly address to the nation called ‘returning happiness to the people’, which he uses to make it explicitly clear what he expects of the country’s 67 million citizens. They often fail to live up to his expectations.

‘They censor everything that they think is not right or is not proper for Thai people, like we are so clean and well-behaved. It’s so wrong,’ said Rangsan.

When Nattanan Warintarawet, a high-school student, launched a campaign against the 12 core Thai values, the Education Minister seemed genuinely shocked. ‘From 1 to 12, these values are flawless,’ Narong Pipatanasai told local media. ‘If the imposition of the 12 values is wrong, we have to see if those [opposing this] are abnormal.’

To make sure they avoid awkward situations like this, the military have become proactive. Ten days after the coup, Saowanee and some colleagues at the university were called in by a group of high-ranking officers. ‘They basically asked us not to engage in political activity,’ she said. ‘I don’t know what they meant by this. We asked if it was a demand or if we would be followed. They said no, they were just asking us if we could co-operate. They were very courteous, actually.’

Saowanee consciously chose to ignore this request for self-censorship, and she remains vocal, but there is one thing which she doesn’t feel safe talking about: the King.

Thai values continue to be reinforced by the state. But they often come into conflict with the reality of modern Thailand

King Bhumibol Adulyadej, 87, plays a pivotal role in Thai politics despite his advanced years. The law stipulates that his honour is so important that no-one should defame or insult him, or the monarchy in general. The offence is called lèse majesté, and the punishment is up to 15 years in jail. Previous cases suggest that it is no defence if the statement in question is in fact true.

Giles Ji Ungpakorn, an academic from Bangkok, was charged with lèse majesté in 2009. He learned that his trial would be held in secret, and the outcome was ‘done and dusted’ before it had even taken place. Within a month he left his friends, his home, his job, and moved to Britain.

‘I was charged eventually with eight counts of lèse majesté,’ he said, ‘and I could have been put in prison for 10 years for each of them. The prisons are barbaric, medieval.’

He later found out a member of staff from where he worked had spoken to the authorities after reading his book A Coup for the Rich. The characteristically authoritarian Thai state encourages its citizens to inform on each other: last year a young woman was accused of lèse majesté by her own parents. Despite this, Giles doesn’t believe the monarchy is dominant.

The reds and yellows

‘Most people don’t understand that the King is actually very weak,’ Giles explained. ‘All the things that they think indicate the King’s power could be said of Queen Elizabeth in Britain; it’s just a formality. But the way in which the monarchy is used by the military – that’s different.’

The monarchy and the military have a cosy relationship with each other which dates back to Bhumibol’s earliest days as King. In 1957 Field Marshal Sarit Thanarat instigated a coup – 1 of 12 successful coups in the past eight decades. Communism was growing in the region, and Sarit organized for the King to tour Thailand, visiting the rural borders of the country and consolidating a sense of national identity.

Jong Sricharoen is from Loei Province, on the northwest border with Laos, where it is ‘normal’ to have a photo of King Bhumibol hanging in your house. ‘People in my area believe in the King,’ she said, ‘because a long time ago he came to the area, which is in the countryside, a very small village, and brought development projects.’

Michael Montesano, co-coordinator of the Thailand Studies Programme at the Institute of Southeast Asian Studies in Singapore, sees these tours as calculated military manoeuvres. 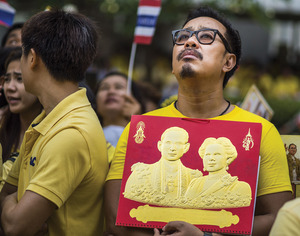 Supporters of the King gathered outside his hospital when he was admitted last December. The monarchy, still revered by many, is considered beyond reproach.
Photo: Jack Kurtz/Zuma Press/Press Association Images

‘[Field Marshal Sarit] decided that he would legitimatize the sort of dictatorship he wanted to build by investing it with the trappings of Thai culture, and he worked very deliberately to return the monarchy to a central, symbolic and legitimating role in Thai society. Thai culture was essentially recreated from 1958 onwards,’ he said.

Today, Thai values continue to be reinforced by the state. But they often come into conflict with the reality of modern Thailand, which is in many ways liberal and diverse. Rangsan thinks attitudes to the sex trade are uniquely strange.

‘Thais are the most hypocritical people in the world,’ he said. ‘This is the best place for sex tourism but we don’t accept that in every corner of the city we have prostitution. We don’t accept what we are.’

What Thailand’s values are, and what they should be in the future, are subjects of intense disagreement. There is bitter division across the country, but nowhere more so than between the red- and yellow-shirts.

Yellow is the colour of the King, but the yellow-shirt protest movement didn’t grow out of support for him. Rather, it grew out of hatred for former Prime Minister Thaksin Shinawatra. The first formal yellow-shirt organization, the People’s Alliance for Democracy (PAD), was established in 2006 in opposition to Thaksin’s leadership.

The PAD hated Thaksin for a number of reasons, but corruption was regularly cited. The PAD was made up of ‘early winners in Thailand’s post-1985 economic boom’, according to Michael Montesano, and many saw Thaksin’s progressive, socially inclusive policies – such as a universal healthcare programme – as a threat to their economic status.

Elections confirmed that he was a hugely popular figure. For the yellow-shirts, it naturally followed that those who were voting for Thaksin were ill-informed.

Tyrell Haberkorn, an expert in Thai cultural politics working at the Australian National University, is blunt about the reason why the yellow-shirts do not support democracy: ‘The view in certain parts of the elite is that some people are simply less human.’

The PAD took to the streets and shut down Bangkok in 2006, and Thaksin’s government was ousted.

As he was being deposed, supporters of democracy rallied. The red-shirts, mainly made up of people on lower incomes, were united by Thaksin much like the yellows. And they were equally passionate.

In March 2010, leaders of the red-shirt’s United Front for Democracy Against Dictatorship (UDD) made a call-out for donations of 1,000 pints of blood from supporters, which were thrown at the government’s headquarters. A month later, a brutal military crackdown – led by none other than Prayuth Chan-ocha (the current Prime Minister) – resulted in the deaths of 90 red-shirt protesters.

Fast forward to 22 May last year and history repeated itself.

It was Groundhog Day for Thailand as the military took over, having forced another Shinawatra prime minister out of office a few weeks beforehand – this time Thaksin’s sister Yingluck. Since then, although ‘people actually do want resistance’, according to Giles, the siblings – who are both in exile – have made it ‘very clear that they don’t want any mobilization’. The UDD leadership has largely followed their instructions.

The lack of organized opposition has left the streets quiet. Although martial law was lifted in April this year, the received wisdom is that this was a cynical attempt to placate the international tourist trade, as many insurance companies refuse to offer packages to countries imposing martial law.

In the short term, there isn’t much hope for the red-shirts jailed over the last decade. Saowanee and her friends set up a fund to give 2,000 baht a month – about $60 – to the families of four Ubon Ratchathani protesters who were sentenced to 34 years in jail for arson in 2011.

The law stipulates that the King’s honour is so important that no-one should defame or insult him, or the monarchy in general. It is no defence if the statement in question is in fact true

‘It’s very disheartening to see them in prison,’ she said. ‘There’s one woman – she’s only in her early twenties – and the last time I was talking to them she said she has had to let it go, let it be.’

Saowanee isn’t hopeful for the future: ‘I just want to see how bad things get at this point, how bizarre things can be. Nothing right now surprises me at all. If it didn’t affect our lives we would be laughing the whole time.’

Will the status quo continue? The prospect of gradual change seems unlikely given recent history. Even if the military call a new election down the line, what’s to stop them from taking it away again when things don’t go their way?

A likely catalyst for change will be the death of the King. Rangsan sees this as a ‘critical time, as the Crown Prince will have a lot of problems’. Crown Prince Vajiralongkorn was already the subject of private gossip over his personal life when, in 2002, he was financially linked with Thaksin Shinawatra in a media report.

Without the King as the ultimate legitimizer, it may be easier for the whole of Thailand’s populace to see the state as it really is: a naked military dictatorship.

What should we stand for?
Safe but not free