The freedom of the city

Trust between communities is being rebuilt, writes Ruby Diamonde. 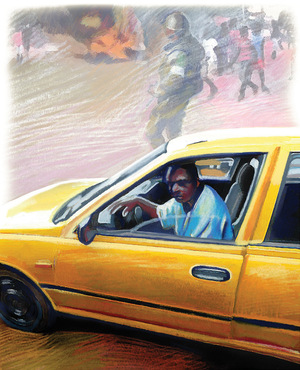 I am trying to drink my morning coffee in peace. But the taxi touts just outside the café are bellowing for trade. Yellow public taxis converge in front of Café Phoenicia here in Bangui’s small centre ville all day, and the touts compete to herd passengers into taxis as fast as possible. I tut and shake my head and gulp my coffee down quickly (at moments like these I realize how English I still am). As I rise to leave, one of the touts screeches out the name of a local destination that stops me in my tracks for a moment.

If you were to ask Bangui-ois (as many residents here describe themselves) which was the most dangerous district in this capital city, I bet that 90 per cent would immediately say Cinq Kilo. Its name means ‘five kilometres’ which is, more or less, the distance from the Oubangui River to this concrete neighbourhood of traders built around Bangui’s biggest market. At Cinq Kilo you haggle over clothes, pans, mattresses, motorbikes, medicine and cheap, good quality fruit and vegetables – and until very recently hand grenades that cost just half a US dollar each. The Central African Republic (CAR) is saturated with small arms.

Cinq Kilo is home to the overwhelming majority of Muslim communities in Bangui, who used to make up some 15 per cent of the five-million-strong population of CAR. This densely packed urban ghetto of mud streets is also infamous for its local ‘self-defence committees’ – vigilante gangs of armed young men controlled by commanders who claim to defend residents from outside attacks, but have often committed their own appalling violence.

When Seleka rebels stormed Bangui and seized control of CAR three years ago, many (though not all) of Cinq Kilo’s Muslims supported them. Seleka were Muslim led and Central African Muslims say they had experienced years of institutionalized discrimination, mainly from Christians. As one local resident put it to me, ‘When Seleka first arrived, we thought it was our turn to have power.’ But Seleka’s indiscriminate violence repulsed communities across the country, and they were driven out of Bangui by another rebel movement, the anti-Balaka, led by men claiming they were ‘liberating’ CAR from Muslim extremism.

As these two movements fought it out, Cinq Kilo became a no-go zone of fire-bombed streets and shops. Rebels, the self-defence committees and other local criminal gangs retaliated against each other, leaving burnt-out bodies in the streets. Thousands of Muslims fled. Aid workers pulled out, other local residents stayed away, and drivers of the yellow public taxis refused to go there. I have long-standing friends in Cinq Kilo, Muslims and Christians, and I won’t ever forget driving there in my scruffy little grey car when, apart from UN Humvees and tanks, we were the only vehicle on the streets.

Throughout 2015, UN peacekeepers worked hard to secure Cinq Kilo, and gradually the market began to revive, though it was still volatile. Muslims told me they were frightened of leaving the enclave even for centre ville, for fear of being attacked, and did not dare wear traditional Islamic robes. When Pope Francis came to Bangui at the end of last year he paid a fleeting visit to Cinq Kilo, receiving a rapturous welcome. It galvanized the CAR government and UN to try to ensure that all Bangui-ois could move across their city safely. The yellow taxis now drive there during daylight hours and are usually packed.

But the real change that I’ve seen these past few months has been from the inside. I arranged some discreet meetings with youth from the anti-Balaka, where one said to me, ‘Madam, we have done many bad things, and we’ve gained nothing. We need to regain our Muslim brothers’ trust. This war between us has been for nothing.’ Meanwhile Cinq Kilo residents’ support for the self-defence committees has drained away as people see they have also been part of the problem. Muslims and Christians now mingle more.

Bangui is still a dangerous city and Cinq Kilo can still be edgy: I always call someone before driving there, just in case. But the road has stayed open.

I recently smoked a cigarette with a driver of one of the yellow taxis. ‘It was not the rebels, the Pope or our government who freed Cinq Kilo,’ he said to me. ‘It was us Bangui-ois. This city belongs to all of us, and you know we all lost too much before we realized that.’