Five years ago in New Internationalist 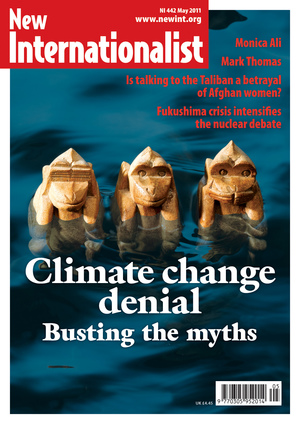 The longevity of New Internationalist magazine – four decades and counting – is such that this column can of course revisit magazines that predate awareness of climate change. The early NIs were not short of awareness of environmental issues but the first central theme on global warming was not until April 1990. Looking back now, it is almost as if one big black cloud in the shape of threatened nuclear devastation during the Cold War was immediately replaced by another in the shape of looming climate chaos and its terrifying implications.

From its earliest days, the NI saw one of its most vital roles as being feeding its readers with the arguments they could use in the workplace, bar or coffee shop to persuade others of the need for change. To that end a regular feature was the Myth Exploder. So when, five years ago this month, we devoted our central theme to debunking the myths propounded by climate deniers, it was part of an honourable tradition.

I wish I could say that popular awareness of the issues had advanced so much in the interim that such a service is no longer needed. Instead, sadly, all of the myths are still out there being daily propagated in bar-rooms, blogs and radio phone-ins. Refresh your own arsenal of arguments with which to challenge them at nin.tl/counteringclimatedenial