Five reasons not to buy BP’s story about the end of its sponsorship deals. 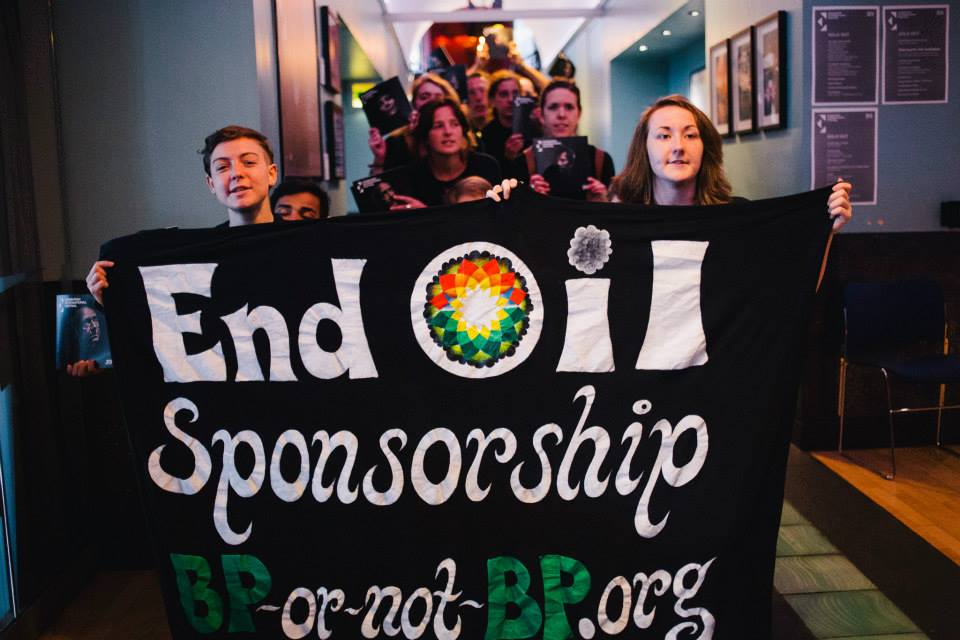 In the last month, BP’s high-profile sponsorship deals with the Tate art galleries and the Edinburgh International Festival (EIF) have come to an end. BP claims that this has nothing to do with the growing levels of protest against its sponsorship of culture and is instead down to a ‘challenging business environment’.

Here are five simple reasons why you shouldn’t believe that for a second.

1 The amount BP gives to the arts is loose change for an oil giant
Despite the slump in oil prices, BP is still one of the richest companies on the planet. In 2015, it made $5.9 billion in profit. We know from Freedom of Information requests and BP’s own statements that the amount they gave Tate ranged between $200,000 and $700,000 per year. This is less than 0.5 per cent of Tate’s annual income – and for BP, it represents the amount of profit it makes every single hour.

The Edinburgh sponsorship, meanwhile, is believed to have been worth as little as $14,000 per year. The idea that these kinds of sums would present any kind of meaningful saving to an oil giant – particularly one that’s just given its CEO a multi-million-dollar pay rise – is simply laughable.

2 Arts sponsorship gives BP enormous value for money
A 30-second advert in an X-Factor final can cost up to $350,000. For the same amount of money, BP was able to purchase an entire year of high-profile branding, kudos, public support, and exclusive events from one of the country’s most famous art galleries. If BP was just trying to save money from its marketing budget, it would be pushing for more arts sponsorship, not less.

3 Arts world professionals think BP’s reason is a joke
Shortly after the Tate and BP admitted they were parting company, I attended an event called Show Culture Some Love. This brought together artists, museum curators, cultural workers and their union representatives to discuss how to defend arts funding in uncertain times. In front of a room full of cultural professionals, I raised my hand and said: ‘BP tells us that it’s ending its Tate sponsorship because it can’t afford it any more – do you think this is the real reason?’ Even before I’d finished the question, a ripple of laughter had run around the room. On the stage, Dr David Fleming, the president of the Museums Association, leaned forward and said: ‘It’s clearly nothing to do with BP’s finances. Somebody, somewhere was being mortally embarrassed by the campaign – in the Tate, at BP, or both.’

4 BP is desperately trying to hang on to its remaining arts sponsorship relationships
The programme for the current production of Les Blancs at the National Theatre features a full-page BP advert on the back page, proudly trumpeting the oil company’s sponsorship of venues such as the Royal Shakespeare Company and Royal Opera House. This isn’t the behaviour of a company that’s preparing to quietly dump its cultural partnerships. It looks a lot more like an attempt to reassure its remaining arts partners that it still wants to purchase their services, and to build as much public support for its remaining funding deals as it can.

5 BP’s sponsorship is only ending at institutions where it has faced significant protests
BP is a prolific sponsor, slapping its logo on everything from the Paralympics to Alaskan teachers to Hull City of Culture 2017. It even sponsors Student Pride, and a corporate version of International Women’s Day. If BP were shrinking its sponsorship budgets, we’d expect to see these partnerships vanishing left, right and centre. But instead, it says it has chosen to withdraw from the Edinburgh Festival – which hit the headlines last year when campaigners staged two performance protests and a major festival star spoke out against the deal – and Tate, where creative interventions from groups like Liberate Tate and Platform have been building huge support from artists and art-lovers over the last six years.

So why are BP, Tate and the Edinburgh Festival claiming that the reasons behind these decisions are purely financial? The simple answer is: it’s the only thing they can say. To mention the bad publicity these deals were garnering would be to admit that the campaigners had won, which both the company and the institutions are understandably loath to do.

Of course, if BP really has jumped rather than being pushed, then it could well be for business reasons – just not the reasons it claims. When your sponsorship deal is generating more bad publicity than good, then it’s just not value for money any more. When BP talks about a ‘challenging business environment’ it is probably talking about the Art Not Oil coalition’s headline-grabbing protests and interventions.

Oh, and have you seen the line-up for this year’s Edinburgh Festival? It looks fantastic. So much for the arts needing oil money to survive.

If you’d like to join the call for oil-free arts and culture, sign this petition calling on the British Museum to drop BP, and check out this ‘disobedient exhibition’ of BP-related objects at historyofbp.org.

Danny Chivers is a member of theatrical action group BP or not BP?, and author of New Internationalist’s No-Nonsense Guide to Climate Change and NoNonsense Renewable Energy