TTIP fatally wounded, but its ‘ugly brother’ is still a threat 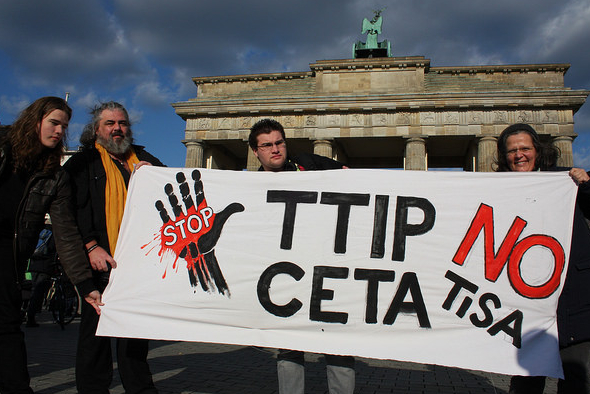 Could things get any worse for TTIP? On Monday the hugely damaging leak of consolidated texts confirmed exactly what everyone had feared about the deal, with all its massively pro-corporate provisions on display for everyone to see. And then the following day the French government launched one of the most high profile attacks on TTIP that’s ever been seen.

Whether TTIP survives these body blows is debateable, but it is almost fatally wounded.

Francois Hollande, the French president, is lagging in the polls and his threat to block TTIP could be seen as a gambit to shore up some votes. But it is a reflection of the popular mood in the country, where the media’s negative reporting on TTIP has soared in the past fortnight. Hollande said at a conference that he could not accept ‘the undermining of the essential principles of our agriculture, our culture, of mutual access to public markets.’

France’s lead trade negotiator, Matthias Fekl, now thinks talks will be halted. He argues that the EU has bent over backward to offer the US what it wants but the generosity has not been reciprocated.

This is reflected in the leaks which hit the headlines on Monday. The leaks contain indications that the EU’s precautionary principle (not allow things on the market until proven safe) may be sacrificed in favour of the US so-called ‘scientific principle’ (don’t ban anything from sale until it is proven dangerous).

The news from France is already causing arguments and tension in the European Commission. The UK camp will be livid, with David Cameron having previously claimed that TTIP was his own idea. Last year he announced that he wanted to put rocket boosters under the negotiations. I suspect next week he’ll be wanting to fit stabilisers.

There is a danger, however, in framing TTIP as a battle between the squabbling components of the EU and the US. TTIP is essentially a means for the corporate world to impose its agenda on the rest of society. Negotiators on both sides are doing the bidding of a highly effective and resourced corporate lobby, and it is only the continent-wide resistance of ordinary people that is causing them problems.

While TTIP may be on the ropes, we still face a grave danger from CETA – also known as the TTIP’s ‘ugly brother’ – to as a similar deal that’s a lot closer to being ratified and implemented between the EU and Canada. CETA is effectively a backdoor to TTIP, with any US corporation operating in Canada able to exploit its provisions to sue EU governments should they take decisions that may impact on expected profit margins.

The council could agree on 'provisional implementation' for CETA – a process which allows the European Commission to bring trade deals into effect before national parliaments have had the chance to debate – and reject – an international treaty. This means that the vast majority of CETA could be legally binding as early as next Spring, long before the British parliament has examined the deal. This includes the now infamous corporate court system.

In other words, a corporate case could be brought against the British government before Parliament has ratified CETA.

If TTIP is truly on its knees, we need to double our efforts to prevent this similarly toxic deal from being ushered in through the backdoor.

Tell David Cameron that at the Council of Europe meeting in June, he must insist that the UK gets the chance to decide on toxic trade deals before they are implemented.

A version of this article originally appeared on the website of Global Justice Now.

The Panama Papers: a podcast special
Impeachment of Brazil’s Dilma Rousseff is a setback for the whole country