Pt 1/3: A British-Syrian’s experience of a refugee's journey 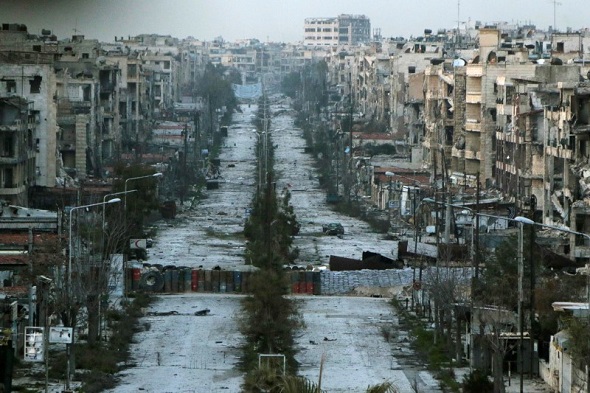 The reality of civil war and migration rips identity apart while exposing new hope in humanity, writes Danny Ryan Youssef in part one of this three part blog series. Skip to part two.

As a British-Syrian who grew up in London I have enjoyed the benefits of being influenced by two fantastic cultures. I had a childhood not too dissimilar from any other British schoolboy. As a child I was interested in the simple pleasures of football and fun. I was never overly popular but I had a small group of friends and was generally happy. However, I remained confused about my own identity. Every summer, and occasionally at Christmas, my family and I would spend a month or two in Syria, and it was then that my alternate life would begin. I spent my time with a different set of friends who thought and behaved differently; an extended family with more conservative values than my immediate family and a lifestyle poles apart to the one I lived in London. I loved it. I spent my days messing about with my plethora of cousins, visiting my dad’s old village in the mountains, or by the beach where my sister and her friends felt perfectly comfortable wearing a bikini alongside others in a hijab.

With these two different lives I was unsure to which culture I truly belonged. As time passed and I matured I realized that in truth I belonged to both. I was as British as the next guy: I would scream for England at the World Cup, hold my hand to my heart when singing the national anthem and retain the same liberal views as any friend or neighbour. On the other side, with the guidance and wisdom of my parents, I realized that this sense of belonging did not exclude me from my connection to Syria. I loved my family in Syria deeply, I believed in (most) of the strong Syrian family values, and I enjoyed the Syrian way of socializing as much as the British. That is, until the Syrian civil war began to brew. 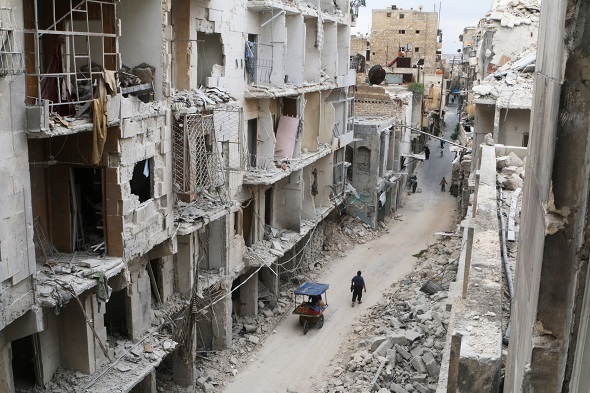 From that day onward I never returned to that beautiful country, and I fear I never shall. I went through University attempting to avoid any conversation concerning Syria and began to repress the happy memories associated with it. Occasionally these would surface and I would realize that the homes we ran around in, the homes we played soldiers in, were now rubble. At these times I am not ashamed to say that I wept. I was fortunate enough to have a British girlfriend at the time who could empathize with me and helped me come to terms with my sense of loss. Despite this I began to distance myself from Syria as a kind of defence mechanism. I became a colder person as a result. I would see my mother, a very strong woman, an NHS doctor, crying over events and attempt to comfort her. But I couldn’t bring myself to empathize with her as my now ex-girlfriend had done with me.

As time passed I began to forget; and I was happy to do so. My life was going well; I had achieved a good degree, had a close group of friends, and found myself in a high-paying job that allowed me to travel. I continued in this state of illusionary contentment until September 2015 when, by sheer coincidence, whilst on holiday I found myself in Budapest’s Keleti railway station surrounded by the grim consequences of the Syrian civil war. 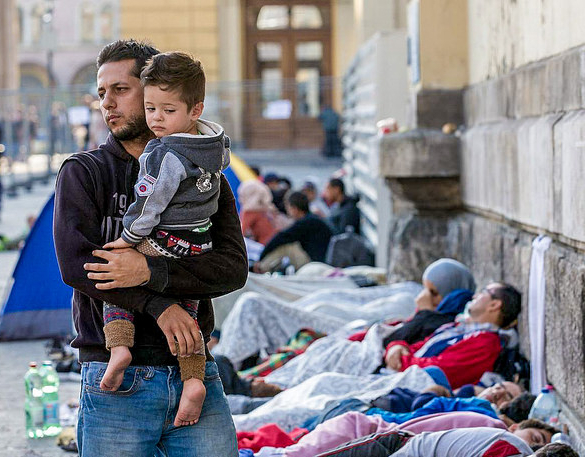 Migrants sleep outside Keleti station, which remains closed to them, on Sept. 2, 2015 in Budapest, Hungary.
Photo: Freedom House

Like many other tourists who had heard about events on the news, I had gone to Keleti train station to donate some goods before finishing my holiday. Once there it took me a moment to register what I was seeing: a full blown transit camp in a modern European train station. The bizarreness struck me first: hundreds of tents pitched outside modern shops and restaurant, Commuters tip-toeing over sleeping children. Then I began to notice that these exhausted people spoke with the same accent as my family and I, that they were from the same places that we were from and that despite outward appearances we were in fact the same. As I stood there bewildered by the scene I noticed a small girl running to a food stall wearing the pink coat I had donated. I felt an uncharacteristic rush of emotion. I went over to speak to her, she was very shy, her name was Nour, she was from Idlib and she was hungry. The kind people at the food stall gave her as much as she could carry and she wandered off to find her family. The people at the food stall noticed that I spoke to Nour in Arabic and asked if I could help them out with the distributions. I agreed and spent the next day working there, becoming increasingly overwhelmed with emotion as I spent the time talking to scores of refugees.

Almost everybody passing through Keleti station was trying to get to Germany, men, women, children and whole families. It was chaos. Everyone knew that the passage to Europe wouldn’t last forever and no one wanted to miss their 'golden opportunity'. They came from a variety of backgrounds: from big cities like Damascus and Aleppo, to small rural villages not unlike my father’s in the mountains. Some came with lots of belongings; others came with nothing. I started to realize that this wasn’t just one group of people fleeing, it was an entire nation, my nation, crossing all demographics, generations, genders, professions and personalities. 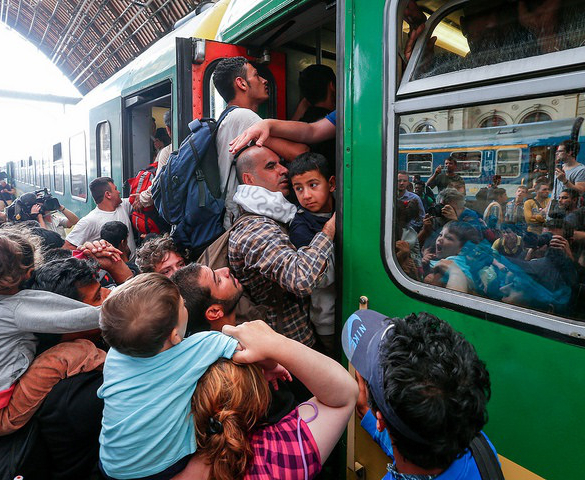 Refugees storm into a train at the Keleti train station in Budapest, Hungary, September 3, 2015 as Hungarian police withdrew from the gates after two days of blocking their entry.
Photo: Freedom House

In Keleti I witnessed the kindness of people as well as the cruelty. One family that had just arrived had done so with nothing but the clothes on their back. The father had his son on his shoulder, his wife was carrying the youngest in a sling whilst holding her eldest daughter’s hand. They were trying to get to Vienna in order to cross into Germany. It was getting late and the last train was about to go. The team at the food stall banded together to ensure the family made it. We located train tickets, packed them as much food as possible, pointed them in the right direction and told them to run. It wasn’t until the last moment that we thought to ask them if they knew what they were going to do once they got to Vienna. ‘No’ was the answer, but the train was about to go and the father was adamant that they were getting on it. They began to move and the team started to frantically search for some warm clothes in case the family ended up on the street in Vienna. A colleague took off his black hoody and tan jacket and gave it to the family. They tried to say no, but to no avail. They couldn’t stop thanking him but they didn’t have to, the gratitude was etched onto their face. My colleague didn’t want any thanks he just told them to turn around and run.

To match this kindness there was cruelty. A group of three young teenagers arrived at the food stall, one girl and two boys, looking utterly distraught. The young girl was silently sobbing into the shoulder of one of the 15-year-old boys. They had just been robbed by the police who guarded the stairs that led up to the main platforms. The policeman threatened to arrest them if they didn’t give him what they had. Between all three of them they had $1,140 to get them through the journey and start a new life in Europe. Another day, in another scenario, I would be sceptical of a story like this, but it was clear looking into the teary eyes of these kids that it wasn’t just a story. There was very little we could do, and there was no way any of us could approach the police. The boss of the food stall managed to get a few hundred dollars together from some generous individuals, but nothing could repair the damage that goes with being persecuted and intimidated by a figure of authority.

The overwhelming sense I got from the people passing through was that they were decent human beings. Honest, kind and unassuming people who had reached this end through no fault of their own. Speaking Arabic with a Syrian accent meant most of the refugees felt as comfortable speaking to me as they would to one another. The remarkable thing was that despite the horror that they had been through, the vast majority still had a sense of humour. The kids were still cheeky, the parents still wanted the best for their family and the young people were bright and ambitious.

The people I came in contact with in Keleti were no different from those I had known all those years ago when Syria wasn’t just a war zone. The memories I had repressed for so long started to return. Memories of playing basketball by the sea with my Syrian friends and talking about our ludicrous life ambitions in the local cafés. Most of all I started to think about all of the family members whose love I had enjoyed for so many years, and how wretched and cowardly I was to distance myself from them when things got tough.

Skip to part two. The third and final part of this series will be published next week.

Is Cambodia’s skyscraper dream a nightmare?
Pt 2/3: A British-Syrian’s experience of a refugee's journey