Is Cambodia’s skyscraper dream a nightmare?

The building work currently going on in Phnom Penh may also reveal the inadequacies of the country’s ‘progress’, writes David Hutt. 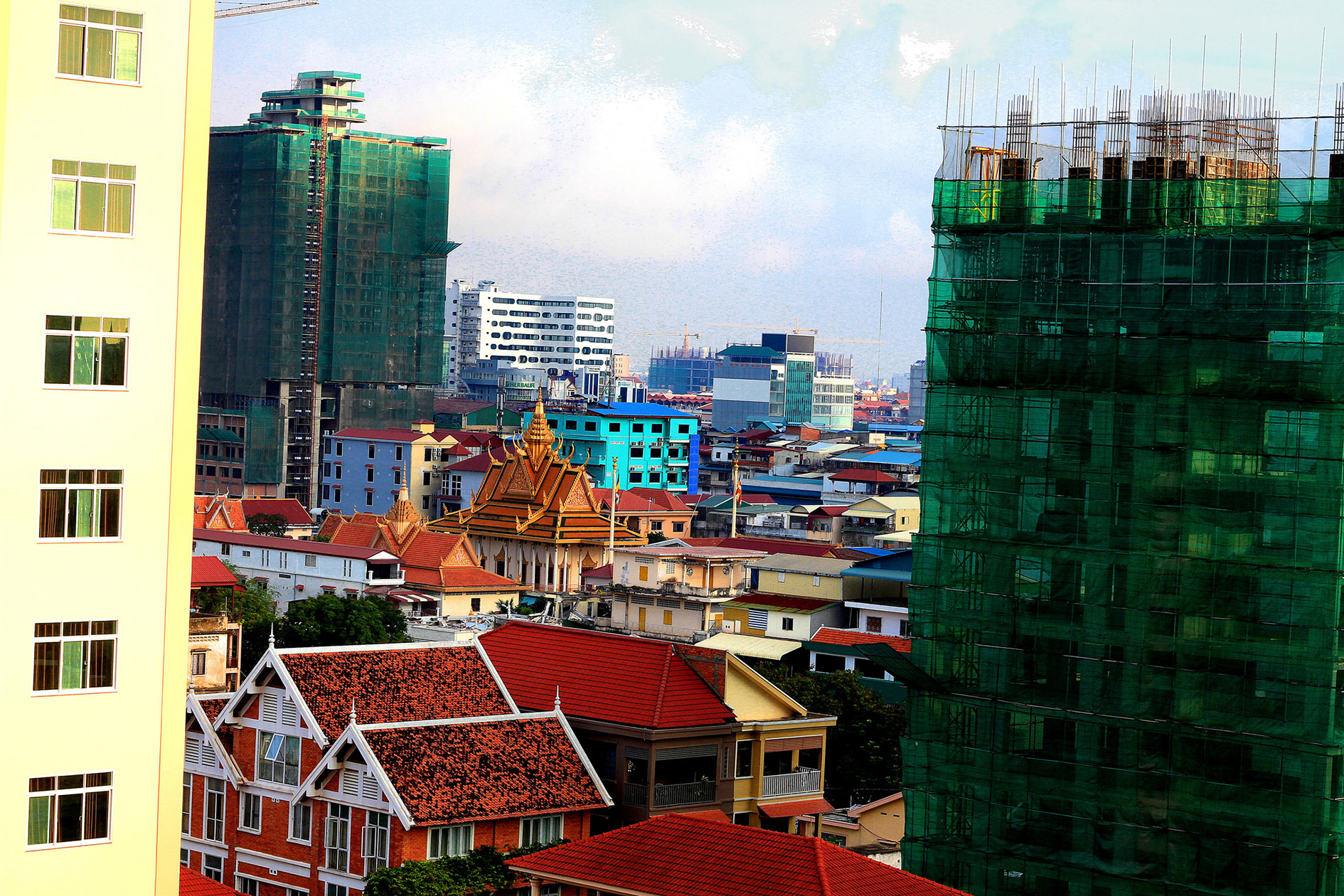 When it was announced Tuesday 3 May that a 133-storey twin-towered skyscraper received government approval to be built in the centre of Phnom Penh, Cambodia’s capital, I was reminded of Oscar Wilde’s description of the man who ‘knows the price of everything and the value of nothing’.

I have nothing against skyscrapers per se; the aesthetics of some can be agreeable, although most are not, and they have come to typify our ultramodern, urbanised times – the inference of our cities ‘shooting up’ betrays a great deal about addiction to a toxic economic system. However, I do take issue with what skyscrapers represent, which is nothing but a pure, self-serving statistic.

However, as to the why, there was scant evidence. This is because most modern skyscrapers rarely lack a why. They might provide office space or housing, but rarely do they offer what is genuinely needed – although capital must always find ways of producing more capital. This is especially true in Phnom Penh, a city that, by most measures, really does not need a 133-storey skyscraper.

Some might disagree with this, but it is hard not to notice that in the past decade alone 628 high-rise buildings – those in excess of five storeys – have been built in Phnom Penh, while the number of condominiums is expected to increase by 641 per cent by 2018. A brief walk around the city in the evening will reveal that the windows of many are not illuminated. The current tallest edifice, the Vattanac Capital tower, had an occupancy rate of just 30 per cent, as of mid-2015. Industry experts have expressed concern about a possible downward trend in the property industry in the coming years. And then there’s the fact that most inhabitants of Phnom Penh earn somewhere between $6 and $8 a day and, by my own rather incomplete calculations, rent of the average high-rise flat starts around $400 per month and many are in excess of $1000 per month.

But, returning to the point, the actual why of the Thai Boon Roong Twin Trade Center – as the Phnom Penh skyscraper will be called – is the 133 storeys. If completed it would be the tallest building by far in Cambodia and one of the tallest in the world.

Tallest, and its immodest cousin, largest, are amongst the hollowest of all adjectives. Aside from egoism, there is no intrinsic value in being the tallest or largest of anything. The largest animal on the planet is no more interesting or complex as the smallest. The tallest human is as functioning as the average heighted. The Northern lamprey, a species of fish, has the largest numbers of chromosomes of any vertebrate at 174. But are humans any less valuable or complex with a poxy 46?

The British writer Will Self once put it that, ‘a skyscraper is always a big swaying dick vaunting the ambitions of late capitalism to reduce the human individual to the status and the proportions of a submissive worker ant.’ But unlike big swinging dicks, size is what matters for skyscrapers.

In our modern times, the skyscraper has become the embodiment of a nation’s economic prosperity and of the ‘moral’ health of a city. A city is doing well, the logic goes, if low-paid builders are trying to construct the next cloud-rimming edifice. This is the same in Southeast Asia as it is in London, New York and the Middle East. And, in doing so, the skyscraper has become yet another mere statistical epithet that actually reveals little about the condition of either the country or the city.

The same might be said of GDP – or, even worse, GDP per capita, which masterly deceives the unwitting observer into believing that wealth is equally shared in society. Even the Financial Times wrote that ‘GDP omits work done in the home, mostly by women. It values expenditure on war and nursing care on the same basis. It records the despoliation of the environment only by reference to the amount spent despoiling it, and then includes the amount spent to clean it up. It does not tell us how happy we are or how fulfilling are our lives.’

The companion of GDP growth, particularly in parts of the world like Southeast Asia, is the decrease in ‘extreme poverty’, a term that has erased all of poverty’s social, political and personal connotations, and is instead defined by the World Bank as living on less than $1.25 per day. (The elusively defined ‘moderate poverty’ is as living on less than $2 per day.) And because poverty has become a numerical concept, it can be quantified. Specifically, at 1.4 billion people in ‘extreme poverty’ globally, according to the World Bank’s 2008 census, and 2.7 billion in ‘moderate poverty’.

It also allows countries to quantify change. Cambodia, for example, reduced extreme poverty by more than half between 2004 and 2011, from 53 percent to 20.5 percent. Yet, as I wrote in New Internationalist in 2014:

This was big news for the government and business élites, a validation that their economic policies were in fact working and money was trickling down from the wealthy to the poor. However, less discussed were the same report’s findings that such statistics give an inaccurate picture of poverty levels. In actual fact, a loss of just $0.30 a day would have thrown an estimated three million Cambodians, or 20 per cent of the population, back into the World Bank defined [extreme] poverty.

Poverty, however, is not a mere statistical phenomenon, where one can transition seamlessly from being poor to post-poor. Poverty is surely an a posteriori experience that affects education, mental health, and physical health, amongst others things. A few more dollars in your pocket does not suddenly erase all of these.

But returning to skyscrapers, between 1998 and 2004 Kuala Lumpur’s Petronas Towers were the world’s tallest buildings, yet again a symbol of the Malaysian capital’s good health. However, as one commentator writing for the Huffington Post posited:

With all the towers’ publicity, it can be argued that the building pulled Kuala Lumpur out of geographic obscurity and helped brand Malaysia as a country with a bright future… [However] I believe the Petronas Towers are part of a well-executed scheme to convince the world that the country of Malaysia, as embodied by its capital, KL, is as modern and advanced as the towers themselves. Unfortunately for Malaysians and for investors, this simply isn’t true.

The monumental building work that is currently going on in Phnom Penh, a city cloaked in green mesh, of which the Thai Boon Roong Twin Trade Center is the latest in this self-aggrandising drive, might have the effect of pulling the Cambodian capital out of the Khmer Rouge’s continuing legacy – Cambodia being known to many around the world as a country of genocide, stuck in the late 1970s and not existing in the 21st century. However, it will also reveal the inadequacies of Cambodia’s ‘progress’.

In my opinion, Phnom Penh does not need a 133-storey skyscraper. What is does need is low-cost housing for the city’s poor. It needs a sustainable way of developing the capital, which doesn’t require the forced eviction of hundreds of thousands of inhabitants, the largest mass-movement from the city since the Khmer Rouge ‘evacuation’ in 1975. It also needs the formation of public spaces for the swelling urbanites to enjoy and, perhaps crucially, a long-term plan for urban growth rather than the opportunistic, piece-meal selling off of the city’s most important land to the highest bidder. Only then, once these factors are achieved, can the city’s health truly to determined.

Life in an Indian slum
Pt 1/3: A British-Syrian’s experience of a refugee's journey